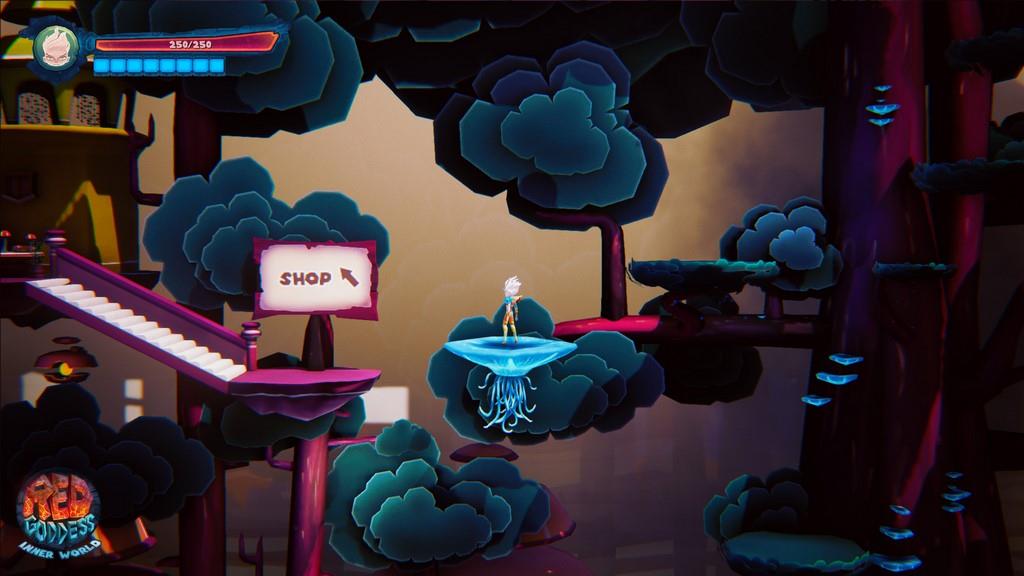 Red Goddess is unfortunately one of those games that seems like it has tons of potential. A game that you want to love, but all of the problems prevent that from ever happening. There are times when there is plenty of fun, but often times, you are gonna want to smash your controller. It's a real shame because the game has decent platforming and an interesting premise. Platforming can be fun at times, but then it gets annoying. Nothing is more annoying than traversing up a level and falling all the way down due to iffy controls. What it all comes down to is a great game that is sadly ruined by a bunch of technical problems.

The main character of the story is Divine, a goddess who has completely lost her memory and must travel throughout the world to recover said memories. Throughout the game, Divine will do battle with her own mind as she recovers red crystals to get her memory back. Throughout the story Divine is guided by a ghostly figure, who strangely looks like Divine herself. No spoilers here but it's pretty obvious who the ghostly figure is if you are paying attention. Slowly we get to see Divine's memories play out on screen. Aside from a narrator who chimes in from time to time, there is no voice acting in the game at all, so it's hard to care about the story when almost everything takes place in text boxes. At first I started to read the story, but then I just became so uninterested that I found myself just skipping the text. The same can be said about many of the NPC's that you will encounter around the village.

I will say this, the visuals of Red Goddess are absolutely beautiful. The world is full of fantastic art and vibrant colors, as opposed to a lot of games these days that have to be dark, gritty and only use black and browns. The other good thing is that the platforming is good, which obviously is the most important thing about a platforming game. Unfortunately, it's everything that surrounds the game that ruins it. For one, Divine can only advance to new areas via picking up red crystals. This means that you will be doing some backtracking and you will find yourself seeing the same areas over and over again just to get enough crystals to get to a new area. Thankfully the game does include a map which shows you where all the crystals are and where your next objective is, but traveling from area to area isn't that exciting.

As for combat, Divine's fights mostly with melee attacks, and for a platforming game, even these attacks seem really dully. There is really no excitement in combat here and there were even times when I just wanted to skip combat all together because I didn't want to deal with it. All you really need to do is punch, dodge, punch dodge, punch and dodge. It gets incredibly dull and fast. You can transform into two other forms, Rage and Fear, later in the game. You will need to transform to advance through areas. If you see red rocks blocking your way, Rage can destroy them. When blue rocks are blocking your way, Fear can destroy those. There are also color coded enemies as well which you need Rage and Fear to defeat as well. When in Rage or Fear transformations, Divine does have some other attacks such as fireballs but they aren't enough to break up the monotony. 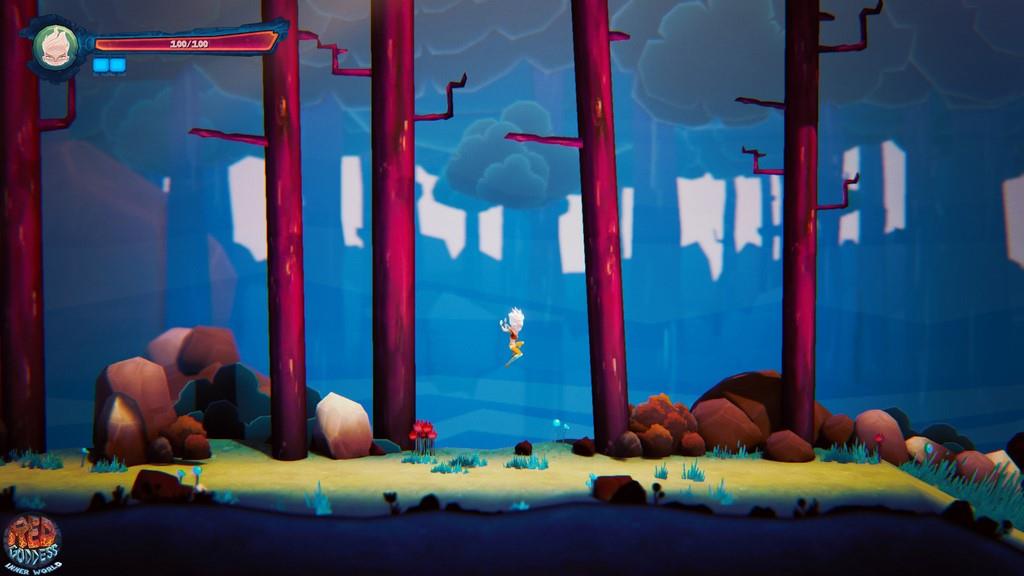 There is a shop in the game when you can increase your health and mana bars, which are helpful at first, but as you get further into the game, you will find that your health bar is pretty useless. This is because you will run into a gauntlet of rotating platforms and spike pits that kill you instantly. Hope you have tons of patience because you will begin dying over and over again. Yes I know platforming games are supposed to be a challenge but this is more frustration than anything. Jump off a ledge and can't see anything below you? You are probably gonna land in a spike pit. Again, I have no problem with a challenge, but this is just cheap and frustrating especially when you have to wait to respawn over and over again. Sadly, there are also technical issues as well. I missed a jump and instantly died due to framerate issues and I have had the game crash on me at least once. It also crashed right before I hit a checkpoint, forcing me to replay part of the game.

I wanted to love Red Goddess, I really did. Once I started the game, I was in love with the visuals. They are gorgeous. Sadly, the more I played, the more problems started to show up, and the less I wanted to play. It got to the point where it felt like playing the game was becoming a chore and I never want to feel that way when playing a game. Just when there are moments where the game shines, something ugly rears it's head and ruins the experience.

Red Goddess has beautiful visuals and an interesting rage and fear transformation system. It had potential, but sadly, a great game is buried under a pile of problems.