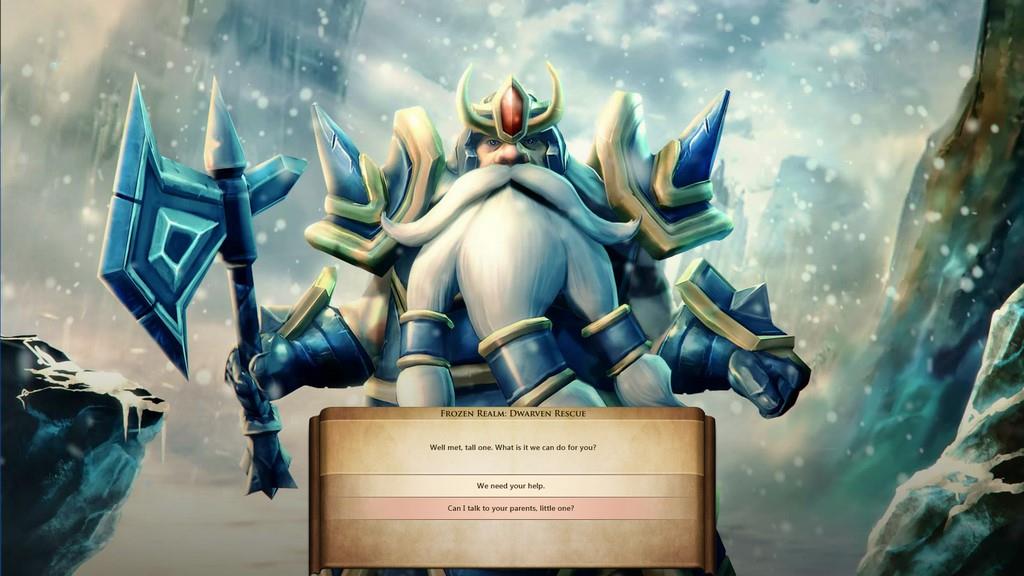 The backstory is that a while back this guy named the “Sorcerer King” took over this world. There were many battles and much was laid to waste, but he won. You are part of a remnant of unreconstructed rebels against his rule. It is as if the King had played (and won) a 4X game on this map before you got there. Now you have to pick up the pieces and stop his complete victory before he drains all the life from your world.

While the King is busy recovering from the previous war it is your job to marshal forces against him. There are other factions left over from the previous game, but they are suspicious of your attempts at resistance. You will need to convince them that you have a chance at victory, or they will join the King and become your enemies.

The basics of gameplay will be familiar to anyone who has played the fantasy-themed turn-based strategy games such as “Heroes of Might and Magic” or “Master of Magic”. You start with a single, small, city, barely able to build the most basic of units and buildings. Your magical powers are no better. Even your lone hero is more of a bully than a great leader. Meanwhile, the Sorcerer King is amazingly powerful. During the game he functions as an off-screen presence without much direct impact. From time to time he will stop by and threaten your feeble attempts, or possibly offer some help if you'd just do this one little (incredibly evil) thing he wants done. Most of the time his presence is felt through the Doom Track, a bar at the top of the screen that fills in red. When the Doom Track is completely full the game is over and you have lost. It fills for a variety of reasons: doing the Sorcerer King's bidding, performing an evil action while on a quest, or just as time passes. You also have opportunities to roll it back by performing meritorious acts or gaining a reputation for virtue.

The player functions as a disembodied guiding force, capable of some direct action, but mainly working through heroes and cities. The last war has left treasure and monsters scattered around. You will need to send your hero out with some cannon fodder – er, support troops – to slay the monsters and take their treasure. This provides experience points, raw materials, and magic items to make your armies more powerful.

In addition to finding magic items, they can also be crafted in your Forge. Given the right scrolls and ingredients, you can create custom items that allow you to outfit your hero(es) and armies just the way you want. City growth may be rather linear, but unit equipment provides more room for customization.

It is not just monsters and treasure out there, however. There are also peasants and librarians and other assorted common people who are having problems they need you to solve. This takes the form of text-based descriptions and prompts that allow you to choose between, say, helping a young noble clean up after a party or letting them join your group. The way you resolve these mini-adventures has an impact on the game. For example, if you take the “noble” option the encounter might be more difficult, but the people of the countryside will rally around you. The beta contained more jokes than the final product, which mostly confines them to these interactions with the common folk. They work pretty well as a break from the kill stuff/take loot cycle. Too many jokes would be tiresome, but SK hits a good balance here.

As you gain power you will come to the attention of the Sorcerer King. Either the Doom Track will fill up or your “threat level” will get high enough that he will take action. This action takes the form of sending out armies of monsters to destroy your stuff. This is a problem that can range from annoying to devastating, but eventually it will become clear – the King's reign of terror must end. You can either build a tower to wrest all the magic to yourself, or build a killer stack to confront the King himself, but the world is only big enough for one of you. 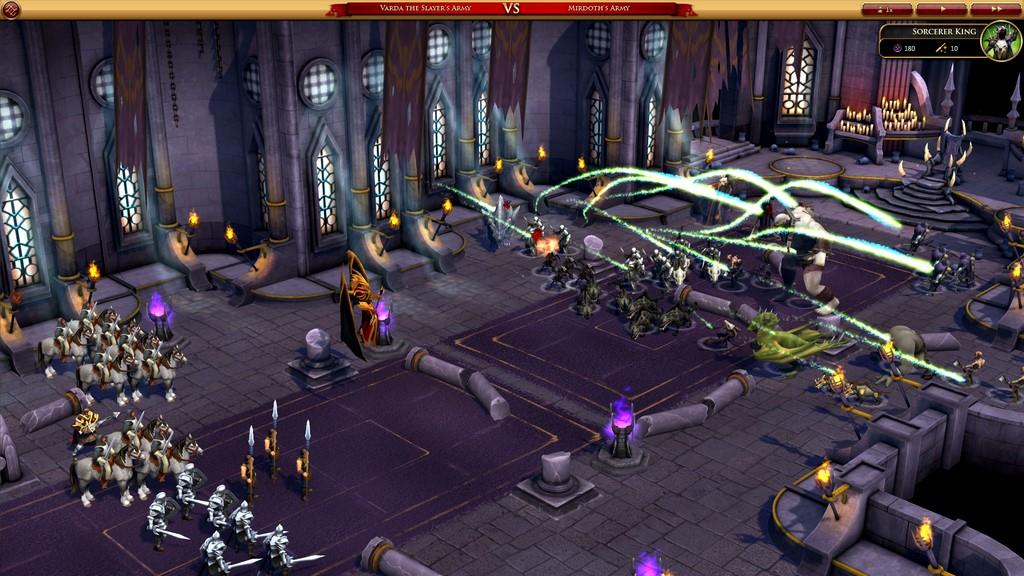 The challenge is that you never have enough time/manpower/stuff to really get powerful. This is a game in which the goal is to be just strong enough, to use everything you have in just the right way, so that when you get that one shot at taking down the Big Bad you can. Don't you just love it when a plan comes together? The asymmetric quality of the game (the King as Big Bad, the player as scrappy underdog) provides an interesting quality to things as time goes by – you are not attempting to overwhelm your peers, but rushing to beat the clock. It gives a much more story-like feel to the whole thing. The closest equivalent that comes to mind is “Sid Meier's Colonization”, with Britain as the King and the player as the colonists.

The tools you have are pretty standard. You can start as any of several different classes of sovereign, (warlord, wizard, priest, etc.) or customize your own. The map consists of square tiles that (sometimes) provide resources. Your city grows by accumulating food, and each level allows you to work another tile and build better buildings. Every army needs a hero and moves around on the strategic map. Combat occurs on one of several tactical maps. Winning combat provides experience so that troops can level up, increasing their hit points and offensive accuracy (and, for heroes, allowing access to new powers).

There is a magic system with a variety of spells. Spells are researched by accumulating mana, which is gained by capturing Shards, a map feature. You want to capture Shards while the King wants to destroy them, so there is conflict over these from the beginning. The spells themselves are of the standard offensive, defensive, and strategic varieties, and work well within the game. 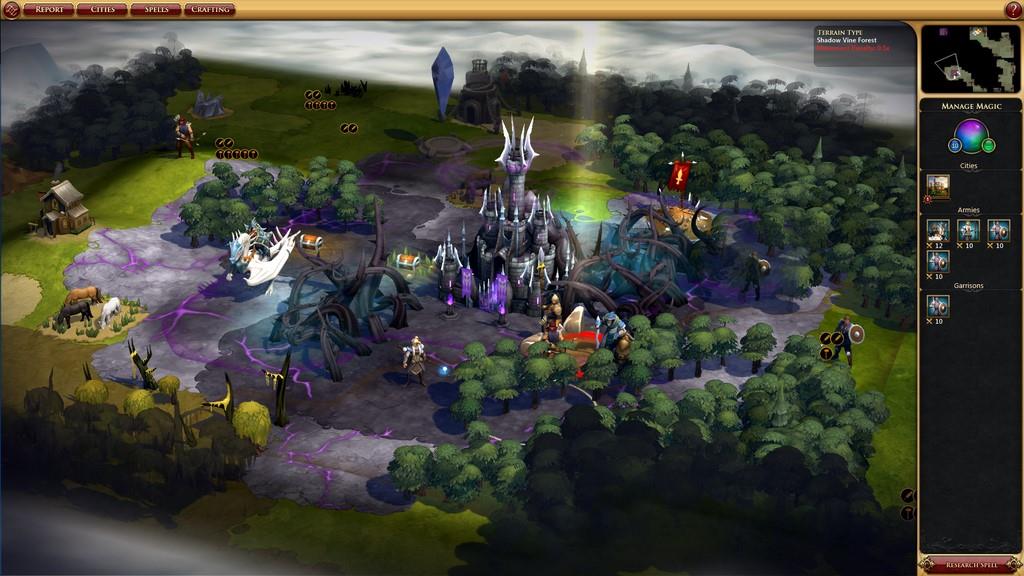 The look of the game is less grim than a lot of fantasy-based worlds (I'm looking at you, “Endless Legend”). There are a lot of bright colors and clean lines for the good guys while the bad guys get dark colors and grays. The magical effects are clear and informative without overwhelming the rest of the action. Do not let the relative friendliness of the game's look fool you – this is a serious TBS with good depth. It is both fun to play and challenging. Newcomers to the genre will find the learning curve enjoyable while they are drawn into the story. Veterans will find the tried and true elements working together like a well-oiled machine with an asymmetric twist.
SK is open to criticism in the area of originality. The underlying mythos, the various races, the game mechanics, the magic system – these are all very standard post-Tolkien stuff. It fits within the “Fallen Enchantress” universe but is more interested in exploring gameplay ideas than world-building.

The only real flaw worth mentioning in the game itself is that it is not quite done. Bugs remain – I had problems with treasure repeatedly spawning in the same place turn after turn, requiring a dedicated unit to run around. There are also some balance problems – the midgame, in particular, can drag between the terror of the start and the suspense of the end. These are all fixable with time, and easy to overlook given just how fun the game is.

Tried and true mechanics combine with flexible customization and an interesting asymmetric challenge to create a fun, challenging game. Worth playing for both newcomers and fantasy TBS veterans alike. A dash of humor and sense of progress make the time fly by.