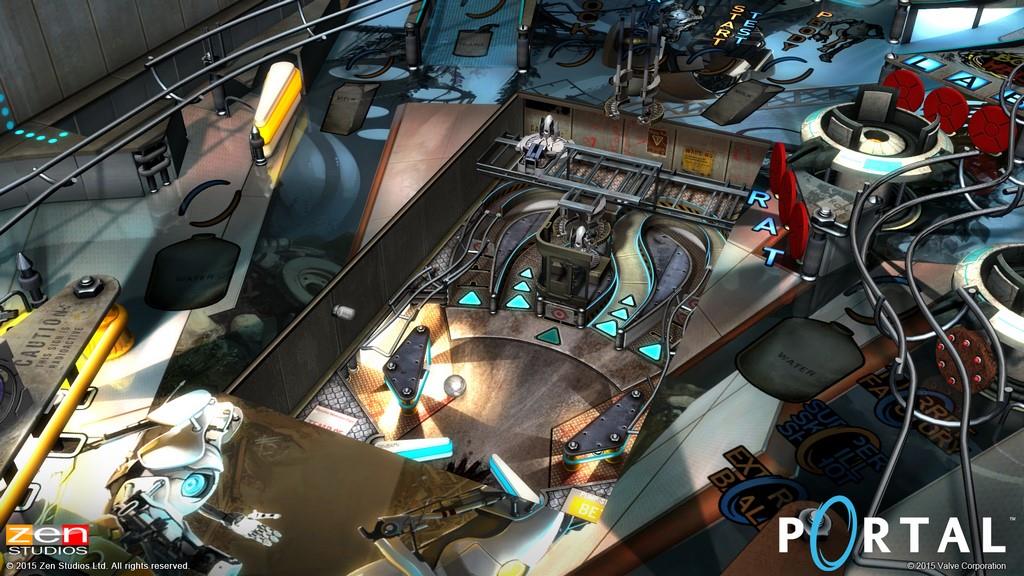 From the moment that the first teaser image appeared announcing Valve and Zen Studios’ were working together, I knew that Portal Pinball would be the first creation to result from their partnership. It just made perfect sense; there just wasn’t another Valve property that made as much sense as Portal in terms of themed-pinball tables. The gameplay possibilities of such a table were simply mind-blowing. The table is here and it ian absolute blast to play. However, the final result isn’t exactly the Portal experience that many had hoped for. Instead, the result shows that Zen knows how to craft an excellent pinball table experience on just about any subject that is as fun for new players as old pros.

On the visual surface, Portal Pinball is filled to the brim with fan service for those who love Valve’s puzzle-based FPS franchise. The table is laid out with decor that is similar to the testing facilities that are housed in the games, with high tech chambers that show sign of previous struggles and hints that you are there for more than just a “test”. All of your favorite characters are included too, to make things feel right at home.

ATLAS and P-Body join in the fray to launch the multiball sessions. Glados and Wheatley’s constant commentary will guide your plays, giving you both words of encouragement (Wheatley) and “loving criticism” (Glados, of course). Everyone’s favorite test subject, Chell, is here too and will make her way around the screen, physically attempting the challenges that your pinball is mimicking during the course of your game. You will also get glimpses of different turrets and your best friend, the companion cube at times as well.

Unfortunately, the Portal I.P.’s usage in this table is primarily from a cosmetic standpoint. You do get a glimpse of the actual, portal-technology in the form of a lone portal that appears near the top of the field that sends your ball, instantly, to a chute on the left side. Unfortunately, aside from that singular portal and the appearance of the characters and background, there isn’t much else brought in from Valve’s franchise.

Rather than feeling like a Portal-based pinball experience, which most fans were hoping for, it comes across as more of a pinball-themed tribute to the Portal games. The focus is more on the pinball aspect than the Portal one, which is a lost opportunity in my humble opinion. If it weren’t for Zen’s ability to craft fantastic pinball tables at even the most basic of levels, it would almost seem like the partnership between these two developers had gone to waste. 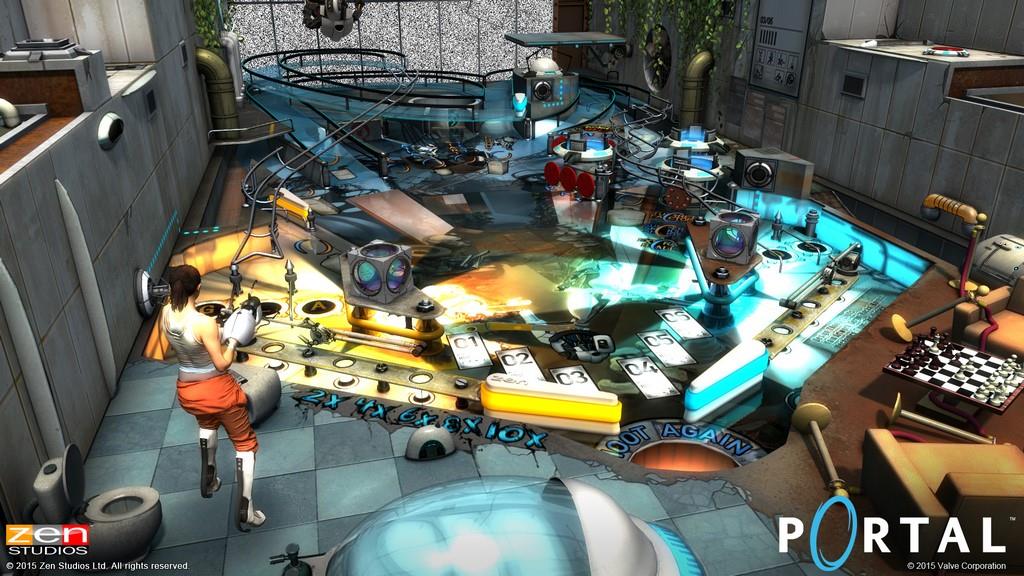 Thankfully, though, Zen’s craftsmanship makes the Portal table a ton of fun. They certainly know what makes a fun table and a lot of this all stems from it having solid pinball roots. The ramps are laid out impeccably, providing a good variety of easy to hit paths and a couple that will challenge even the most seasoned of players. Players really have to work on their timing and aiming skills in order to hit the more difficult ramps with any sort of consistency. This is almost a necessity if you plan on tackling the different missions that the table will throw at you.

Most of the challenges have you attempting to target specific ramps, which becomes a lot more challenging than it sounds. Two of the missions, the Ratman’s Den and Turret Training, will shift things off to secondary playing fields, something that Zen has done a lot with their creations. They are all relatively easy to get the gist of, except for maybe the Ratman’s Den. This one includes an unusual change in the table’s physics, which can really throw you off of your game. The general feel of the ball changes almost completely; they will suddenly have a ridiculous amount of “heft” to them in this area, completely changing their speed and the way that they fly off of the flippers. It really feels out of place compared to the rest of the table and is rather jarring the first time that you experience the new “feel” of the game. If you can manage to tackle all of the missions though, you do get to face off against Glados in a battle similar to that of the original games, which brings the experience to a nice conclusion on the Portal side of the equation.

All in all, this is another great table. The issues that exist with it are purely those of missed opportunities. Being a video pinball table, Zen had the opportunity to bend the rules of physics a bit, which that haven’t been too afraid to do in the past. Instead of taking that route though, and fully embracing the world of Portal, they played it safe and simply added a Portal-based visual theme to a well-designed table. It’s a really (REALLY) good table, but it could have been just as effective without using the Valve license.

Portal Pinball is definitely an excellent addition to the Zen Pinball 2 lineup, but that is based purely on its solid pinball mechanics and roots. The Portal aspect comes across as nothing more than cosmetic, which seems like a lost opportunity.