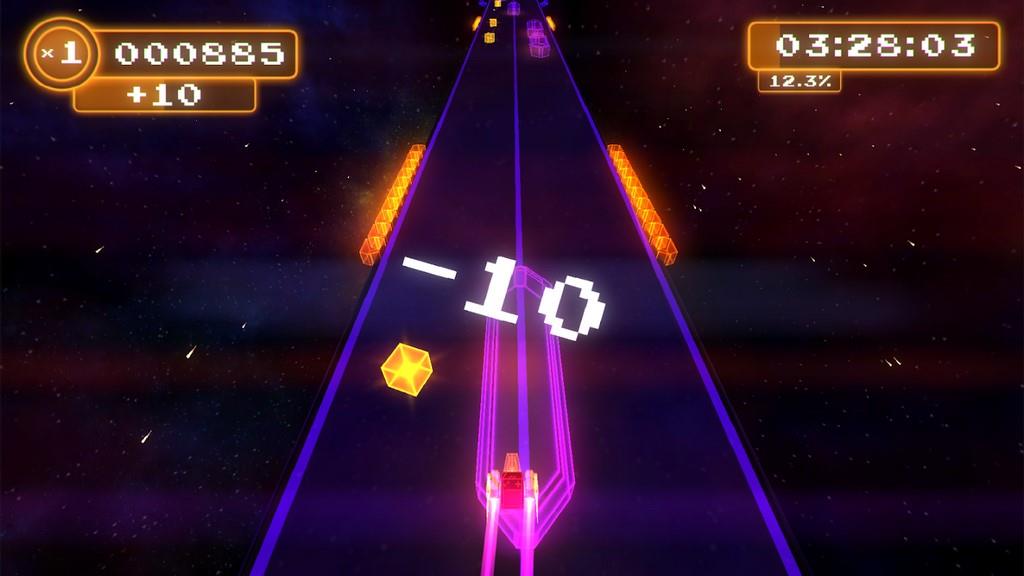 You can't always trust the first few minutes of a game. I've played enough slow burns to know that some of my favorite experiences take a few hours to get going.  This was not the case with Spectra. From the moment I pressed start, I knew exactly what I was getting myself into. And two hours later, my suspicions were confirmed. When it comes to this game, what you see is definitely what you get.

Playing like a mix between Audiosurf and F-Zero, Spectra is a disappointingly shallow racing game that sees players zipping through ten stages of procedurally-generated obstacles. The goal in each level is to pick up as many floating cubes as possible before either time runs out or the tiny craft falls off the narrow path. Pick up enough cubes and you'll earn three stars and unlock the next stage.

There are ten levels in all; each assembled using a different audio track. These stages whip around in wild directions and even split off into different paths. Occasionally you'll run into a speed pad that will shoot the player forward and add a much-needed multiplier for a short amount of time. But don't hit any of the obstacles scattered around the course or you'll lose the combo.

If all this sounds simple, it's because it is. There isn't much to do besides dodge neon barriers and pick up floating cubes. There's no jump button or special items to collect, it's just you swerving around a narrow track for three minutes. The only advanced maneuver worth mentioning sees players purposely steering off the course, allowing them to weave around poorly placed objects. But don't stay off the course for too long or the little craft will fall into space.

Beyond simply being shallow, Spectra is also surprisingly short. There are only ten stages, each of which are barely four minutes long. That's not to say you'll cross the finish line every single time, but it won't take long to see all of the content. It doesn't help that every level looks identical. You'll see the same color scheme, outer space backdrop and neon barriers in every stage.

It's disappointing that Gateway Interactive wasn't able to do more with this theme. The game never adds new obstacles or mechanics to keep the ten stages fresh. Not even the optional Hardcore mode bothers to innovate on the idea. Worse yet, the game doesn't allow players to import their own songs. You're stuck playing through the same ten tunes countless times, all in hopes of earning high scores and impressing your friends. 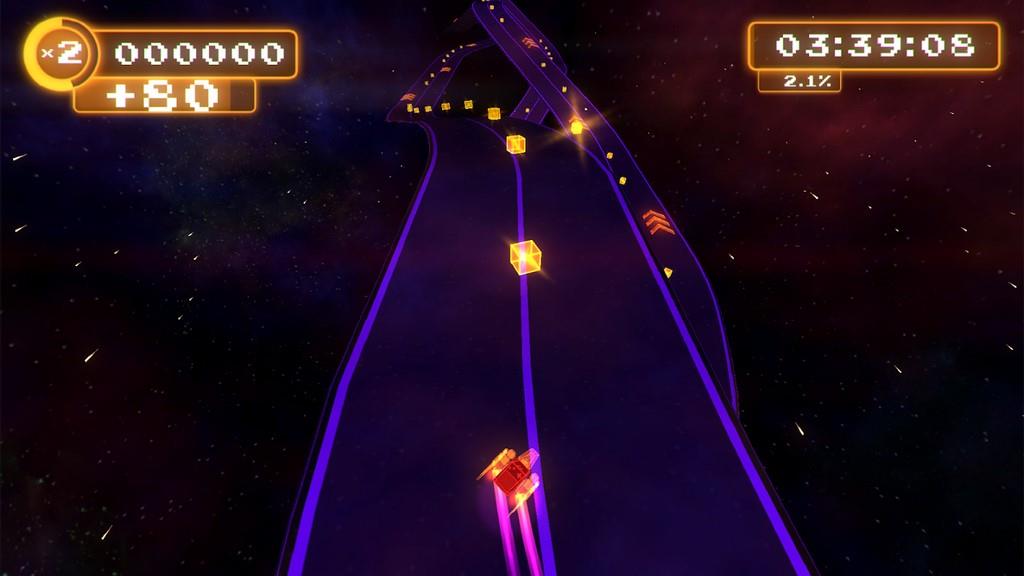 To the game's credit, I enjoyed the music that came with this package. The tracks all merge retro chiptunes sounds with high-energy electronica. The music is by far the best part of Spectra, but it's not a good enough reason to buy this curious release.

With only a few levels to beat and no way to import your own music, Spectra is the kind of game you'll quickly forget. The experience is not only disappointingly shallow, but it's needlessly repetitive. Every level looks exactly the same and the whole thing can be wrapped up in an hour or two. The retro aesthetic and great music simply isn't enough to recommend Spectra.

Even with good looking graphics and catchy retro-inspired tunes, Spectra is disappointingly shallow. There are only ten stages to contend with, each looking exactly like the last. Worse yet, the simplistic gameplay and overused obstacles make this indie outing feel repetitive. And with no way to import your own songs or create custom levels, Spectra is a game destined to be quickly forgotten.