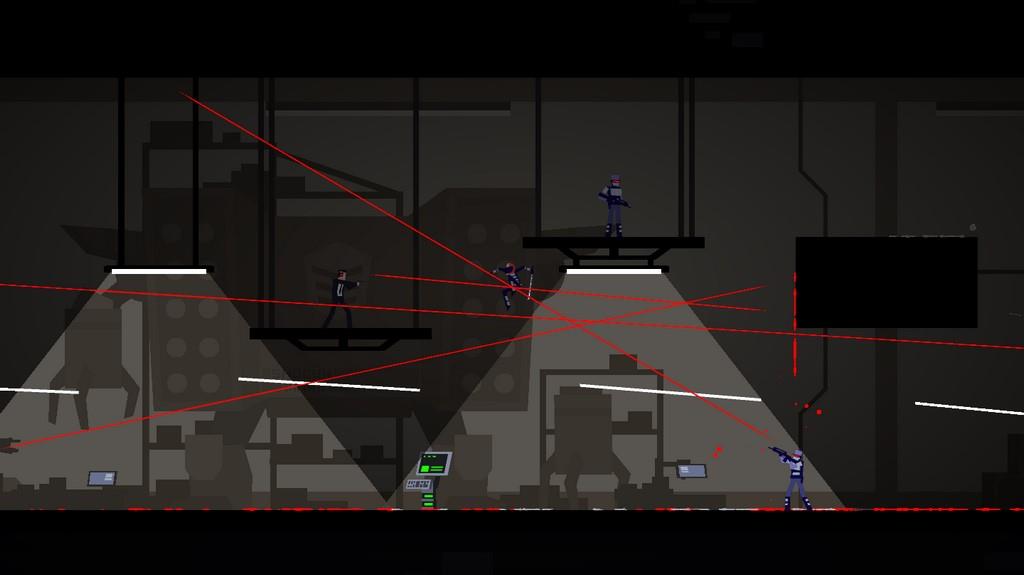 I'm not sure that I even knew what a turn-based action platformer was before I started playing Devolver Digital's Ronin. But I'm glad I found out. First—let's get this out of the way—yes, Ronin's visual style is a blatant rip off of Gunpoint. Even some gameplay was lifted, specifically the jump mechanic, and Ronin's creator, Tomasz Wacławek, admits as much. And what does Gunpoint's creator, Tom Francis, think about that? He thinks it's really cool." And for good reason, because as Francis says in that blog post, the mechanics were "there for the taking," and he "wanted more games to be that way." Though he was also playing a much earlier version and hoping Ronin wouldn't steal the artwork or music. Yeah, about that...

Even if the visual style evolved into something a little too close for Francis's comfort, the end result is a distinctly different game. Gunpoint was about rewiring buildings to puzzle your way through levels. Ronin uses the acrobatics of our protagonist ninja to traverse those buildings with relative ease. It's as if the Bride from Kill Bill invaded the world of Pulp Fiction. Visual similarities and some shared mechanics, but different outcomes. The real puzzle in Ronin isn't in moving through the world, but in overcoming your enemies. You can freely wall climb, traverse ceilings, and smash through windows, swinging from one obstacle to the next while avoiding the spotlight until you inevitably find yourself faced with a room full of baddies standing between you and that next goal. It's when the action starts that the puzzle actually begins.

Ronin is not a stealth game, it's a ninja game. Stealth is utilized to good effect to position yourself for the first blow, but once it's struck it becomes that turn-based platformer. When spotted, the game pauses, enemies take aim with the start of each turn and fire at its conclusion. The strategy is in maneuvering your ninja out of the line of fire and positioning yourself to strike back before the next round is fired at your new location. You often have to think multiple moves ahead because one hit will kill you and most of your openings to strike an enemy are at the end of another's sights. Take the strike and take a bullet as well. Sorry, try again. 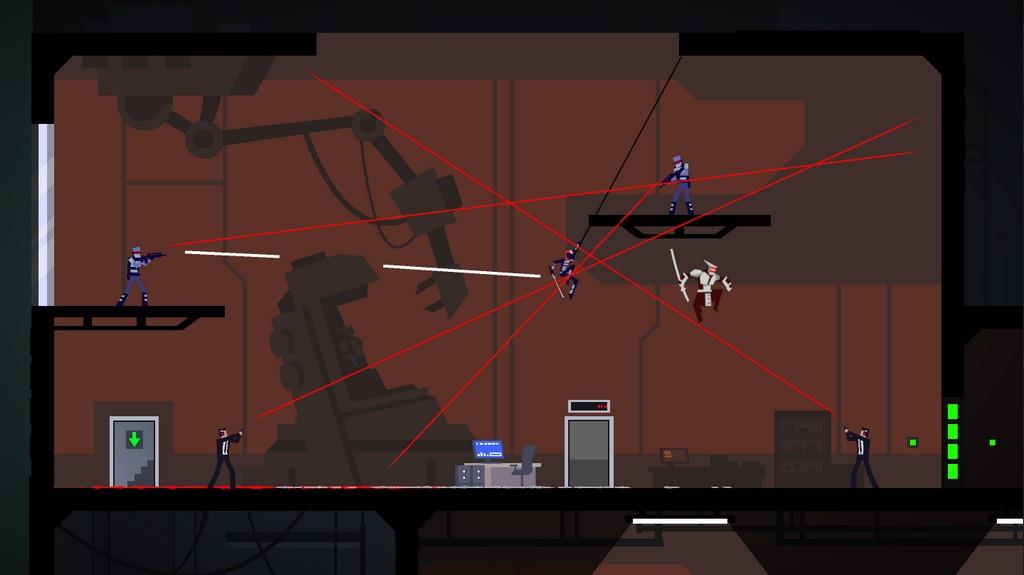 There is enough strategy in each encounter to keep the game entertaining. There are a few types of enemies: Secret service-type guards who fire a single shot, machine gunners who's salvos will spray through a turn (making a path past their sights unpassable), and samurai who can jump across the map and slice down any ninja in their way. What really makes the game though, is that each encounter is unique. There are a few particularly troublesome areas to clear that will require trial and error and repeated attempts. Thankfully the save points are generous enough not to make the lead up to these rooms an undue burden; but each time one is tackled, the encounter will play out slightly different. There isn't any pattern memorization or prescripted formula to defeat the levels. That's the best thing, because predictable enemy patterns are the cheapest form of level design. You also have an arsenal of power ups that unlock using skill points as you progress. Using these wisely are essential for the tougher rooms and add another layer to the strategy. There is little by way of a tutorial, but the U.I. is exceedingly easy to grapple with. Each action in a battle is mapped to a specific button (highlighted onscreen to perform that action), and the jump arc pretty clearly shows the direction of your next move.

The end result is that combat is carefully orchestrated, it takes come cleverness to best, and is rewarding when you do so. It's a puzzle to solve that plays differently every time you attempt it. And, at least to me, that's how a ninja game should be. Ninja'ing isn't about quick twitch buttonmashing. It's cold and calculated stealth leading to clearing a room by cutting down each foe one by one with a single strike of your katana. While the encounters themselves play out with enough variety, the overall length of the game is a little light. There are five bosses to take down, each with three levels to traverse before the showdown. The 15 levels go by quick, but there is a new game plus which really ramps up the difficulty. You take your power ups with you, though, and by that time you feel powerful enough to take on the world. 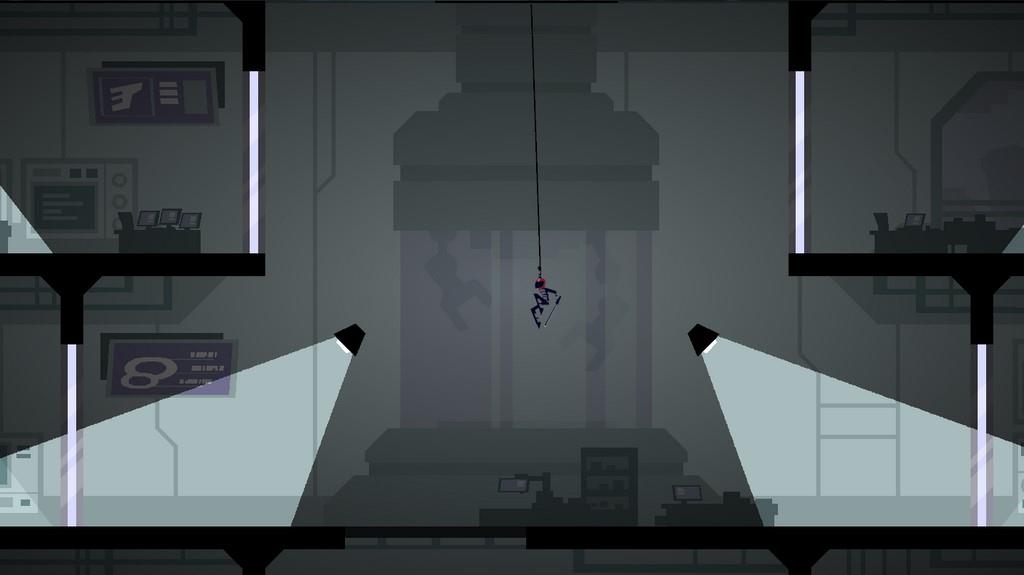 There is also a plot, I guess, but it's an afterthought. In a way, the lack of plot actually made the game better. The plot is conveyed by text overlaying the loading screen, which is an old black-and-white photo showing your targets grouped together in happier times, long ago. There are more than the five in the photo, and it actually wasn't until researching for this write up I even realized that your character is the little girl in the picture. The plot is just so light. But by that token, it doesn't get in the way. The why of it all is secondary. The game clearly defines your mission as one of revenge, setting the rules of engagement to reinforce that pathos. They will know you by the trail of your dead, and bonus points are awarded in each level for killing every enemy, with another for not killing any civilians. What the game misses in crafting a narrative, it more than makes up for in nurturing an emotion. You clearly feel like you are a ninja and that revenge is what's on the menu, even if you've no idea how you got to the table. And it doesn't matter, because as you peel off on your motorbike through the driving rain to your next target—with nothing but dead bodies and blood splatters left in your wake—you understand that emotion, even if your character is a bit of a stranger.

At the end of the day, the Gunpoint visual style is worth emulating. It's simple but it really gives a 2D platformer a bit of retro cool that's easy on the eyes while delivering the goods. The music is also excellent, especially when you jump in an elevator. The gameplay is fun and flows through the levels until the combat starts. There is just enough of a puzzle element there against unpredictable encounters, even when repeated, to be very rewarding. And the final level is fantastic. It brings a beautiful twist on a death mechanic that I don't even want to spoil, but really feels like you've been thrust into the final battle against all odds, like in a feature film— if feature films were shot in 2D.

Ronin is fun to play and its strengths more than overcome its weaknesses. It lacks much by way of plot but sets a mood that creates the atmosphere it needs. It offers enough strategy and variety in its combat to overcome a somewhat short length, and invites players to playthrough again with its unscripted encounters. It has a fantastic little twist to the gameplay mechanic at the end that leads to a satisfying payoff in the final battle.