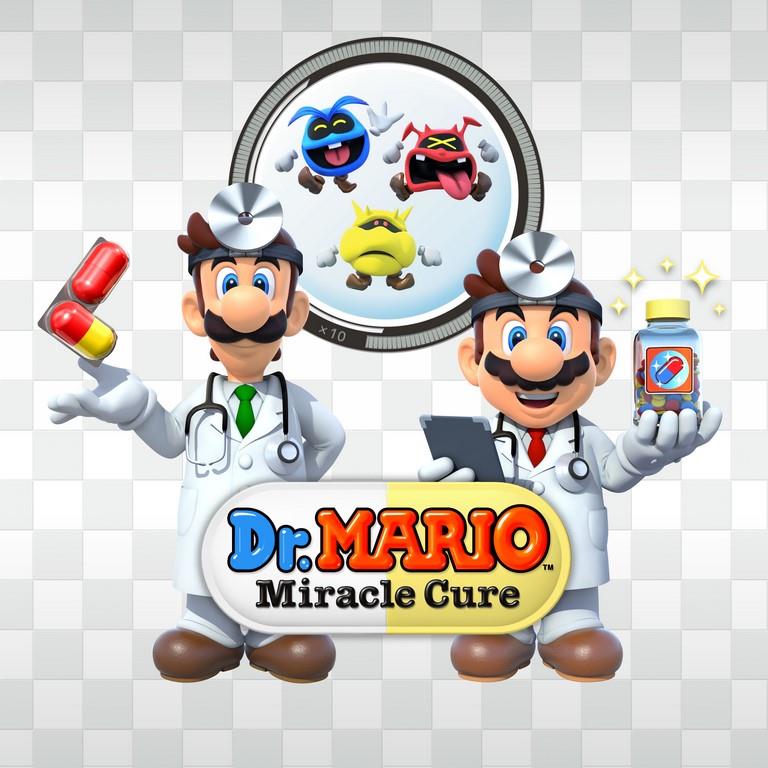 I seem to be on a bit of a puzzle game kick as of late, but I’m not complaining as I get to review the latest entry for my favorite puzzle game, Dr. Mario.  Dr. Mario hasn’t seen a lot of entries over the years, but then again how can you improve a concept that involves dropping colored pills onto viruses to clear them out?  Well, Nintendo may have answered that question with Dr. Mario: Miracle Cure, so let’s take a look to see what this Miracle Cure is all about.

If you’ve never played a Dr. Mario game before, the premise is rather simple.  You have to drop colored pills onto their respective colored viruses and lining up at least four of the same color in a row will wipe them out.  As far as puzzle games go it’s rather simplistic and there haven’t been too many additions over the years.  The Super NES saw “Tetris & Dr. Mario” that somewhat combined both classic puzzle games into one cartridge, Dr. Mario 64 introduced four-player multiplayer (though on smaller TVs it could really hurt your eyes since everything is smaller to fit it on the screen), and we recently had Dr. Luigi on the Wii U that introduced the concept of L-shaped capsules which were basically two capsules combined together in an L shape. 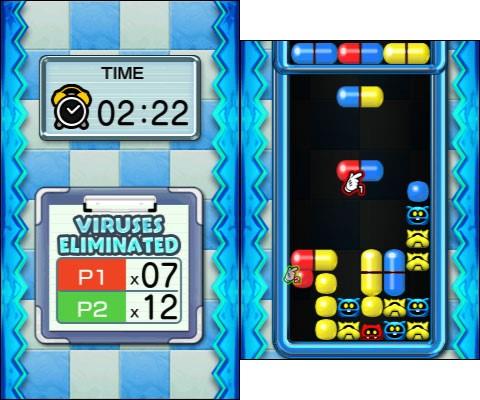 Dr. Mario: Miracle Cure introduces…well, miracles cures which are bonus items that appear during gameplay.  As the game progresses, a meter on the right side will begin to fill up slowly but will fill up faster with each line of four capsules and/or viruses you eliminate.  When it reaches the top the miracle cure shown will drop into the bottle.  These range from arrows that will eliminate anything in line with the arrows, to bombs that blow up everything in a certain radius, to even capsule and virus busters that eliminate all viruses or capsules of the corresponding color.  Now I know what a few of you might be thinking.  “Doesn’t that just dumb down the game and make it easier?”  Well if you’re someone who’s put in a lot of time with Dr. Mario, it does.  However, using the miracle cures are completely optional…sort of.

There are multiple game modes to play and this is where the option of using the miracle cures comes in.  Your two main single-player options are Miracle Cure Laboratory and Custom Clinic.  The Miracle Cure Laboratory is basically a bunch of challenges designed to get you used to the game itself as well as introduce the Miracle Cures, then begin pitting you one on one against the CPU in Dr. Mario and Dr. Luigi.  The Custom Clinic is the bulk of the Dr. Mario experience where you can choose to play Dr. Mario, Dr. Luigi, or Virus Buster either alone or against the CPU.  While I already mentioned the difference between the two brothers, Virus Buster is a unique take on Dr. Mario where you turn the 3DS sideways and use the stylus to move and rotate the capsules as they fall.  It sounds easy but after a while you’ll have to manage multiple capsules and segments at once as they begin to cluster the screen. 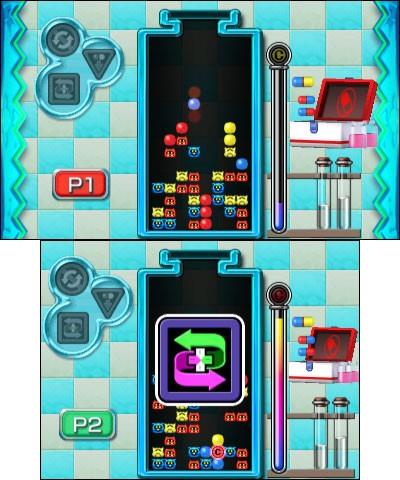 As for Dr. Mario and Dr. Luigi, both games let you play with or without Miracle Cures and all three modes allow you to play alone or against the CPU.  If you leave Miracle Cures off it’s just your basic Dr. Mario/Luigi/Virus Buster.  However, when playing by yourself with the Miracle Cures, the game turns into Endless Mode where there are no stages and new viruses appear every so often and push everything in the bottle up one to three lines.  The game ends when either you overflow the bottle yourself or if the game tries to push up something that would go outside the bottle.  If you happen to clear all of the viruses in the bottle, the game is generous enough to give you five new lines of viruses to eliminate.  It’s also worth noting that the capsule speed, which typically increase every ten capsules you drop, seems to reset after a while.

The game also has an online mode where you can play in ranked matches of Dr. Mario or Dr. Luigi, with or without Miracle Cures (if you play with, it’s still standard Dr. Mario multiplayer rules, not Endless), and either local or online.  When playing two players with Miracles Cures turned on (either by yourself or against the CPU) there are three other “cures” you can end up getting that can temporarily reverse your opponent’s horizontal movement, speed up their drop rate, or not allow them to rotate capsules.  Each effect lasts around ten seconds or so and is a nice touch, but…well, I’ll get into my thoughts on that in a moment.  It’s also worth noting that not many people seem to be playing this one online as several times I waited a couple of minutes for a match and never got one, though I was able to get a few matches in against some random Japanese players who all kicked my butt. 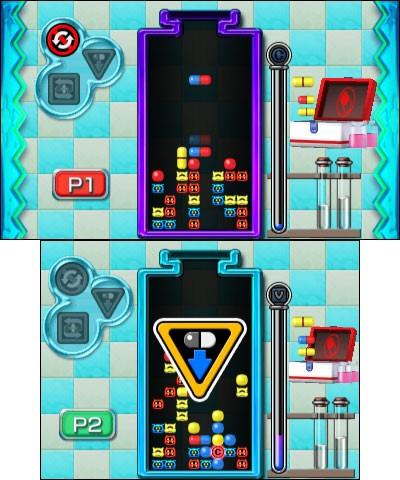 So where does all of this leave me with Dr. Mario: Miracle Cure?  As a gamer I don’t have many issues.  It’s Dr. Mario on the 3DS with a new feature and online play (a first for the handheld games), but there is a nitpick here and there.  On a cosmetic note I realized that you can’t select your background music; it’s randomized between stages.  This disappointed me quite a bit as while I like both the classic Fever and Chill themes, I’ve always preferred playing to the Chill theme as it just sounds more serious and I seem to do better while listening to it.  Another issue is that unlike previous Dr. Mario games where you go for an overall high score, Miracle Cure keeps high scores per stage, not overall.  This was highly disappointing as I like to go for an overall high score, but unless you manually keep track of it on paper or something, all the game keeps track of is your best score for each stage (this goes for all three modes without Miracle Cures turned on, though Endless games with Miracle Cures will keep track of your best score and number of viruses eliminated).

Beyond that, there’s not much to say.  While it’s great to have Dr. Mario on the 3DS and it looks and feels great, there’s just a couple of things I wish were done differently that was taken out of this version.  If you don’t mind not choosing your own music or even going for a high score (which is kind of the point of puzzle games), Dr. Mario: Miracle Cure is a pretty good addition to the series.  Heck, as a huge fan of the series I’m still glad I got to play this one and still will now and then, but without being able to keep track of an overall high score there might not be as much replay value as the previous games aside from the Miracle Cures themselves, which are a nice change of pace from the status quo for the series.  Overall if you’re a fan of Dr. Mario you’ll likely want to pick this one up.  Some people might find the nine dollar price tag a tad overpriced for a Dr. Mario game with few improvements and a couple of setbacks, but for a solid Dr. Mario experience I feel it’s worth it.

Dr. Mario: Miracle Cure doesn’t offer too many improvements outside of the Miracle Cures and graphical updates, but that’s kind of expected with certain puzzle games.  The game still provides a solid Dr. Mario experience with the Dr. Luigi and Virus Buster game modes thrown in and the addition of the Miracle Cures shakes things up a bit, both online and off, but the lack of an overall high score for your game session seems like a step backwards for a standard puzzle game.  While not perfect, if you’re looking for some Dr. Mario on the go, Miracle Cure is still worth a shot.