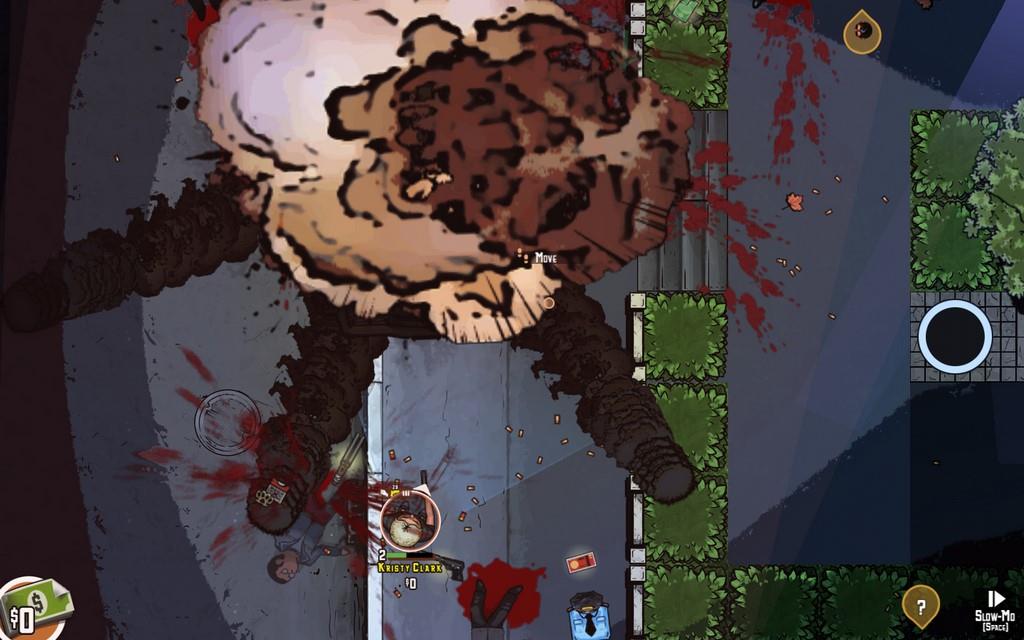 I think the first thing that comes to mind when you start up with Shark Punch's The Materplan is that it looks a bit like Hotline Miami. But other than the crime based plots, top down view, and settings in bygone decades, there is little similarity between them. Hotline was a frantic, 80s inspired drug fueled run and gun twin stick rampage. The Masterplan takes its cues from the Nixon era 70's puts a little more cartoon in the graphics, tones down the ultra-violence, and sets it all to an incredible 70's musical score for a methodical point and click heist adventure. There are three main story braces of various heists leading up to the ultimate prize, an assault on Fort Knox. The masterplan requires you to navigate your environment slowly use it to your advantage. While there is some leeway in each heist to vary between the sneaky approach to pulling out your pistol to overcome a certain specific point along the route, you don't really have the option to blast your way through any of the levels. Guns are expensive and ammo is in short supply. Guns are best used to stick up the other characters, civilians and guards alike, and get them to either do your bidding while the end of the barrel is still trained on them or have them just stand idle as a partner pummels them unconscious. The Masterplan is not the kind of game where they will know you by the trail of your dead. And while dead men tell no tales, gunshots alert the neighborhood, and unconscious victims do wake up and along with those alerted guards run to the nearest phone to call the police. When the cops arrive your mission is often better just restarted. Even when the game does put a shootout on the menu, like when the fuzz shows up, the control scheme really stands in the way of success.

There is no controller support but there is a pretty easy point and click interface with just the mouse. Scroll to zoom in/out, left click to select a character, click and drag to select multiple, then right click to move or target, etc. It simple but can be time consuming as each action for each character can then take multiple inputs to accomplish. Turn a corner and run into an enemy - click once to select the character, a second time to bring up his inventory wheel, another to select his weapon. By now that cop already had put three bullets in you and you still haven't trained your sights to actually begin returning fire haven't even drawn your gun for anyone else in your party, and the stakes are as high as they could be as losing a character is permanent. Leave a man behind and they won't be respawned in your criminal lair when you return between heists. Things can happen quickly in this game, but I never felt equipped to respond to them in kind. Better then to follow the plan, take it slow, avoid contact, take the long way around, disarm the cameras and pick off isolated enemies one at time, and do it quietly.

But even by that strategy there were way too many missteps and mistakes forcing another retry from the start of the heist. And that's only after you've actually figured out the plan of attack to begin with. My major qualm with The Masterplan is right there in the title. This isn't a strategy game, there is no plan before you jump into a mission. You don't have the intel to even form one. This game isn't the Masterplan, it's really the Pattern Memorization. You memorize the guards patters for each level and adjust your strategy accordingly. You have to plod through the heists without any knowledge of whats around the next corner until you actually peek. You don't know where that key to the backroom might be might be until you beat down the right guard and see it drop from his pocket. The plan only develops as you replay the same level with the same set up and the same patterns by trial and error over and again.

One mistep, even through no fault of your own, and you're often best off restarting the heist - and there are lots of missteps. Maybe I'm just bad at the game, certainly those times (plural, ugh) I started shooting a box I had intended to just melee because i forgot I still had my pistol pulled, yeah those are on me.  But there were too many frustrating instances deep into long heist sequences when I'd click my bandits to head through a doorway they only recently just traversed but instead of retracing their steps they decided this time that box that ever so slightly obstructed their path had to be circumnavigated by taking the scenic route all the way down the long hall and past two security cams and a guard. If I could rename my characters I would call one Columbus and the other Magellan. And off they go as frantically I'm trying to click them back into formation behind cover but by the time they about face they're already spotted and the jig is up. I have a hard time coming down on myself when the path finding of the AI pulls a moron move and then the interface compounds the issue by not lending itself to quick correction. And coordinating a team through any sort of complex maneuver? Forget about it. Keep 'em together and move in tight pack. Jostling through the characters and their inventory and getting each to do your bidding on any kind of separation of task is time consuming, a bit of a chore, and when one gets spotted while you are fumbling around with another, here comes the mission restart again!

I don't want to come down too harshly on the game though, because it's really not that bad of a game overall. The idea behind it is very clever as are many of the gameplay mechanics, it's just the execution of those things that need some tightening up. But at times I did find it more frustrating than satisfying. I think the foundation is there for it to be so much more. The game is really a unique experience. I can't think of another game quite like it, certainly none in my games library. Tighter controls, a better tutorial and use of the keyboard to orchestrate movement, and most importantly some actual intel to make the missions less trial and error and more clever strategy could go a long way. The game is wrapped in a neat package. While I personally do not enjoy the top down view, the graphics are good, the soundtrack is fantastic, and there is excellent variety in the environments from heist to heist. The repetition comes from having to replay that heist over and again to beat it, but each new one offered something different. Honestly, I think this game should be ported to mobile devices. I think using a touch interface on a tablet would go a long way towards overcoming the control issues and by actually providing some more intel on the missions there could be a great mobile game here.

In the end, while the gameplay and repetition required can be frustrating, The Masterplan is very well put together from an aesthetic standpoint. It's a unique gaming experience at a price point that's low enough to forgive some of it's faults. I like the idea behind the game, I like the character interactions with stickups and traversing the world via various paths. I just don't like having no idea what's around the next corner until you actually peek, and if it's bad news it likely puts your game in a state where you're better off starting the mission all over again. The Masterplan is a good game held back by a necessity for trial and error. Give me the intel on who has the key, let me catch him on his break and leave him out cold in the bathroom stall, while I sneak in though the backdoor and use the security cams to my advantage to direct my partner past the patrolling guards. Now you've created a game deserving of the title The Masterplan. Instead I'm fumbling through the dark, my only illumination coming from past mistakes.