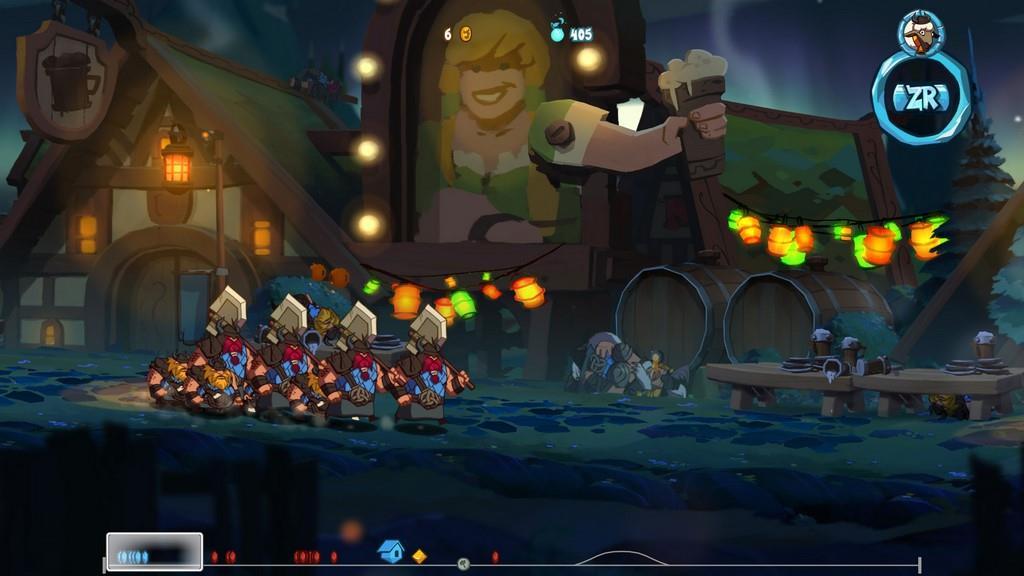 Written by Russell Archey on 6/18/2015 for WiiU
More On: Swords and Soldiers II

Real-Time Strategy games can come in various forms.  More often than not when you think of RTSs you might think of games like Starcraft or Command and Conquer where you have to mine for resources, spend those resources on minor troops, then after a while begin to upgrade your facilities to mine more resources and build more powerful troops before sending them out on a full-scale attack on your opponent.  Then you have games like Swords and Soldiers II which is a lot more simple RTS (and yes, I kind of classify this as an RTS), but is simple really better?  Let’s find out.

The story of Swords and Soldiers II is…kind of all over the place.  For instance, during the tutorial you play as a faction of demons in a cave trying to get a lamp.  Okay, fair enough.  So after this Persian faction steals the lamp and gets away we’re going to chase them down, right?  Nope!  We instead move onto a group of dwarves as they have their own dilemmas to deal with.  In fact, it won’t be for several stages down the line in which we hear about the lamp again.  Now granted this doesn’t make this a bad game, and I tend to be more critical of the gameplay over the narrative and story, but by the time I heard about the lamp again I had almost forgotten it existed to begin with.

The gameplay itself is pretty simple to learn but can take a while to fully master.  Swords and Soldiers II opts for a left-to-right side-scrolling style of gameplay where your units will move automatically after purchasing them.  That reduces a bit of the strategizing from typical RTS games, but there’s still quite a bit to micromanage, such as varying movement speeds on units to purchasing upgrades to deciding when and what to purchase.  Should you send out smaller units to rush in and get some quick damage in, or do you opt for slower but more powerful units to deal more damage.  If you don’t manage things properly you can find your troops spread out pretty thin in various areas of the stage.  Each stage also has a couple of badges to earn for completing various bonus objectives with a total of 75 badges to collect.  This provides some replay value once you begin to get more accustomed to the game.

You can also purchase and build various towers to help you out, such as defense towers to fire upon enemies who come close or mana towers to recharge your mana at a faster rate (I’ll get into spells in a moment).  These towers though have a couple of caveats.  The first is rather obvious; enemies can attack the towers before they’re fully built meaning that if you’re not careful they can be taken down within seconds of when you start to build them.  You can also only build towers on specific spots of the field which kind of makes sense so you can’t just overflow the field with towers and basically overrun the opposition, but there aren’t many spots where you can build towers.  Then again they can also build towers and portals only on those spots so in a way that’s a good thing. 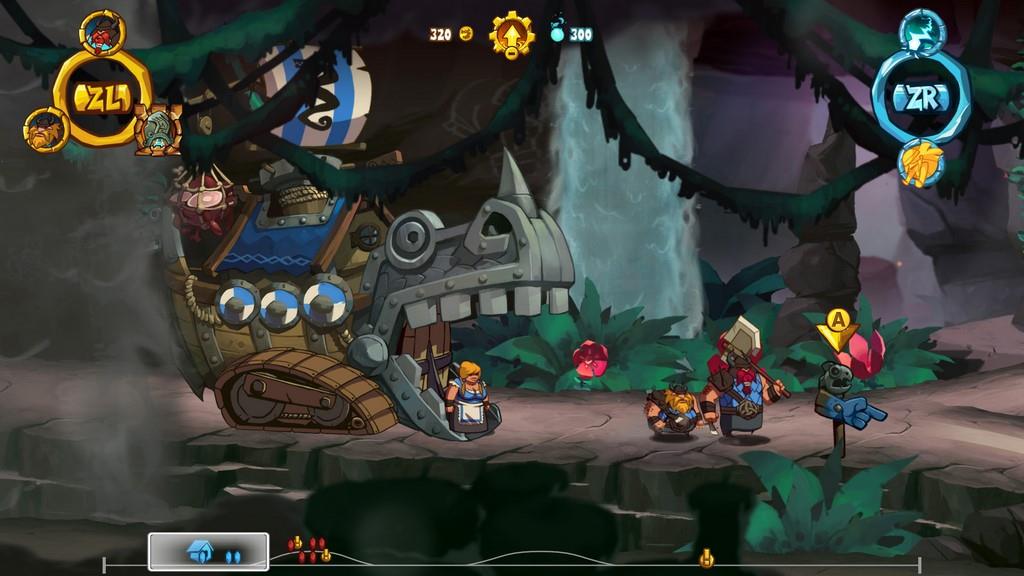 As for the spells, there are quite a few you can learn such as a thunder spell to deal significant damage to a single enemy to casting a full-on blizzard and stopping several enemies in their tracks for a few moments.  More powerful spells range from dropping meteors on your enemies provided you can aim it properly, to sending out a giant Viking that can punch enemies into the air and deal more damage the longer they’re in the air.  Of course these “spells” cost a lot more mana than spells like thunder or a healing spell so you have to use them sparingly.

While I made a small complaint about the story, I will gladly admit that I do enjoy the dialogue during the game, both before and after a stage.  Prior to the stage you get a bit of story exposition from a drunken Viking in a wheelchair (which that in and of itself is awesome) and during the game you’ll get some back and forth between you and the opposition.  Naturally if you’re playing the Vikings in a particular stage you might have one or two units a little tipsy in their dialogue which makes things all the more entertaining.  I’m kind of curious though as to why the pre-stage exposition is vocalized but the story elements during the stage is standard/generic gibberish accompanied by text boxes.  It’s not a major gripe, but something to point out. 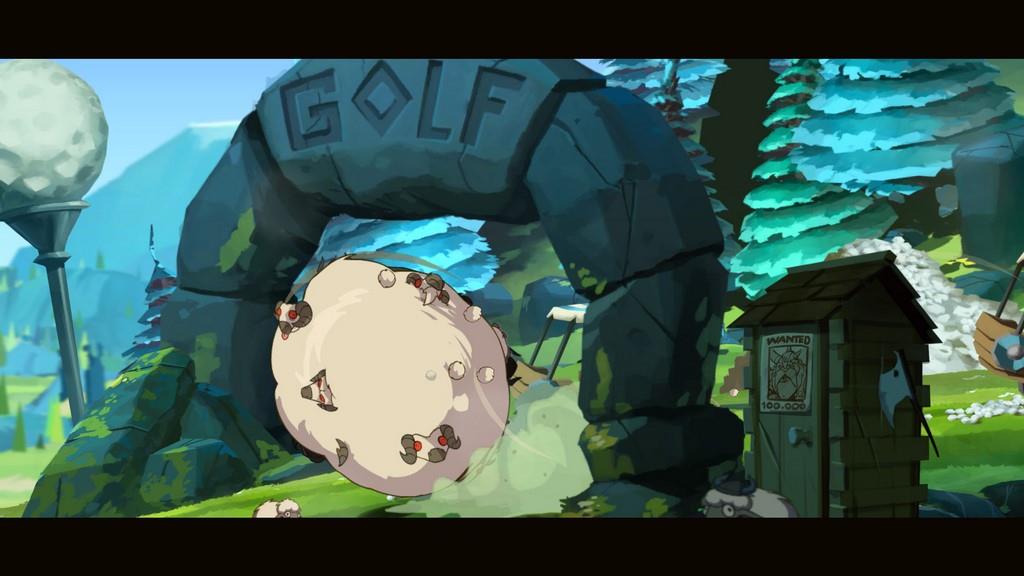 When it comes to the difficulty it doesn’t seem too bad if you’ve played RTSs in the past and know what you’re doing.  As someone who isn’t well versed in the genre I had a bit more difficulty in getting through some areas, but this I mostly blame on myself.  However, it did feel at times that no matter what I did with my units I kept having issues clearing some stages.  At first I would focus primarily on getting smaller units out to take out some enemies, then unlock some upgrades in my skill tree.  If that didn’t work I would upgrade first, then purchase units.  Again, for the most part I’m not blaming the game as much as my inexperience with RTS games.  RTS aficionados will likely be able to purchase units and upgrades more efficiently than I can.

However, if you are like me and are having issues you can always take on a scenario in Easy Mode.  This reduces the amount of money needed for purchases and reduces mana costs a bit to make things a bit more simple and it can make quite the difference.  In one stage for instance I had all sorts of issues making a dent in any sort of progress.  I tried it in Easy Mode and cleared the stage with minimal issues.  It still took a bit of time but the reduced mana costs helped as I could cast Thunder more often to eliminate more enemies in my path. 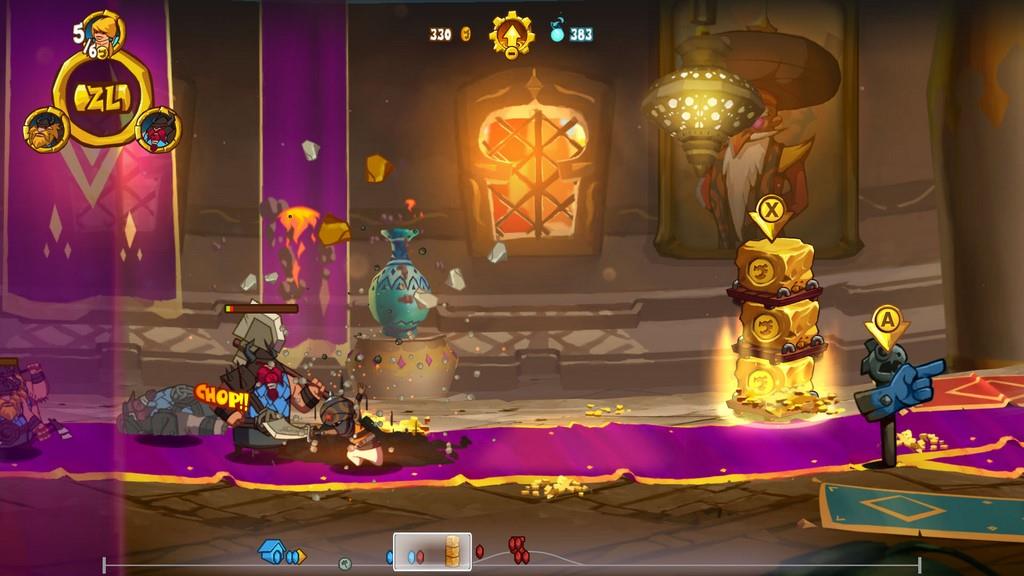 Outside of the single player campaign you can also take on a friend locally or set up a skirmish.  With the two-player mode there’s sadly no online option so you can only take on a friend who’s in the same room with you.  As for Skirmish it’s basically the same thing as the two-player option, just against the CPU.  While you choose which faction to play as (Vikings, Demons, or Persians) you can also change a few settings such as starting gold and mana and how much damage you put out so you can customize your game however you like.  This is a nice feature but it’s a little disappointing that you can’t go online with the game.

Overall, Swords and Soldiers II is an entertaining game.  The graphics are nicely done, the music’s good, and the dialogue and story elements provide some decent entertainment.  I mean, who doesn’t want to see two rival Vikings argue about a lamp while on a golf course?  (Yes, at least one stage takes place on a golf course.)   RTS fans that don’t take their gaming too seriously will likely want to check this one out while those not into the genre (or, like me, just aren’t that good a RTSs in general) should be able to check out Easy Mode if they’re finding things a little too tough.  While I have played better RTS games, it’s hard to say I’ve played any with a more entertaining premise and story.

Swords and Soldiers II is an entertaining RTS game that doesn’t take itself too seriously.  That being said hardcore RTS players might find this one a bit too “silly” for their tastes, though players new to RTS games might find it enjoyable, especially with the option to go through any stage on Easy Mode.  Either way, while not the best RTS game out there, it is an enjoyable one.