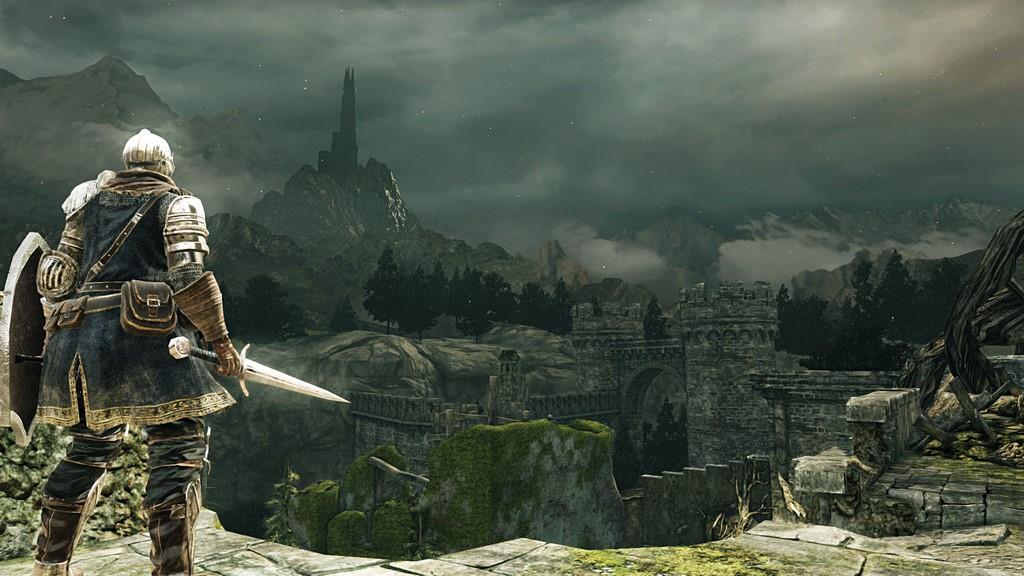 I don't think I'm being hyperbolic by calling the original Dark Souls a masterpiece. In an era when games have steadily become easier, the 2011 adventure bucked the trend by making everything as difficult as possible. Instead of lengthy cinemas full of melodramatic plot points, the game opted for obtuse level designs and a vague story you had to fill in. By ignoring every rule in the book, From Software was able to create an immersive quest that felt nothing like The Legend of Zelda or The Elder Scrolls.

Normally, this type of game would win over a few critics and develop a small cult following. But that's not what happened. Dark Souls ended up becoming a surprise hit, selling millions of units around the world. The success led to shameless imitators, a vaguely connected spin-off, and a proper sequel, released on the Xbox 360, PlayStation 3 and PC in 2014. Now comes Dark Souls II: Scholar of the First Sin for modern consoles, marking the first time the series has been remastered.

Although dark and grimy, the Dark Souls series has always been known for their lavish visuals and attention to detail. The game's beauty comes into focus on the PlayStation 4, where it runs at a consistent 60 frames-per-second at 1080p. You will be able to see every scratch and blemish in not only the standard game, but all three expansion packs -- Crown of the Ivory King, Crown of the Old Iron King and Crown of the Sunken King.

Had this simply been a better looking version of last year's critically acclaimed adventure game, I would have gushed about the visuals and recommended it to new players. But Scholar of the First Sin goes several steps further by making substantial changes to the quest. Returning players will quickly discover that the world of Dark Souls II has been tampered with and many of the enemies have been rearranged. These nasty bad guys have also had their artificial intelligence tweaked, making them deadlier (and more unpredictable) than ever before. 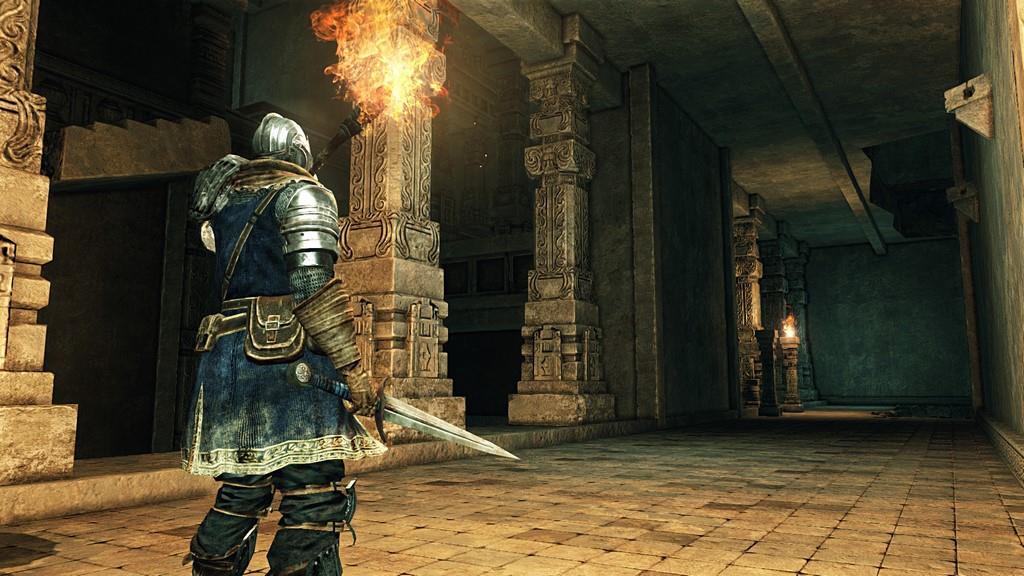 Much like the first game, Dark Souls II throws the player into the deep end and hopes for the best. There's very little set-up before our hero is asked to explore the world and defeat massive bosses. Cursed and beginning to lose grip of reality, you take control of either a male or female Undead human who is desperately seeking a cure. Our hero has traveled to Drangleic in hopes of reversing the curse before it's too late. This sends us on a punishingly difficult quest that is as satisfying as it is frustrating.

If you've played the original Dark Souls, then this game's difficulty won't come as much of a surprise. This is not the kind of action game where our hero can handily take down dozens of enemies without breaking a sweat. Scholar of the First Sin requires patience and practice. It's about learning each villain's tactics and waiting for just the right time to strike. Anything short of that will result in a shift and painful death, where we lose all of our experience and get sent back to the nearest bonfire.

This is a large part of what makes the Dark Souls franchise notoriously frustrating. It's easy to get in over your head and lose hours of progress. The good news is that our hero can pick up the dropped souls, but that means making it all the way back to where you originally died. This is made even tougher because all of the nasty enemies have been resurrected. The game is constantly pushing you to explore the strange and twisted environments, but straying too far from the bonfire can be genuinely horrifying. 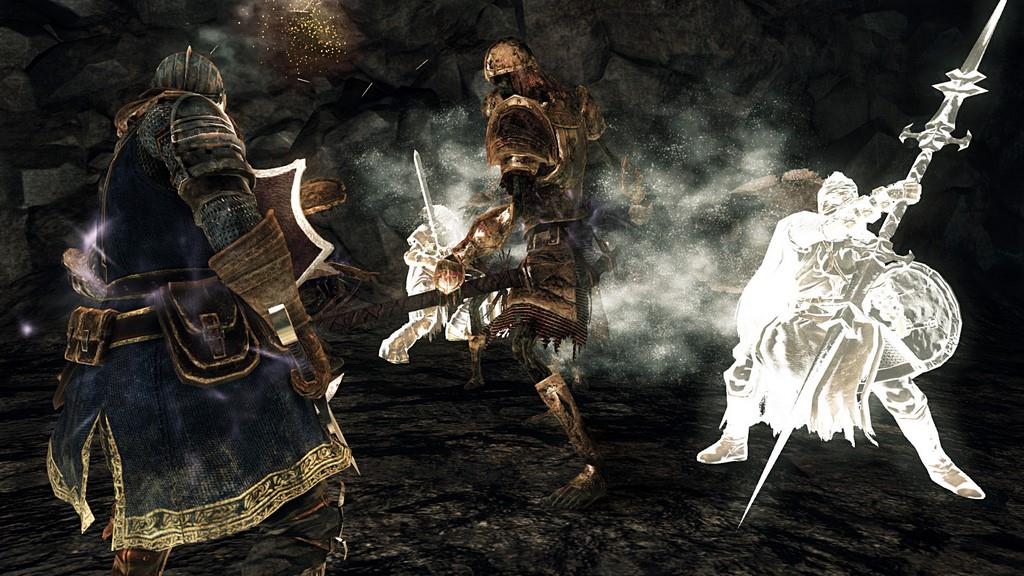 As with the 2011 original, there came a point where Dark Souls II started to click. It didn't come from leveling up my hero or finding a powerful sword, but rather understanding what the game expected of me. I studied every enemy and mastered the art of a hasty escape, finally giving me power over this cruel, unforgiving world.

I also came to the realization that I'm not alone in this struggle. While so much of the game feels hopeless, it's comforting to know that there are other people trying to overcome the same obstacles. These players can leave tips and messages for their fellow adventurers, making the hostile environment a little easier to navigate. You can also summon other people to help you take down especially tough enemies and retrieve your lost souls.

Of course, all that confidence came crashing down the moment I ran into one of the game's many boss creatures. There are dozens of these fights, each more epic than the last. Many of the boss characters are massive, towering over the player like a skyscraper. But size doesn't always matter, and many of the smaller creatures prove to be even tougher to take down. You'll run into skeletal horses, overgrown rats, the Lava King, gargoyles, dragons and an especially nasty character that looks like a demonic Jabba the Hutt. 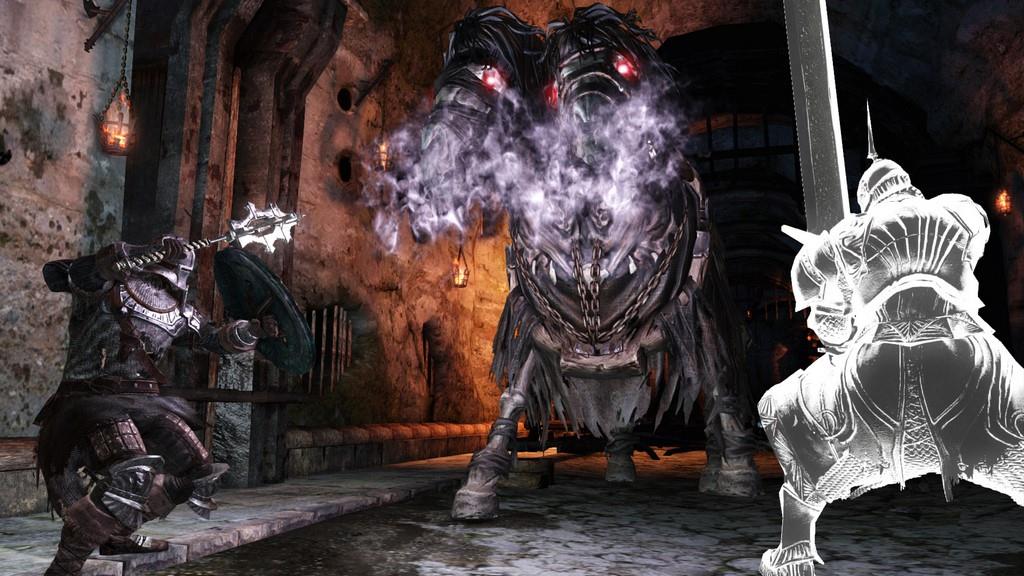 It's easy to fall into the habit of talking exclusively about Dark Soul's difficulty, but that's just part of what makes these games so beloved by fans. This is as much about discovery as it is testing your skills. The story isn't conveyed in lengthy cut scenes, but rather through drips and drabs of information from items you pick up and people you meet. There's no hand-holding in this series, and that ultimately makes every discovery that much more rewarding.

Between the main quest and the three expansions, there's a lot of game in Scholar of the First Sin. I can see gamers spending well over a hundred hours carefully exploring every nook and cranny. But even if you aren't that obsessive, it will take serious commitment to collect all the souls and complete the game. This is not the kind of game you complete in a weekend, and the events in Dark Souls II will stick with you long after the battle has been won.

Thanks to the tweaks made to the world and enemies, this remastered collection ends up being even more difficult than the 2014 release. Those new to the game may be surprised by how challenging it is right off the bat, but this gives veterans a reason to revisit Drangleic. It doesn't hurt that even the grimiest dungeons look stunning on the PlayStation 4. And locked at 60 frames-per-second, Scholar of the First Sin feels like a whole new experience.

Despite what you may have heard, Dark Souls II is not an action game. It has all the trappings of a thrilling adventure, but in reality it's a game about survival. Every new location is daring you to make it through alive. And while the test may seem overwhelming at first, with a little practice and patience, anything can be overcome. That's a surprisingly optimistic theme for a game filled with death and gore.

Whether you're new to Dark Souls II or played it on older consoles, Scholar of the First Sin is worth revisiting. This PlayStation 4 collection features the original game, along with the three expansion packs. The result is as rewarding as it is frustrating. And thanks to substantial tweaks made to the world and enemy AI, there's more than enough incentive to suck series veterans back into one of the best adventure games of all time.