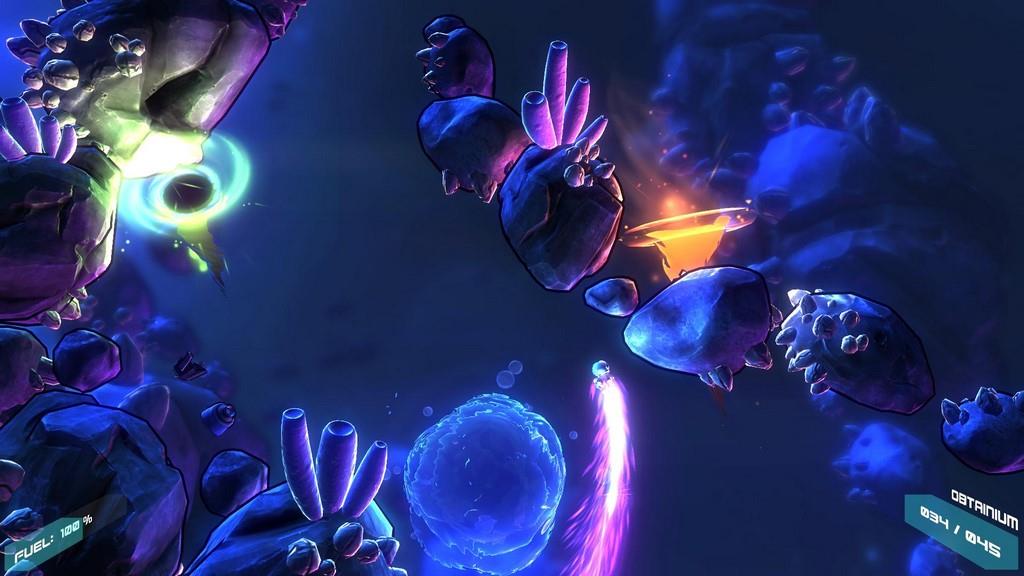 In Lost Orbit, you pilot Harrison, a stranded signal repairman, along his long trek back from deep space. You are followed on this journey by Null, and AI robot that serves as the narrator for the story and Harrison's companion. Across the 40 levels in the Campaign you pick up Obtanium to upgrade your abilities and dodge, dip, dive, duck, and dodge obstacles across the cosmos. From the very start, I found the game endearing, and ultimately that's what has stuck with me. I really bought into the story that PixelNAUTS weaved so excellently through what could have been just another time trial runner. This is a game with heart and with soul. It is not without its faults, but it toes a line where games become art and crafts a wonderful tale, one that is mostly about loneliness.

Yet in the midst of this fine and touching narrative, there was so much made of the blood and gore that accompanies every misstep. It's a runner, so ultimately you will die a lot. This post on the Playstation Blog details what the designers hoped to accomplish with the death scenes, but in my opinion, its the only place where the story falls flat. They have this wonderful endearing tale and they they go slapstick every time you hit a rock. Not to mention the very emblem for getting a bronze rank on a given level shows his suit helmet cracked and drenched in blood. I'm not against gore in games, but here it just feels entirely out of place. Why not go all in and add an agonizing death scream over the sound of gurgling blood while you're at it? That would seem obviously out of place, rather than just the little bit as it stands, but I could have done without any of the gore.

The game looks and sounds fantastic. The graphics are well done, just comical enough to keep you in the space the narrative creates and simple enough not to confuse the screen when things really get going with speed. If the visuals are good, the audio is something even better. There is an addicting soundtrack of electro pop that sets the stage for the levels. Even the pause screen is complimented by a catchy little repeating drum beat. Hearing Harrison let out a "Woo-hoo!" whenever he catches a boost just right feels so satisfying, like you really are giving a brief moment of joy to a lonely man lost in the vastness of space. And that "Woo-hoo!" is noticeably muffled to the point it very obviously has come from inside the helmet of our hero's spacesuit. There is great attention to detail in the little things like this that permeate the game.

However, the biggest problem the game suffers is the wonky controls. Simply put, the game is a top down 3rd person runner but plays off a first person control scheme. Press left to steer left, right for right, shoulder triggers do barrel rolls in that direction, boost with X, etc. But it's not actually orientated to the 3rd person perspective of what you're actually seeing on the screen, but rather the 1st person perspective of the character whose eyes you never actually get to look through. It works ok when your flying more or less pointed towards the top of the screen, but if you find yourself tracking sideways (which you must do fairly often) or, god forbid, going backwards then all the intuition of the control scheme is out the window. Then there's the problem that while at low speeds Harrison is pretty shifty, get some momentum behind you and he starts turning like a boat. Considering obstacles are going to be flying in from multiple angles and the fact that a major facet of the game is in time trialling the levels, you are nudged to chase the thrill of that speed, but aren't rewarded with a control scheme that can bear the load. Becoming good at piloting Harrison ends up having more do with level memorization than actually being any good at the control stick.

Then there is the issue that while you can collect Obtanium, and get rewarded with some more for achieving top marks on the levels, and can use that Obtanium to upgrade your abilities, you're never really taught how to use those abilities, nor are they even necessary. The boost is obvious enough and getting Obtanium magnets to make collection a little easier pays off handsomely, but barrel rolls have very limited use, I kept forgetting I had an air brake which rarely actually stopped me in time and was almost never preferable to trying to steer myself out of trouble, and the bombs -  I never could figure out what they were even for. The entire game can be beaten without ever upgrading one piece of kit, so I'm left wondering what function those upgrades really serve?

The last little issue I had with the game was the lack of a Platinum trophy. Even if you're not a Trophy hound, trying to get 100% completion in this game is going to be a grind and is going to be hard. There are much easier games out there that offer platinums yet in Lost Orbit you have the herculean task  of just trying to get the gold trophy for top marks on every level (no deaths, collect all Obtanium, and do so in under a given time that is nearly impossible to obtain without fully upgrading your boost and choosing near perfect lines at breakneck speeds).

This game is good, but it feels like it could have been great. Tighter controls, less linear levels, more use for the power ups and this game could have been truly great. Give me a lot more asteroid fields and lot less static barriers coming at high speeds from just offscreen or chains of little portals that give the illusion of going fast and making the right choices when all I really did was hit boost in a straight line. The game has about 40 levels but each take about 2-3 minutes to complete. Even with deaths and restarts you can burn through them all at around 5 minutes apiece, so you're probably looking at completing the campaign in a little over 3 hours. At that point all you're left with are time trials and trying to platinum rank each level, but with the wonky controls scheme and lack of a platinum trophy for my efforts, as much I loved the story, I don't really see myself going back to this game to grind it out. I believe it checks in at $11.99, which to me is a tad high given I'm not convinced of its re-playability. Find it on sale for under $10 and then I'd feel a little more comfortable with the purchase.

Lost Orbit features an endearing story that is wrapped in a wonderful package with great attention to detail. However, even at 40 levels, the game is over too soon and the wonky controls can be problematic for a genre that requires lighting fast timing. It's a good game that tells a narrative that will stick in my heart long after I've forgotten about the gameplay.