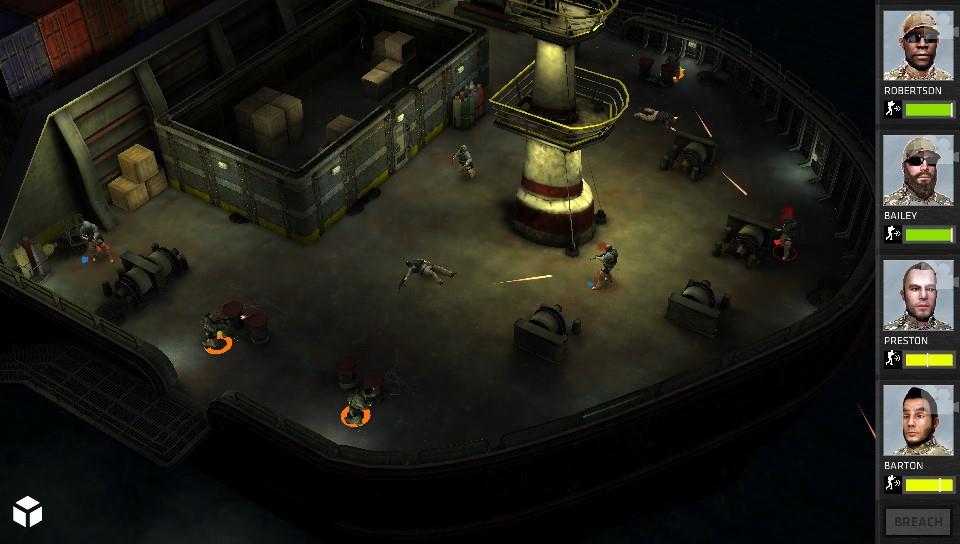 Ever since I played X-COMM: Enemy Unknown, I have fallen in love with the turn based strategy genre of games. Like most of my interests, the game just came out of nowhere for me and got me hooked immediately, so when I had to opportunity to review Breach and Clear for the Vita, I jumped right on it. Breach and Clear is a decent strategy game which most people will enjoy, but the problem is that the game offers little variety that the game becomes old after only a couple of sittings.

At the beginning of the game you will create a squad. You create four different characters, each with their own unique look and class. The classes are the Fireteam Leader, who deals heavy damage, the Medic who can heal teammates, the Weapons Sargent, Intelligence, the Breacher. Of course with each class comes their own set of stats so it's important to make sure you have a well rounded team that can cover all the bases. Breach and Clear's gameplay, like most strategy game, involves planning out all of the moves of your team in single turns. On most game modes, when you start, you get the option to deploy your team behind doors around the outside of the area you are about to storm. You can have all four of your guys go through one door, or split them up and have them enter from multiple areas. The one thing I like about the game is that you can plot different points for your characters to look at while moving to a location. You can have two guys storm into a room have one guy look to the left, one look to the right and one look ahead as they storm the building. Your soldiers will automatically fire when an enemy is in range so you won't have to worry about selecting targets. This also means that enemies will fire when you are in their sight also. You get various gadgets at your disposal as well such as flashbangs and frag grenades which are incredibly useful if you are about to entire a room with a ton of places you could be ambushed from.

The game has three main game modes. Terrorist Hunt where you have to take out all the enemies on the map. You need to make sure to hide behind cover because the enemies won't appear until you actually enter the room, so if you just rush into the room and out into the open, you will get taken down rather quick. Bomb Defusal where you have to defuse a bomb located somewhere on the map and Escape Plan where your team starts inside and has to find a way out to a designated escape point without getting killed. All of the game modes are played on the same maps and there are various difficulty settings you can choose as well. Out of all the game modes, bomb defusal is my favorite as I feel it provides the most challenge. The bomb is located somewhere on the map and you don't know where it is until you actually enter the room. You are also being timed and the game doesn't end as soon as you find the bomb. You need to keep one of your guys on the bomb and it takes around three turns or so to actually defuse it. This takes around 5-10 seconds to complete so you need to make sure you have enough time left on the clock to actually defuse the bomb.

Unfortunately, the game uses the incredibly annoying stars and unlocks system so of course, new levels won't open up until you achieve a certain number of stars. If you are just skimming by and only getting one star on each level, you won't be playing much. The game does provide a challenge but the problem is that it becomes extremely monotonous after a bit. Sure there are multiple game modes and difficulty settings, but none of them really change up the game much. Another problem I had was the absolutely confusing menu system which is really difficult to read. For whatever reason, the text on screen in incredibly small. Remember when you tried to play the original Dead Rising on a standard definition TV? I was having horrible flashbacks to that while playing Breach and Clear. Luckily there really isn't that much text to read as there is no story mode to speak of and since there isn't a story, there really isn't any reason to read the text above each level and care about why you are hunting terrorists in China or Afghanistan. 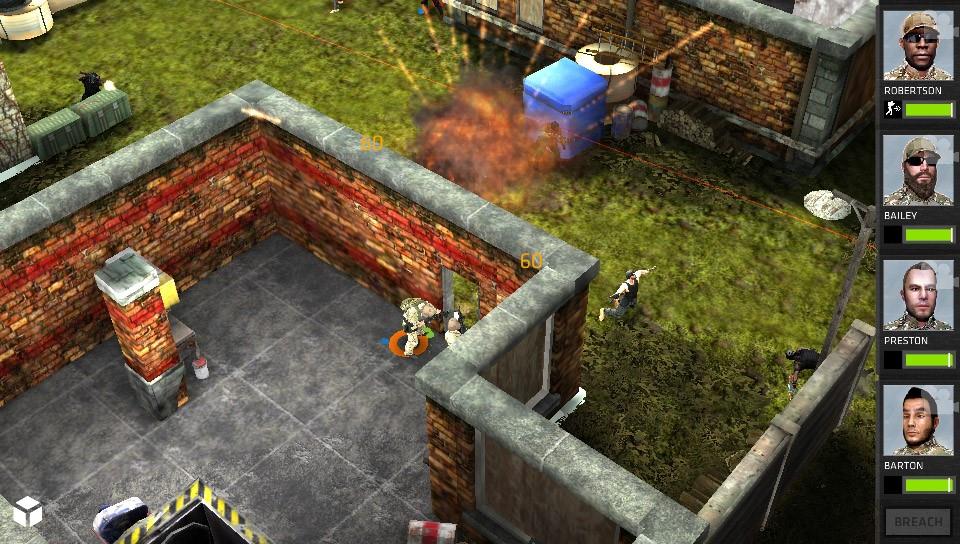 The game does provide some fun at first, but after a while the novelty begins to wear off as you are pretty much doing the same thing in every level. This isn't something like X-Comm where you have a meta game where you have to recruit soldiers, set up bases, or even train your characters. It's simply finish, level after level, collect stars, unlock more levels. The visuals aren't anything to write home about either. The most annoying thing I found about this game however is the camera controls. Trying to maneuver the camera around when trying to position where you want your squad is extremely frustrating. I found myself having to constantly zoom in, zoom out, swing the camera around just to see what may be around a door in a level. This also becomes a chore when you have your squad split up on some of the bigger levels you unlock later in the game. One time when planning out my next turn, I couldn't figure out why I couldn't select one of my squad mates. Then I figured out that he was actually taken out during the last turn. When did that happen? I had no idea cause I couldn't what a couple of my squadmates were doing. I couldn't even see the enemy that took him out cause he was hiding in some shack in a marketplace that I couldn't see until I took my next turn and saw where one of my squadmates was shooting.

The one thing the game does extremely well however is its marketplace. Here you will find a plethora of guns, lights, grips, IR devices, suppressors, and gas systems which you can buy and equip on your weapons. You can also buy various gear that you can outfit on your squad and some of the clothing will even give you a stat boost. If you are the kind of person that loves to collect items like this, then you will find reason to keep going back into missions to earn some more cash. All in all, Breach and Clear does provide some fun, unfortunately the fun quickly wears thin once you realize that you pretty much do the exact same thing throughout all the levels. Even though the game provides three game modes, and while they are fun at first, again, they don't really differ much from each other and unless you want a challenge by upping the difficulty, there was little reason for me to come back to the game after a few sittings.

Breach and Clear offers some turn based, strategy fun, but the game really lacks variety. The most fun I got out of the game was buying things from the marketplace and upgrading my squad, but even that gets old after a while. Decent, but not great.