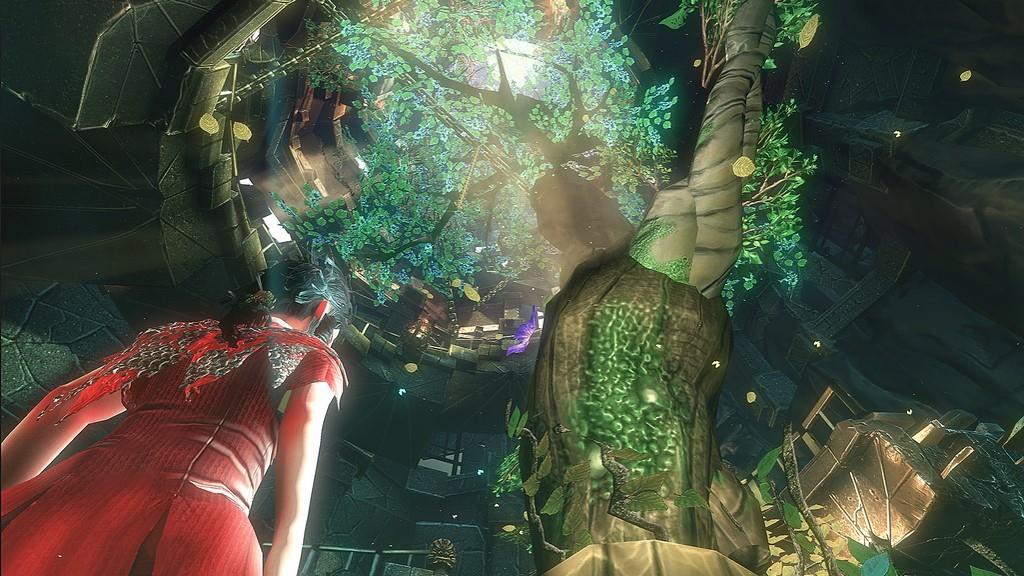 Video games are complicated these days. There are so many facets to what gives any game its identity. There are games like Skyrim that have nearly infinite gameplay possibilities, focused on how you play with not much focus on the narrative arc. On the other hand, there are games like Heavy Rain, with layered, meaningful stories and deep characters, but very little in the way of gameplay. This division of story focus and gameplay focus has nearly infinite shades of gray between the two poles, with things like Grand Theft Auto, Assassin's Creed, and probably the majority of games today landing somewhere in the middle of them.

Toren is unique because it avoids both of these extremes by having a small amount of gameplay and a small amount of narrative. That sounds like a blatant criticism, but it isn't. Toren substitutes complex gameplay and narrative for enormous and, at times, nearly all-consuming amounts of atmosphere and subtlety. It's a very specific kind of game, one that you'll have to allow yourself to sink into, and one that requires you to pay attention. That's not to say Toren is shallow in story or gameplay, but it's more about the world of the game than the action.

Toren is a strange little game, and both of those adjectives are important independently. It's strange, and it's little. It has times where it's captivating, and times where it's more than a little tedious. But there's some really great visual design here, and though the gameplay itself mostly misses the mark, you'll likely be drawn into the world of Toren, if only for a short time. I've not been so divided on my feelings of a game in quite some time, and I think that's because it's been awhile since I've played a game that simultaneously hits home runs and strikes out as frequently as Toren does.

Toren takes place entirely within a single tower in what appears to be a vast landscape filled with nothingness. This tower, which is itself a crumbling, dilapidated structure, is situated in what looks like a sprawling desert with little sign of life or civilization anywhere else. It's implied that this tower is the last bastion of life in this world, and now is under threat from a mysterious black dragon. Our heroine, the stylishly ambiguous Moonchild, starts the game as a toddler and ends it as a powerful warrior woman, at first following the guidance of a wise old mage before becoming her own person; her journey from the bottom of the tower to the precipice is both a literal and symbolic tale of a loss of innocence and coming of age. 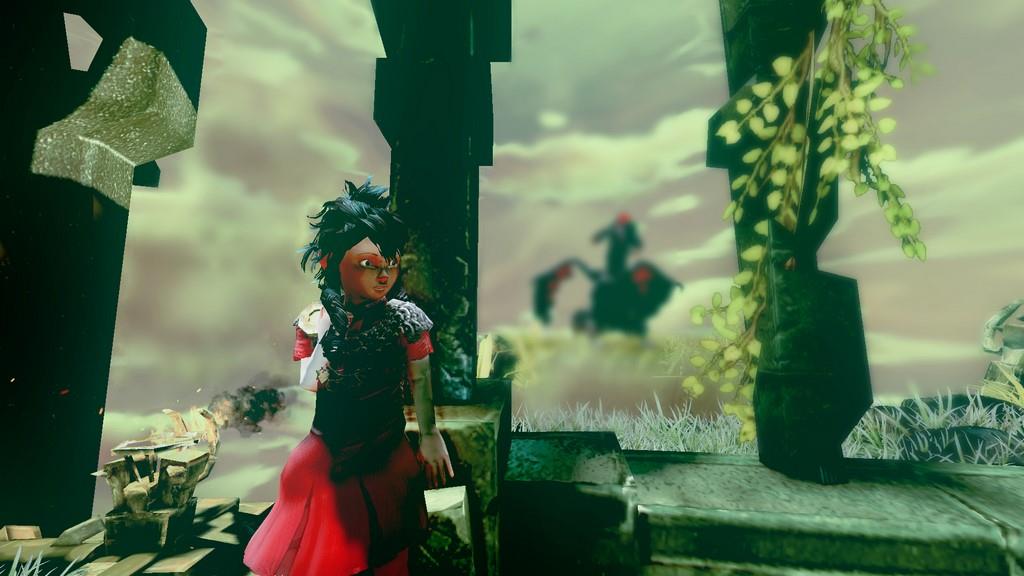 Climbing up the tower gives the game and the world a sense of foreboding and urgency. The game is short, but it's paced well. The story of Toren is told mostly visually, and while the it looks great, there's an important distinction to be made: the visuals are wonderful, but the graphics are just shy of bad. The art style, the camera angles, the colors, all of the aesthetic elements of the look work to create this sense of atmosphere I've been talking about. But the technical aspects of the graphics are not as good. Textures tend to be low res and pixelated, the character model is awkward, with weird hair that clips in and out of her body. It's almost like a movie that is shot beautifully on bad quality film. It's a very beautiful, at times striking world, but unfortunately populated with choppy, blocky models. Despite this, the visual aspect of the game is one of its best; you are never short of epic vistas and mysterious, otherworldly landscapes to ogle, and the quality of the art direction outweighs that disappointing graphics by a significant amount.

The most important part of Toren is the art design, and it's clearly the best part as well. Toren uses a fixed camera in order to force you to see the game in a very cinematic way, and the colors and images are all striking. Some parts of the game actually made me stop and say, "Wow," out loud to myself. But when you start to pay attention to textures and models, you realize that they leave a lot to be desired. The most egregious graphical aspect of the game is the main character herself, whose character model is awkward and rough, with particularly bad-looking hair. From an artistic standpoint, the game looks great, but from a technical standpoint, it's subpar. 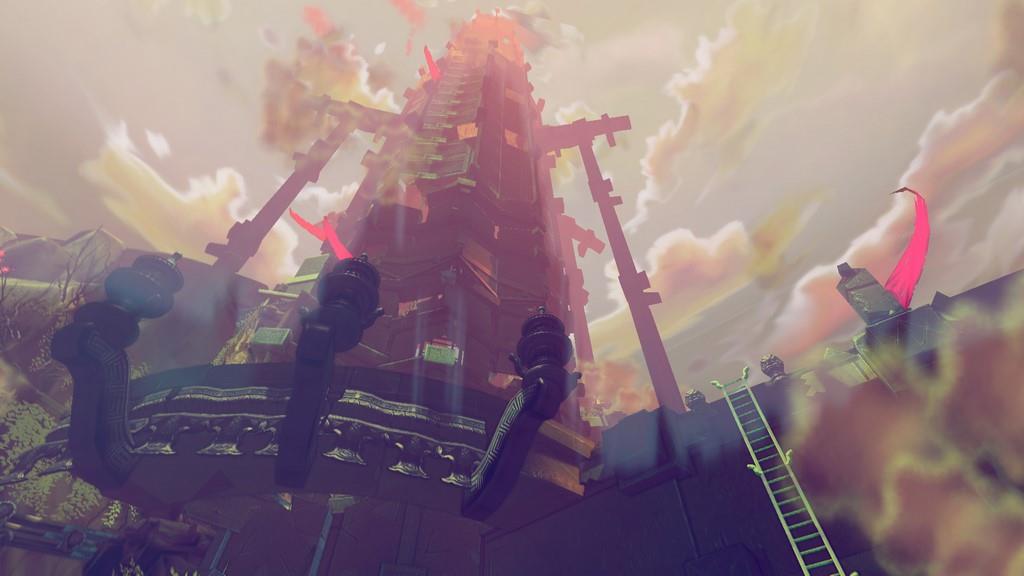 The music is probably the second-most important part of Toren, and it complements the surreal, dreamlike quality of the game perfectly. There are a few parts of the soundtrack that repeat a little too much, with the entire piece being made up of maybe 12 or so chords, but I even started to like this eventually. It became almost like a trance when coupled with the surreal visuals, and the fact that I can vividly remember most of the dream sequences speaks volumes to how well the music and visuals manage to pull you in.

But just as easily as the presentation pulled me in, the gameplay pulled me back out. The game is only about two hours long, but even within that short time I got tired of most of the gameplay mechanics. Boss encounters are presented as puzzles, and the first minute or so, when the objective is figuring out said puzzle, it's interesting and engaging. But once you've figured it out, it just becomes a cycle of rinse and repeat, made worse by the extremely clunky combat mechanics. Because of this, the aforementioned dream sequences are where the game really shines. These segments are light on gameplay and heavy on atmosphere, and I was completely drawn in by most of them. One of them has a really annoying mechanic that makes you use lightning as a light source, and really halts the momentum, but for the most part they are extremely well done. 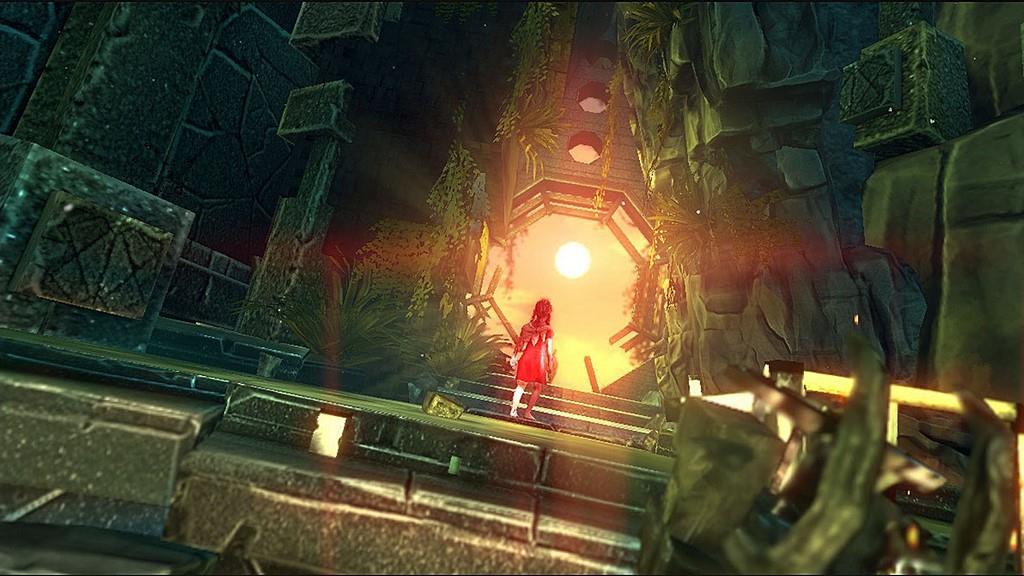 Toren also seems to be undecided on whether or not it wants to show you things, or tell you things. Your path will be illuminated by camera angles showing you where you need to go, and I really appreciate the show-don't-tell philosophy it takes with some of its gameplay. The story, however, is a mixed bag in this way. Some of it is told through imagery, with changing seasons and your character growing older, but a significant chunk of it is told through text. That's not an actual problem, but I would have preferred it to be told through the environment and gameplay. I think that would have fit the tone of the game a little more. It's also worth noting that the story doesn't make a huge amount of sense, at least after one or two playthroughs of the game. The end credits give a little more insight into the meaning, but the way I understood it actually made it all seem a little heavy-handed and overly philosophical. It's just as possible that I misunderstood, though, so your mileage may vary.

When the credits began to roll at the end of Toren, I couldn't help but feel that I had only played the first part of a larger game. If played straight through without the supplementary dream sequences, the game would feel more like a single dungeon in, say, a Zelda game, rather than an entire game by itself. And, like Zelda dungeons, it is a contained experience that teaches you a few things one at a time that you'll need to incorporate to progress. Part of me really appreciated this focus, but it's hard to deny that Toren does not feel like a whole game. There are some good things here for sure; the music and general atmosphere and ambiance of the game, and particularly of the dream sequences within, are top notch and just about perfect. The approach to the story and the use of symbolism are engaging as well, if perhaps a bit too vague for some people. But there are some unpolished and clunky things as well, like the controls and some of the graphical issues, which are hard to justify with such a short game. If a game is going to only be two hours, those two hours better be perfect, and unfortunately that's not the case here. If you are okay with setting aside your need for an immediately rewarding experience and are willing to let yourself be absorbed into the world of Toren, it is worth looking into. The less refined parts of the game do, sadly, often work against your ability to be absorbed, and as it's already light on traditional game mechanics as is, Toren won't work for everyone.

I realized at the end of my time with Toren that my favorite parts of the game were the ones that didn't have gameplay, as strange as that is. I don't know if this is a compliment to the art direction, or a criticism of the gameplay, but just moving through my surroundings was so much more enjoyable than solving the puzzles. I think that's where the dividing line will be for other people as well; if you want gameplay, look elsewhere, but if you want some really absorbing visuals and atmosphere, you'll find them with Toren.

Because it's such a small game, there isn't all that much to it; it's not a game with something for everyone. Still, even if you're interested, remember that the game is only two hours long, even though it's a very focused two hours, some people may feel they have overpaid for the amount of content they are given.