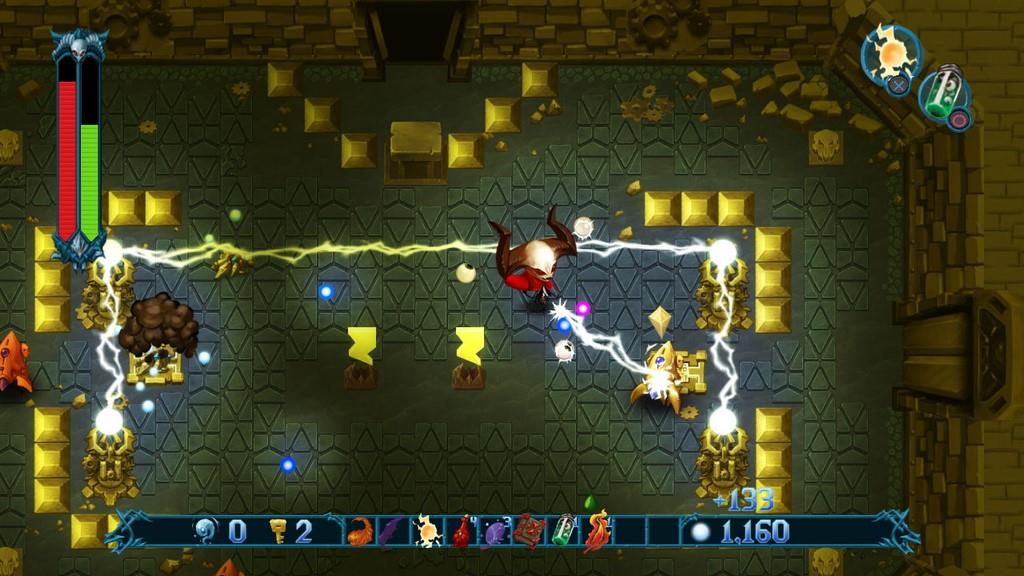 If there’s anything Rack N Ruin does right, it’s getting you to empathize with its antihero, Rack. I don’t mean feel sorry for Rack—I didn’t say sympathize. I said empathize. I’m talking about feeling like an antihero.

Rack (that’s you) is a servant of Ruin. Rack is a cute little fellow, for a bad guy, and a fairly capable destroyer of worlds. He has a complete disregard for creation. He is chaos and evil. But Ruin, his boss, has other plans. Ruin is trying to fit a leash around Rack. Ruin wants to subjugate all of creation, not just smash it to pieces. Ruin, in other words, is trying to call off his dog, Rack, and establish a little law over all this disorder. And Rack obeys. Reluctantly.

Rack is still very much an antihero, though. And you’re still very much subject to playing along with Rack’s antiheroics. When Rack starts yawning as some citizen waxes fantastical about dark legends and deep lore, then you too, as a player, will empathetically start yawning. When Rack laughs maniacally at a people’s god protector, then you will empathetically start laughing, too. Possibly even maniacally. I don’t know what it’s like in your home.

Rack doesn’t like much of anything, and there’s not much to like about Rack. He badmouths the working class, dismantles freedom of religion, and bites the hand that feeds. I mean, sure, he’s kind of adorable with his alien-shaped demon eyes, L-shaped horns, and tusk-like fangs. I guess he’s sort of cute with his dragging red cape and swishy devil-pointed tail. And when he laughs, it’s like his entire head opens up.

Armed at first with a simple fireball projectile, Rack tones down his world-destroying ways. Combat deceptively operates like a twin-stick shooter, except the second stick doesn’t do anything useful (shooting is relegated to thumb buttons). After only a short time, however, you’ll be selecting between fireballs, a jagged melee blade, and electrical currents. Each have dual uses, since these weapons also hit specific puzzle switches. 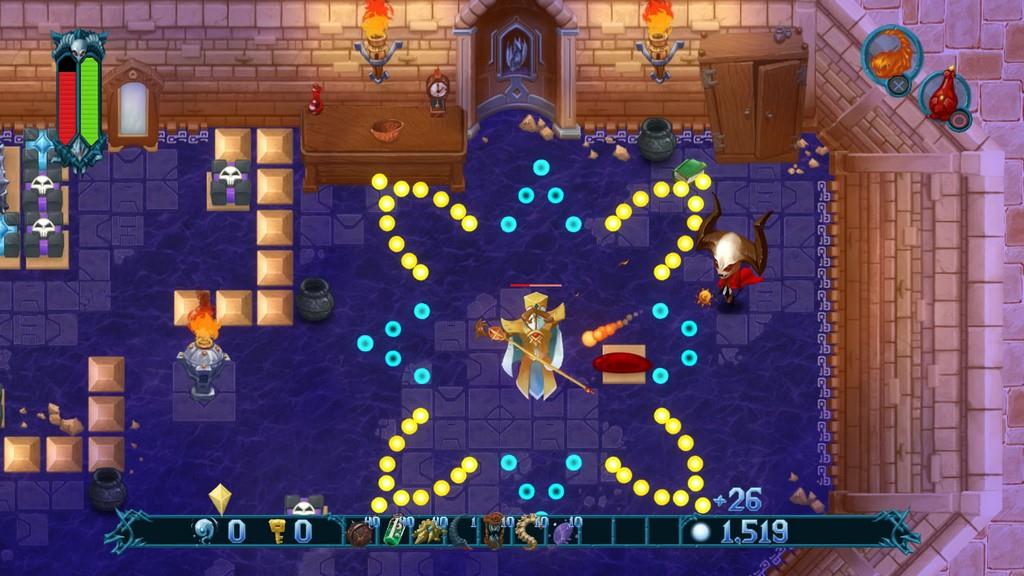 Puzzles crop up quite a bit in this world. You’ll telepathically drop a box onto a switchplate, or connect the dots with a bolt of lightning to unlock pathways, or chop a door switch that lowers a blockade. If you’re traveling in the woods, a doorway can look like a tree stump. In a steampunk ziggurat, it can look like a heavy dwarvish construction. Looks vary, but the concept is consistent.

The most compelling thought behind Rack N Ruin is its role reversal. You kill a people’s god, then get a cutscene of NPC heroes embarking on a quest to bring you down. Now see, that’s compelling storytelling right there. But those moments are entirely too few and far between. If I got updates on how this gathering of heroes was doing on their own quest to to destroy me, then I would be in for the whole nine. 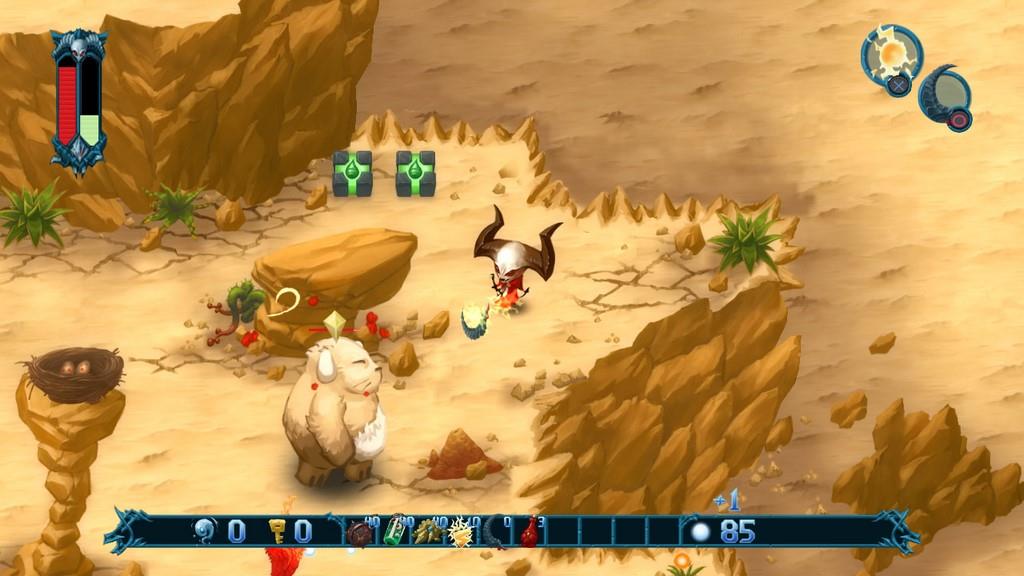 Getting lost is par for the course. I spent entirely too long wandering somewhere in the western desert, trying to find my way to the eastern edge of something else. Nothing pointed me in the right direction. Every path I took was blocked off. I was at my wit’s end. There’s a lovely world map, but seemingly nothing allowed me to fast travel, so I wandered 40 days and 40 nights through the desert, then through an endless maze of leafy trees and giant mushrooms. Then I searched through all of it again. I finally figured out the one place on the map that I could fast travel to. I nearly punched myself in the face once I found it. I didn’t have a clue before.

I collected a lot of little blue-white orbs during that time, though. The orbs simply pop out of creatures as you kill them. So you collect them. They’re currency for the one shop you may visit: It’s run by a white-haired hag in a Baba Yaga hut--you know, the kind of hut from Slavic folklore that stands on chicken legs.

These souls—this effervescent money—pops out of some pretty cute creatures, though. One-eyed rock turtles. Owlbear-like Totoros. Spear-wielding forest kitties that look like Kiss Army groupies. Lobster-shelled robots armed with the determination of a Portal turret. Even nesting Phoenixes that are every bit the nuisance Morrowind Cliff Racers once were. Even the cut-’em-in-two Jell-O molds are fun to hack into. 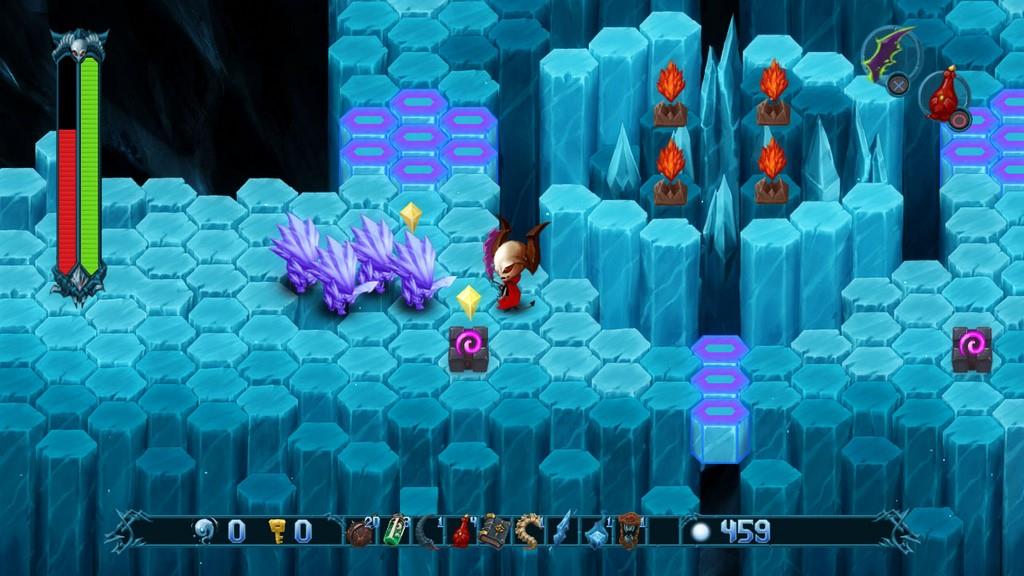 The boss fights are cool, too. Tough, but not impossible. Navigating the woods is impossible. Finding the right twist and turn out of the desert is impossible. The bosses aren’t, though. There’s a dragon with frosty breath. There’s a many-faced Incan head, or something like that, spinning itself into an anger tornado. I want more boss fights, but, like I said, finding them is half the battle.

The music is 100 percent low-rent fantasy. It’s all Casio keyboard trumpets, flutes, and glockenspeils. I’d hoped at first that a bad-guy anthem might follow me around, but no, the music is nailed to each region. Each portion of the map, from the ancient brutalist ruins to the fairy-infested deciduous trees, has its own soundtrack.

Your adventures in subjugation bring a stack of items into your inventory, nearly all of them offensive. My favorite is the simple, effective jar of eyeballs. The eyeballs spin around you and shoot at anything and everything within firing range. I’m also fond of the Wisp Dust. I sniffed two bags of it during my last boss fight, turning me into an invincible rainbow-raving machine. I know.

I have to mention the Blood of the Innocent while we’re here, too. It keeps your health meter fully juiced. And snacking on faerie wings fills up your magic meter. Magic drains from you when you activate your bubble shield or fire off a bolt of lightning. Breakable crates placed around the world sometimes drop off a vial or two of health and magic replenishments as well.

You are Rack. You serve Ruin. You kill gods. You incite would-be heroes to bring about your doom. You spread your blight across the land. It’s all in a day’s work.

Rack N Ruin is a twin-stick shooter (sort of) with a juvenile appreciation for wanton destruction. The role-reversal, with you as the bad guy, brings up some interesting questions, but the story doesn't take neart enough advantage of that fact. It can be good to be bad, but Rack N Ruin's character isn't all that deep.