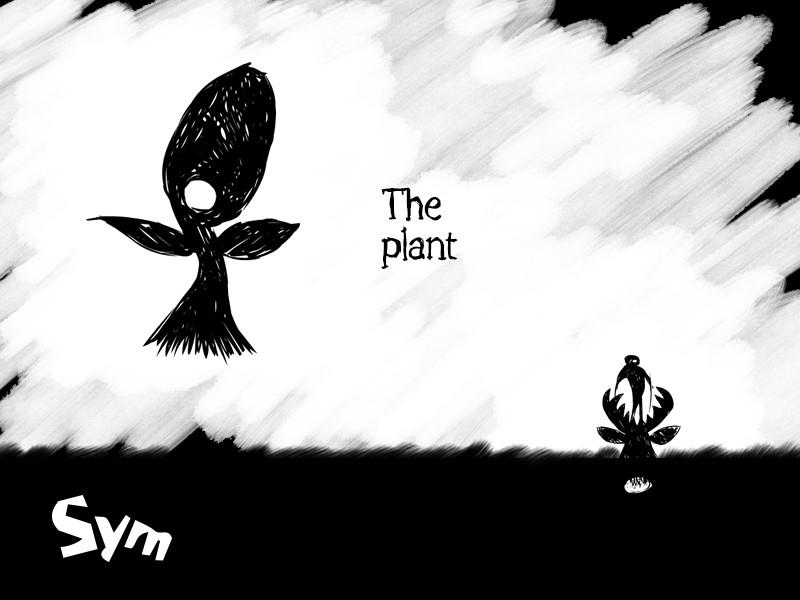 In concept, Sym seems like a fascinating idea, even a noble one. What if you could convey the complex and distressing realities of living with severe social anxiety through a video game? I have many friends who suffer from severe anxiety and I wouldn’t be at all surprised if I have a mild case myself, but as with most psychological illnesses describing what it’s actually like is maddeningly elusive. With issues like depression, anxiety and antisocial behavior, it’s very difficult to put the problem into words; something just feels wrong and the hardest part is you have no idea how to fix that feeling or even articulate it to ask for help.

Video games would seem like the perfect medium for communicating that persistent but nebulous sense of wrongness. Video games are unique among entertainment in that they can make you feel a fictional character’s emotions more clearly and strongly than you would get from a more passive experience. Video games are the only medium where you can feel the guilt or anxiety of a fictional character. For example the end of Metal Gear Solid 3 always hits me particularly hard, because I’m not just watching Snake kill his beloved mentor, I’m the one pulling the trigger. I’ve been in Snake’s head and walked in his boots for the past 20 hours; his struggles, hopes and fears have been my own. That final tearful salute before his mentor’s unmarked grave just kills me every time.

If games can effectively convey that kind of grief, loss and guilt, then surely they can help a player understand what a person with severe anxiety is going through, right? Well yes, but it takes a certain amount of time and subtlety, and above all a respect for the issue at hand. Several recent indie games have attempted to tackle psychological illness, but many have at best come off as pretentious and ham-fisted, and at worst opportunistic, cynical and downright insulting.  While Sym has the right idea in exploring anxiety, it doesn’t exactly come together into an effective package.

Sym is the story of Josh, a troubled teenager who lives as dual identities: Caleb, who lives in the light and seeks to overcome his fear, and Ammiel, who withdraws into darkness and seeks to isolate himself from everyone else. So far, so good—anxiety is often felt as dueling impulses. The social traits and hatred of loneliness are constantly at war with fear of rejection and insecurity. Unfortunately developer Atrax Games presented this dynamic through a 2D platformer, the go-to genre for indie studios everywhere.

I get it—platformers are quick, cheap and easy to make, and can be buoyed by a striking art style, something Sym definitely possesses. But so many indie studios have mined this style of gameplay that it’s very, very difficult to get yet another 2D platformer to stand out anymore. More often than not these games just end up as “press X to ponder the meaninglessness of existence” or “it’s a subversion of Super Mario, it’s so progressive guys!” Sym doesn’t sink to the achingly hipsterish pretense of many infamous indie games, but it isn’t exactly a great platformer and its message is a bit jumbled. 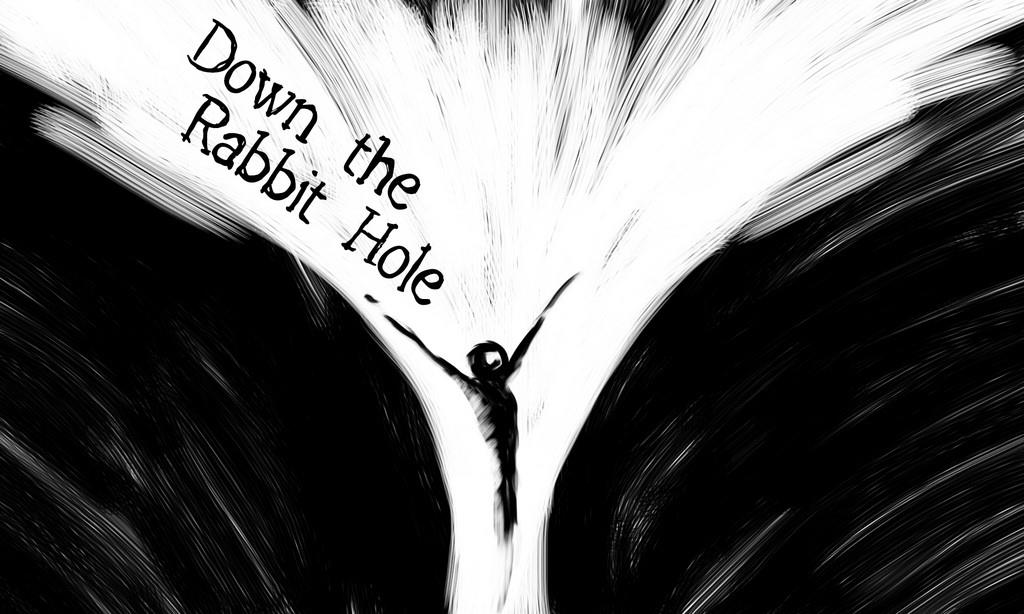 As Josh you explore a 2D world of stark duality—literally black and white—constructed of blocks and littered with hazards. The top of the screen is predominantly white while the bottom is mostly black, and the gimmick is that at any time Josh’s Caleb persona can sink into the shadows below and move around as Ammiel. This also reverses the gravity, much like the more traditional 2D sequences in the Mario Galaxy games.

This leads to some rather clever platforming early on. Impassable ledges of white become mere steps of shadow, while an impossible leap across a chasm from below becomes a solid pathway in the light. Switches generate new blocks and pathways that seemingly do nothing or just get in your way, until you change perspective and realize they open a whole new section of the level. This is probably where Sym is the most subtle in its message; sometimes Josh must reluctantly claw his way into the harsh, judgmental light to move forward, while at other times sinking into obscurity is the only way to cope with the crippling fear that there is no hope, no way out.

This basic gameplay is serviceable, but once Atrax tries to increase the complexity, both the mechanics and the game’s theme run into problems. To be frank, Sym isn’t a very solid platformer. The controls are floaty and imprecise, and your character’s hitbox is just a smidge bigger than the actual sprite. When the game tasks you with Mario-style pinpoint platforming, often by landing in a tiny safe space between two spinning sawblades, you’re going to die several times before you get the spacing right. Even worse, you must start a level from the beginning every time you die, so you can make it to the very end, mess up and have to do it all over again. 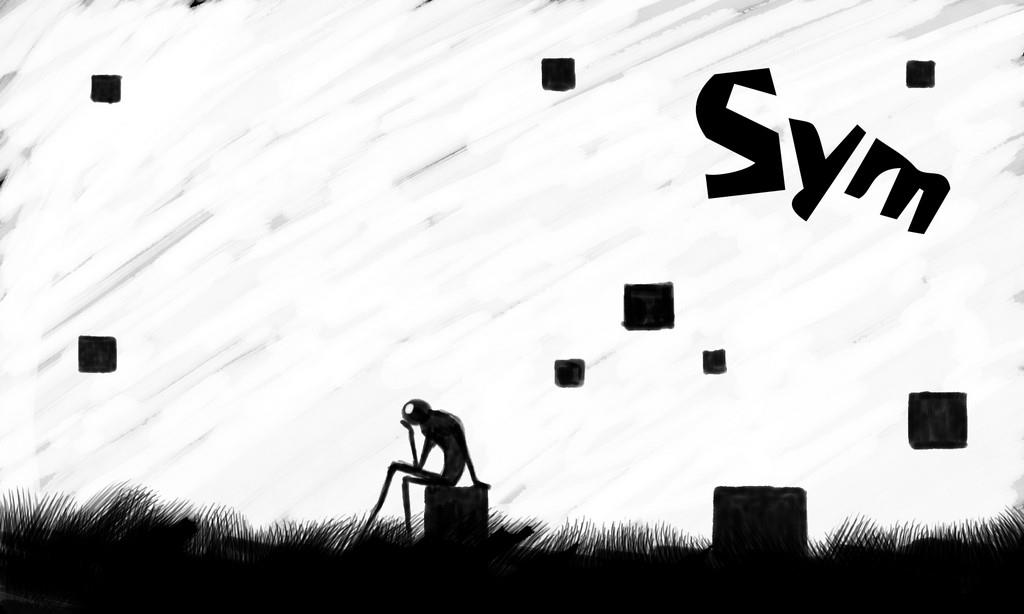 A few checkpoints would have alleviated this issue, especially in the later, harder levels that make you go much longer between saves. The bigger issue, however, is that beyond the basic premise the concept of social anxiety Josh never struggles with anything specific. The level architecture reinforces basic themes of anxiety; above in the light, giant eyes stare unblinkingly at Josh, whereas most of the hazards light sawblades and monsters exist below in the darkness. Melodramatic platitudes like “the pain never ends” and “I want to die” are scribbled in the empty spaces of the levels but they come off more angsty than poignant or haunting. It feels like you’re reading the notebook of a self-indulgent high-schooler.

I understand that to a degree, this is what teenage anxiety often looks like. A lot of the stuff I drew/wrote in high school is painfully myopic and self-centered, but it helped me cope with some of my fears. That said, I wish Sym has a stronger narrative through-line or gameplay that backed up what anxiety feels like. Maybe if Josh stands in front of the eyes too long, he can’t stand it and has to sink into the floor? This would require skilled timing, making sure you knew how long Josh, and by extension yourself, could hold out in a socially painful situation before retreating. All the while you’d have to make sure you weren’t sinking into the ground at a point where you’d fall into the sawblades—perhaps an analogy for being careful to not lose yourself to despair?

Sym prompts some intriguing self-reflection but I get the feeling that it’s mostly unintentional or at best subconsciously suggested. The whole experience is too broad and vague to really hit me with any lasting emotional impact. I enjoyed the sketchy, jittery art style and discordant soundtrack—like a fevered pen scribble—but it doesn’t evolve enough to stick with me or even stay affecting for the whole game’s length. Neither the visual style nor the very general concept of anxiety put forth by the game are enough to keep the gameplay fresh. In hard terms, Sym just isn’t a very enjoyable platformer. 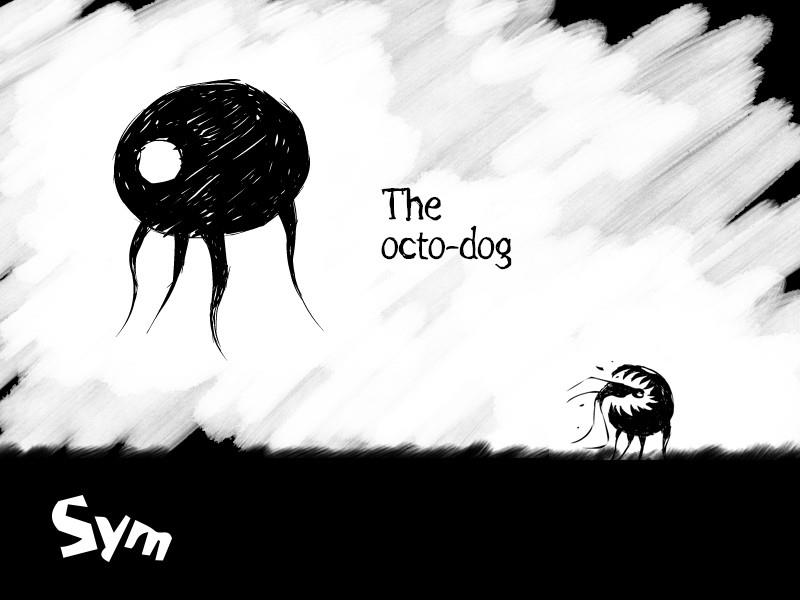 That may seem oxymoronic for me to say that—you’re not supposed to enjoy a game about anxiety, right? That may be true, but a platformer lives and dies on solid mechanics. Mario games can frustrate the hell out of me, not because they’re poorly made, but because they’re so challenging. In the case of Sym, the mechanics should have been good enough that it was Josh’s story and struggle that made me feel anxious and frustrated—not the platforming itself. The gameplay should be an engine for telling a personal story; instead it just distracted me from the themes, which weren’t all that compelling or focused to begin with.

I applaud Atrax for trying to make a game like Sym. They have the right idea but perhaps a 2D platformer just isn’t the right way to execute it. Maybe I’m wrong; maybe this game was the way one of the developers experienced anxiety and wanted to convey it. All I can say is personally, I didn’t find Sym to be a particularly enjoyable or affecting experience.

Sym is a valiant effort to convey how social anxiety feels, but its platforming mechanics aren't solid enough and distract from the story and themes. The art style is striking, but the story and thematic elements are too broad to leave a lasting impact.