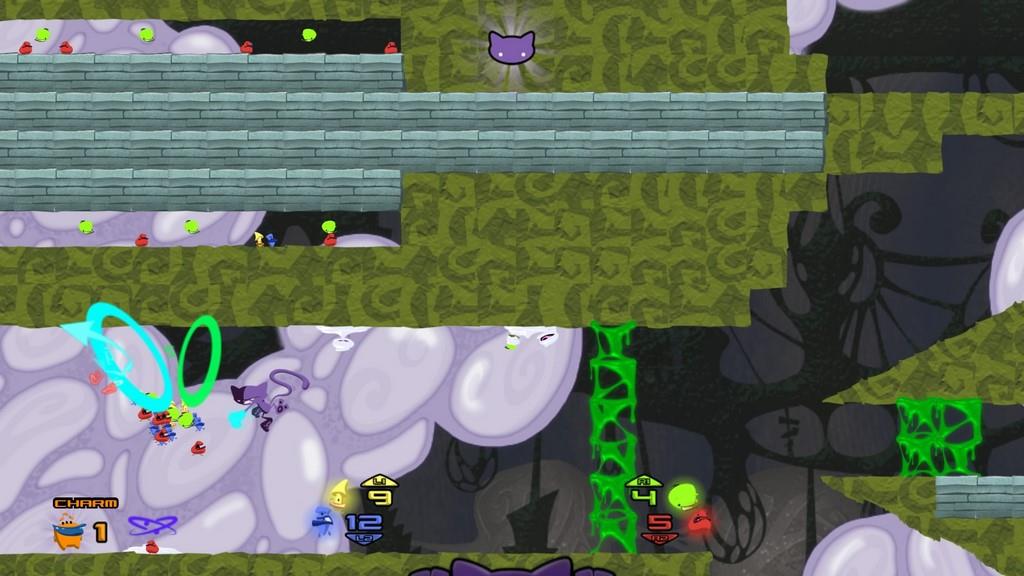 Schrodinger's Cat and the Raiders of the Lost Quark

Written by Michael Passalacqua on 6/10/2015 for PS4
More On: Schrodinger's Cat

Schrodinger's Cat and the Raiders of the Lost Quark is like Jurassic Park 3 with quantum physics. I specifically compare Schrodinger's Cat to the third installment because, like the movie, it’s pretty bad. The writing is cheesy, it’s full of boring procedurally generated levels, and the puzzles are mind-numbingly easy. But lying deep (deep) down is a cute little game that could charm you if you’re not paying attention.

I also compare it to Jurassic Park because the premise to Schrodinger's Cat is similar. Security at a zoo breaks down, its inhabitants break free, and sudden chaos ensues. The zoo’s director then calls on Schrodinger's Cat and his special powers to sort the scientific mess out and save the day. Your job will be to round up the escapees and send them back to their cages, but you’ll quickly realize that there’s a malignant antagonist with bigger goals for the universe’s supply of matter. The plot is less memorable than a few of the characters along the way, like Burt the talking tongue and his sidekick.

The big problem with the story is that it tries so desperately hard to be clever by forcing physics puns like “For the love of Higgs!” and “That motion was pretty Brownian!” down your throat. Admittedly, if you have some knowledge about quantum theory, the references can make you smile at first, but quickly become repetitive. Perhaps the most endearing quality, whether intentional or not, is the fact that I would look up these terms and puns as they came up to get a quick physics lesson from Wikipedia.

On the other hand, the gameplay features a pretty smart mechanic. Using R1, R2, L1, and L2, you’ll put Schrodinger’s Cat’s special ability to the test: The power to combine quarks to platform through levels. The quarks come in four main colors, but can be combined in groups of three to help you traverse the wacky world. It starts off pretty simple; three taps of L1 will combine three yellow quarks to form a copter that will carry you to platforms unreachable with a regular jump. A trio of blue quarks will destroy the ground under you. But you can also vary the combinations to pull off some other stunts. Combine one or two yellow quarks with one or two blues and you can fire a missile to destroy barriers above or to the sides. Combine red with green and you’ll form a mini trampoline. The 14 total quark blends work for the most part, and once you get them down you’ll start to get through levels with ease. In fact, it may be a bit too much ease because once you get the combos down, Schrodinger’s Cat isn’t all that hard to beat, especially for a puzzle-platformer. 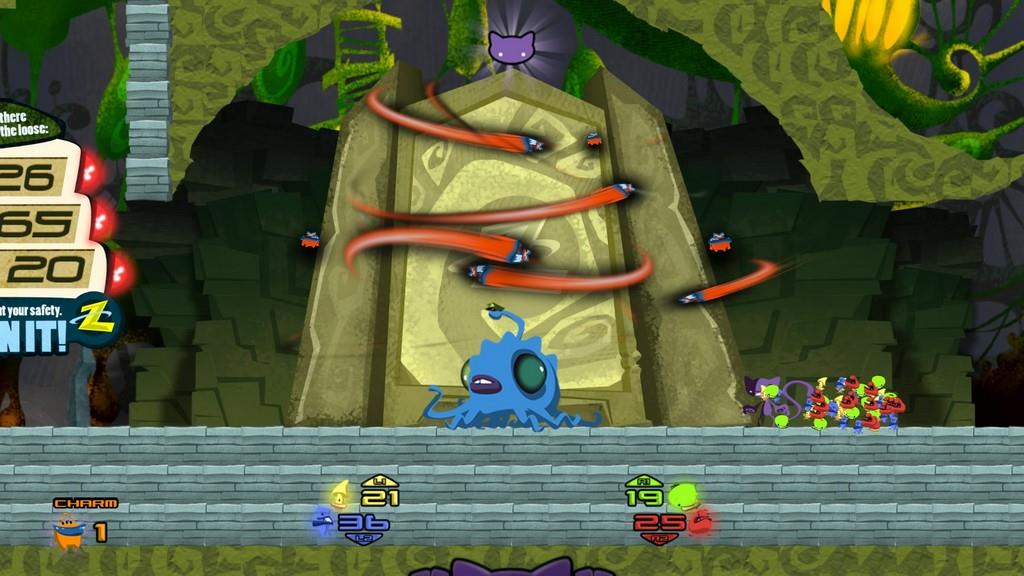 The other trouble with these levels is that they’re mostly uninspired, procedurally generated, and forgetful. Besides a change in background I really couldn’t tell the difference between one level and the next. The few hand-designed stages, on the flip side, only lay out a specific number of quarks to be collected and combined, meaning that if you screw up you’ll have to restart from a checkpoint. It’s another smart gameplay mechanic and makes things a bit tougher, but it highlights the fact that half of the levels are significantly more monotonous than the others. If the designers took an axe and chopped out the procedurally generated levels, Schrodinger’s Cat would be significantly better.

Underlying it all, however, is a game that carries a bit of delight. While the writing is cringeworthy at times, there were a few instances where I chuckled outloud, whether it was a security guard’s self-deprecating humor or the purposefully awkward rapport between Schrodinger's Cat and most of the other characters you’ll meet. The ambiance is also pretty winsome in a scientific sort of way. Environments are filled with goo-infested platforms, and the entourages of quarks that follow you around are colorful and cute, often yelling out phrases of “Yay!” and “Woo-hoo!” in a lovable scream when used correctly. Character designs are also outlandish enough to nail the tone the designers were going for.

I did run into a few bugs, though, that were too frustrating to look past. I would sometimes get clipped into platforms and enemies wouldn’t fully stick to the walls they were jumping to, meaning it wouldn’t register when I tried to knock them down. Some forgiving checkpoints made these problems mute, but a few instances, like in the handcrafted levels, I lost much of my stage progress.

Schrodinger's Cat and the Raiders of the Lost Quark seems like the perfect game for your kid to play. It’s a cute puzzle-platformer that can spark a scientific interest. Your kid could probably also look past the fact that it’s also a puzzle-platformer ripe with tacky one-liners, uninspired level design, and repetitive game play, all of which combine to ensure that it’s far from phystastic.