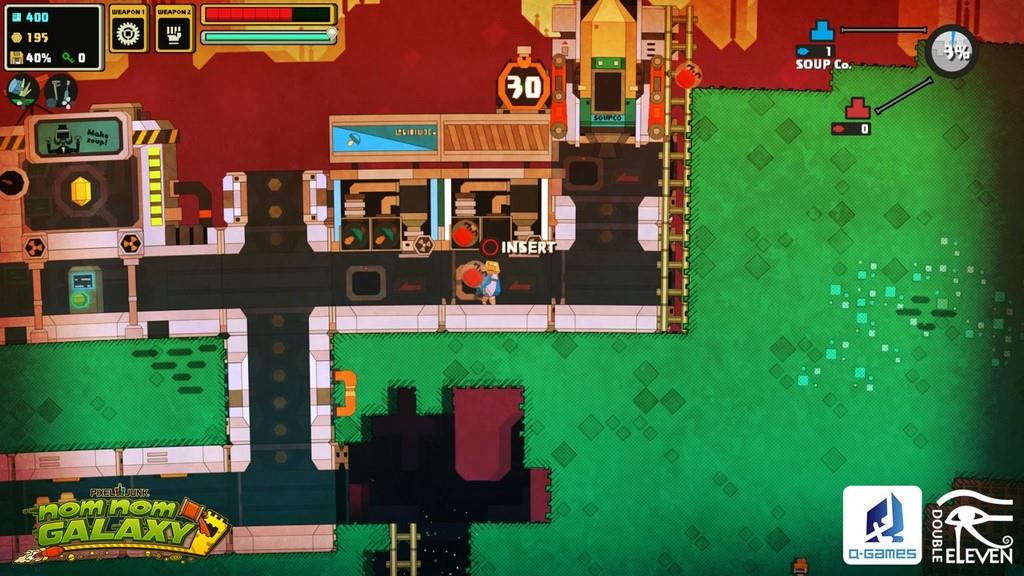 I like soup as much as the next person. Chicken noodle, tomato, minestrone, cream of mushroom. I’m not picky. But I’ll admit, I’ve never considered a logistic, soup-based takeover of the known universe. Nom Nom Galaxy, however, addresses this underserved segment of the video game market: The soup-centric 4X strategy game market. Explore, expand, exploit, and export. This game, in fact, may be an elaborate recruiting campaign quietly sponsored by the Campbell Soup Company.

Every level begins with you crash landing on a virginal, two-dimensional, Terraria-like planet. The crashing spacecraft grinds itself into a crater, and the explosion sheds a handful of salvageable building materials. Just enough to get you started. Your first step, without fail, is to establish a soup factory office somewhere on or just below the surface.

The office is headquarters. All of your soup factory’s infrastructure must link to this office. If it doesn’t, or if that link is severed, the rest of your base runs the risk of being cut off from power. For the most part, a building without power is useless, and a base without an office is game over.

You have one job, astroworker: Make soup. The clock is ticking. You have five minutes from the time you clock in till it’s time to call it a day. At the end of the day, you see a spreadsheet of your fiscal accomplishments. Then, if you haven’t yet cornered the market 100 percent, you start the next day.

You can spend each day exploring, digging through the planetary crust with your buzz saw, collecting flora, fighting fauna, building or restructuring your base, and fending off rival soup companies.

The complexity starts low and ramps up slowly. At first, you’re only building the basics. The office, the soup-making machines, connecting tunnels, and rockets to launch the soup into space--and into the mouths of your hungry customers. New technologies are introduced with each conquered planet. You’ll get conveyor belts and robots to help move ingredients and soup cans around, boosts to your abilities, and...a lot more unlockables.

These aren’t randomly generated worlds. Each one presents specific scenarios to contend with, whether they’re topographical challenges, resource scarcity, or consumer requirements. That’s the big picture. The minute-to-minute decisions keep things moving along at fast pace, too. Indecision cuts into your bottom line faster than a rival soup company’s hostile attacks.

Piecing together the puzzle of each world can be rewarding. Like finding steep, vertical terrain, but figuring out how to create gardens out of girders and transported soil. Or learning that pockets of oxygen will grow plants faster. Or concocting a map of conveyor belts, escalators, and robots that effectively do much of the heavy lifting for you.

Nom Nom Galaxy doesn’t tell you too much at first. It trusts you’ll be along for the ride long enough to appreciate the slow drip of broadening knowledge. I would’ve liked a little more information a little sooner, in one or two cases. I’d thought, for instance, that it was a bug that made all my resources disappear overnight during the day-night cycle. That is, until I stumbled across a screenshot online depicting a base-building element I hadn’t been given yet: storage. I was getting angry enough at the Case of the Disappearing Resources, however, to almost write a strongly worded tweet to the developers. Glad I didn’t. Would’ve been nice, regardless, if the game could’ve taken two seconds to explain why all my stuff was disappearing, though. 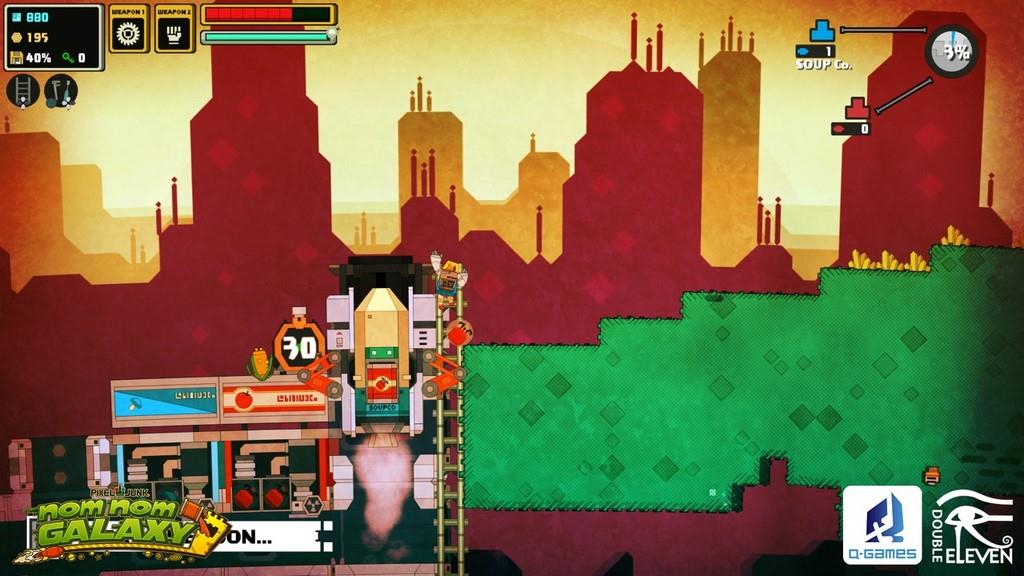 I dig the art style. The minimalist, geometric backdrops are fresh, clean, and spacious. Some backgrounds are dry and rural, others are chalky and urban. The collectible ingredients are easy to identify. The main character resembles a flappy-mouthed Canadian from South Park, but steeped in the flat textures of a classic Looney Tunes cartoon. And the helper bots walk around in pairs, holding hands, looking like an adorable little Ilomilo couple.

Nice soundtrack, too. It’s got some chill electronic tunes that I’d go into a late-night study session with. And on a mildly humorous note, before the bell rings at the end of the day, you hear a few seconds of that sound your cell phone makes when there’s an incoming call and it’s sitting too close to a speaker.

Nom Nom Galaxy’s visual and audio style go the distance in this retro-futuristic real-time strategy game. The writing, however--whether it’s newspaper headlines or tips from your robo assistant--is rarely clever; and this is a game that should be wall-to-wall in clever writing. Once you move beyond the cutesy title and the silly premise, Nom Nom Galaxy pretty much gives up on the idea of telling anymore jokes. It never takes itself too seriously, but it doesn’t exploit its sense of humor either. It felt like the missing ingredient to every can of soup was the punch line.

The premise behind Nom Nom Galaxy wears thin after a can or two. Its neatly focused premise and evolving puzzles don't progress at a rate to keep things stimulating for more than a few planets' worth of corporate conquest. The minimalist art is, at times, print worthy. The music makes me want to move back into a dorm room. But Nom Nom Galaxy doesn't often inspire the sense of exploratory wanderlust that should underpin Terraria-like worlds such as these. And the narrow gameplay and tightly wound clock makes everything feel like too much work, not enough play.