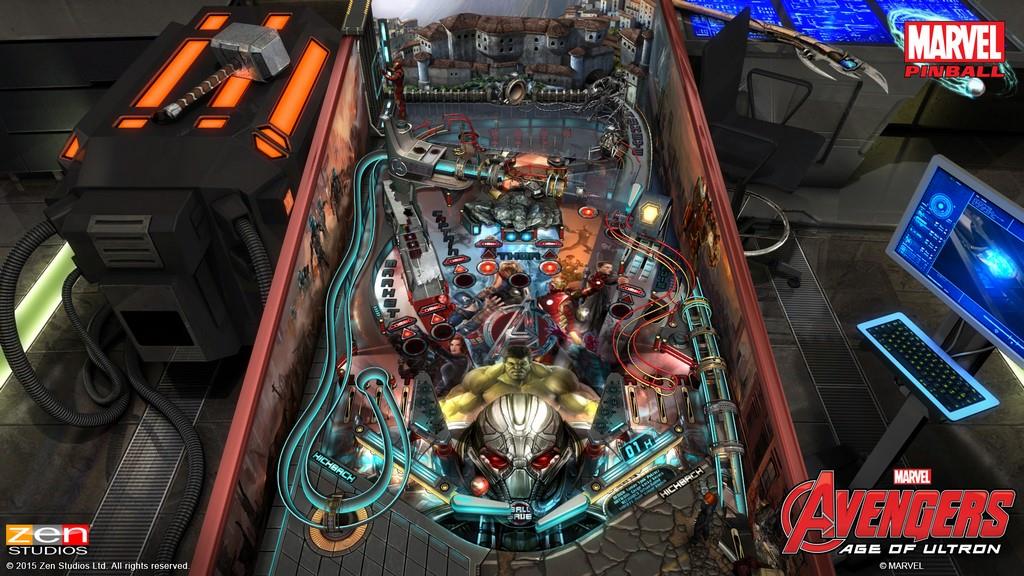 Written by Randy Kalista on 5/12/2015 for PS4
More On: Marvel’s Avengers: Age of Ultron Pinball

I haven’t seen Avengers: Age of Ultron in theaters. But if the Zen Pinball 2: Marvel’s Avengers–Age of Ultron table is any indication, the movie’s plot goes something like this: Iron Man builds a machine, machine goes on a destructive spree, Black Widow browbeats everyone for making mistakes, Captain America looks for people lost in the city, The Incredible Hulk needs some cuddling, and Thor constantly shows up, leaves, shows up, and leaves again.

To be fair, it’s difficult to tell a story with a couple flippers and bumpers on a table. I’m not typically interested in superhero comic books, but that doesn’t give this table any minus points. You’re safe, Marvel fans. Knowing that this is a superhero property gives it a fair amount of leeway in the storytelling department, considering the fact we’re playing on a pinball table here.

The Age of Ultron table’s plunger (the thing that launches the pinball at the start of each round) is Iron Man’s gloved hand. A hot glow from his palm rockets the ball about halfway up the table to a second floor. From there, a third flipper can help do one of four things: one, punch it across the table into the Avengers Tower (nice!); two, have it slide down a ramp into some bumpers at the back of the table (not bad!); three, run a railing back down to the right flipper (okay!); or four, more often than not, the ball will fall innocuously from the second floor back onto the table’s ground floor and head for the gutter (not great!). It may be too much to ask of a tertiary flipper.

This whole chunk of the table—the tower, the cave, the busted-car bumpers—is a total wreck. It’s a mess, and it’s supposed to look like a mess. It’s a heady contrast to the slowly circulating waves of coolant drawing the eye back up to the top of the table. 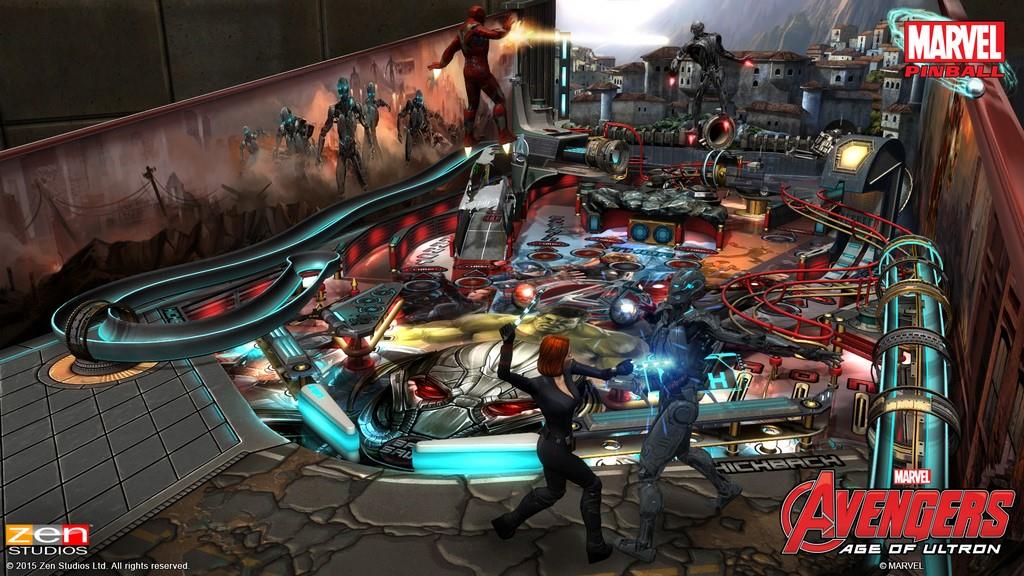 The back wall of the table is decorated with a standing Iron Man, a reclining Ultron (the villain in the title), and an incongruous Medieval-looking town. Having not seen the movie, I can only guess that this European backdrop is where Ultron hid to build an army of sentinels. There’s no visual coherency to much of this table. That’s not to say it doesn’t work. But you’ll have to fill in the blanks as to why all these disparate elements appear together in one place.

The back of the table moves slowly, and a decent amount of it is obscured, unless you use the top-down view, or the view which follows the ball around the table. That view is typically dangerous for me to use. I prefer to have the flippers visible at all times. But that half-hidden back of the table is much more engaging, however, if you do use that follow-the-ball camera.

There are a ton of missions. I’m no pro. Just keeping the ball on the table for more than five minutes is a great round for me, let alone pulling off the shots to completely spell “Market,” or “Widow,” or “Captain,” or “Thor,” “Hawkeye,” and “Jarvis.” Whoever or whatever a Jarvis is. Spelling stuff out is the bread and butter to many pinball tables. No problems there. I’m simply thankful that Marvel kept the gimmicks to a minimum.

A few Marvel tables go nuts with their design. I’m okay with some of them pushing the boundaries of what a pinball table can do, but some go too far. I think I played one that completely flipped the table upside down and expected me to play standing on my head. Just...take it easy, Marvel, will you? 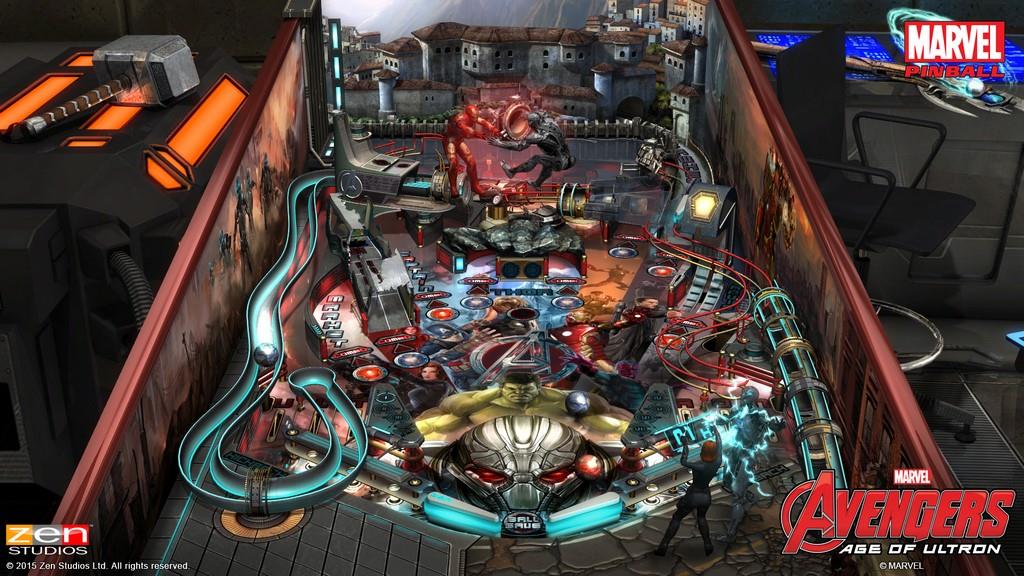 Age of Ultron, thank goodness, doesn’t do any of that. Sure, there are models of Iron Man, Black Widow, and Ultron along with some sentries doing different things along the table’s peripheral. Things are pretty tame otherwise, though. Stuff never gets too video gamey. There’s also no hidden secondary table that Zen Pinball has been fond of using in the past—where your pinball travels through some meta-portal and all of a sudden you’re playing some terrible mini-table that exists who-knows-where in the grand scheme of things.

So, good: Age of Ultron cuts out most of the over-the-top weirdness that’s been de rigeur in more recent Zen Pinball tables. Thank you, Zen Studios. It does, however, introduce two things I haven’t encountered yet in Zen Pinball, both of which I like.

One is a difficulty slider. Right off the bat, you can select easy, medium, and hard difficulty. Sounds cheap, right? But it’s simply adjusting how long you have to accomplish some of the table’s missions, plus it’s adjusting the slant of the table. The slant adjustment is kind of awesome. Hard difficulty gives the table a sharper angle, making the ball harder to move up the table, and faster on the returns. Good luck trying to tilt the ball out of the side pockets, too. As you can imagine, easy difficulty gives the table a flatter angle, giving the ball more spin and hang time, giving you a fighting chance to tilt the ball out of a bad spot, and keeping the ball rolling at a more reasonable pace.

The second thing Age of Ultron introduced to me is the option of playing a prologue. Storywise, the prologue gives you a few audio lines describing “Tony Stark’s Mistake.” (That’s Iron Man to the rest of us.) This so-called mistake is, presumably, the creation of Ultron itself. But it also kicks things off with a multiball scenario. Two balls rolling around this particular table can be tough. It’s already a fast-moving table on the front end, but it feels like two pinballs always find ways to clack into each other far too often. It’s like the Avengers themselves are constantly stepping on each others' toes. 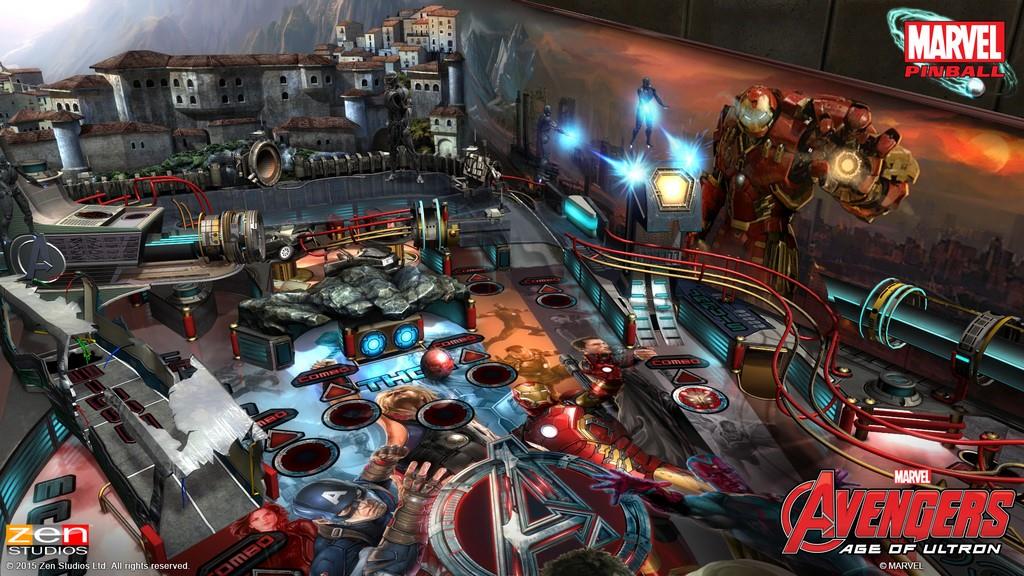 Regardless, starting the round right off with a multiball is a fun feature...that I love to skip. Which you can also do. You can skip the prologue if that’s just too much madness to start off with, and go right into a regular round of good ol’ one-ball pinball. Just how I like it.

Yet, as with most Zen Pinball tables, it blossoms with each playthrough. Since I’m no Marvel fan, just seeing Avengers painted on a table doesn’t excite me. Hearing Avengers yell out, “Skill shot!” and, “Super skill shot!” doesn’t excite me either. But again, this table grew on me. Sure, I realized that no single Zen Pinball table can fully prepare you for the next one. And I love that. It’s still stunning to see how different each table feels. But once I got into the zen (ahem) of Age of Ultron, I really started to get it.

Like how hitting the pinball a split second later off the flippers got me out of that Thor cave bullet hell. How I started knowing where to look for balls teleporting across the table and lining me up for a good skill shot. How I learned to gauge the bounce of the ball around the outer pocket so I’d know when to tilt. How it finally stopped scaring me when the ball shot down that curvy left railing at an unnatural speed.

It’s still an ugly table, but it fits the casual-destruction motif. The awkward skill shot into Avenger Tower is clunky, but I guess that’s part of what makes it a skill shot. And the dialogue is repetitive, but it at least conveys a drama of esprit de corps gone wrong, of codependence on coworkers that doesn’t pan out, and of friendships that ultimately hold it together.

Marvel’s Avengers–Age of Ultron looks like a 10-car pileup glued together with overly looping dialogue and a few forgivable missteps. Even without prior existing knowledge of these superheroes' thoughts and motivations, it’s still a challenging table with subtle rewards.