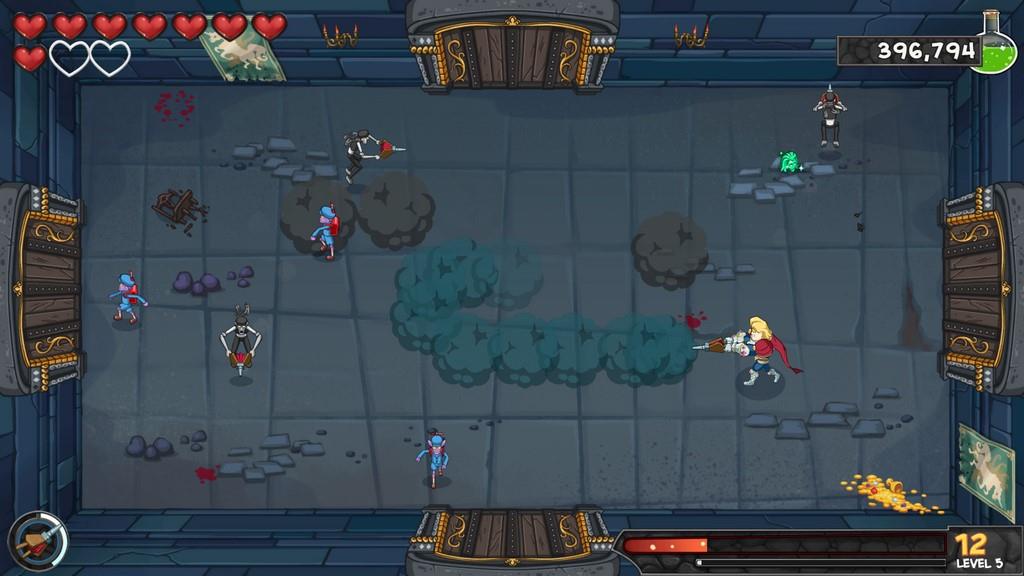 Written by Sean Colleli on 5/29/2015 for PC
More On: The Weaponographist

Roguelikes have been around forever. Seriously, in the storied pantheon of video game history, about the only games you will find that are older than Rogue are Zork, Colossal Cave Adventure and Computer Space. Rogue clones have been historically plentiful even before the explosion of indie gaming and Adobe-flash powered engines and Unity, so it’s no surprise that there’s a glut of them right now.

Puuba Games’ The Weaponographist takes the basic premise of a Roguelike—randomly generated dungeons of increasing difficulty—and distills it down into a more straightforward brawler in the style of Smash TV. You’ll still be crawling through dungeons and vanquishing monsters, but score combos and frenetic arena-based combat are a bigger focus here than simple survival against insane odds. The framework here is pretty solid but the core concept doesn’t have enough embellishment to really carry it and the production values leave something to be desired.

The story is pretty basic but tries to inject some humor into the ancient Roguelike formula. The main character is Doug McGrave, a greedy mercenary who sells his monster-killing expertise to the highest bidder, preferring to save only rich clients. He snubs a cash-strapped, demon-infested town and the local witch curses him for his capriciousness. McGrave’s expensive arsenal now crumbles in mere minutes, forcing him to constantly scrounge whatever weapons are on hand. Even worse, the curse won’t be lifted until he rids the town of its demon problem.

This factors into gameplay by adding a frantic element to the typical floor-clearing of a dungeon crawler. Each room you enter constantly spawns enemies, and you start out with only your bare hands. After slaying a few monsters you can grab their weapons and put them to use, but these fall apart after only a few uses. On paper this encourages a dynamic, flexible playstyle where you master every weapon because they only last for a few seconds anyway. In practice, however, I found it less practical. The in-game arsenal runs the gamut from simple swords, spears and bows to anachronistic fare like Tommy guns and chainsaws, but some weapons like the bow are just plain less effective than others. I’ll take a fast, straightforward weapon like a longsword over a bow any day, at least in this game. 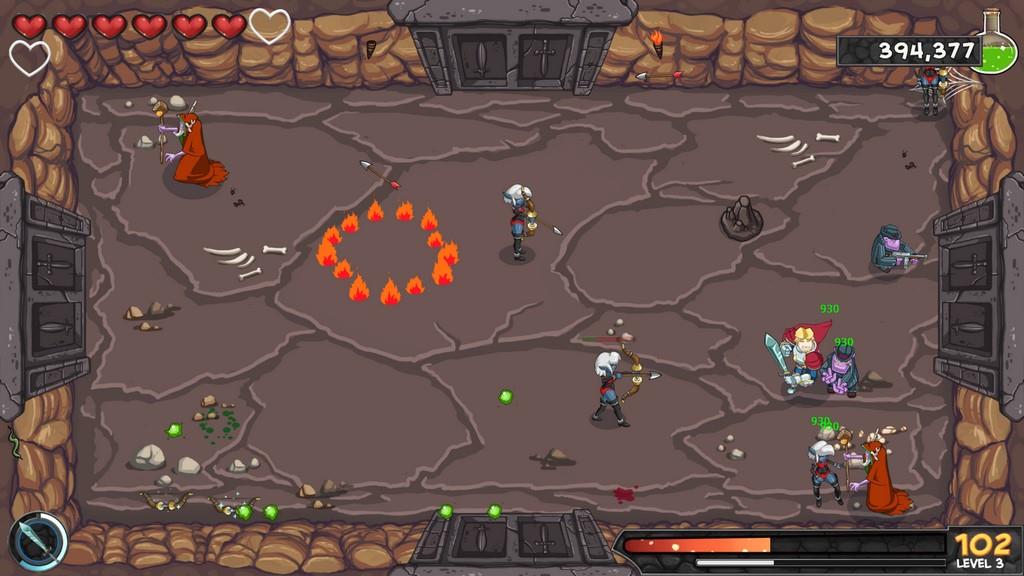 The game also rationalizes McGrave’s supposed constantly “waning strength” by including an arcade-style combo meter. By filling this gauge your attacks deal more damage, and racking up the kills will even level your attack beyond the basic meter. The only problem is that the enemy spawning rate is somewhat random and slow, so you can run out your combo fairly quickly just waiting around for enemies to spawn. It also takes dozens of kills to level your meter, so in the end it becomes almost more trouble than it’s worth to maintain that combo.

Overall you’ll probably stick with just a handful of workmanlike weapons and maintain a kill meter just high enough to make a difference in the damage you mete out. The Weaponographist is ostensibly a twin-stick brawler and I most definitely recommend you play it with a controller as opposed to the awkward keyboard controls, which map movement to WASD and attacks to the four directional keys. The weird thing is that even with a dual analog controller, attacks are mapped to the face buttons; you can only attack in the four cardinal directions, which makes combat a little clunky at the best of times. 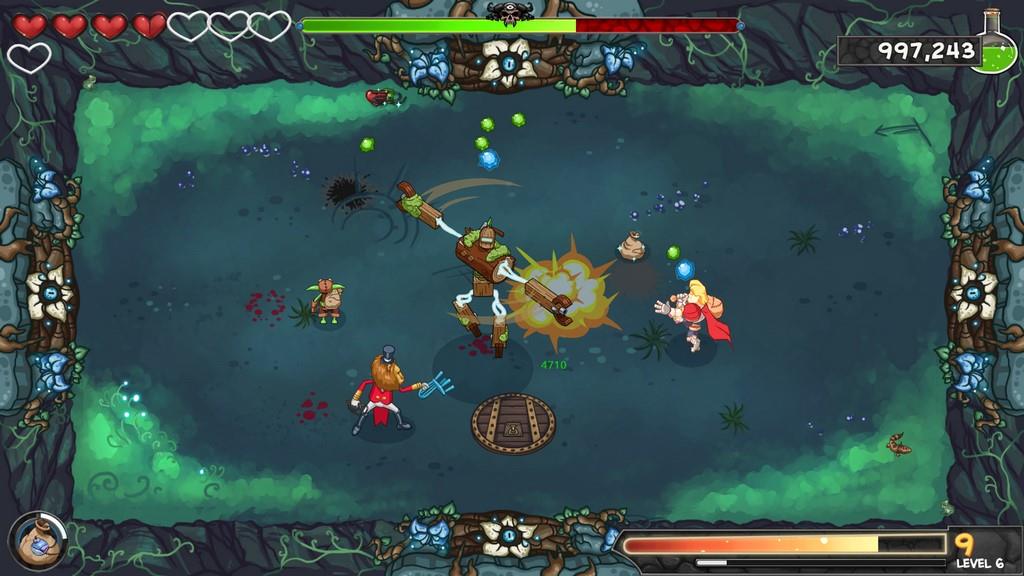 Between floors of the dungeon (or every time you die) you can exit to a hub village and chat with various shop owners for upgrades. These upgrades include damage buffs for various weapons, potions for generating special effects, and even tossing extra supply crates into the dungeon for the next round. These incidental characters have the best portrait artwork in the game and some fairly entertaining dialogue and even phonetically spelled-out accents, so here is where The Weaponographist’s complete and utter lack of voice acting is felt most sorely. Some simple but well-cast voice talent would have immensely buoyed the game’s glaring lack of personality here and given the store more impact.

This “good enough” approach is seen in most of the game’s production values. The visuals aren’t poor, per se, but they are pretty basic. There is a wide variety of enemy types but animation is fairly simplistic and reminds me of the early Flash games circa 2004. The dungeon visuals are rather flat compared to the character portraits and the whole affair has a distinct “bargain bin” feel to it. The Weaponographist isn’t a bad game, but it isn’t extraordinary either.

With so many other new-age Roguelikes cluttering up Steam these days it’s hard to recommend The Weaponographist over many of the others. Games like The Binding of Isaac are much deeper and have smoother mechanics and a substantially better story and setting. The Weaponographist has decent dungeon crawling, some tense boss fights and an ounce of character, but there just isn’t enough here to justify the $9.99 price tag. If you find The Weaponographist on sale it might be worth a look then, but for now the asking price is a bit steep.

The Weaponographist is a decent mix of Roguelike and arena brawler, but the controls are a bit stiff and there just isn’t enough content or personality to put the game above its similarly-priced competitors.