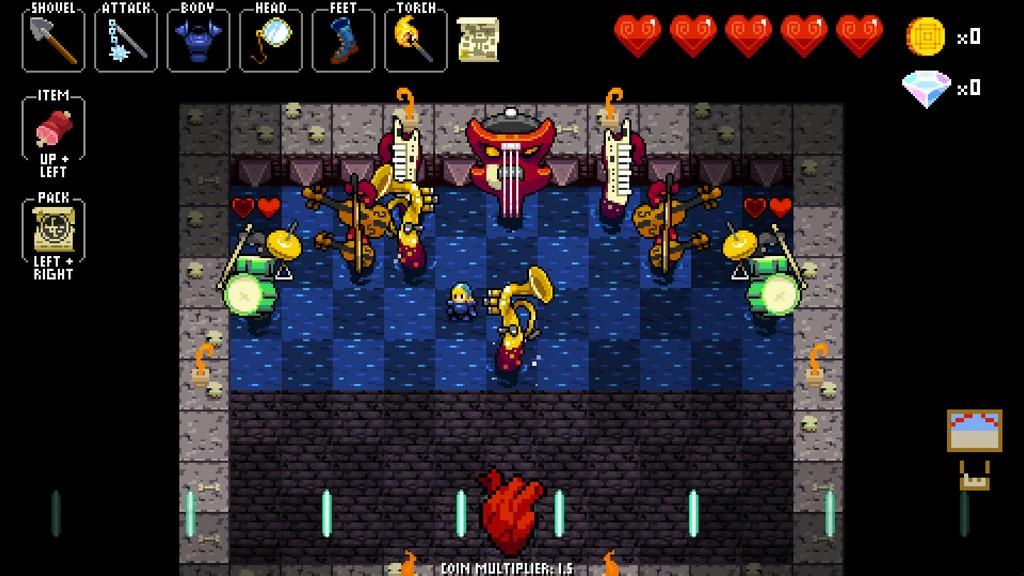 Crypt of the NecroDancer

Written by Russell Archey on 5/18/2015 for PC
More On: Crypt of the NecroDancer

When you think of rhythm games, what’s the first thing that pops into your mind?  Probably games such as Dance Dance Revolution, Rock Band, Elite Beat Agents, and so on if I had to take a guess.  Essentially games that have you hitting buttons or tapping a screen in rhythm to whatever song is playing at the moment.  What would happen if you combined rhythm games with another genre, say dungeon crawling?  Sounds strange, right?  I wouldn’t blame you, except that’s pretty much what Crypt of the Necrodancer is.

The goal of Crypt of the Necrodancer is to traverse several zones with three areas in each while finding and collecting various items and treasures.  However, this is a rhythm game so your movements are made to the beat of the music.  When you start up the game for the first time you’ll go through some calibration similar to Rock Band and Guitar Hero, then you’ll go through a small tutorial level to understand how the game works.  You’ll be moving in time to the beat and enemies will move along with you.  To clear a stage you have to either find the stars and unlock them by defeating the enemies in that section of the level, or just survive until the current song ends, after which you automatically move to the next level.  The game also has a Dance Pad mode which lets you use a USB-compatible dance pad, but it’s basically just an “easy mode” so to speak as you can still just use the keyboard…but I still love the concept of a Dungeon Dungeon Revolution.

The game has four zones with three areas in each, with a boss battle at the end of each that is somewhat random (you don’t know which of the four bosses you’ll get).  As you explore each level you’ll find weapons to equip yourself with as well as coins and diamonds to purchase items to use in your current run as well as to buy upgrades.  Since you’re moving in time to music you’ll have to adapt to how the enemies move as well.  Some enemies will move every beat, some every other beat, and some even fewer than that.  It’s also not enough that they move on various beats, but in various patterns as well.  Early on you’ll encounter blobs that will bounce back and forth between two squares, while later levels will have skeletons that move every other beat, but once you learn how the enemies behave you have half of the game down.  The rest is all about moving to the beat in a way that you can get in and deal damage to them.

You start the game with a shovel you can use to dig various types of blocks to find new areas to explore and a simple dagger that will hit the square in front of you, but by opening chests and going to shops you can find better weapons such as a spear that will hit two squares ahead and whips that hit one square in front of you but has a three square range, hitting the square in front of you and both squares beside it.   When you pick up a new weapon you’ll drop the current weapon in the same square you picked up the new one, so in case you decided that the weapon you just got isn’t really better than what you had, you can always go back and pick it up provided you’re still on the same floor.  You can also find spells and bombs to help you out and these items bring up one of the little nuances for me in the game: the controls.  My first time playing this I tried to use an Xbox 360 controller and while you can, it’s highly not recommended.  To use any consumable item you have to hit two directional inputs at the same time, one of which is Up + Down.  Try doing that on a control pad. 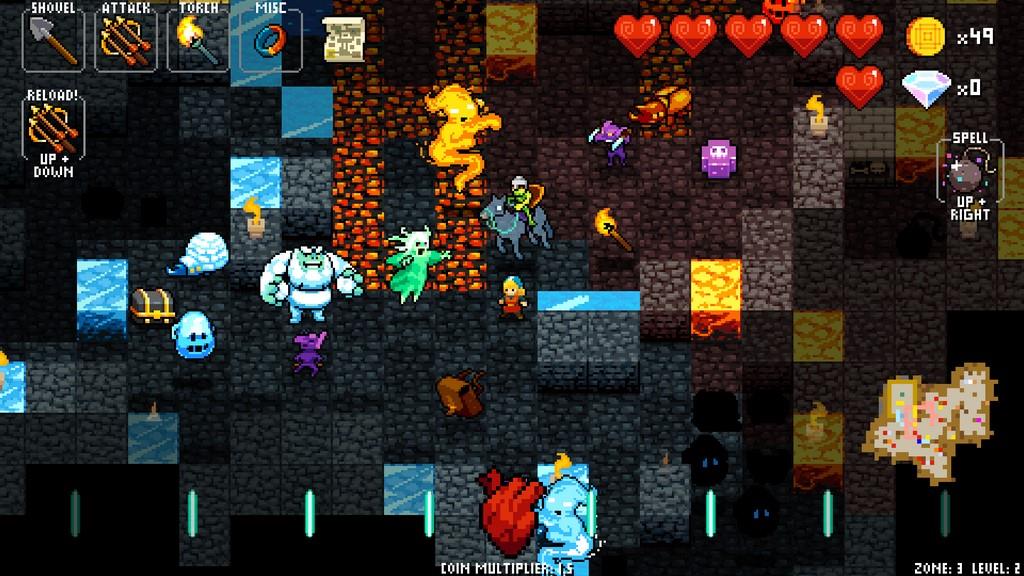 You begin playing as a girl named Cadence and can unlock several other characters as you complete the game such as Eli who can hold an infinite number of bombs and kick them at enemies or the bard, who resembles a particular YouTuber known for his “…With Lyrics” videos who can move off-beat.  The typical way to unlock a character is to beat the game with a character.  For instance, beating the game with Cadence will unlock a new character, beating the game with that character unlocks another, and so on.  There are also different challenges you can go through such as a special dungeon that changes daily but you can only attempt once per day as well as trying to complete all four zones without dying once.  Oh yeah, dying.  Think I should cover that for a moment.

If you remember a while back when I did a review for Vertical Drop Heroes, I mentioned that when you die you go back to a central area where you can spend gold on upgrades to help you progress further and further into the game.  Necrodancer works the very similar.  When you die you’ll go back to a central area where you can pick your zone to start in, change your character, do one of the aforementioned challenges, or purchase upgrades.  However, when you die you lose all of your items, weapons, upgrades and gold you had on you, but not your diamonds.  This central area is where you can spend your diamonds in one of three shops.  Two of them allow you to purchase something to make it randomly show up in chests during a level while one allows you to purchase a permanent upgrade such as extra heart containers or having rarer black chests show up once per run guaranteed.  The catch though is that once you get back to the game you’ll lose any diamonds you had, so it’s use them or lose them. 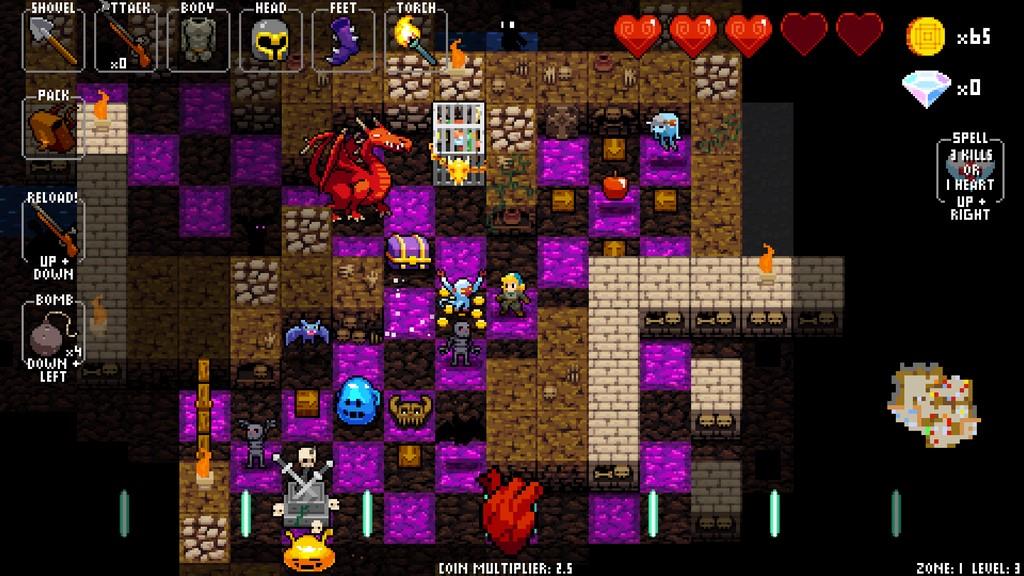 One of the best parts about the game is the soundtrack.  Since you’re moving in time to the beat it makes since to have a great soundtrack to move to.  What’s also cool is that if you’re familiar with a YouTuber by the name of FamilyJules7x, he actually had some involvement with the game (for those who don’t know, FamilyJules7x does some really great covers of video game music).  However, if you’re inkling for something a little more…you, the game actually allows you to use your own music.  You can set custom music to any of the game’s levels as well as each boss battle by importing .mp3 or .ogg files and the game will automatically detect the beats for you.  I customized each zone to have a specific theme, so I had the first zone be all Mega Man fortress stage music while zone two was all Ducktales which made for an interesting experience with the Transylvania theme, but it’s a nice challenge to have faster music to move to.

Outside of the aforementioned nuance with the controls and using items, the only other thing that kind of bothered me is with the custom music and the meter at the bottom of the screen.  When the lines on the meter hit the center and you see the heart beat, that’s when you’re supposed to move, but with a couple of my custom songs I’ve noticed that the beat doesn’t quite come when the lines hit the center, yet oddly the game doesn’t mind.  The only downsides to not moving to the beat are the enemies will still move to the beat and can easily swarm you and your coin multiplier will reset to 0, giving you less coins on pickup.

Beyond that, I had a lot of fun with Crypt of the Necrodancer and it’s easily one of the best games I’ve reviewed on Steam in quite some time.  The music is awesome whether it’s the games’ or your own, the controls are fluid for the most part, and it can be pretty challenging at times trying to manage multiple enemies who all move differently and on different beats.  The multiple unlockable characters gives quite a bit of replay value and if you’re like me and die easily in the early going, the upgrades you can buy between deaths will help ensure you eventually see those later levels.  If you’re into rhythm games, this is one you probably wouldn’t want to pass up.

Crypt of the Necrodancer is an awesome rhythm game you don’t want to pass up if you’re into the genre.  It solidly blends dungeon crawling with moving in time to the rhythm and the soundtrack is great.  Putting in your own soundtrack is a huge plus for me as well as I have a lot of classic NES music I can use to match the retro-style look of the game.  If you like rhythm games, definitely pick this one up.