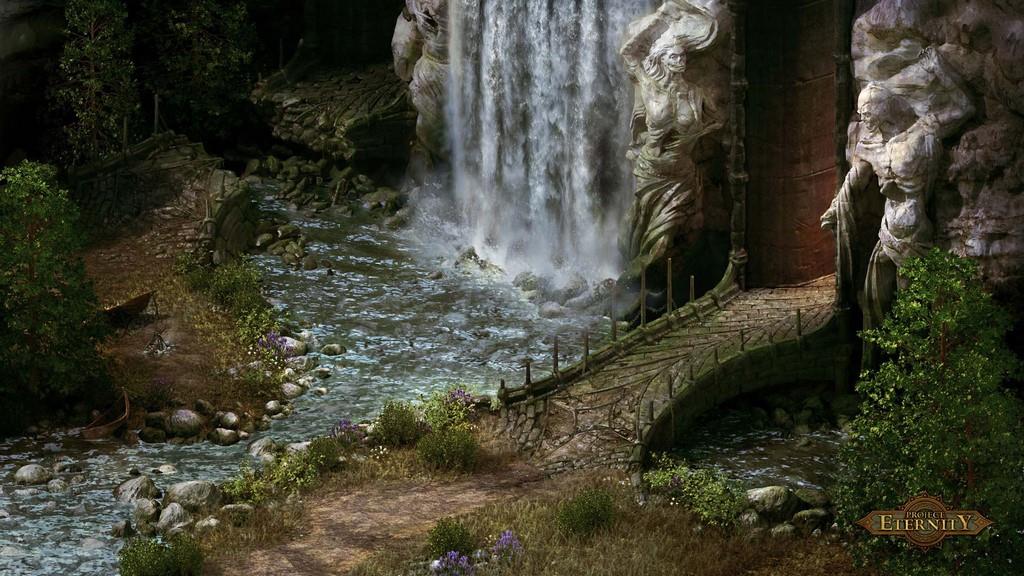 You've probably heard this, but a bit of background: Pillars of Eternity started as a Kickstarter campaign. Unlike many Kickstarter campaigns, the folks behind it, Obsidian Entertainment, aren't running the development out of their garage. They are an experienced studio with titles like Fallout: New Vegas and South Park: the Stick of Truth to their credit. In an interview with Ars Technica, one of the designers, Josh Sawyer, revealed that Kickstarter wasn't shier first choice but it was "almost impossible to get funding through traditional methods for a game like this." However going the Kickstarter route frees the game form the shackles a traditional published might impose. As the article states: "Being free of publisher constraints and things like the ESRB ratings system will also allow the game to delve into more mature subject matter that fantasy worlds normally ignore, Sawyer said. Things like 'slavery, hostile prejudice (racial, cultural, spiritual, sexual), drug use and trade, and so on' will all help flesh out the story and add a believable core to the highly fictional world, he said."

The end result: Pillars of Eternity is a very adult game that just nails the cRPG niche they were aiming for. But at the same time this game very much feels like it was made for the fans of that niche, and struggles to reach beyond those borders. This feels like a game where the devs truly made the game they wanted, but failed to really take into consideration a way to introduce new recruits to their world.

Pillars of Eternity is a cRPG. It's the Computer Role Playing Game counterpart to the traditional D&D pen and paper RPG. The genre was flush with titles in the 90's with games like Bladur's Gate, Shadowrun, the original Fallout. It starts as is the standard. You're a stranger in a strange land, but unlike a Japanese RPG, you don't begin the campaign as some bratty emo kid with a stupid haircut and ill-fitting clothes. (Personal aside: I just loathe what happened to JRPGs starting with Final Fantasy X). This isn't a tale of personal exploration and growing into adulthood. You are an adult, a fully fleshed and mature character in a brutal world that will be dealing with the complex and at times brutal backstories and choices in a hostile world full of thieves, murderers, and worse. I was only a few hours into the game and already coming across tales of brutal murder, an insane mother rearing her child into a monster, war-time rape, the physical abuse of a child, and more.

But first, we choose a character. There are a ton of options here and these choices are what can create all sorts of interesting playthroughs as you aren't pigeonholed into any predetermined class. Pick a race: human, elf, dwarf, or Na'vi oops, I mean Aumaua, which is like a stupider looking Na'vi. I guess that Kickstarter campaign didn't hit the backer goal to get the full rights to Avatar. Then choose sex and dive into what is actually the most audio/visually worst experience of the game. Don't get me wrong, the game is gorgeous. It's an isometric RPG so really you're just running around map paintings that you rarely interact with in any meaningful way. However, those paintings are detailed and gorgeous. The music is excellent and sets the tone. Spell effects are dazzling. The voice acting is robust and well performed. There is still a lot to read as even the interactions that are dominated by voice acted pieces still have plenty of panels of raw text to consume in between ones that are spoken. And even the few places where a nice cutscene could have been animated, a pleasantly nostalgic story chapter plays out across the screen. It's a nice throwback to the games of old and entertains satisfyingly. But, there is that darned appearance editor, which looks like it was lifted as a straight port from an iOS game. The game is gorgeous, but the appearance editor sticks out like a blackhead on a supermodel. But at the end of the day, outside of the character creation screen, your hero is just a 2 inch blip on a expansive map and those terrabad sprites that make up his get up are pretty much lost outside the appearance editor. It's much like how you can take a walk down a beach and everyone looks great from a distance of 100 yards. 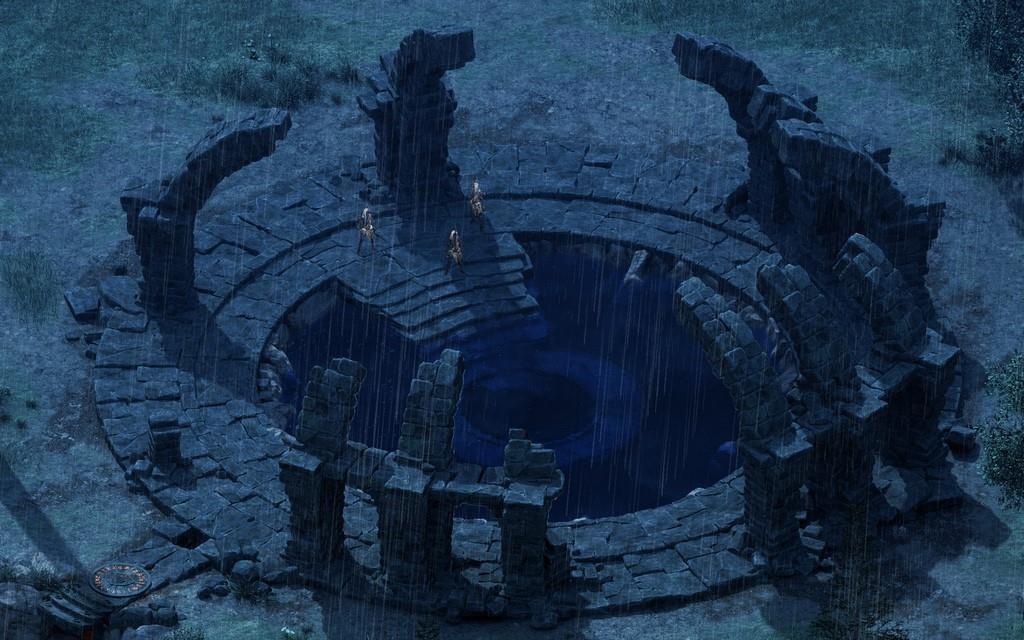 Moving on, pick a class and sort out your special abilities. The game won't punish you for your choices here. It will punish you later in many ways, but the mechanics of the party system and gaining experience points are intentionally geared towards allowing any class to succeed. You can carry a party of up to 5 characters, adding more members to your team by hiring mercenaries from taverns or meeting more leveled up parters on the road. A well balanced team is easy to assemble no matter how you design your hero. But even more to the effect to allow any character to succeed, is that you gain experience points by achieving goals and exploring places, not by defeating enemies. No leveling up by defeating a million low-level spiders in this one. If faced with an enemy at one end of a room and a set of stairs at the other, surviving a brutal encounter with that enemy will not budge your level one bit, but climb those stairs and hoo boy! 40 XP, cha-ching! The end result though, is the warrior who slays the beast and climbs the stairs ends in the same state as the thief who slinks by the encounter. It doesn't reward one play style over the other.

You got your character, you jump into the game. You get a few companions and breeze through the first bit of the world and dungeon. The plot takes effect and you discover you're a watcher, one who can interact with the souls of the dead as if they stood before you. You're cruising along and as long as you stick to the main road and don't venture off the beaten path you're blazing through the world. And then you hit the wall. Because at some point you're going to discover that you've come up upon an enemy encounter and they are tearing you to shreds, destroying your whole party with ease on every re-load of the last save. You've gotten into the lore, you've seen the trappings of a beautiful world, but what you've never been given in any real tutorial on how to actually play the game, use your party members and especially their special abilities, organize formations and spacing, etc. This is where I feel the game failed to open itself to a larger audience. If you know how to play cRPGs, then you're much better off. But for the un-initiated, there isn't so much of a learning curve in this game as it is a learning cliff. 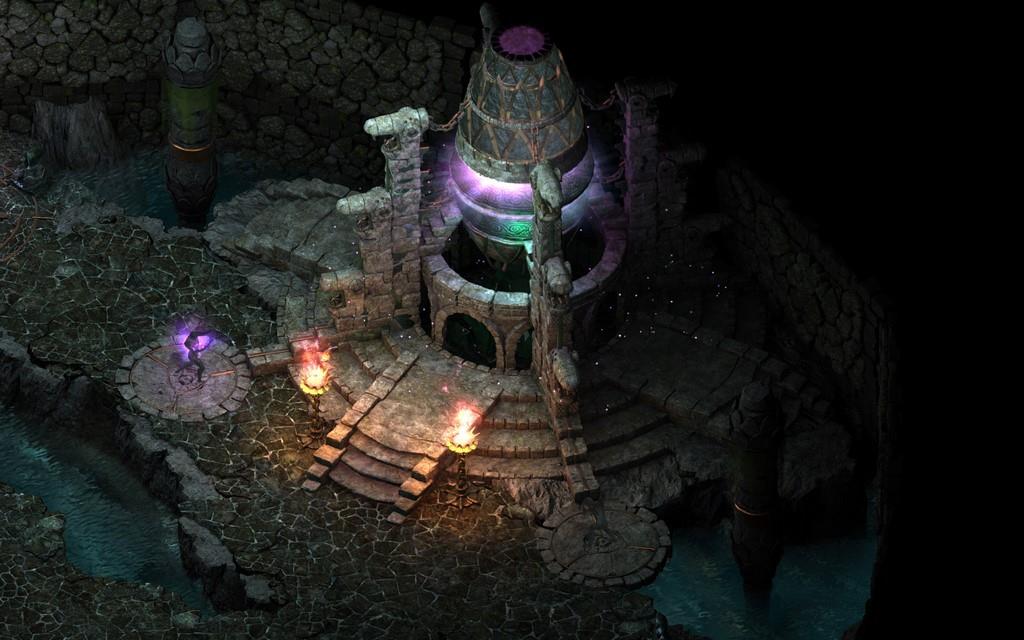 This is also why the difficulty of this game has split opinion pretty sharply. Many feel the game is way too hard while there is a another faction that feels it is actually too easy. I think it just doesn't teach you how to play it very well, and that's what makes it difficult. You meed a new character, and they are a wizard or a chanter and unless you know how chanting or grimoire's work, its a bit daunting to really get all the ins and outs until you start getting slaughtered and have to take a long step back to explore the nooks and crannies of all your party's strengths and specials. And that's not even starting on the detailed attack strategies matching weapons and spells that can do crush, pierce, or slash damage against defenses of deflection, fortitude, reflex, and will; or the fact that all this plays out in real time with a space bar to pause progress. There is so much going on at all times in an enemy encounter of any real importance that you might just wear your space bar out. This game really feels like a turn based combat system that got misplaced into real time.

All that could be mitigated by companion AI that was smarter than rocks, but sadly that is also often missing. So you've got a plethora of offensive and defensive options and special abilities with up to 5 characters that need to be properly spaced into rank and file, as you manage health and endurance, all in real time, and then your companions get dumbfounded when their target teleports 2 paces to the side and they sit and wait for death's cold embrace as the rest of the party is slain. Combat requires intricate micro-mangement and there aren't a lot of shortcuts around this because of the deficient companion AI. 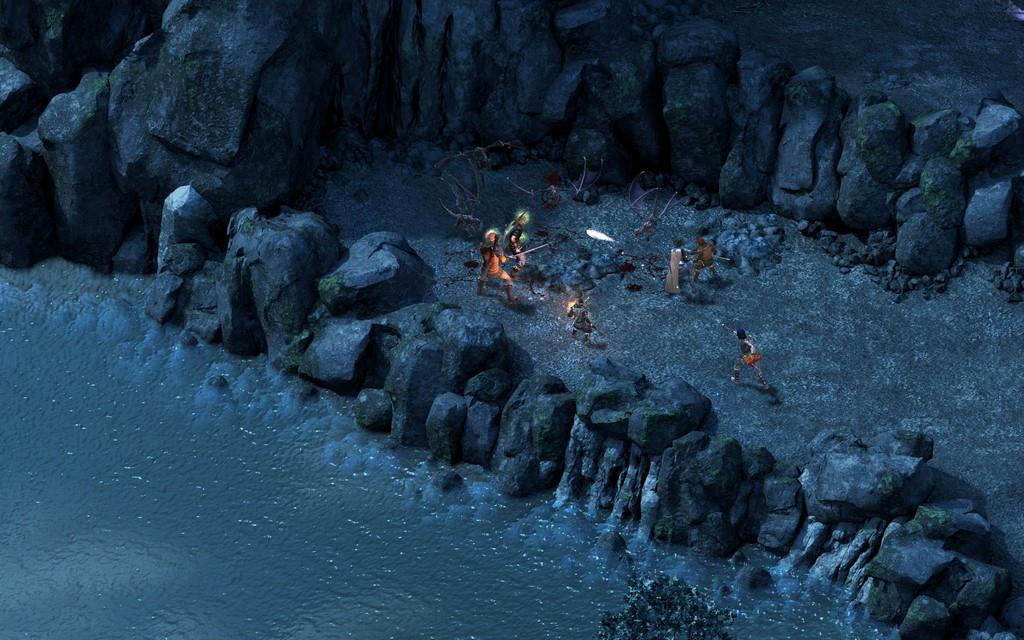 The game never teaches you how to play it, you just play it, and have to teach yourself. And I don't find that a good thing. In the end, once you've slogged through the school of hard knocks and have the knowhow, then there is this incredible experience at hand. But there are better ways to arrive at this point than having to suffer the crucible of trial and error, especially when even on easier difficulties the game punishes you mercilessly for mistakes. It's the double threat of you're not going to be taught how to play, a difficult and complex system in real time and when you mess up your characters suffer perma-death. A character who loses all HP gets knocked to the floor, but if they take another hit, then I hope you have something less racey for their headstone than some, ahem, others in the realm of the Eastern Reach.

At the end of the day, this is a great game. It does have some minor bugs but patches be patching and I wouldn't sweat them. Its a gorgeous experience and once you self-teach yourself how to actually play it, there is a very mature tale at hand that really does explore those spaces the developers were promising. There is also a ton of game here to be had. I put in 27 hours according to my Steam account and barely scratched the surface. There's probably 60+ of core gameplay with enough class variety for rewarding replay as well. But it is also a game that will not hold your hand and lead you into it's world. If you want it, you'll have to figure it out for yourself, and hopefully that first taste before hitting the wall will make you want it.

This is the type of game that needs two scores. One for the diehards of the genre and one for the newbies. The development team catered to their core group, and I feel they made the game that they wanted to play. But ultimately I also feel I have to hold them responsible for making a game that feels inaccessible in so many ways. Once you get over the learning cliff, there is a better game out there than this score represents. Pillars of Eternity is like a speakeasy. If you know the dirty, dark alley you need to go down and have the password for the doorman, there is a wonderful, vibrant, and robust world on the other side filled with dancing girls, jazz music, booze, and cigarettes.