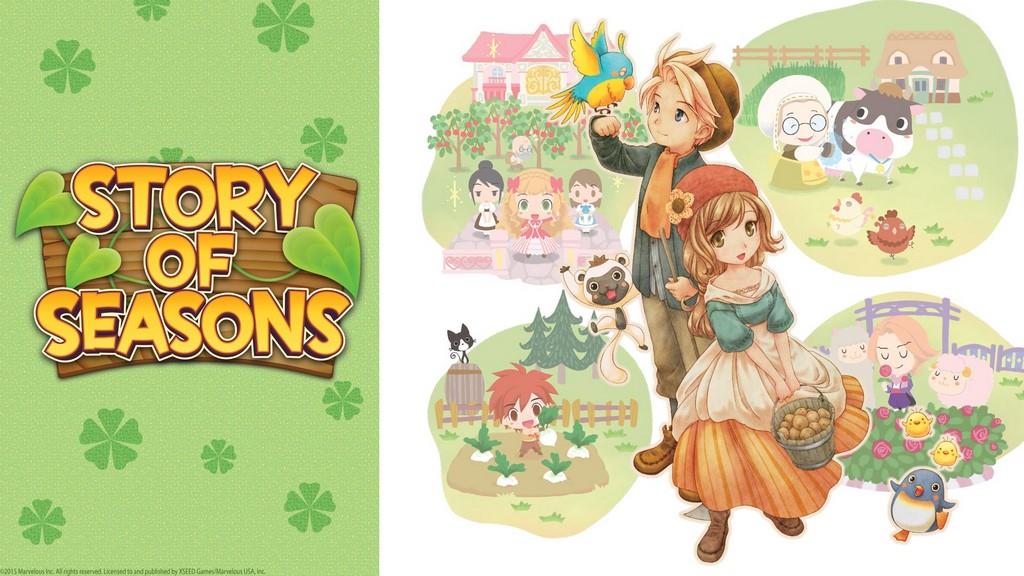 The Harvest Moon series has one of gaming’s most obscure and intriguing histories. It began life as a novel concept that nobody believed would work—an RPG that eschewed combat and magic for farming and friendships. After being nearly cancelled multiple times, the original Super Nintendo game was finished by a ragged development team that dwindled down to just three members. Miraculously they completed the game for an August 1996 release in Japan, but it didn’t reach America until nearly a year later in June 1997—incidentally, almost a full year after the N64 came out. Although definitely a niche title, Harvest Moon has gone on to be one of gaming’s most charming cult successes.

The drama surrounding the latest entry in the series has been no less interesting than the desperate development and release of the first game. You see, Harvest Moon is developed and released in Japan by Marvelous Entertainment, under the title Bokujō Monogatari, which roughly translates to “Farm Story.” For much of its history the game series has been localized and published in America by Natsume, under the title Harvest Moon. In the past year Marvelous and Natsume have parted ways, with both companies deciding to develop their own farming simulators. The catch is that Natsume retains the Harvest Moon trademark; this means that their latest game gets to keep the same title as Harvest Moon: The Lost Valley. Marvelous on the other hand must choose a new name for their game, at least here in the West. And so, the long-running Harvest Moon series developed by Marvelous begins anew with Story of Seasons.

The only thing you need to know about Story of Seasons is that it’s Harvest Moon through and through. In fact it might be even more “Harvest Moon” than the actual Harvest Moon game developed by Natsume—The Lost Valley. While Natsume’s game takes a very Minecraft-style approach to farming and terrain deformation—and the reception to that has been mixed at best—Story of Seasons is almost too traditional. Marvelous clearly wanted to reboot the series with a back-to-basics game that didn’t take too many risks with crazy ideas. This produced, for lack of a better term, a very pure Harvest Moon experience. It feels distilled, focused and fresh, but it adds one or two new ideas that really bring something new to the longstanding formula.

Story of Seasons doesn’t have one huge driving gimmick like some of the previous Harvest Moon games. The game doesn’t contain dungeon crawling or monster training like Rune Factory. You don’t build an adorable land monopoly empire like you could in Harvest Moon Magical Melody, although you can jockey for select land rights with a few rival farmers. The game doesn’t chronicle your farmer’s entire lifespan like Harvest Moon A Wonderful Life did, and sadly you can’t play the second half of the game as your son or daughter like in Rune Factory 2. 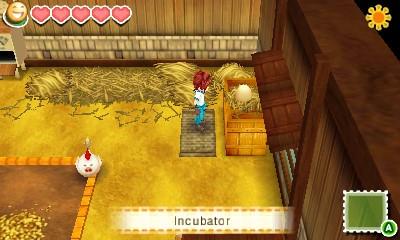 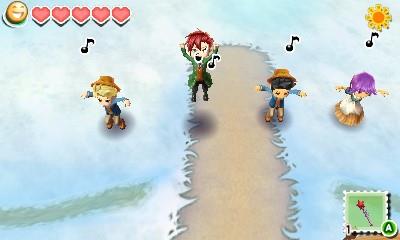 That said, this back to roots take on Marvelous’ farming sim does sprinkle in some fresh concepts. They let you play as a boy or a girl from the outset, thankfully avoiding their preponderance for two-version double dipping that we’ve seen before. There is also some light character customization, allowing you to pick your expression, skin tone, hair color, clothing and eventually craft new clothes to change your style.

The story is also a slight break from tradition. Instead of inheriting a dilapidated farm from your dearly departed grandparents, your city-slicker character longs for the simple Green Acres clean living of the country, enters a contest to get a farm and some land, and ends up winning. You spend your first week in the country doing chores and learning on the ranch of a kindly old woman named Eda, who happens to be a veteran farmer. This mandatory tutorial week is pretty basic and can be an annoyance for longtime Harvest Moon gamers, but it does familiarize new players with the streamlined interface and mechanics. It also introduces you to Eda’s good-natured but goofy grandson Fritz, who is your first farming rival and if you’re playing as a girl, your first eligible bachelor and future husband if you so choose.

The basic farming mechanics have been simplified a bit. Even your simple tools can work a 3x3 plot of land with one swing, which makes things go much faster starting out. Taking care of animals plays about the same. You still have to either grow or purchase animal feed in bulk to keep your herds and flocks well fed, and many animals will be much happier if you brush them and talk to them daily. One new concept that might annoy veteran farmers (but make progression easier for new players) is that new animals are unlocked as your progress through the game, including individual breeds that make different “flavors” of product. Of course, this has to do with the game’s biggest new feature: vendors. 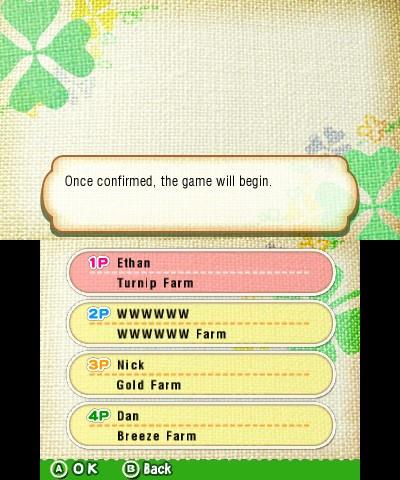 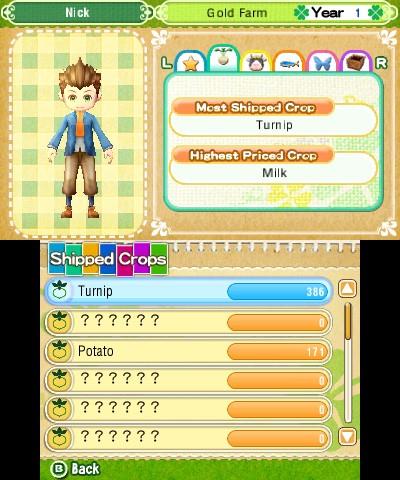 In previous Harvest Moon games, all you had to do to sell the hard-won produce of your farm was dump it in the shipping bin next to your mailbox. A shipper would pick it up at the end of every day and pay you the standard rate in gold, but I always wondered how the shipper determined what to pay you, and how he distributed all of the various goods to the people who needed them. The market has to be more complex than that, right? Well, it seems Marvelous was pondering the same thing, because in Story of Seasons you ship and sell your goods on your own.

While basic shops around town will have all the standard supplies you need to get started, to make real cash and gain the most valuable goods you need to visit the trade depot in the town square. Every day vendors will visit from other countries to trade exotic goods. Different merchants will come on different days of the week, and their demand for certain goods will change with the seasons and what the populous in their country needs. To stay on top of demand it’s important to keep a close eye on the trade schedule and which goods are in high demand; buy low, sell high. This is also how you get rare breeds of animals, new clothing materials and even blueprints for essential structures like the chicken coop.

This international market idea adds a whole new dynamic to the old formula. If makes your little community feel like an integral part in a big economy, fostering cooperation and attentive play instead of just going through the motions and learning basic patterns. Instead of just growing the most efficient, but boring, crop year after year, you’ll be encouraged to try out bizarre new vegetables, breed new animals and build a cheese factory, a tailor’s studio and every last addition to your farm until it’s a veritable self-sustaining country store unto itself. I got hooked on the comparatively simple illegal drug trade in Grand Theft Auto: Chinatown Wars, so the sprawling world market in Story of Seasons ate up an embarrassing amount of my time. 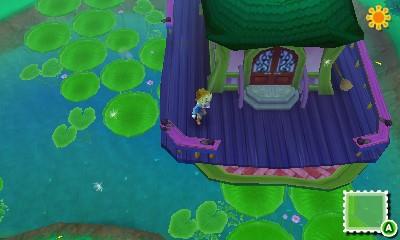 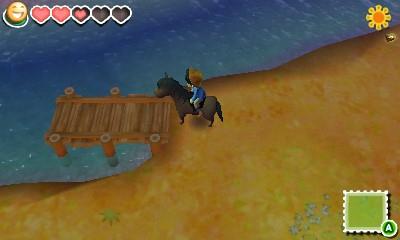 Of course all work and no play makes Jack a dull farmer, so Story of Seasons includes the staple social element that makes the Harvest Moon series so special. As always making friends is just as important as making profits, especially in the case of marriage and raising a family. Story of Seasons retains the light dating sim aspect that is expected of the Harvest Moon series, and it’s more or less unchanged here. You can woo any of six potential bachelors or bachelorettes depending on the gender you choose for your character, increasing their heart level and experiencing special events along the way that determine your prospective mate’s opinion of you.

I have no problem with the dating system being the same, I guess I just didn’t find any of the romance options as funny or as interesting as the characters in previous Harvest Moon or Rune Factory games. Once you’re hitched you can have children too, and how soon that happens depends, amusingly, on the extravagance of the wedding you arranged for your husband or wife-to-be. It’s just another example of the winking, innocent sense of humor Marvelous puts into their games. When you do have kids you’ll always get twins—a boy and a girl—but unfortunately they never grow much farther than the toddler stage.

The rest of the game has all of the hallmarks that Harvest Moon fans have come to love and depend on. There’s fishing, mining, cooking, seasonal festivals, and an extensive crafting system that lets you customize your farm and the town with decorations. There’s even a safari where you can collect bugs and wild animals. Story of Seasons might not be as ludicrously deep as Harvest Moon: Friends of Mineral Town on the GBA, but it’s definitely one of the meatiest farm sims in recent memory.

The whole package is wrapped in the adorable art style and other production values fans expect from Marvelous. The character designs are typical anime with some pretty extravagant art for a few of them, but the conversation portraits are sparsely animated. The town is colorful and vibrant, but throwing on the 3D effect sadly slows the framerate at times. On the audio side there’s plenty of relaxing acoustic country music to put you in the farming mood, or soothe away those aches after a hard day in the fields.

Story of Seasons doesn’t try to reinvent the watering can, at least not on its first try. Instead it takes everything Marvelous has learned in nearly two decades of making Harvest Moon, and plants a fresh start with the best of those learned lessons. I can see Story of Seasons branching out and trying some of the crazier things its predecessor series experimented with, but for now it’s just a very solid parallel take on Harvest Moon, a great place for newcomers to start, and a wonderful opportunity for lapsed fans to roll up their sleeves and get their hands dirty again.

Story of Seasons doesn't rewrite the book on farming sims, but it's a big, healthy break from the Harvest Moon series that adds a few strong new ideas. It's Harvest Moon in everything but name, and one of the best of this kind of game to come along in a while.