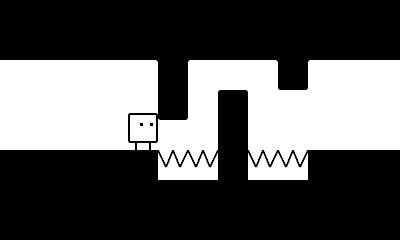 One thing I’ve always like about puzzle games, especially those on portable systems, is that they’re great for playing in short spurts.  A lot of puzzle games are split into multiple stages, such as Mario vs. Donkey Kong and Dr. Mario, and it’s easy to knock out a couple of levels when you have a few minutes of downtime.  BoxBoy is no exception to that, but is probably one of the more simple puzzle games I’ve played.  What exactly do I mean?  Let’s take a look and find out.

You play as Qbby and your goal is to reach the end of each stage with multiple stages in each world.  This is accomplished by creating boxes to get past various obstacles like pits and spikes.  It sounds incredibly simple…and it is.  While holding the Y button you use the D-pad to make boxes appear up to a certain amount, showing on the bottom screen.  From there you can drop them, throw them a certain distance, or even jump up and hook onto a ledge and pull yourself up.  As you progress to later worlds you’ll come across different types of obstacles such as switches and lasers that you’ll have to handle, though the first level of each world gives you a hint as to how to handle the new situations.

As you play you’ll notice a couple of things on the bottom screen: “box limit” and “remaining”.  Box limit is the number of boxes you can place at one time.  For instance, if the box limit is 5, that means you can place anywhere from one to five boxes at a time.  The number next to Remaining also has one or two crowns below it.  When you clear a stage you’ll gain some medals that you can spend in the shop.  There are one to two crowns in each stage that’ll earn you more medals when you finish the stage, but that’s where the number next to Remaining comes into play.  You only have that many boxes left to use until the crowns disappear for the rest of the stage.  For instance, Stage 4-1 has a box limit of 4 but you can only use 24 boxes in total before the crown disappears.

Going to the shop allows you to purchase costumes, pieces of music to listen to, books of hints for various obstacles and strategies, and challenge stages.  There are two types of challenge stages: score attack and time attack and they’re both pretty self-explanatory.  Each one is a race against the clock to beat a target time or score and the game saves your best time or score on each stage.  At first you’ll only have a small amount of items to purchase, but after every couple of stages you’ll come across a chest you can open to unlock more items to purchase.

So that’s essentially all there is to it.  This is probably one of the simplest modern puzzle games I’ve played in a long time and that’s both a bad thing and a good thing.  The good part is that as I stated in the intro, these types of puzzle games are great in short spurts when you don’t have much time.  Each stage doesn’t take that long so if you have a few minutes, simply pull out your 3DS, get through a couple of stages, and there you go.  The bad of it is that this is also one of the easiest puzzle games I’ve ever played. 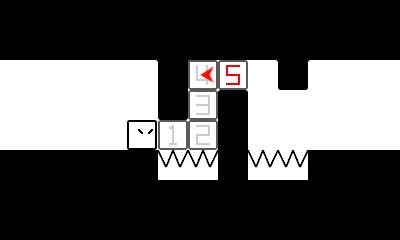 There are over 20 worlds to guide Qbby through and each world has five to seven stages in it.  That being said, this game only took me a few hours to get through which doesn’t seem too bad, but I’d say at least 90% of the stages posed very little of a challenge.  If I’m playing a puzzle game where there are also items to collect (such as the Mario vs. Donkey Kong series), I’ll make an effort to try and collect everything before finishing the stage.  I know I may not have to, but it’s also a good measure of the game’s difficulty.  That being said, BoxBoy is pretty easy for the most part and I was able to grab most of the crowns with very few problems, a lot of the time with plenty of boxes left to spare.  On top of that, after every obstacle/pit/situation that requires the use of boxes that you clear you essentially hit a checkpoint.

The checkpoints make things even easier.  If you’re stuck on a segment and have used up so many boxes on that segment that you can no longer gather any remaining crowns in the stage, hitting L and R together takes you back to the last checkpoint and puts your remaining boxes back at what it was when you first hit the checkpoint.  You can also use the 3DS’s Play Coins to give you a hint on how to clear the current segment.  In other words, this game seems to do whatever it can to hold your hand throughout the game.  That’s not to say the game isn’t fun; it just doesn’t feel all that challenging.  It wasn’t until towards the end of the game where I ended up using quite a few play coins to figure out how to clear some segments so I could get through them, but a lot of them I had the general idea on how to clear them, it was just trying to figure out how to get the particular arrangement of blocks that I wanted.

In the end, BoxBoy is a fun game and can be challenging for younger gamers.  A lot of the puzzles do take some creative thinking and box arranging to get through and collect the crowns for that stage.  For older gamers though, the game might feel too easy and won’t pose any challenge at all outside of maybe the Score and Time Attack stages as well as the last couple of worlds in the main story.  If you’re up for some creative puzzle solving, you’ll likely want to give BoxBoy a try.  However, if you’re not fond of puzzle games that seem too easy to solve, this one might turn you away.

BoxBoy is a fun game with some pretty creative puzzles.  However, the easier difficulty might turn off some more experienced players as there isn’t too much of a challenge until much later in the game.  While a good game, it would have been nice to see some more complex puzzles around the mid-way point to up the challenge a bit more.