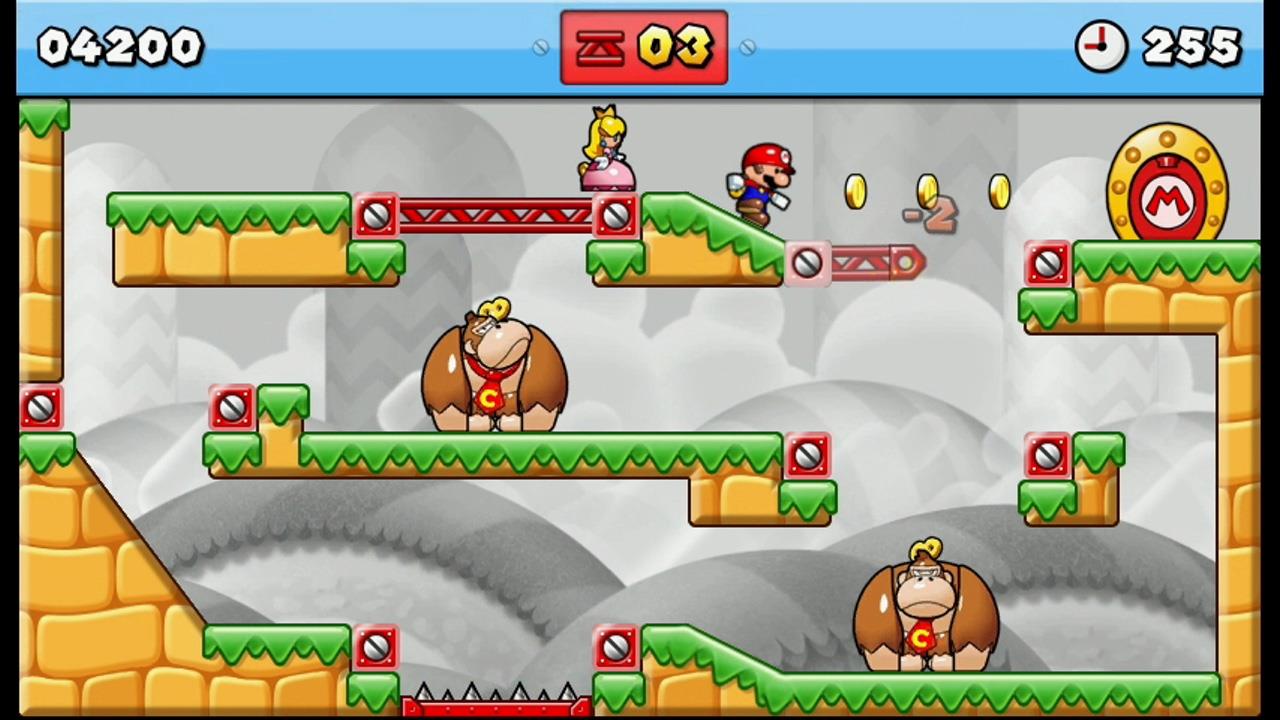 Written by Russell Archey on 4/29/2015 for WiiU
More On: Mario vs. Donkey Kong: Tipping Stars

Ever since Mario vs. Donkey Kong was released for the Game Boy Advance in May of 2004, the series has seen several releases on the DS and 3DS with just about each one bringing something different to the series.  For instance, Mario vs. Donkey Kong 2 introduced using the DS’s touch screen to activate mini-Marios and help guide them to the stage’s exit, Minis March Again upped the difficulty by making the minis move along a set path, meaning you couldn’t just change their direction on a whim, and Minis on the Move experimented with a new way to play by moving blocks into place to get the minis safely to the goal.  What will Mario vs. Donkey Kong: Tipping Stars bring to the series?  Well let’s find out as I take a look at the Wii U version, the first game in the series to hit a system that’s not a handheld (and yes, I know this also came out on the 3DS).

If you’re unfamiliar with how the Mario vs. Donkey Kong games work, the goal is to essentially get all of the minis on the stage from their starting positions to the final door(s) while collecting coins along the way.  While collecting coins isn’t required to finish the stage, they do earn you points and the more points you get, the better trophy and more stars you get with a bronze trophy netting you one star, a silver trophy gets you two stars, and the gold trophy gets you three stars.  What are the stars for?  I’ll get to that in a bit.

Each world has eight stages which are all structured in somewhat the same way.  The first stage will typically get you acclimated to some sort of new gimmick (removable girders, conveyor belts, pipes, etc.) and the next six stages typically mix the old and new gimmicks together.  Some stages will have multiple types of minis (Mario, Peach, Toad, etc,) that you have to get in the goal, or the occasional stage where each character has their own door to lead them to.  For stages with a single door, once one mini gets in the door, you have a timer that counts down on the door to get another mini in the door or else you have to do the stage over (the timer resets once a mini gets in the door).

One of the later stages in each world will also feature a mini-Mario with a key and a locked door.  Naturally you need that mini to get to the door ahead of the others so it can unlock the door, but the challenge is that you’ll have to occasionally do some tricky object placing and removing to get that mini in position to be the first one in the door.  Finally, the last stage in each world features a mini getting taken over by a shadow.  The shadow-mini still counts as a mini but it can’t exit the stage until it is freed by taking out the shadow with a hammer.

Each stage gives you three hundred seconds to finish it, but before each stage begins you can take as much time as you like to look over the stage and even remove and place objects to get ahead of things and plan them out before you make any of the minis move, which leads to one of my problems with this game: the difficulty.  It’s natural for puzzle games (or any game for that matter) to get increasingly more difficult the further in you get.  Mario vs. Donkey Kong: Tipping Stars is no exception, but as I got further into the game I couldn’t help but feel that the game wasn’t getting much more difficult, and I feel that one reason in particular could sum this up, and it’s something I already touched on.

As stated just a moment ago, the timer doesn’t start until you touch one of the minis.  This gives you as much time as you want to figure out how a stage works, removing and placing components all you want to give you some sort of visualization as to how to get every coin and get out of the stage.  If all you’re going for is to just get out of the stage, the difficulty is kind of non-existent for the most part.  Going for everything can get a bit more tedious, but having all the time in the world to plan things out makes for a much easier time.  If it were up to me when developing the game, I would have had the timer begin ticking down as soon as you touch a component or a mini.  That way you’ll have to picture things more in your mind how you think they’ll take shape once you begin work on a puzzle and have to think quicker on your…stylus.

At this point there might be a particular question on your mind; just what does the subtitle “Tipping Stars” mean?  Every other subtitle refers to the minis: Minis March Again, Minis on the Move, and so on.  Well, it’s time to talk about what’s probably the game’s biggest feature: stage construction.  When you begin to create your own stages you have some basic things to work with, but you can unlock more by spending those stars you’ve been earning in the main game, such as new backgrounds, more minis, multi-door stages, and so on.  Thing is it’s going to take a lot of stars to unlock everything as the most expensive item is a whopping 5,000 stars.  Given that there are a total of eight worlds in the main story (six main and two extra), eight stages in each, and three stars possible in each stage, that equates to about 192 stars, far less than 5,000…and that’s where “Tipping Stars” comes in.

When you create a stage you can upload it through the Community feature so others can play it.  Community stages have benefits for both the players and creators.  Players will gain stars just like if it was a stage from the main game and if they like it enough they can tip anywhere from one to five stars to the creator.  This is both a good thing and a bad thing in my opinion.  The good thing is that it’s a great way to earn stars for both players and creators.  The bad thing is that there are people who have made stages where you do absolutely nothing and earn three stars, after which the creator asks to tip them five stars for it.  If you create a stage that actually takes thought and effort to complete with a gold trophy and that I actually had fun going through, you’ll definitely be getting a few stars from me.  However, if you put so little effort into a stage that you literally hit a button and you finish the stage two seconds later earning three stars and expect to be tipped for that…well let’s just say I don’t reward laziness, but actual effort.  That being said, there are a lot of stages where a lot of thought went into them and I applaud (and tip) those creators.  However, there are also a lot of stages where the creators simply seem to be looking for some easy stars. 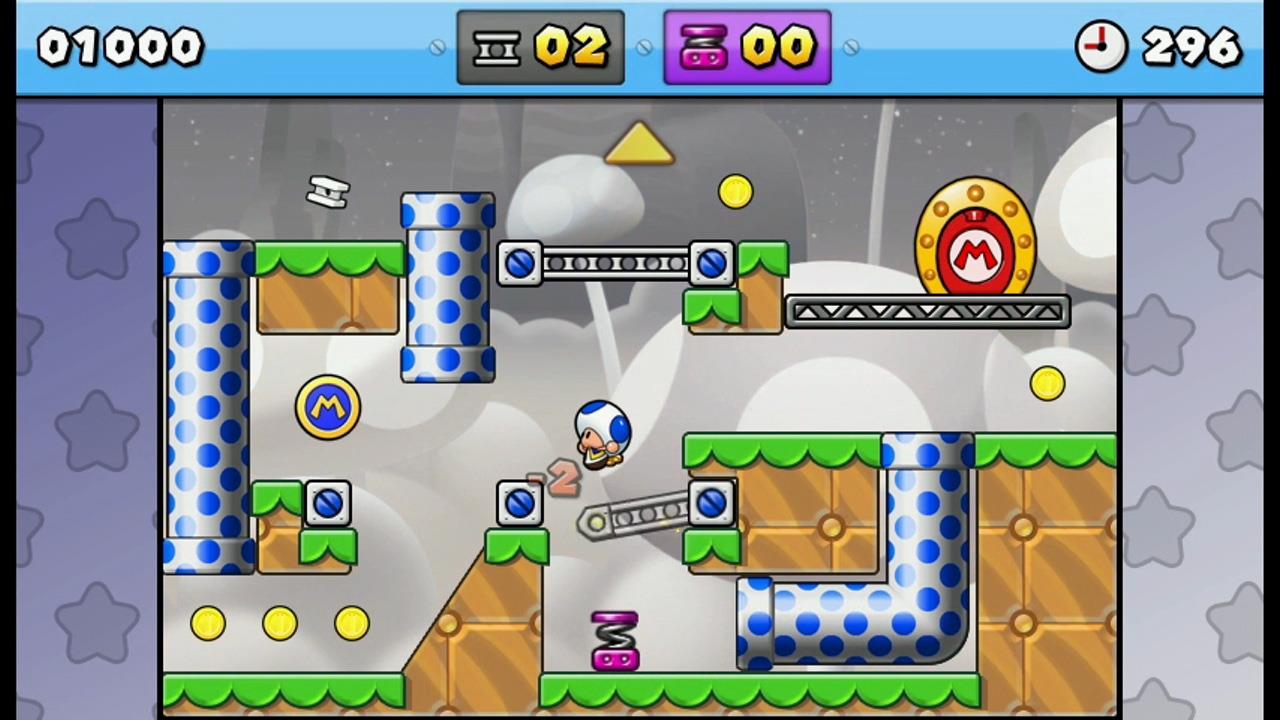 Overall, Mario vs. Donkey Kong: Tipping Stars is fun, but not really difficult which can turn some players away from it.  The main stages, outside of maybe the obstacles, don’t really add much that you haven’t seen in past games.  In fact, there are only three or four stages where I gave up trying to get a gold trophy and settled on silver, and the stages I got a gold took at most about four or five attempts.  The main attraction this time around seems to be stage construction which can be pretty complex once you have everything unlocked.  While I haven’t quite broken out the graph paper to design my own stage, a lot of the stages the community has created can be pretty challenging, including one where I thought it’d be a walk in the park and it actually took about a dozen attempts to collect everything as I kept underestimating how the design played into the solution.

It’s also worth noting that for those watching on the TV while you play (or if you’re like me and record/stream your gameplay on occasion), they’ll see the entire stage at once, but it’s kind of condensed down with borders on the sides, even in the horizontal-scrolling stages.  It’s not a huge complaint, but it’s just a strange design decision in my opinion.  Beyond that, I enjoyed Tipping Stars, but did find it a little easy.  However, for the price it’s still fun and once you unlock everything you can go nuts with the stage builder and practically build anything you want.

Mario vs. Donkey Kong: Tipping Stars is enjoyable but rather easy, even in later stages.  The main attraction here is the stage builder where after unlocking everything you can build practically any kind of stage you wish.  While some people tend to make stages simply to give easy stars in the hopes of getting easy stars in return, there are stages where a lot of thought was put into them and are challenging.  If you like the series, you’ll enjoy Tipping Stars, but you might find it a bit too easy.