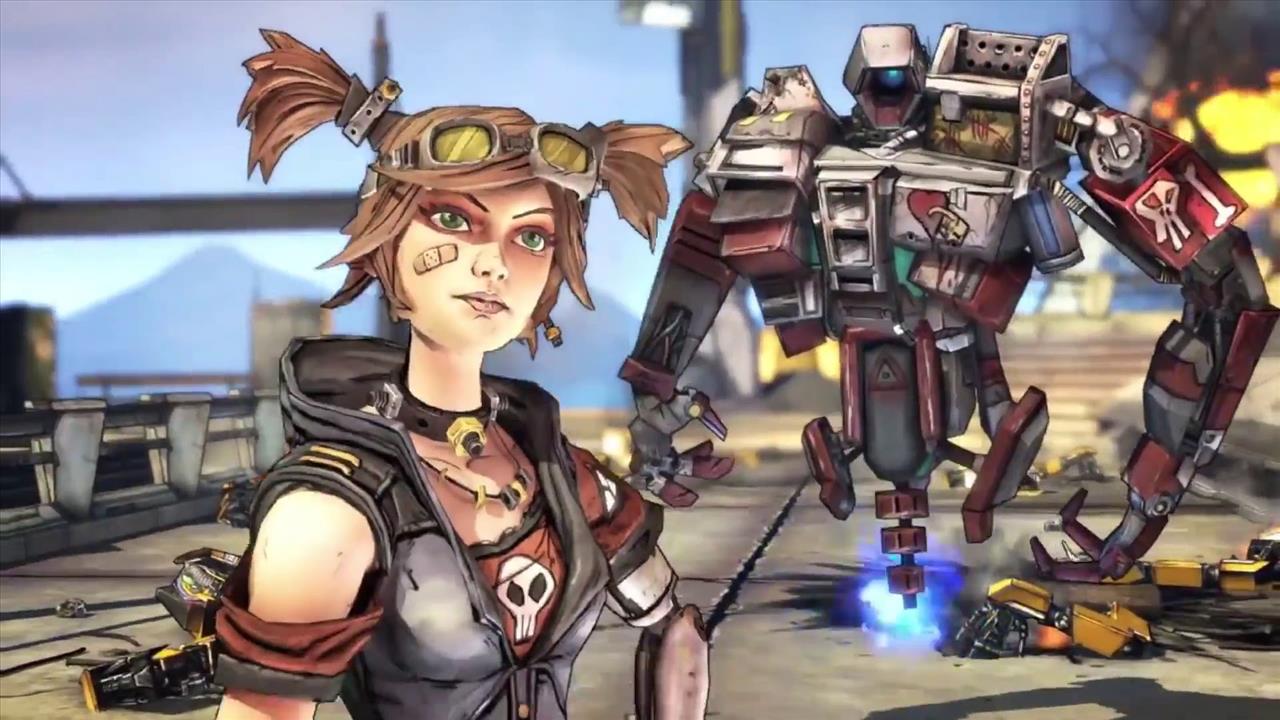 Written by Nathaniel Cohen on 5/7/2015 for PS4
More On: Borderlands: The Handsome Collection

Borderlands, as a franchise, has certainly nailed the art of the opening cutscene. The original may have only opened on a bus, but it set the tone for the kind of lighthearted space western the game was. It also established the template of a skag getting hit by a vehicle followed by a big rock music drop. Borderlands 2’s train battle set to the Heavy’s brilliant Short Change Hero is one my favorite gaming moments of the last ten years. Borderlands: The Pre-Sequel’s rail-launched moon rocket high jacking set to Black Dragon, by the Vines nearly eclipses it - BOOM! PUN ABSOLUTELY INTENDED!
Unfortunately, that’s really the closest The Pre-Sequel gets to Borderlands and Borderlands 2 quality.

Anyway, Borderlands: The Handsome Collection takes Borderlands 2, Borderlands: The Pre-Sequel, and all of their associated DLC and gives them a current-gen hardware graphical upgrade, providing players with hundreds of hours of solid singleplayer or co-op gunplay. As a total package, The Handsome Collection is very hard not to recommend if you’re a fan of the series and upgraded to a PS4 or Xbox One early on and therefore chose not to bother with the Pre-Sequel. Both games are intact and exactly as they appeared previously. The Pre-Sequel definitely wins the graphical battle because it almost looks like a Borderlands game developed on current-gen hardware first and not last-gen. But both games benefit greatly from the increased draw distance and greater particle effects. The close texture detail on the guns and items isn’t nearly as strong for Borderlands 2, but the upgrade is noticeable. And, like I said, you get all the DLC missions and playable characters like Handsome Jack, and Claptrap.

Since Borderlands 2 is a few years old at this point, I won’t rehash my review of that game, but you should definitely seek it out and read it if you haven’t already. It’s amazing. It’s maybe the Twilight fan fiction of Borderlands 2 reviews.

Borderlands: The Pre-Sequel, on the other hand is new and maybe not everyone has yet played it so I’ll break it down like I would in a normal review.
Set between Borderlands and Borderlands 2, The Pre-Sequel tells the tale of Handsome Jack and the lone survivor of the aforementioned moon rocket high jacking and their attempts to retake Hyperion Station from the Dahl-funded Lost Legion. All the usual characters make a return appearance. From a playable standpoint, you have Athena, whom you may remember from the original Borderlands’s General Knoxx DLC. You also have a pre-Borderlands 2 robot boss, Wilhelm; Nisha the Lawbringer; and everyone’s favorite stupid robot with RADHD (Robot Attentive Doofus Hyperstupidity Disorder), Claptrap. Like the previous games, each character has a unique personality, action skill, and skill tree set. The bad news is that Claptrap, the only character I really cared about playing, is terrible in both dialogue and skills. The last time I was that disappointed was when I got mercury poisoning from the sushi buffet I shut down in Ames, Iowa that time. 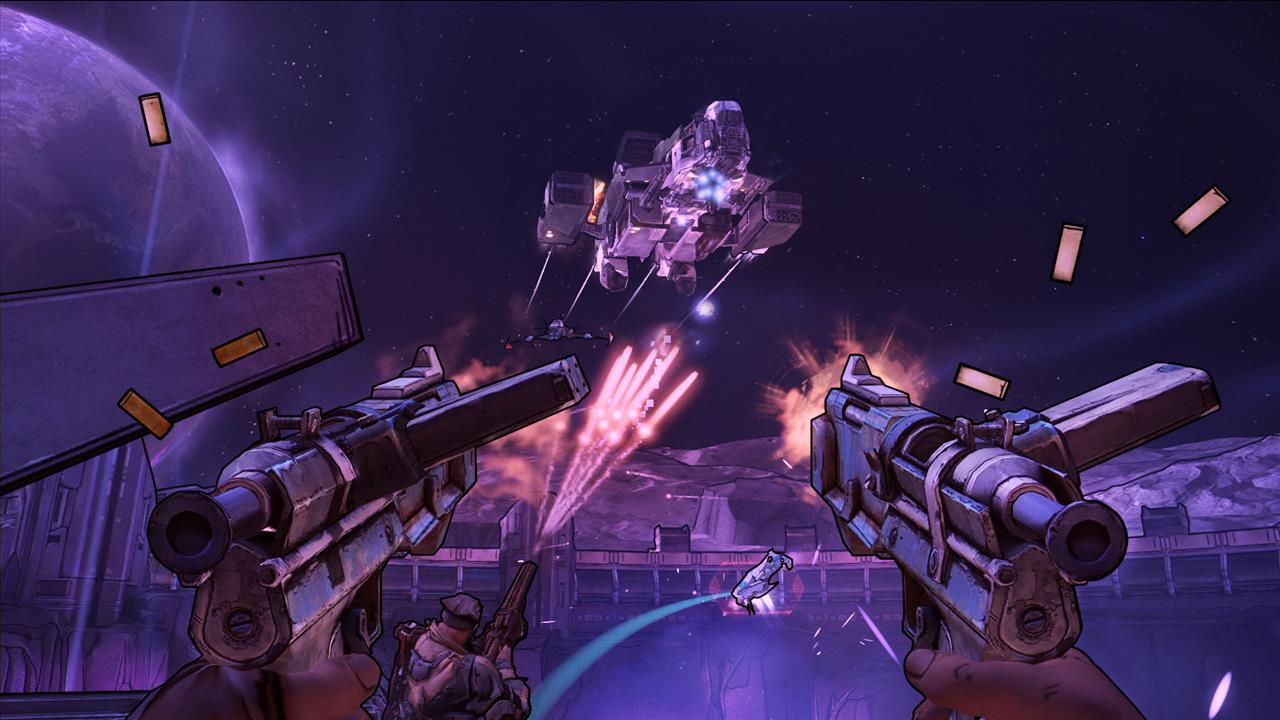 Why is Claptrap awful as a playable character in Borderlands: The Pre-Sequel? Well, one of his skill trees is devoted to co-op, and as a mainly singleplayer-focused gamer, that annoys me to no end. Also, many of the abilities on his tree skills buff certain aspects to the detriment of others. Yes, I know that that has always been part of Borderlands, but with Claptrap is basically every skill. Another thing is that one whole skill tree is rendered unusable, in my opinion, by the inclusion of subroutines (because computers) that buff one weapon type at the expense of all the others. It’s further aggravated by the later skills in that tree that add shield, health, and melee subroutines that reduce gun damage. I HATED constantly and randomly having to switch weapons to take full advantage my skills. I had much more fun playing as the other characters whose skill trees were much more traditional.

If only Borderlands: The Pre-Sequel’s flaws stopped at Claptrap’s skill trees.

Look, I know that The Pre-Sequel was technically developed by 2K Australia and not Gearbox. I also know that the blossom has fallen off the Gearbox flower thanks to the Aliens: Colonial Marines fiasco (I also know that ‘fiasco’ is too kind a term), but Borderlands is Gearbox’s franchise and I think it shows when they don’t handle primary development. There are several niggling complaints I have about Borderlands: The Pre-Sequel. First of all, you have the fact that the driving – excellently handled, previously – is kind of a disaster. You see, the levels are very haphazardly designed and there aren’t the kind of defined paths that were there previously which makes crossing the maps something beyond a chore – approaching a punishment. Furthermore, there is just something off about the combat. I’m not sure what it is exactly, but honestly it seems like there are far more instances when enemies are just spawning all around you for no reason other than to make the game harder.

The problems I have with Borderlands: The Pre-Sequel don’t have anything to do with the new low-gravity and no-oxygen gameplay mechanics. Those work well and are the first notable changes to Borderlands’s core gameplay. Other positive changes are the inclusion of laser weapons and ice elemental attacks – because both of those were sorely missing in Borderlands and Borderlands 2. Another fun addition to the gameplay is the so-called ‘butt slam’ (because Borderlands has to wear its sense of humor on its sleeve, pants, face, arms, and – yes – butt). Off topic – my proudest moment as a human was when my 10 year old son saw that and without missing a beat, called it a ‘ground pound’ attack. 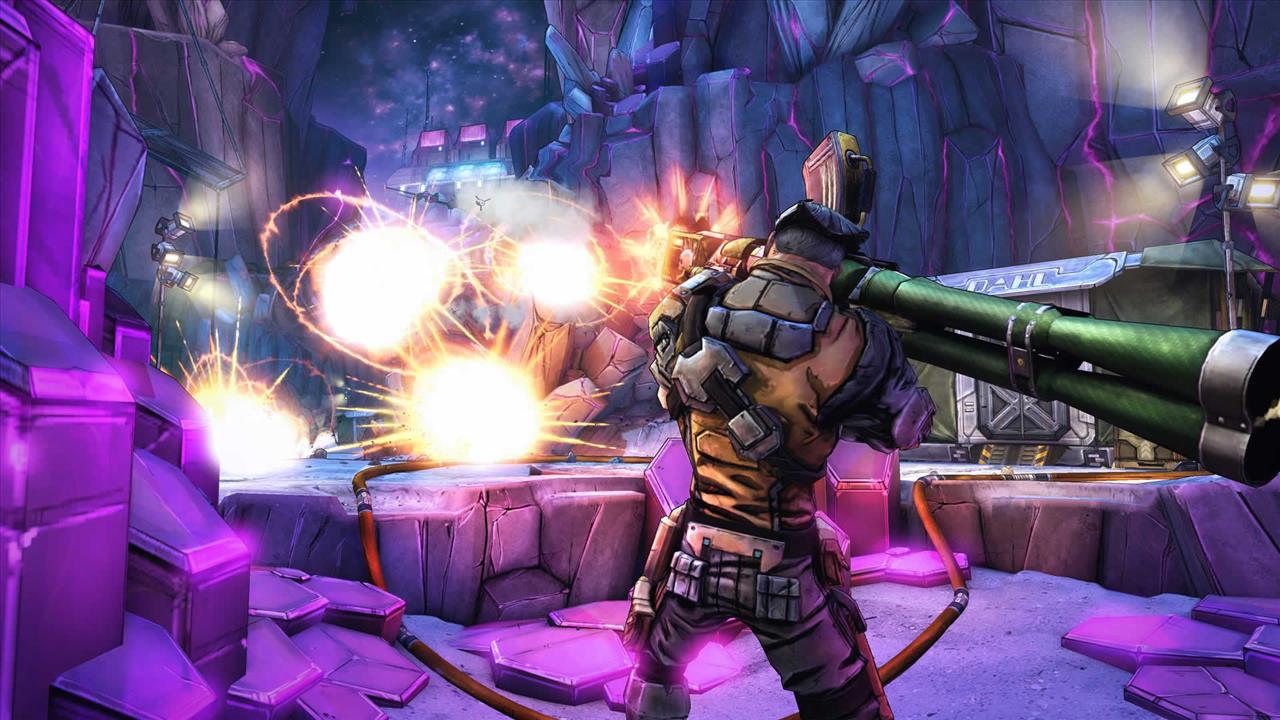 Okay, so maybe I didn’t dislike Borderlands: The Pre-Sequel as much as I thought I did. It’s great when you don’t fully understand how you feel about a game until you sit down to write the review.

There is this one thing though. I feel like I have to mention it. It started with Borderlands 2 and the game’s insistence that it withhold the best loot unless you spend maybe a hundred hours with either game to get to New Game++ where everything is leveled to 60 and your chances of legendary guns are noticeably heightened. Until that point, you’re almost forced to play co-op or learn to accept that purple rarity weapons are the best you can hope for. I’ve played Borderlands co-op before and it is fun, but I shouldn’t HAVE to play it unless I want to – and I don’t want to at this point in my life. Whenever Gearbox gets around to making Borderlands 3, I pray that they fix this. I know they won’t because every developer is still fruitlessly trying to chase the Call of Duty multiplayer dragon and anything I write won’t change their minds, but I have to say something. For most of the gamers out there, playing co-op is fine. I’m just holding onto a tiny little grain of hope.

It’s just hard not to recommend Borderlands: The Handsome Collection. There’s so much content. It received a proper current-gen graphical upgrade and there is tons of both DLC and normal content included. I have a few problems with The Pre-Sequel, but that’s it.