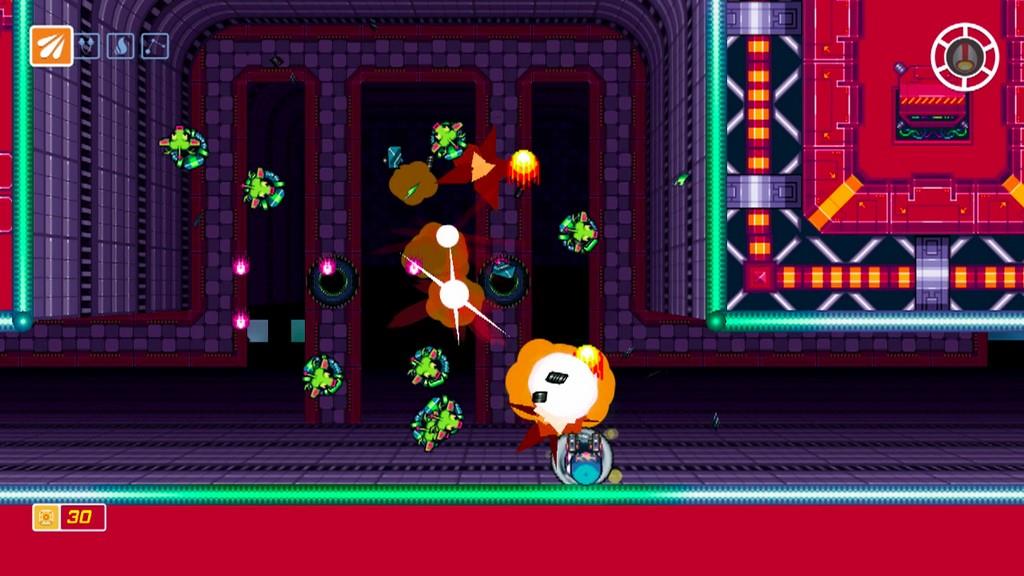 Welsh developer Dakko Dakko has a thing for making games with simple concepts and comprehensive titles. Their first release was The 2D Adventures of Rotating Octopus Character, a name that thoroughly explained what players should expect. They followed that up with the equally specific Floating Cloud God Saves the Pilgrims, which sounds more like a plot spoiler than a video game. Their third title, Scram Kitty and His Buddy on Rails, has now been given a brand new name and released on both PlayStation 4 and PS Vita.

Scram Kitty DX is a fun throwback to an era of arcade shooters when all you needed was a solid gimmick. The idea here is that players race around the levels by riding a rail system that is connected to the walls. You can jump off the tracks in order to connect with another rail, but it only takes a second for our hero to get sucked back to the side of the wall.

Understandably, being stuck to a rail system can be incredibly limiting. For one thing, it means our hero can only shoot straight forward. This handicap also makes jumping to different platforms and traversing the stage a lot more difficult. But it won't take long before players get the hang of handling this unusual craft and the whole thing becomes second nature. And before long, experienced players will be able to turn what used to be a hindrance into a real benefit.

In case the name doesn't make it clear, you play a circular craft that is fighting off an army of weaponized space mice that have kidnapped your cats. Players battle their way through the rodents' ship, freeing the felines by completing different challenges, and shooting down powerful boss creatures. The result is an action-packed arcade shooter that is a lot of fun in short bursts.

Most levels feature four cats in need of urgent rescue, each saved by completing a different task. Simply finding the exit is often enough to give players a single cat, but they'll need to work for the rest. More cats will be rescued when players win boss fights and find every last pellet. Some cats can only be rescued if you catch them in a timed race. Rescuing these lovable kitties will not only make you feel good inside, but will also open up more levels.

Like a lot of simple concepts, Scram Kitty DX has a hard time sustaining the idea. While Dakko Dakko introduces new weapons to play around with and obstacles to overcome, it isn't enough to keep the game from becoming repetitive. It would have been nice to see more variety in the different missions. 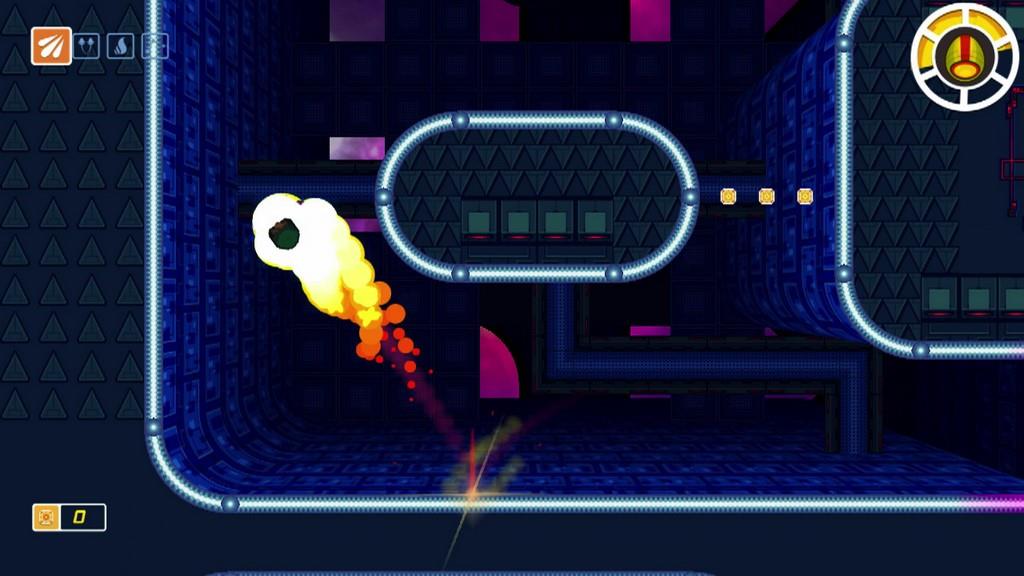 The graphics are bright and colorful, which helps sell its arcade influence. That said, the presentation is decidedly simple, even for an indie game. Like the gameplay, the levels tend to err on the side of repetition. Remove the characters and you would never know this was a game primarily about cats and mice.

On top of the game's Adventure mode, Scram Kitty DX also features a fun Challenge area. Here you'll have to race through the different stages finding the fastest way to round up every cat. It's a frantic race against time. This mode has a different type of energy, and it's a shame it wasn't more seamlessly worked into the main campaign.

While tiring in long stretches, Scram Kitty DX makes the most out of its clever gimmick. Riding the rails may seem limiting at first, but it won't take long before you're bouncing around the level like a pro. I look forward to seeing what Dakko Dakko comes up with next. But more importantly, I can't wait to see what they name it.

Dakko Dakko takes a simple idea and stretches it as far as it will go. Scram Kitty DX may not be an essential purchase, but it's full of good ideas and fun challenges. Too bad the presentation is so bland and the gameplay repetitive. Imperfections aside, fans of unorthodox arcade shoot 'em ups will get a kick out of this action game.