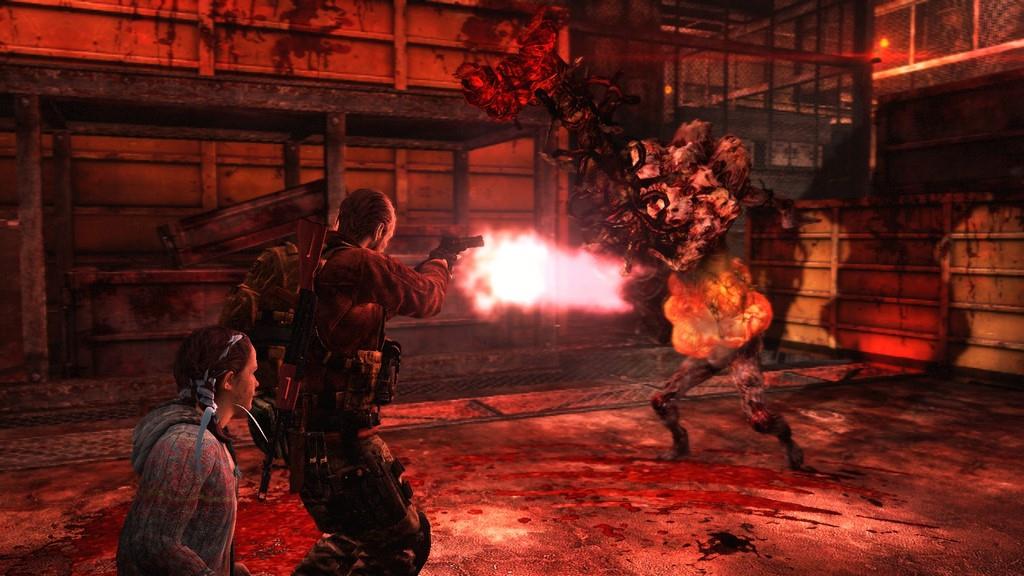 What a difference a second playthrough can make. Here I was, all set to dump on the final chapter of Resident Evil: Revelations 2 after seeing what was the ‘bad’ ending, but then I thought, ‘I should give the good ending a shot.’ And sure enough, it has made a world of difference. The final chapter, Metamorphosis offers a pretty good climax to the Revelations 2 experience, wrapping up the tale of Claire, Moira, Barry, and Natalia.

At the end of Chapter 3, Claire and Moira have dealt with the betrayal of Terra Save, and have found themselves on Alex Wesker’s doorstep, who now has Natalia in her grasp. Claire and Moira’s chapter is significantly shorter than all the previous chapters, and can be completed in a little more than fifteen minutes. It mostly involves a quick jaunt down the tower, and has a few minor puzzles to solve within the few minutes that you have to escape. The tricky part is finding all of the Kafka drawings and tower medals. Also I just want to take a second to say that thanks to Brendon Small’s show Home Movies and the episode about Franz Kafka, it’s all I hear in my head whenever I find a Kafka drawing, so thanks for that Brendon Small. The meat of this chapter is found in Barry and Natalia’s portion, which makes for about three hours of gameplay on your first trip through. This is both a positive and a negative, because while it makes for good storytelling, and I like Barry and Natalia’s dynamic, I hated the middle portion of the chapter, in particular the gas filled caverns. The rhythmical coughing of Barry and Natalia gets old, really quickly. The final boss fight is one for the Resident Evil ages though, it’s a lot of fun against what is probably the best designed monster in the whole game. To get there though you’re going to have to go through wave after wave of enemies.

If you bought the season pass, then you’re going to get two bonus chapters that fill in a couple of plot points, like how Natalia wound up on the beach at the start of the game, and how Moira fits in with the game’s ending. Both of these chapters are a bit short, with Moira’s playing like an extended round of the excellent Raid Mode. Natalia’s side story has her sneaking by a bunch of the island’s infected after waking from her six month slumber. Both of these chapters have a few issues with enemy detection. In one particular instance I was going through Moira’s chapter and would get spotted by an enemy that was outside of a building I was in, I was completely out of view, yet it would somehow get triggered by me, despite being halfway across the map. And once you’ve been spotted you need to sprint to the end of the area or lose a life, and after having it happen three times I had to say screw it, and move on. The gameplay for Natalia’s portion is a little bit more forgiving, but it still has its moments where enemies seem to spot you out of nowhere and can be a little frustrating.

Completing the game unlocks a bevy of new options, including Invisible and Time Attack modes, which makes for some good bonus content, but really if you happen to play through and get the bad ending, make an effort to get the good ending. While it is ruined by Moira’s potty-mouth (as is most of the game, seriously, the writing comes off as incredibly juvenile), it offers a more satisfying conclusion.

If you happened to be purchasing this game on a per chapter basis, then there’s no reason not to finish this game off. The extra chapters are totally optional, but are worth playing through for what they contribute to the story. Since the campaign ends with a setup for a sequel of some sorts, it will be interesting to see where things go from here. But if you had a passing interest at Revelations 2 and wanted to see how the finale compares to the rest of the game, I can say that it is totally worth your time and of course, there’s always the stellar Raid Mode.

Resident Evil: Revelations 2 comes to a proper close with chapter 4; Metamorphosis. The great gameplay carries through to a satisfying ending and Raid Mode continues to be a blast.