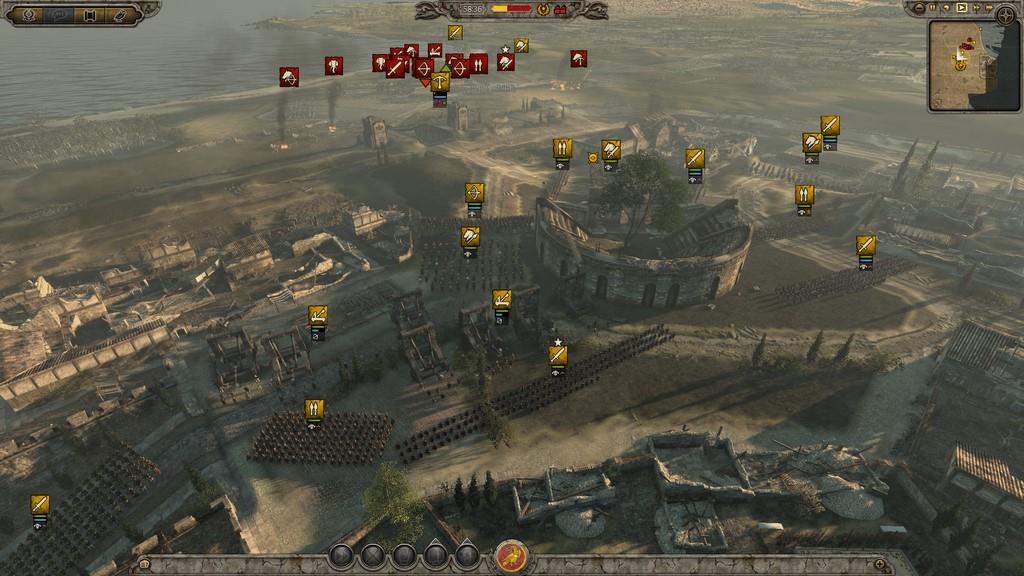 From the opening cinematic it becomes abundantly clear that Total War: Attila is going to pull out all the stops to put forth the very best production Creative Assembly are able. Though that opening cinematic does detail the base shell of its former glory that has become the empire of Rome, it also seems to frame Attila as a bit of a heroic figure, a fresh light to shine in the darkness that has befallen the "civilized" world. In reality, this is a game about war and you will find no heroes brutalizing the land and peoples of the 5th century. The narrator closes the cinematic: "The air was filled with smoke and blood..." But where is that blood? Because at the same time that this game is about the killing of armies and sacking of cities, it's remarkably PG in its unaltered state. Now there is already DLC available to purchase to insert the gore, but what is so total about war that's been whitewashed of its blood and guts? And why was there day one DLC, and not five weeks later two more expansions that insert what seems should be already included as an option in the settings and unlock troops that were already present, but unplayable, in the release version.

So there is this first impression of the game that kinda works two ways. On the one hand this is a very graphically impressive AAA strategy game that does not pull punches with production values. But on the other this locked and loaded DLC really gives that sleazy feeling that this is just DLC for the sake of squeezing out more cash from customers than really pushing the game further through continued development. Perhaps this is par for the course with the Total War series. I've not played a game in the series before. So as a new player, I can't really speak on that. I haven't evolved with the game but I also get the benefit of looking at it with fresh eyes. So take everything that follows with that grain of salt.

Basically, from the main menu you get the option to jump into a campaign or fight individual battles and both can be done via single or multiplayer. A battle is just that, pitting one generals units and reinforcements against another and can be played as recreating historic skirmishes of the era or detailing new settings to come up with any scenario you like. The campaign strings these battles together with the narrative of an empire and whole lotta micromanaging to keep up the war effort. The game is called Total War, not Combat Simulator, and I guess this is where the 'Total' part comes into play. Welcome to your geopolitical nightmare of supply lines, noble intrigue that's not all that intriguing, the appeasement of occupied territories and subsequent squashing of rebellion when you fail, diplomacy that the AI never agrees to no matter how much you sweeten the deal, and more. This whole aspect is probably something that has grown somewhat organically for Total War veterans but just seems like a poor man's Crusader Kings II to a newbie like myself. The mechanic works, though much of the numbers behind it aren't fully explained and it's not terribly fun. What you do get is the sense that the maintenance of an empire is best left to the bureaucrats and politicians, not the field generals. But in Total War you get to be all things to all people.

The one thing that this turn based preparation phase in between the battles does impress is just how tenuous the grip on an empire is at all times. The AI does a good enough job to harass you in the undefended corners of the expanse of your territory, and controlling a territory of any size with limited resources will always leave a corner or two undefended. Running en empire is about putting out a million little fires, not the determined single minded focus defeating a bogeyman enemy. The saving grace in all of this is how the game doesn't force you into this role. It lets you take it on if you so choose, or grow into it, or avoid the majority of it entirely depending on which faction you choose at the start of your campaign. 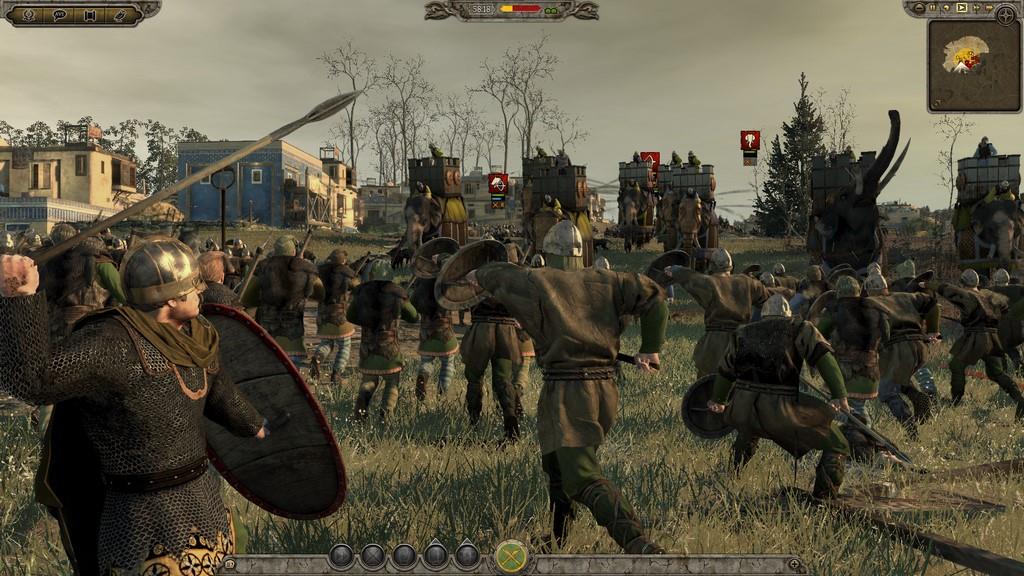 Fancy yourself a Hermes Conrad, then take on the Eastern or Western Roman Empire and jump head first into the bureaucratic quagmire. Form the start you'll have a vast expanse of territory and threats to juggle. Would you rather practice on a smaller nation but still have some size to your territory, maybe a Nordic tribe or Barbarian kingdom. Perhaps you'd like to start small as a simple city-state and grow into a territory to control, then the Goths or Vandals might be your pace. But best of all, just take control of the nomadic Huns, forgo the necessity of empire let the stars of the night sky be the only permanent roof you require as you pillage your way across the lands, only suffering the most minimal of planning and preparation in between raids. By choosing different factions and their starting points the campaign can take on a variety of forms, which is great to introduce yourself into the minutia of total war in digestible chunks, and provides plenty of replayability among the various roles.

The bread and butter of the game is the battle, so once you've decided the level you want to mire yourself in between those, you can get to it. The battles are well done. There are a variety of units that mostly follow the rock-paper-scissors approach of one unit exploiting another's weakness in a cycle. However there is much more depth than just the units on the field as fatigue, formation, morale, terrain, ammunition for ranged units, weather, and other factors can really influence the outcome a given encounter of units or battle as a whole. What is most important is the controls are responsive and simple. There is no need to memorize 20 different key-mapped actions to orchestrate your units. Simple mouse clicks and directional keypresses are usually enough. Battles can be sped up or slowed down and although I sometimes found it a bit wonky to swing the camera into the vantage I really wanted, for the most part it's easy to survey the battlefield, move units into position, and execute attacks. 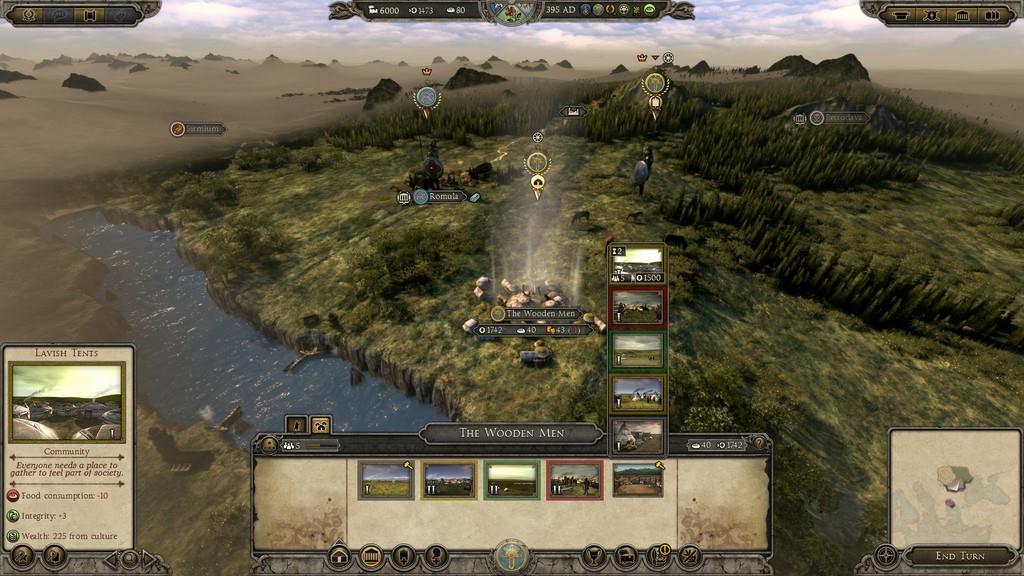 And watching the battles unfold is gorgeous. The music and graphics are very well done, although it comes at somewhat of a hardware cost. The game yearns for a PC a bit on the higher end than the typical RTS game requires but delivers on that hunger. I do think it's a bit of an open secret that we seem to forgive the cutting of corners on some production values in strategy games (as long as the strategy itself is good) that an FPS or RPG could never get away with. Total War: Attila delivers with the visuals, menus and set up in ways that I would be hard pressed to find fault. It also adjusts too. The game dynamically adjusts output depending on available GPU memory and whatnot. I only know this because I happened to notice it in a note buried in the loading screen of one particular battle. The game kindly informed me that due to a lack of resources my output was being lowered accordingly. The battle still looked spectacular as I assaulted a city along the shore, tearing through the defenses and units through the gloom and rain, staving off reinforcements by sea and taking the city.

Combat can take on many forms. The landcape is detailed enough to be appreciated but also presents advantages and challenges of it's own. Defeated and fleeing armies can be ambushed giving a much different feel to larger skirmishes of full strength foes. Fighting through city defenses, some of which will require a siege weapons to overcome their high walls, is an entirely different experience, and taking to the sea for navy battles is yet another. However that last is not necessarily a grand experience. I found the nordic tribes to be a bit unplayable, as the naval combat they will see so much of requires a finesse and maneuverability that either I lacked sorely or the game mechanics just didn't permit. I was slaughtered in one particular battle becase three of my ships, including my general, all got stuck up against one another after attacking and defeating an enemy warship. The rest of the battle they just floated there, unable to break free of one another until the rest of my army was slaughtered in their weakened and leaderless state.

As a new player I think Total war does a good enough job introducing a player to a very complex environment. The prologue as a gothic tribe is robust enough to give a player a solid footing in this world, and the ability to choose granularly between blazing through villages as the Huns goes a long way to keeping one interested as they get their head around the finer points of the bureaucratic side of a war effort. Whether or not this game is value for the money for a veteran of the series, given the top dollar price tag and promise of an endless assault of DLC, that I can't answer.  But I can say as a new player, the actual art of combat is a very satisfying experience even if the preparations for such are a bit of a chore. The production is well put on, the settings, terrain, and changing weather and seasons add a vital slice of realism to the campaign and the world is easy to navigate around and issue commands and tactics from.

For the uninitiated, Total War: Attila does a good enough job introducing a very detailed world and mechanics. What it does best is allow a player to get right into the meat of combat and enjoy orchestrating campaigns across gorgeous battlefields. While micromanaging the war effort and empire can be detracting, there are enough game modes and variety in the campaign to ween someone into the thick of it. At the end of the day, the battles are satisfying and the AI is good enough. It is not without it's problems, but it's as good a strategy game as you'll likely to find.