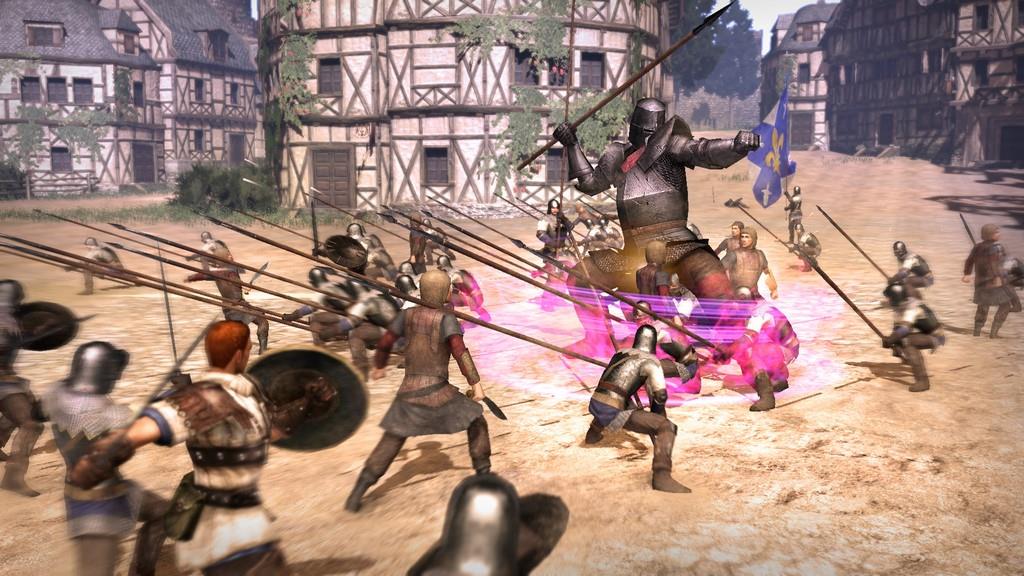 Written by Nathaniel Cohen on 3/17/2015 for PS4
More On: Bladestorm Nightmare

Coming to the PS3 and PS4 in digital form is chaos—absolute chaos—in the form of Bladestorm Nightmare. I don’t have a lot of experience with the Bladestorm franchise or it’s Eastern brother, Dynasty Warriors (besides that one DW Gundam game I reviewed several years ago), so Bladestorm Nightmare is the most Japanese thing that’s happened to me since that night I shut down the sushi buffet at a Mongolian barbeque in Ames, Iowa. Don’t ask what happened that night because I don’t remember. It’s not always Cheetos and Mountain Dew with gamers or booze with writers, and we should leave it at that.

When you first boot up the game, assuming the heat death of the universe doesn’t occur first (my digital copy took two attempts and over 12 hours to fully install), you’ll be tasked with creating a mercenary. I’m not going to say that all the faces look the same, but I will say that Tecmo and Koei perhaps have as many words for sexy eyes as people from Atlanta have for snow—or people from L.A. have for rain.

Once you create your chubby, redheaded, sexy-eyed lady merc (or was that just me?), you will be dumped into a tavern where the world’s mostly ridiculously acted and poorly translated barkeep says words like “hitherto” far too often. He also acts as your agent allowing you to sign contracts for either the French or the British.

Once you hit the battlefield, you assume control of troops ranging from sword-and-shield units to cavalry, pikemen, archers, or any number of other specialty units, as you progress through the game. Your unit starts off small, but as you gain fame and SP you can level up in many different way allowing you to command more troops, do more damage, or use your special abilities faster. 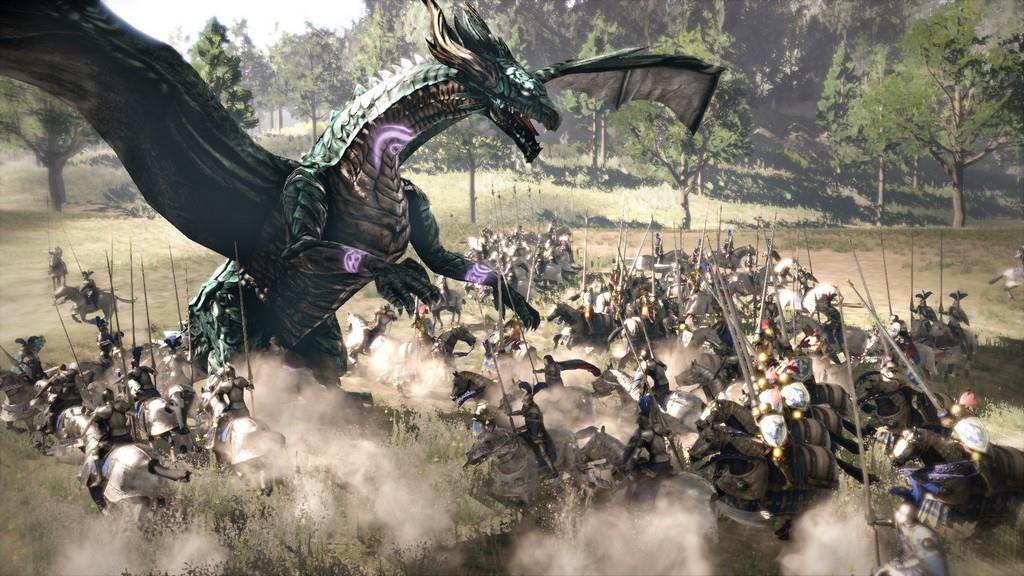 There’s a basic problem with the combat though: it’s dull as snot for significant portions of the game. You’ll find yourself spending far too much time wandering around boring battlefields populated by trees, rivers, castles, and other troops, and occasionally hitting a button every now and then whenever you encounter the enemy—that is if you can even tell friend from foe. I know about the so-called fog of war, I’ve watched the History Channel before; however, this isn’t a “fog” as much as it’s a “lack of distinctive features.” Bladestorm Nightmare is a video game that’s at least half about demons invading France. If I wanted realism, I’d go back to TPS Report Simulator 2014 (the selection of paper types in TPSRS 2015 isn’t high enough if you ask me). Even the demons in the Nightmare storyline don’t stand out enough. Think about that for a minute.

When you do find the enemy, you have three abilities to unleash. Such unleashing usually presents itself as bigger damage numbers followed by holding R1 to continue in basic combat while the ability recharges. But again, everything looks so indistinct and muddled that you can’t tell what’s going on or even that you’ve dispatched the enemy. I’ve honestly felt a more visceral charge out of two masses of troops slamming into one another in literally every Bernard Cornwell novel I’ve ever read. A good video game should be able to best a book in visceral thrills any day of the week.

As you level up and get deeper into the game, obviously it starts to get marginally better as you get accustomed to it. Leading bigger and bigger numbers of soldiers and ever more interesting units is cool, and slamming into the flank of a formation while leading cavalry actually approaches fun, but good luck finding any gamer that isn’t already a huge fan of the series willing to slog through those early hours. It’s no different in the Nightmare story either, the enemy units are simply monsters. 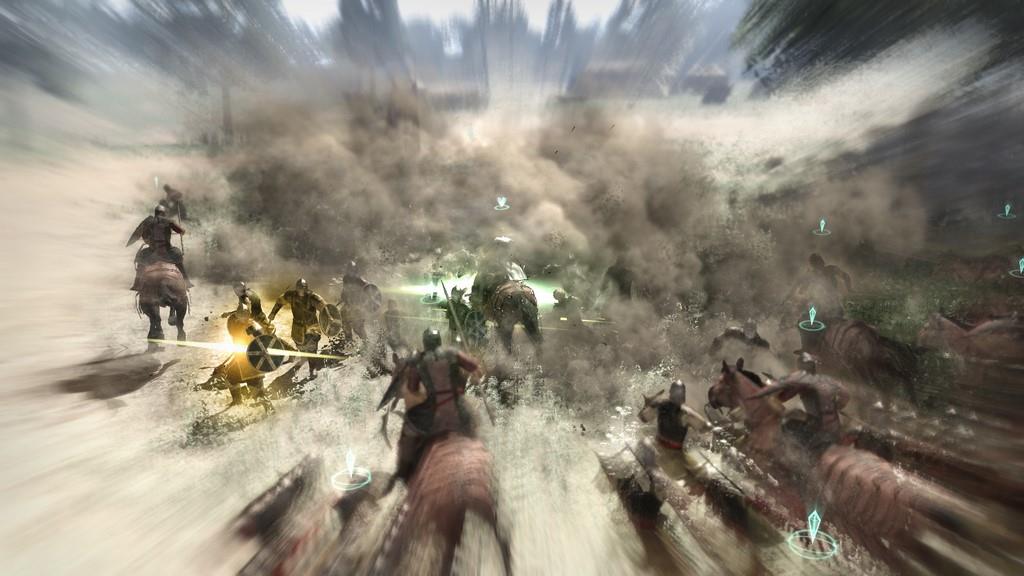 Besides the story mode, there is Free Mode where you can replay previous battles, and Edit Mode that lets you create and then station mercs in other battlefields, for a set amount of time, for money. You don’t actually get any gameplay then. You simply wait a set amount of time. On the plus side, if you’re not as creative as I am, you can scroll through other player-created mercs and marvel at the lengths people will go to to stand out, impress, or disturb. How about a giant waif with Bayonetta glasses, is blind in one eye, has blue hair, a hatchet face, and years of nightmare and therapy? Well played, gamer whose online I.D. I won’t mention, though you should definitely seek some help.

Now, at this point, I should remind you that I was lucky enough to be reviewing the PS4 version, so at least I have all that graphical horsepower at my disposal so that, at the very least, the game looks good.

That’s actually a big ol’ nope, good buddy. Bladestorm Nightmare on the PS4 is the first game I’ve seen on the console to look unquestionably bad or even (gasp) last generation. Sorry. Also, the soundtrack and effects are utterly forgettable. It was supposed to at least have a draw distance far enough to see from one side of the battlefield to the other. And while that’s arguably true, try explaining that to my foot soldiers slaughtered by a troop of cavalry that popped in when we were five feet away.

Look, the straight facts are that if you’re not a die-hard fan of the franchise, Bladestorm Nightmare is the hardest of hard passes. It’s not the worst game I’ve ever played, but it’s the first really bad game I’ve played this generation.

Bladestorm Nightmare is neither interesting to play nor good looking in any way, shape, or form. There are books that offer more visceral medieval combat than this. Seek those out and do anything else with your PS4.