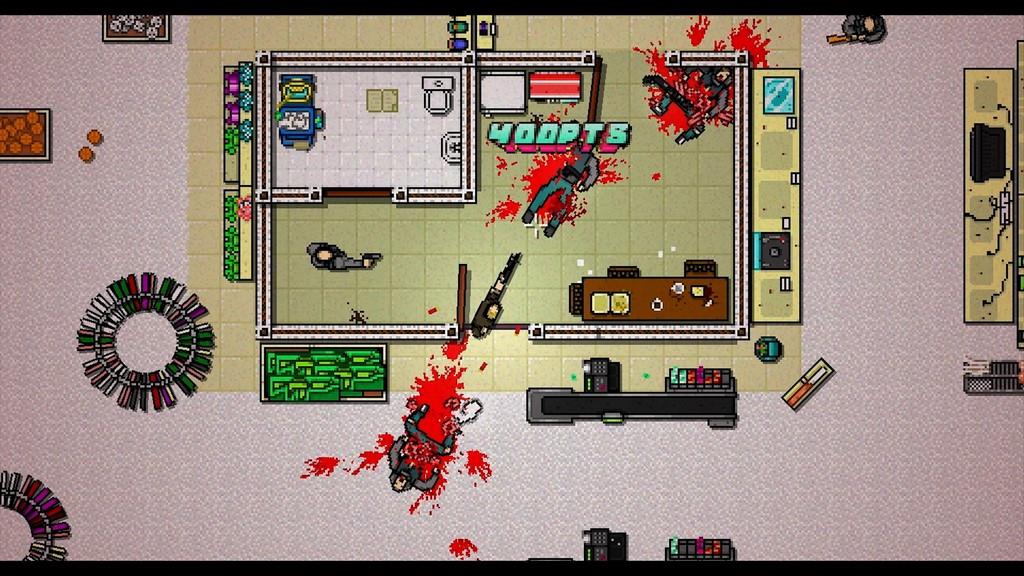 Hotline Miami 2 is everything you would expect out of the sequel. It's still as violent as ever before and best of all, it's still incredibly fun. With multiple playable characters, an interesting story, intense gameplay, I have a feeling that Hotline Miami 2 will be on my top 10 list of games when 2015 comes to a close. Aside from a couple of issues, and one annoying issue, Hotline Miami is incredibly fun and is a game that shouldn't be missed.

The gameplay of Hotline Miami 2 is nearly identical to the first game. You play from a top down perspective and have to murder everyone in your path to advance from level to level. This time around, instead of playing as only one character, the story is told through multiple characters, each with their own stories and special abilities. You have a Detective who would rather shoot first and ask questions later, a writer who, in an interesting twist, doesn't actually kill anyone, instead he knocks them out and empties guns from enemies. Then there are my favorites, a group of copycats who are trying to recreate the killings from the first game. With these characters, you'll see the familiar mask system come into play.

This time around however, the masks represent playable characters. You have a man who doesn't use guns but deals lethal blows with his fists, a character who can dodge roll, a character who can dual wield machine guns and a brother and sister pair. Alex the brother, wields a chainsaw while Ash the sister wields a pistol. There is another character who can swap between one of three different snake masks. One of them makes thrown weapons lethal, another gives you a silenced nail gun and another which gives you lethal punches and nunhchucks. There are a couple of other characters but I won't say anything about them due to spoilers. All I will say is that fans of the first game should really get a kick out of them. Even as someone that played the first Hotline Miami, I found the beginning of the story to be incredibly confusing because it constantly jumps back and forth in time, constantly swapping between characters. However, as you continue playing, the stories all come together nicely and it's interesting to see how the events of the first game have spawned all of these events that play out in front of you.

The Hotline Miami games are all about trial and error. You go running into an area and you will die within seconds. You really have to scope out an area, think of a gameplan and execute said gameplay perfectly or you are dead. The first game had a lot of action in small enclosed areas where you could easily run to a small room and hide. Hotline Miami 2 however expands the levels. This is both a good thing and a bad thing. It's great that levels are bigger, which makes the game much more difficult, but also provides a great sense of accomplishment when finishing an area. You'll have weapon wielding bad guys, guys with guns, animals, and then bigger enemies that can only be killed in a certain way. 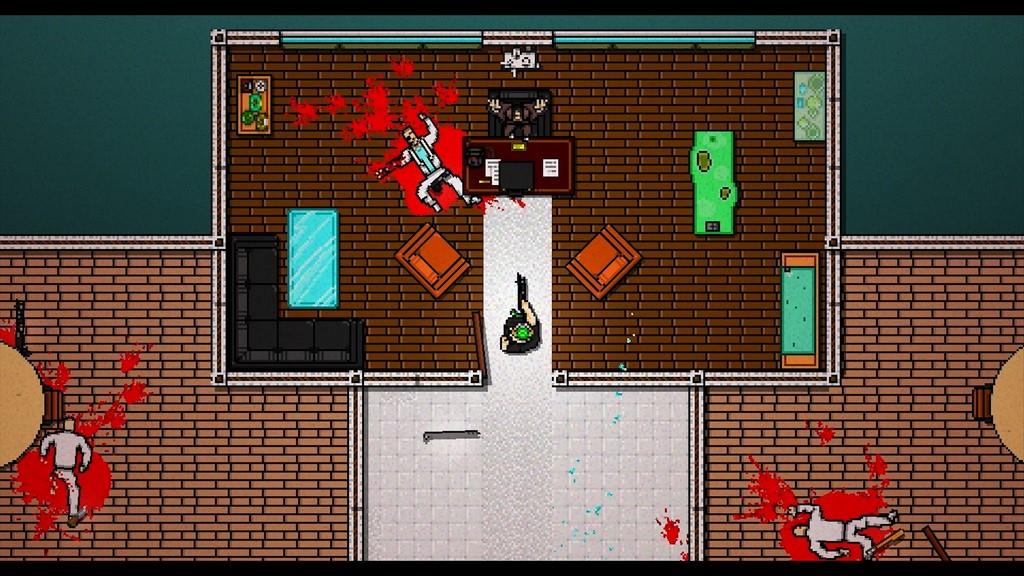 Again, strategy is the key to survival. A strategy I like to use is to pick up a gun and hide somewhere. Then, I like to have a melee weapon handy. I will fire off the gun which will send some bad guys my way. Then I'll drop the gun and kill all of them at once as they get through the door. Now, the bad part. My biggest problem with Hotline Miami 2 comes from the fact that since the levels are bigger, you often have a hard time seeing what's out in the distance. You may kill some bad guys, use the shift key to look ahead and then out of nowhere a gun blast kills you off screen. This is extremely frustrating because there is absolutely no way to see this coming. You just have to hope and pray that there is nothing in the distance before you get there. I understand these games are meant to be challenging, but this is extremely frustrating and not the fun kind of frustrating. This is just cheap and unfair. It also doesn't help that there are windows galore now so you can expect that bullets will be flying at you from all directions without warning. There are also some issues where enemies can glitch out of the game and then reappear out of nowhere. One time I throw a weapon at an enemy and he went got knocked back through a wall and disappeared. I thought that since he disappeared that he was dead. Not, a few seconds later, when I thought I was in the clear, he magically reappears in the level and kills me instantly. Very annoying. That being said, not every level is like this. There are a few with this issue that will make you want to pull your hair out, but then again, there are plenty of levels that are perfectly fine that are incredibly fun and offer challenge without said issues.

Now, one thing that people might be wondering about is the soundtrack. Many consider the soundtrack to the first Hotline Miami to be one of the greatest soundtracks in videogame history. I am happy to say that not only is the soundtrack to Hotline Miami 2 amazing, I personally consider it to be better than the first game. There is one incredibly difficult level in particular where you will be getting killed constantly by bullets off screen. This is one of those levels that is incredibly frustrating and not of the fun kind. Thankfully, they couldn't have picked better music to go along with these levels. Even though I was dying constantly and was incredibly frustrated, the incredible soundtrack kept me going, so much in fact that I was sad when the obnoxious level ended. The PC version of the game will also be getting a level editor soon although it wasn't available to play yet. Hotline Miami is fun enough as it is, but once the community get a hold of this, you will get an endless stream of content coming to the game, which will add hundreds of hours of replay onto it. I cannot wait to see what brutal levels the community can come up with.

If you enjoyed the first Hotline Miami then you should absolutely pick this one up. It is incredibly difficult, more so than the first game. Yes, it is unfortunate that some of the levels suffer from incredibly cheap tactics and you will die over and over again, but these issues are few and far between. Hotline Miami 2 offers up some incredibly fun and addictive gameplay. The story may be confusing at first, but it's one of those stories that pulls me in once the pieces all start to fall together and I see what is going on. Finally, as I mentioned before, the game also features and absolutely incredible soundtrack that makes every level a joy to play on. I highly recommend this game for anyone looking for a challenge, and most of all, fun.

Hotline Miami 2 is everything you would expect out of the sequel. It's still as violent as ever before and best of all, it's still incredibly fun. With multiple playable characters, an interesting story, a phenomenal soundtrack, and intense gameplay, I have a feeling that Hotline Miami 2 will be on my top 10 list of games when 2015 comes to a close. Aside from a couple of issues, Hotline Miami 2 is incredibly fun and is a game that shouldn't be missed.