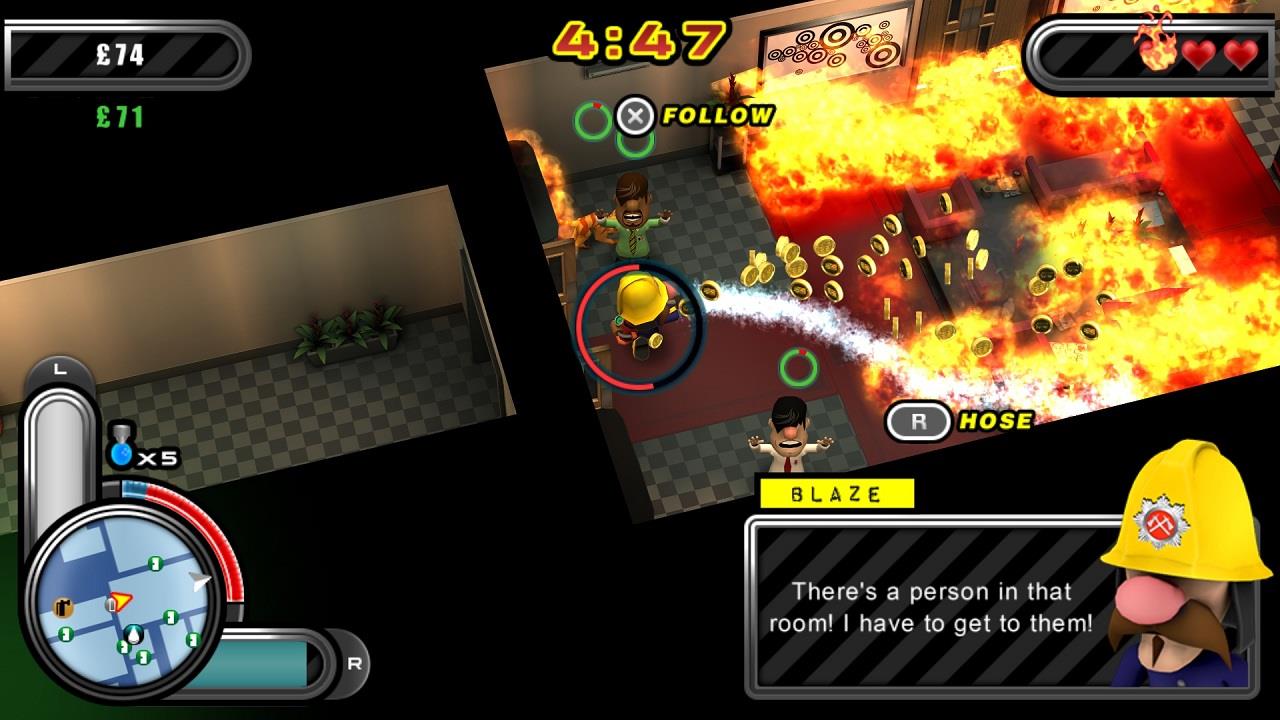 Although you might not know them by name, Laughing Jackal has become one of the PS Vita's most consistent developers. Games like Cubixx and OMG HD Zombies prove that this team is capable of creating aggressively addictive experiences that will stick with you long after they've been deleted off the memory stick. Their newest game is Flame Over and it promises to be their hottest release yet. Unfortunately, this firefighting roguelike left me a little cold.

You play a friendly neighborhood fireman who has been tasked with charging into a burning building to extinguish the blaze and lead the survivors to safety. To add even more pressure, we're given only a few minutes to race through each room and complete the various missions. Thankfully, each person you save adds an extra minute. But beware; you'll lose valuable seconds every time somebody dies on your watch.

In essence, Flame Over is a dual-stick shooter where you fight flames instead zombies or geometry. Our hero goes into each scenario with two trusty weapons -- a hose and a fire extinguisher. The hose is great for long-range attacks, while the extinguisher works best for nearby blazes. When in doubt, the fireman can throw water grenades to clear large areas.

Instead of taking damage like most shooters, the hero of Flame Over wears a suit that keeps him safe. But don't get too cocky, because the suit can only resist so much heat. It's important for the player to keep track of the heat gauge, because exceeding the threshold will result in a loss of a heart. Lose too many hearts and it's back to the beginning of the game for our hero.

From the furniture to the plants to the nearby rugs, practically everything in Flame Over is flammable. The fire will quickly spread throughout the room, which can make it difficult to contain the blaze. Worse yet, fireballs can send the flames into other rooms. And because electrical fires will continue to cause damage, it's imperative that players find the fuse box and cut the power. Once the fire has been extinguished, the players will move on to an even tougher fight on the next floor.

Beyond saving the thankful survivors, our hero firefighter will also run into a stubborn woman who refused to leave. Even if it means dying in one of the most painful ways possible, Miss Ion needs the player to complete a mission before she'll even think about moving. Although you're looking for different items, most of these missions play out the same way. She'll forget something or need you to collect a group of files. Later in the game, she'll need players to hack a computer by hitting the terminals in a specific order. All of this is busywork, but it's important if you want to earn the Upgrade Token she drops on the way out. 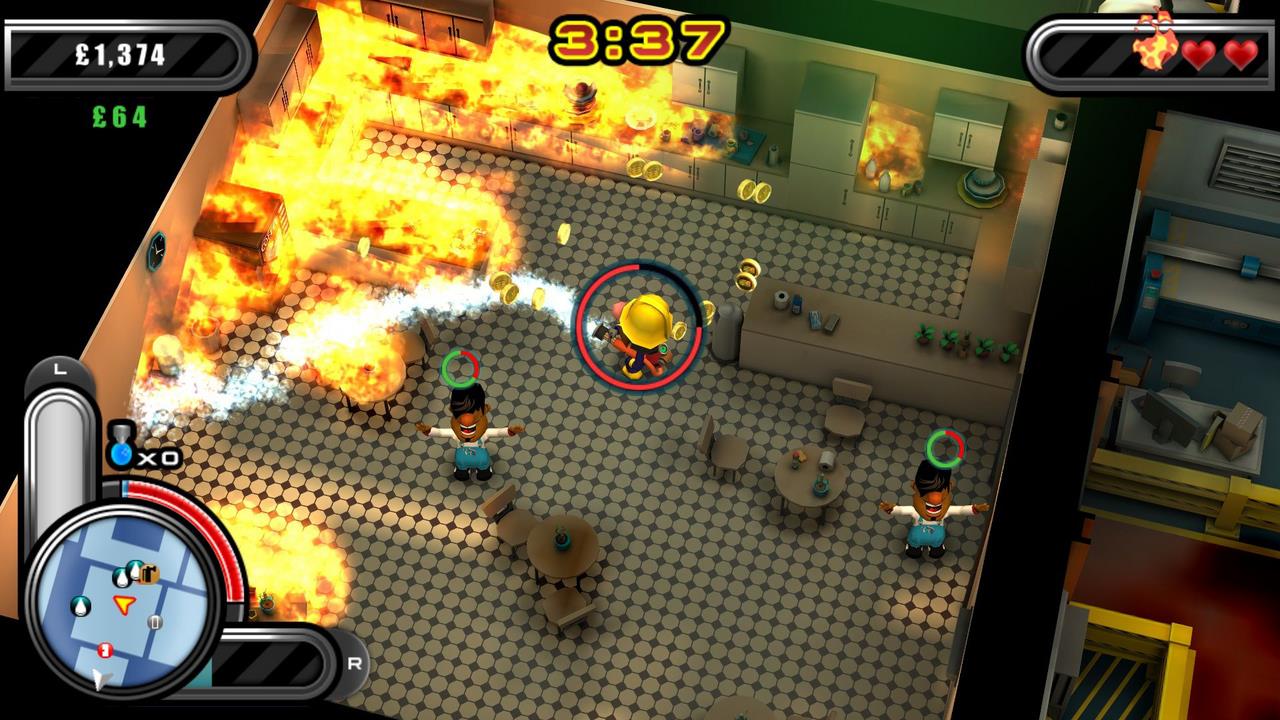 Flame Over starts out in an office building, but quickly moves on to an executive building, laboratories and an especially deadly factory. Although the structure is largely the same, each area adds new obstacles to overcome. For example, regular blazes will make way to chemical fires in later levels. It's up to the player to not just survive, but figure out how to deal with each level's unique challenges.

In the real world, putting out fires is an incredibly dangerous profession. Knowing these risks, firefighters are trained and prepared for whatever hazards will likely stand in their way. The same courtesy is not offered in Flame Over. Instead of offering a tutorial mode (or even an instruction manual), Laughing Jackal throws gamers into the middle of a massive blaze and hopes they'll figure out what to do.

This approach left me completely baffled, to the point where I wasn't sure how to accomplish simple tasks. It took me several tries before I even realized I was playing a dual-stick shooter. I had no clue how to complete stages, why the survivors kept dying and how to upgrade my character. In fact, the game didn't click for me until I watched a Let's Play video created by the developers. 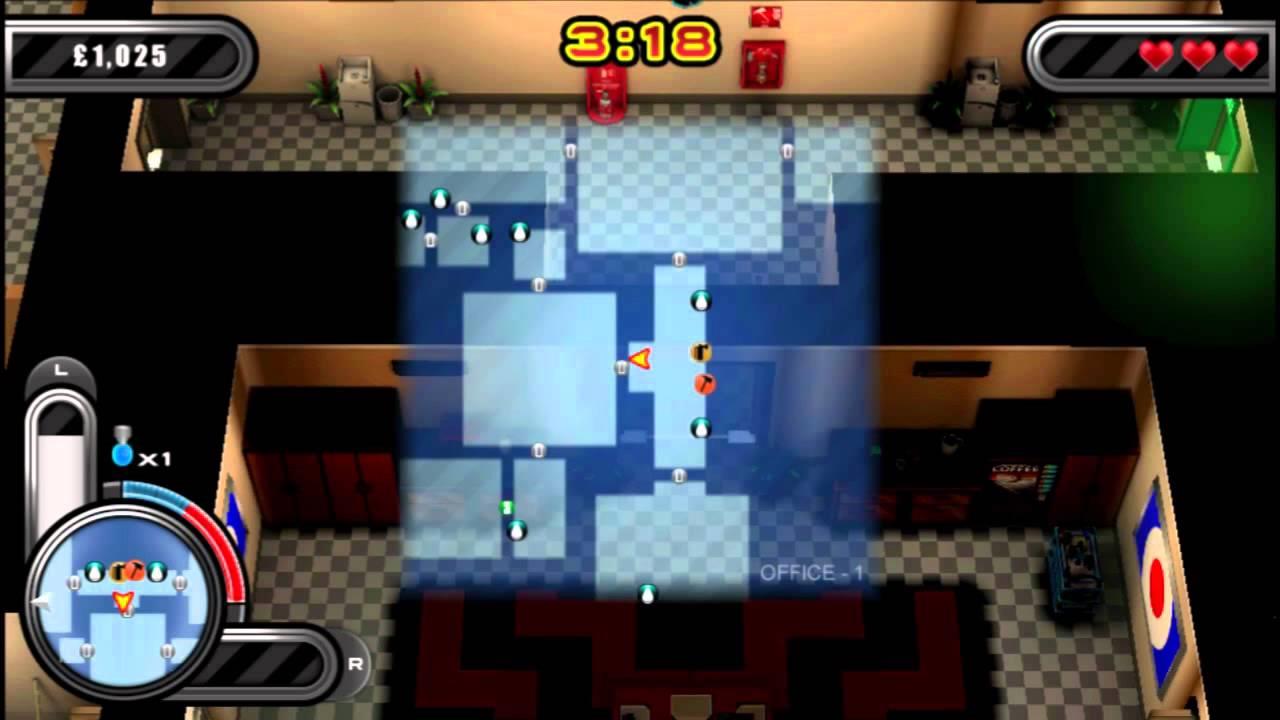 Instead of being overjoyed to finally wrap my head around Flame Over, I found myself annoyed that learning the basics required a trip to YouTube. It's one thing to want players to figure out the best means to overcoming obstacles, but players should have a basic understanding of what is expected of them when going in. This game introduces a number of new mechanics and fails to properly explain any of them.

There comes a point where the frustration ends and the game starts being fun. Unfortunately, this moment came far too late for me. Even after getting the hang of it, I found Flame Over better in concept than execution. Its vagueness felt like it was constantly trying to keep me at arm's length, which I found to be incredibly off-putting.

Flame Over is an occasionally fun action game with a lot of good ideas. Unfortunately, it's awful at conveying important information and has a tendency of erring on the side of being unfair. Given Laughing Jackal's track record, Flame Over is a big disappointment.

Flame Over is purposely vague, to the point of being perplexing at times. While the game is action-packed and full of interesting ideas, the package doesn't come together in a cohesive fashion. For a game about firefighting, Flame Over left me cold.