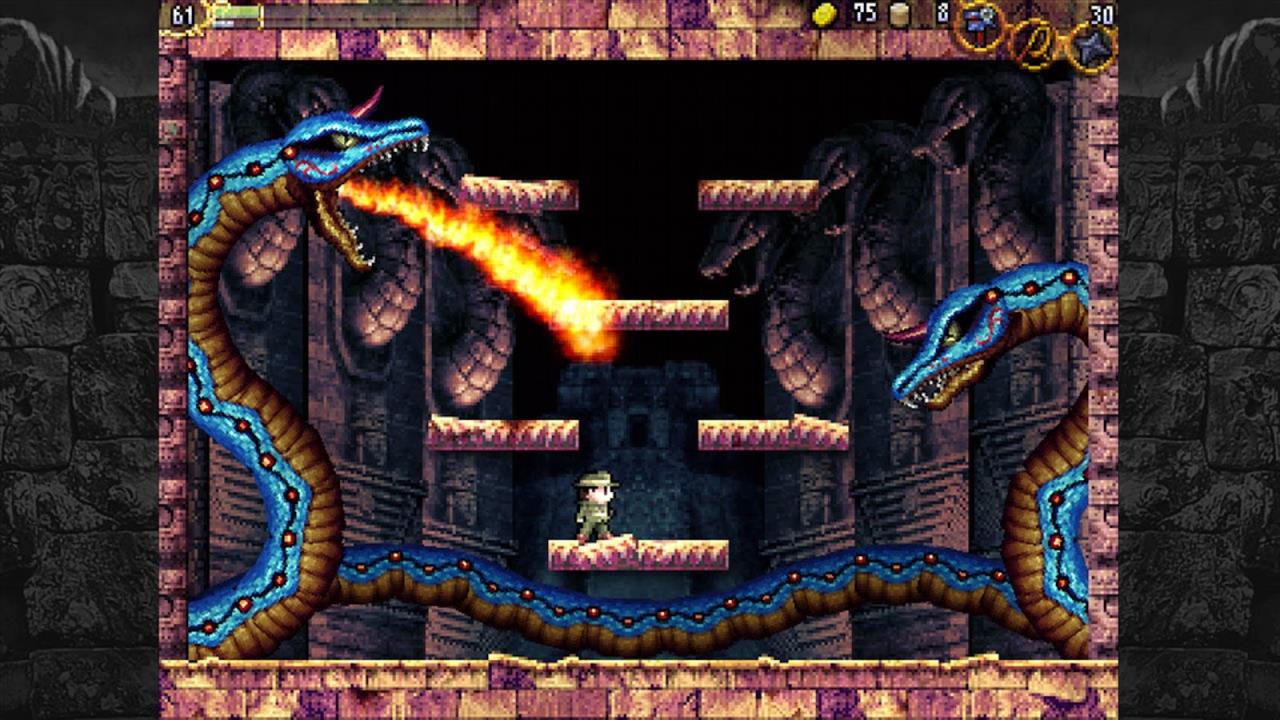 These days it's trendy to release 2D side-scrollers influenced by the hits of 25 years ago. Forget pushing the graphics to the limit, some of the newest generation's best games have been throwbacks to a simpler time. But that wasn't the case in 2005, when Takumi Naramura released a PC game inspired by MSX titles he played growing up. The result was La-Mulana, a devilishly difficult adventure that caught the eye of old school gamers and earned a cult following.

Six years later, the game was recreated for the Wii and PC, making it the rare remake of a faux-retro platformer. Although changes were made, the brand new version retained the spirit of the original and introduced a brand new audience to this perplexing adventure game. Now on the PS Vita, La-Mulana is finally available on the go.

While the obvious comparison would be Metroid or Castlevania, La-Mulana reminds me more of action/adventure games like The Legend of Zelda and Ys. As much as it's about exploration and discovery, it's rooted in history that embraces puzzle solving and dungeon crawling. This is a lengthy quest that sees players battling giant monsters and uncovering the lost treasures of La-Mulana.

Stop me if you've heard this one before: You play Lemeza, a whip-wielding hero modeled in the style of Indiana Jones. He has traveled a great distance to investigate the colossal Ruins of La-Mulana, which is said to be the beginning of all civilization and contain the Treasure of Life. But don't expect this to be an easy job, because our thrill-seeking hero quickly discovers that there are all kinds of ugly creatures hoping to cut his journey short.

Lemeza starts with little more than a whip and the ability to walk left and right. He can jump and avoid enemies, but he's hardly equipped for a quest of this magnitude. In true adventure game fashion, our hero will unearth new weapons and items that will make his life easier. For example, Lemeza will learn how to double jump and fast travel throughout the connected world.

Aside from what the town elders tell you, the player goes into this adventure with very little information. In fact, with the exception of a few hint boxes along the way, it's largely up to you to figure out where to go and what to do. Some parts of the game are locked away until Lemeza unearths the right item. At the same time, players can go a number of different directions right from the get-go. It's not always clear what you're supposed to be doing and how to advance what little story there is. In that sense, La-Mulana is what I imagine a 2D Dark Souls game would look like.

Early on, I was enamored by the non-linear approach to the storytelling and overwhelming world. However, I started to sour the closer I got to the end. This is a massive adventure that cannot be completed in a single afternoon. Just when you think the game is wrapping things up, they introduce a new wrinkle that adds several hours to the length. This is a game that overstays its welcome.

Part of the problem is the puzzle solving, which can be frustratingly obtuse at times. Some of the challenges make sense, but a few of them require players to search for invisible walls and other hidden locations. A few of the more random puzzles left a bad taste in my mouth, and it sometimes feels like the game is cheating. And because some of the solutions are so obscure, I suspect most players will eventually need to consult some sort of walkthrough guide.

It doesn't help that Lemeza is stiff and often difficult to control. His moves are very basic and he lacks the precision of many of his 8-bit counterparts. His unique feel is difficult when it comes to traversing the many platforming puzzles, especially when it comes to small walkways and ledges. And in true old school fashion, menacing enemies will make every platforming section a little more frustrating. 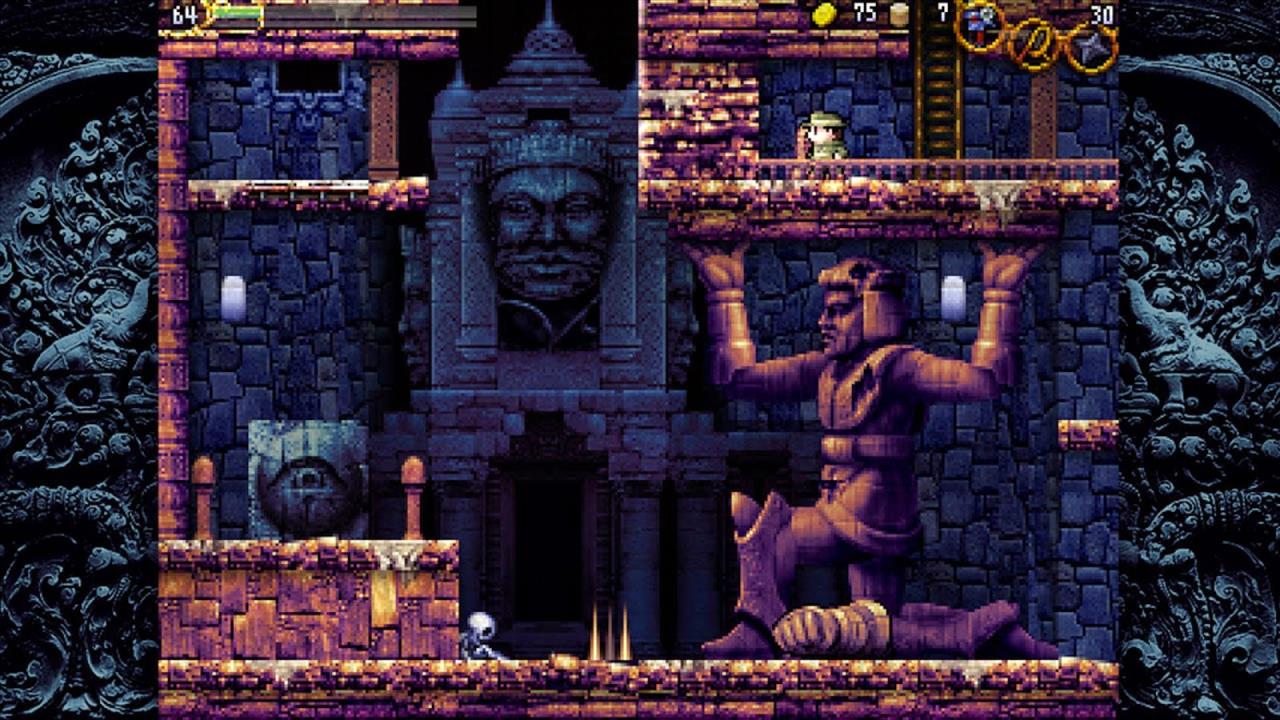 La-Mulana EX is not the kind of game for people who want their hand held through a linear adventure. The difficulty here is through the roof, to the point of feeling unfair at times. This is, of course, something that many retro gamers are looking for from their 2D adventure games. I love a challenge, but wish that this game was a little more focused. Some of the head-scratching puzzles felt nonsensical and there were a few bosses that made me want to throw my PS Vita into the ocean.

Visually, La-Mulana EX looks like the kind of 16-bit adventure game you used to see on the Super NES or Sega CD. Most of the characters are small, but the backgrounds are detailed and the bosses are huge. There were even a few sections that took me by surprise, including a 3D battle I didn't see coming. The presentation looks a bit like Spelunky, though that's where the similarities end.

La-Mulana EX is certainly not for everybody. Even fans of side-scrolling action/adventure games may be turned off the extreme difficulty and obtuse puzzles. It's the kind of game that is daring you to see it through. But warts and all, I found the game to be charming. It's for a very specific audience that is looking for something a bit meatier than the typical Metroidvania action game. I'm not sure how many of those people exist, but I'm happy this game was released.

La-Mulana EX is a frustratingly difficult action/adventure that mixes The Legend of Zelda with Castlevania. Unfortunately, many will be scared away by the obtuse puzzles and confusing level designs, but those that stick with it will discover a lengthy adventure that is full of hidden treasures.