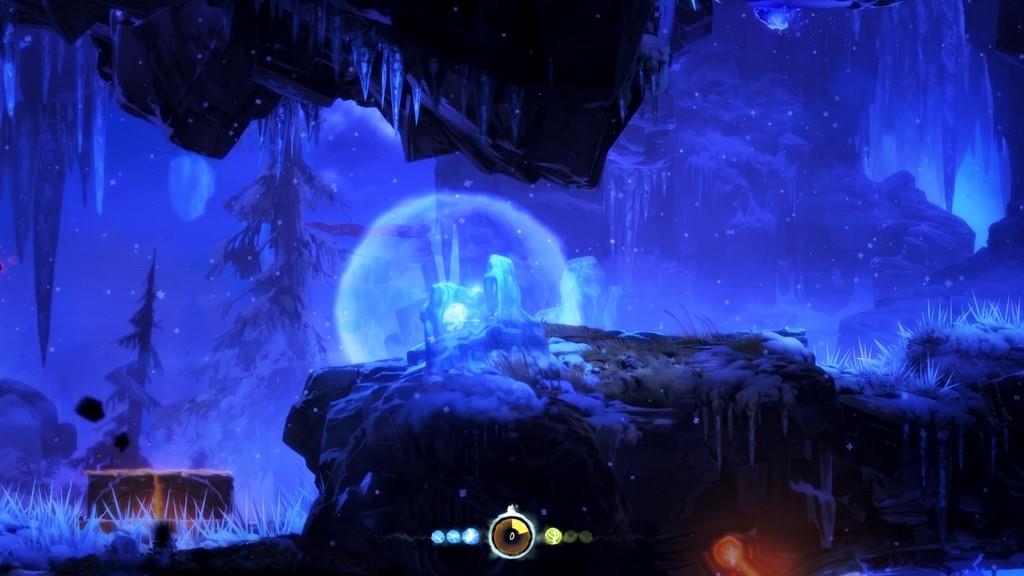 Ori and the Blind Forest

Platformers are not difficult to come by.  Good platformers, however, can be much more difficult to find.  From Super Mario Bros. to Sonic the Hedgehog, Mega Man to Kirby and everything in between, we're reaching the point where it's a challenge for developers to give us their own twist.  Ori and the Blind Forest has managed to capture what a gamer wants in not just a platformer, but in a total package.

Awaiting players is a gorgeous world that is supplemented by soothing music, but don't let the tranquility upon firing up this title fool you:  Ori and the Blind Forest is going to challenge you, though that will come after the absolute saddest opening to a game ever created, or at least close to it.  Without giving away any spoilers, the first ten minutes will give the player the story:  This gorgeous, magical forest is essentially dying from an unknown force.  Players will take control of Ori, a vibrant little creature who is bright white, quick to move, and has taken on the task of reviving the world that surrounds him.  The world, of course, has been created to the absolute finest detail.  Trees, leaves, water, backgrounds:  They will all come to life around Ori as players will guide him throughout the various areas.

The early stages of the game allow players to get a feel for Ori and how to control him as the quest begins.  The game takes on an RPG element in the form of experience points to level up Ori's powers.  Early on, experience and levels are fairly easy to come by, but the power upgrades aren't going to turn him into an unstoppable machine.  While collecting experience points, players need to be on the lookout for special orbs that will add to the total vitality, soul power, and experience.  These are rewards for releasing secret levers, finding hidden crevices, and so on.  Some of the power ups are going to be right out in the open, while others will have to be hunted down.  The game will also tease players by showing off these coveted power ups, yet not being able to get to them without advancing in the game.

Ori's powers are broken down into four sets that can be categorized the following way:  Attack, Support, Life/Spirit, and Powers.  The first three are what experience points go towards, and the experience can be used in any way, so long as the criteria is met (each power does have a pre-requisite that will be listed when selected).  Experience points are built up and burned as a combined amount, so instead of using, for example, 400 experience points, those points will make up one advancement point.  It will take a substantial amount of experience to unlock every power, which is why those hidden experience boosters will always come in handy.  The faster they're found, the more powerful Ori is immediately.  The fourth category, however, can only be advanced by pushing through the game.  Various small trees are scattered throughout the world, and they are blessed by various spirits that helped protect the forest.  Finding these trees will grant Ori useful powers such as double jumping, better attack moves, etc.  Again, these trees are much like the special orbs found throughout the game:  Some will be easily found, while others could be well protected or only accessible after picking up specific abilities. 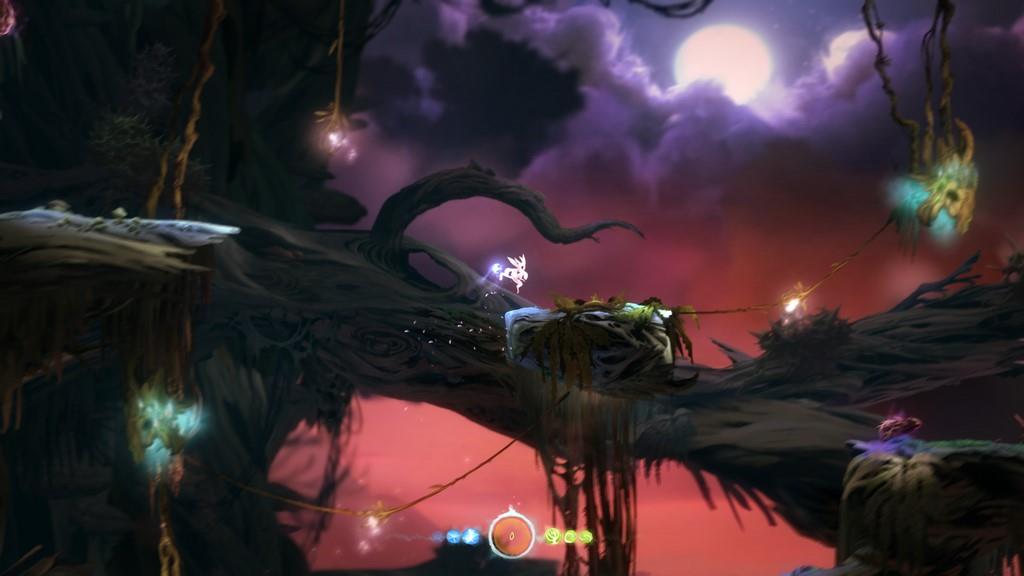 Gamers will appreciate the beautiful world created by Moon Studios, as well as a top-notch soundtrack that flows with each area.  A special piece of recognition must go out to the symphonic team who recorded the soundtrack at Ocean Way in Nashville, Tennessee.  They have truly created a memorable set of pieces, and it's a good thing too as Ori and the Blind Forest is going to frustrate players and the music may help them calm down.  Early on, the game is pretty straightforward with the areas to access and how to reach them.  As the game gets deeper, some of the jump puzzles and areas are flat out diabolical in nature.  To be more specific, in one of the first main boss levels, the game quickly makes a player realize that moving at their own pace is not an option anymore and quick reactions are the only way to survive.  This level cost me somewhere around 45 minutes in time and about 30 respawns.  I know this because the game actually reminds you in the pause menu just how many times you've killed poor Ori.  Full disclosure:  Through my entire playthrough, which was about ten hours, I killed Ori a total of 293 times.

I mentioned earlier that the game does steal some elements of RPGs with leveling, but it doesn't stop there.  Ori and the Blind Forest does use a save system that can be utilized in two ways.  The first way is the discovery of set save points.  These save points can be used to replenish both vitality and spirit points.  Vitality, obviously, is what keeps Ori from exploding in a flash of magical dust.  Spirit, however, is used to either dish out charged attacks or to create your own save point and to access the leveling screen.  It is absolutely vital to use spirit to save whenever you get the chance because this will also be the determining factor as to where Ori respawns after a death.  Also, when Ori has to respawn (it's going to happen a lot, if my death total gives you any idea), he will lose all progress made in between his death and the last save point, so it isn't just a free respawn and getting to keep everything found.  This game's job is to punish you for forgetting to save, and with the increasing difficulty of the title, forgetting save could mean losing valuable experience and found items.  Spirit can be replenished by killing enemies and finding orbs, or by going to one of the preset save points.  The ones Ori creates, however, have to be used to level up, so don't think you can horde the spirit solely for attacks. 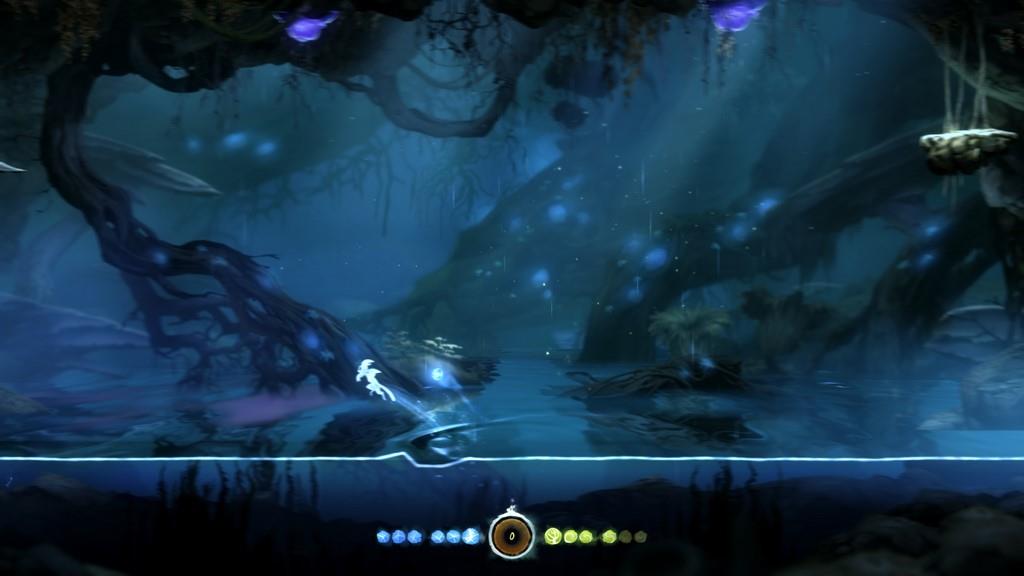 There are few issues with Ori and the Blind Forest, but the obvious one is that the game isn't very long.  As stated previously, I was able to finish the game in roughly ten hours, though I could see it taking as much as 15 hours depending on how some of the puzzles and stages are handled by players of various skill levels.  Truthfully, the length is quite fine and for those who are aiming for 100% completion, the map menu will provide that information, but be warned:  Some areas are only accessible once.  Once it's locked out, it's locked.  The pause menu will also show how many of the special orbs are out there to be claimed to help with that 100% goal.  Another possible negative, though I truly don't see this that way, is that the difficulty level can cause frustration in players who may not be looking for that insane challenge.  The later levels are not fun the first time or two through, so be prepared.  Outside of these factors, I did experience a couple of issues at the title screen with the game not loading up.  Rebooting my Xbox One was the fix for this, but it's a little upsetting that a bug like that exists upon launch.

Wrapping it all up, Ori and the Blind Forest is going to be a contender at year's end for awards, whether it be Platformer of the Year or Indie Title of the Year.  It's truly that good.  The story is simple, yet somewhat gut-wrenching in that it will hit you right in the feels as the ominous narrator explains what happens along the way.  I wouldn't have minded a little longer game, but considering the package that has been presented to me, Moon Studios deserves a round of applause as the game is a beautiful, vibrant title filled with challenges.

With a gorgeous world, beautiful music in the background, and a surprisingly difficult challenge, Ori and the Blind Forest will take gamers on a journey that will test their reactions and wits, yet make them appreciate just what a beautiful game has been created for them.