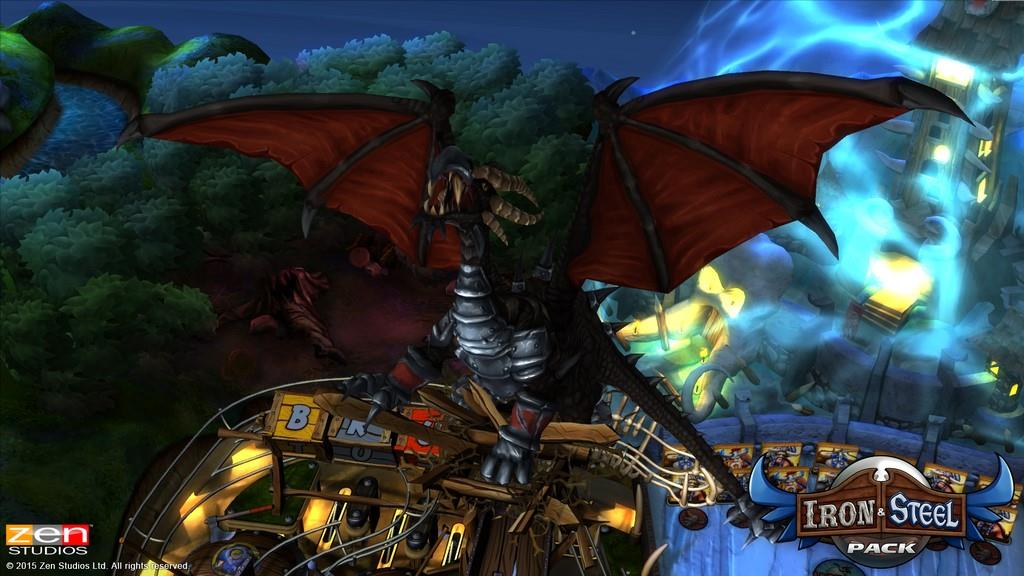 Pinball, nowadays, may seem like some quaint throwback to the 1980s, but its origins go all the way back to 1700’s Western Europe. These newfangled video games are cute and all, but pinball has been around longer than the United States has even been a country.

In 2007, however, Zen Studios launched Zen Pinball, which continued the respectable tradition of merging these parallel universes—pinball machines and video game consoles—into singular entities. In this timeline, pinball machines are lifted from the European parlors and American arcades of yesterday and placed on the new ultra HD 4K TVs of today.

Since the sequel, Zen Pinball 2, launched in 2012, it’s been steeped in licensed products: Marvel and Star Wars make up more than half of the playable tables. Which isn’t a bad thing. According to our own Jeremy Duff, Zen Studios has pretty much never made a bad table. In addition to properties about superheroes and lightsabers, however, Zen Pinball 2’s Plants vs. Zombies, The Walking Dead, and South Park tables are some of the highest-rated games we’ve reviewed here at Gaming Nexus.

Which brings us to the Zen Pinball 2: Iron & Steel Pack. This pack comes with two tables—the first original tables Zen Studios has made in three years. The first, Wild West Rampage, hits up a wonderful array Western movie stereotypes, from riding in on an iron horse to taking out a town’s shady sheriff. The second table is based on Zen Studios’s own side-scrolling tower defense, CastleStorm. Here you bring cartoonish siege weaponry to bear on horn-helmeted Viking raiders.

When it comes to storytelling, Wild West Rampage is a blast from a stick of dynamite. A bounty hunter rides into the small, dusty town of Rackton Point. The bounty hunter goes by the name of Cindy, “just Cindy,” and learns that Rackton Point’s biggest problems aren’t nailed up on wanted posters; its biggest problem is the sheriff. He’s a man living above the law, with morals in low places, a grizzly, villainous laugh, and zero tolerance for anybody with the intention of edging in on his turf in order to clean up the place. 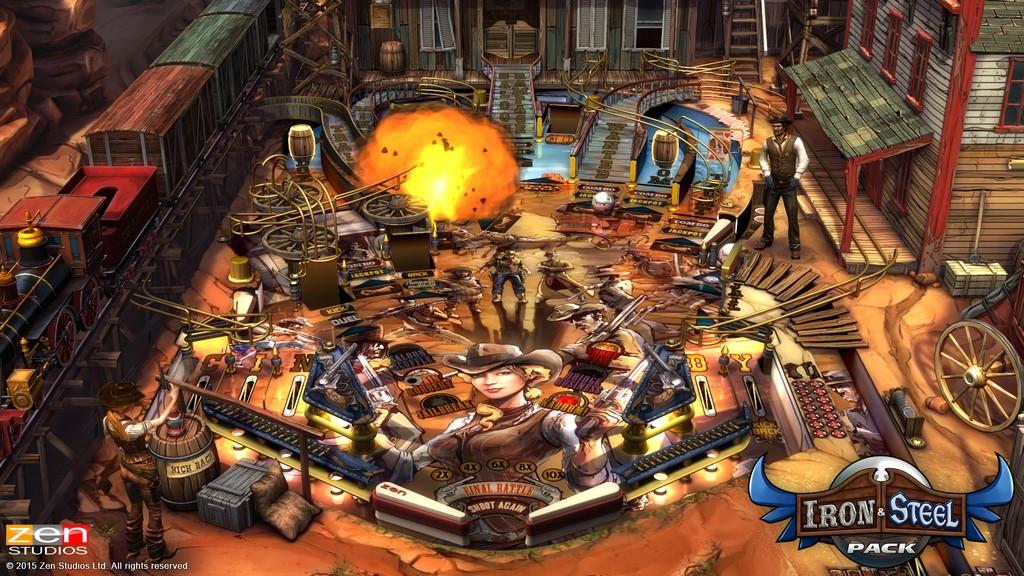 On Wild West Rampage, the plunger (the thing you use to fire the ball up the shooter lane) is a steam engine with a pressure gauge; it shoots the ball across the table, right up a ramp to the train parked on the left side, or, with the right amount of drawback, lets the ball ride the ramp back down into jail for a high-scoring start. The lower bumpers, just above the basic flippers at the bottom, have spinning six shooters. A trio of wagon-wheel bumpers rack up points just above a third flipper on the left. It’s a fast-moving table, and there’s hardly a dud shot to be found anywhere. Everything feels great. For that reason, it’s one of Zen Pinball 2’s easiest tables to pick up and play. Plus, it’s a blast every time to shoot the ball into the sheriff-badge spinner and have the ball come crashing out of a second-story window on the other side of the table.

The table’s centerpiece is the saloon, which is a straight, hard shot right up the middle. There are several rails for the ball to ride back down, and the upper half of the table is swarming with big, swooping lanes. Two or three good hits into these rows will have the ball pick up a lot of speed. Those lanes are all well-placed, and shooting into them feels like the pinball equivalent of a good headshot.

Cindy “Just Cindy” has a few entertaining quips to throw out there. Sometimes she says, “I always get my bounty. Unless I don’t.” And when the ball sits on the plunger and she says, “I never get tired of this,” I’d swear she’s the same voice actress that plays Bluesy St. John in Grand Theft Auto IV (she’s not). 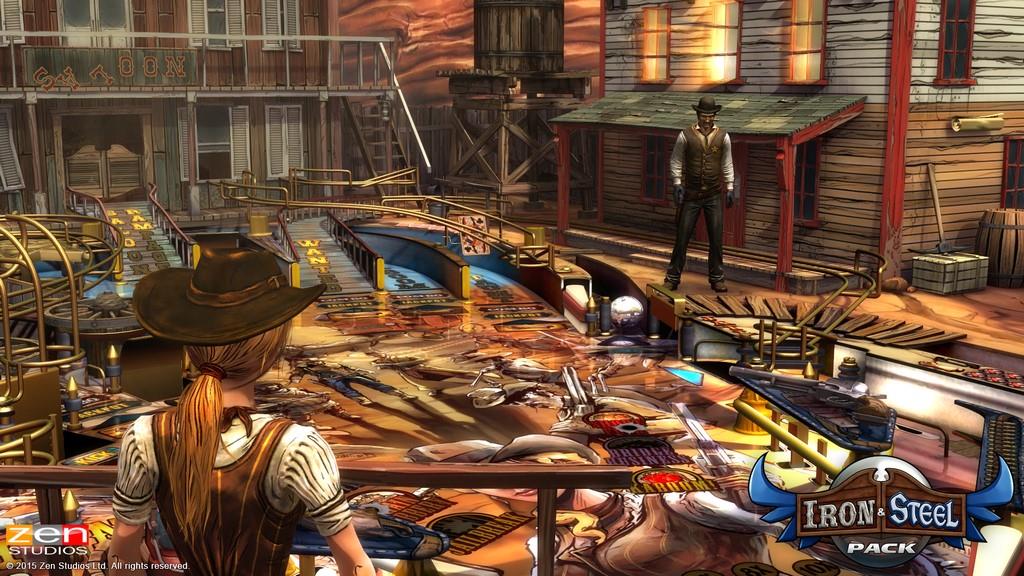 Wild West Rampage isn’t Red Dead Pinball, but it’s still a ripping, pulpy Western tale with grainy guitar riffs and bandoliers aplenty. There’s even a fistfight or two (though I haven’t won any of those), not to mention nighttime jailbreaks and slow-motion thrown dynamite duels (which I can’t seem to win either). Getting a multiball scenario going is rare, but that’s fine with me, since having two or three balls on the table at once is a recipe for stress.

Everything is wonderfully illustrated with sharpshooters and ne’er-do-wells casting long shadows across the table. Despite the dusty palette, the table is bright, which often makes it hard to see where my special lit-up targets are. For instance, excellent audio cues clue me into the fact that a mission is starting, but knowing what I have to shoot to beat the mission isn’t always apparent.

The basic components of Wild West Rampage are forgiving. It’s almost impossible to drop the ball right in the gutter down the middle. The bottom flippers are set close enough together that you always have a shot. And this is the only table I’ve ever gotten the ball to bounce out of the outside gutters with a tilt.

The CastleStorm table (the other half of this Iron & Steel two-pack), plays differently. Instead of Wild West Rampage’s long-sweeping lanes and rails, CastleStorm has tougher, shorter, punchier shots. You have to be prepared for shots to bounce right back in your face. It’s hard to appreciate the change in playstyle at first. But after you’re done with the relative ease of Wild West Rampage, then CastleStorm will be waiting for you with tougher, satisfying shots to pull off. Wild West Rampage is more like an on-rails shooter, whereas CastleStorm is more of a boxing match. 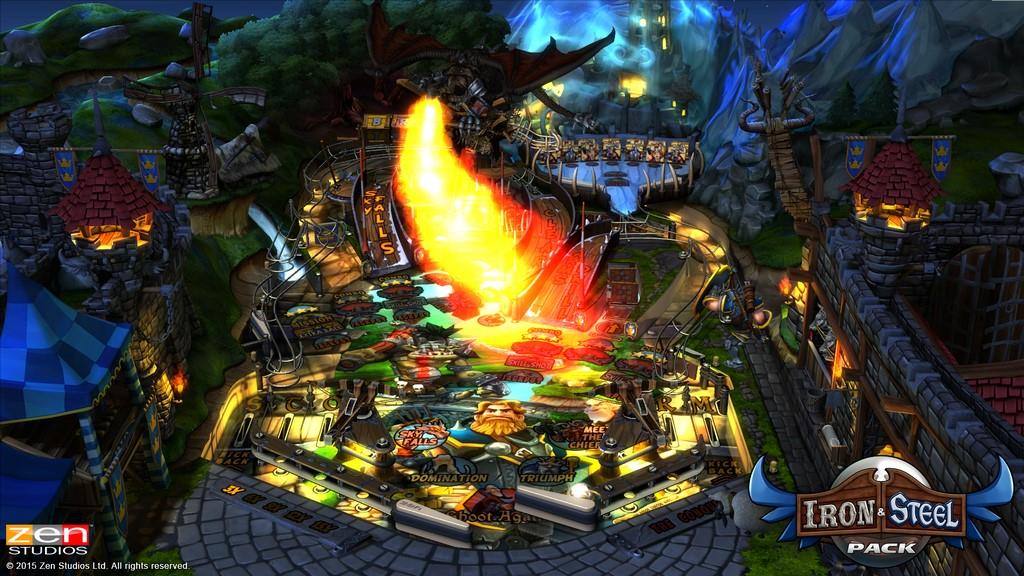 The centerpiece is a giant black dragon perched at the back of the table. Sometimes he flies away. Sometimes he returns. Sometimes he starts blowing fire across the top half of the board. He’s more dangerous as a distraction than anything else. It can be hard to keep your eye on the ball when orange flames brighten up a hot arc across the table.

CastleStorm’s plunger is a mystery. Instead of having any kind of measurable gauge, the plunger is a donkey munching on some hay. It sort of lays its ears back and crouches down on its haunches before doing a back kick and launching the ball up the shooter lane. Sometimes it completely whiffs the shot and kicks up nothing but dust. Sometimes it does a half-hearted kick that should’ve nailed it. Either way, its novelty isn’t worth its ambiguity. 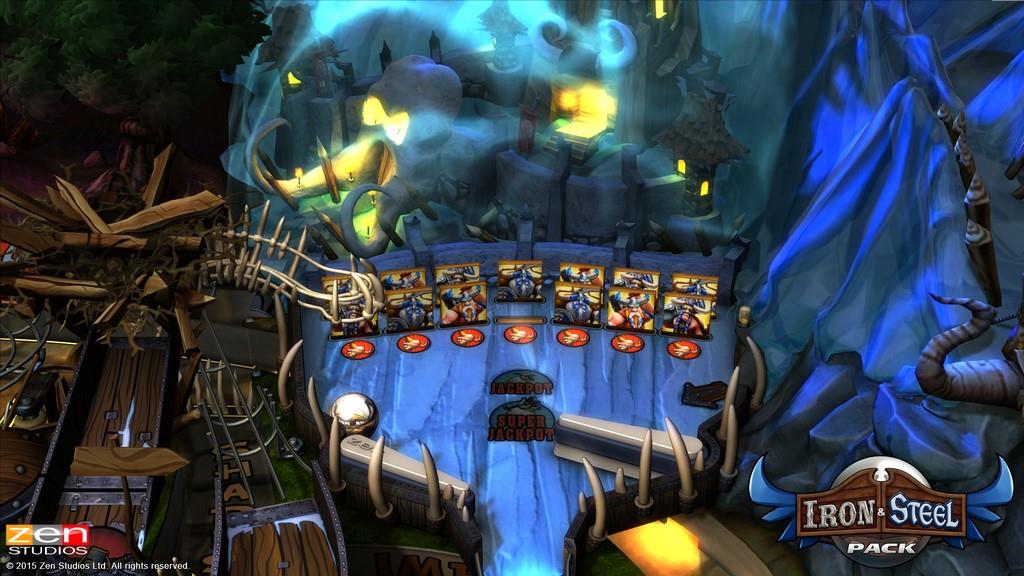 Some of Zen Pinball 2’s tables have a side game on a separate screen (i.e. the base table disappears and you find yourself playing on some other disconnected side table). These separate side tables are usually disconcerting, intentionally short, and strangely dissatisfying. CastleStorm’s side game, however, exists on the same table as the main game. You can see it the entire time in the upper right-hand corner of the table. This side game has the ability to be jumpy and short-lived, too, but at least your transitions in and out of the side game table—with two flippers that operate independently of the regular table—are far more seamless. It’s a tight, short-sighted game of beating down rows of Vikings in order to pound away at the enemy’s walls. Sometimes the ball will seemingly twitch and drop right down the middle lane and quickly land back in the regular game. Other times you can button mash your way against the enemy’s walls and rack upwards of half a million points.

It’s also great when a slowly advancing Viking front starts marching down the table towards your home stretch. It’s one of the few skill shots I can pull off, taking out waves of spear-wielding, mustachioed Norsemen advancing on me like Space Invaders.

If it wasn’t apparent, I finally had a good run on CastleStorm. Until then, it wasn’t an enjoyable board. The side game was fruitless. The dull, rubbery thud of missed ramp shots was endless. It felt like multiple dud shots would aim the ball right down my crotch in the middle.

Then everything started to click. Missions opened up. Balls caught fire. Storms raged. Walls crumbled. Vikings were bowled over. Maidens sang of my heroics. And I was finally able to keep the multiballs up on the table.

Be patient with CastleStorm. It’ll feel like you’re beating your head against the wall, but it slowly pays off. Have a blast with Wild West Rampage. It’s fun and free wheeling, but hard to do anything meaningful during missions. The Wild West Rampage and CastleStorm tables in this Iron & Steel Pack complement each other nicely. Just when you're getting tired of one, the other will strike your fancy. Just when you've got that one figured out, you'll have an epiphany about the other table.

Both tables in the Iron & Steel Pack, at first glance, fall back on overly generic themes, but Wild West Rampage tells the more interesting story with its genre's tropes, but CastleStorm makes you earn its love. Either way. I'd tilt that.