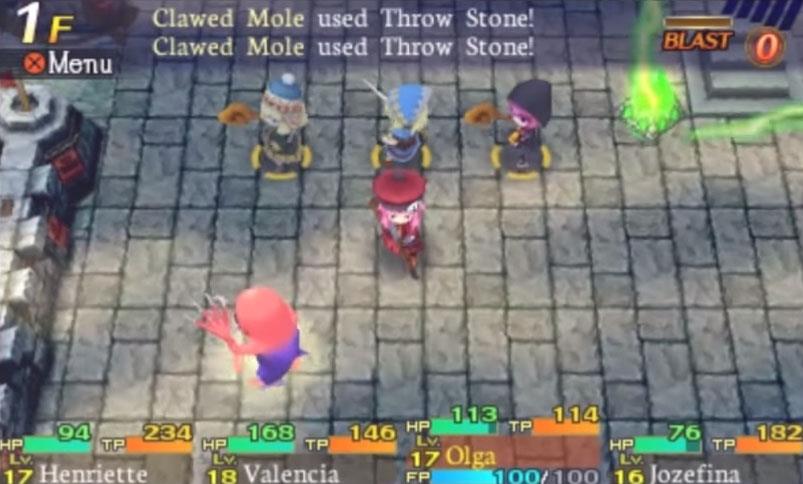 Written by Matt Mirkovich on 4/27/2015 for 3DS
More On: Etrian Mystery Dungeon

Atlus what have you done? Letting those maniacs at Spike Chunsoft combine their mysterious dungeons with a notoriously by-the-books franchise like Etrian Odyssey means that gamers are going to get a game that is nothing like what they are used to with this series. And you know what, Etrian Mystery Dungeon is a great diversion from the first person dungeon slogs that we’re all used to, especially when it proves that changing just a few key elements makes a game feel fresh and new, but at the same time retains the charm and fun you’ve come to expect. Although to be honest at first when I saw that Spike Chunsoft logo I was expecting some kind of 999 or Virtue’s Last Reward twist that never materialized and that’s really the biggest disappointment this game has going for it.

So what is Etrian Mystery Dungeon? Well like its predecessors, it is venturing into the unknown, as a guild of adventurers, you’re tasked with the protection and fortification of the town of Aslarga. This means picking up a bunch of quests and odd jobs along with helping out the town provost and other adventurers. These quests will take you in the various dungeons that are always changing in their layout. Unlike other Etrian games where the map is your best friend, Mystery Dungeon is always just that. Along with randomly generated dungeons you’ve got rogue-like gameplay, which means you’re always a death away from a crippling blow to your party finances and items. Thankfully it’s not the super punishing type of rogue-likes that also takes your levels or progress when you drop, but the biggest difference here is how unreliable a map can be. That’s not to say that the map is useless, it still has plenty of utility from floor to floor, as you’ll be able to see where entrances and exits are located, which is key since you have to keep an eye on your FP meter because once that empties, your adventure this time around will come to an end. The map also points out enemy and loot locations as you explore, although in Etrian Mystery Dungeon, sometimes the loot can be just as dangerous as the enemies. 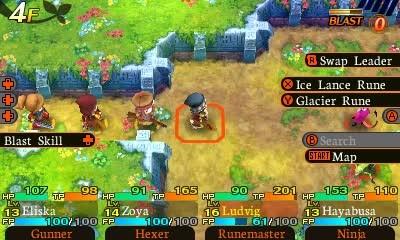 Your party is made up of classes you’ve seen in previous Etrian Odyssey games, this means you’ll get the warrior-esque Landsknecht, Gunners, Healers, Dancers, Hexers, Protectors, and more adventurers that you can pick up out in the wild. Your party is a constantly evolving mix of these classes, and you can only take four down at a time, so you’ll have to be pretty choose-y. Once you’ve got your party set, its down into the dungeon. Every step you take in the dungeon counts as a turn, which means that as you move, so do enemies. Battles take place in real time as you control one character to make moves with. The computer controlled characters are fairly smart and each of their classes makes appropriate moves behind the party leader that you control, however if you want a more granular experience you can control every party members actions. The combat isn’t much different from your normal turn based affair, and you have special skills that can be used in battle to your advantage, like have a Protector class use Provoke to lure enemies toward it, while the Gunner takes shots or the Hexer puts a debuff on it. This all makes sense early on when you’re facing one enemy at a time, but as you progress the dungeons will become more dense with enemies, making strategy just as important as knowing when to cut your losses and abandon the dungeon, which is thankfully not much of a hassle, provided you’re carrying the Ariadne Threads that will help you escape.

Leveling up your characters follows the same formula as other Etrian Odyssey games. As you level up you’ll earn skill points which can be slotted in to each character’s skill trees which in turn can give you a pretty specific build for each class that fits your needs. Want a Protector to be a walking tank and forsake damage for the ability to withstand enemy attacks? That’s perfectly doable, although I would recommend a more balanced path just for the sake of utility, you never know when those bind skills are going to come in handy. And before you worry about whether or not you need to consistently have a certain class in your party to level up, know that you can level up non-party members with relative ease by placing them in forts to hold down specific floors of dungeons against enemies. This will allow them to slowly level up so that they are never too far behind your main party. 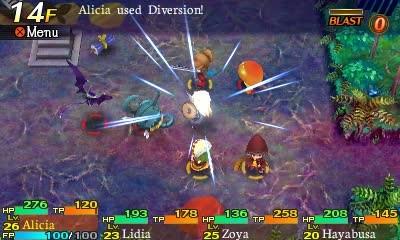 Etrian Mystery Dungeon maintains the aesthetic feel of other Etrian Odyssey games, which means you’ll be seeing a lot of enemies you are used to if you’ve played previous games in the series. The characters have been slightly redesigned but you’re going to been feeling really familiar with the game right at the outset. The music continues to be excellent, and gently eases you into the adventure before becoming something a little more epic. As per usual the localization is spot on, which really has always been one of Atlus’ strong suits.

If you’ve been a little burned out on the Etrian Odyssey formula, whether it be because of the number of games out there, or from the recent crossover, Persona Q, Etrian Mystery Dungeon just might be the type of game to rekindle your love for the franchise. It has the same feel as an Etrian Odyssey game, but it doesn’t feel like it is nearly as grind heavy as the other games. The 3DS has no shortage of good RPG games, but Mystery Dungeon is a stand out game that you would do well to pick up.

Etrian Mystery Dungeon continues the streak of great Etrian titles. The shake-up in gameplay doesn't rattle the game too much for die-hard fans and will give them exactly what they want, while giving people unfamiliar with the franchise, a good entry level introduction.