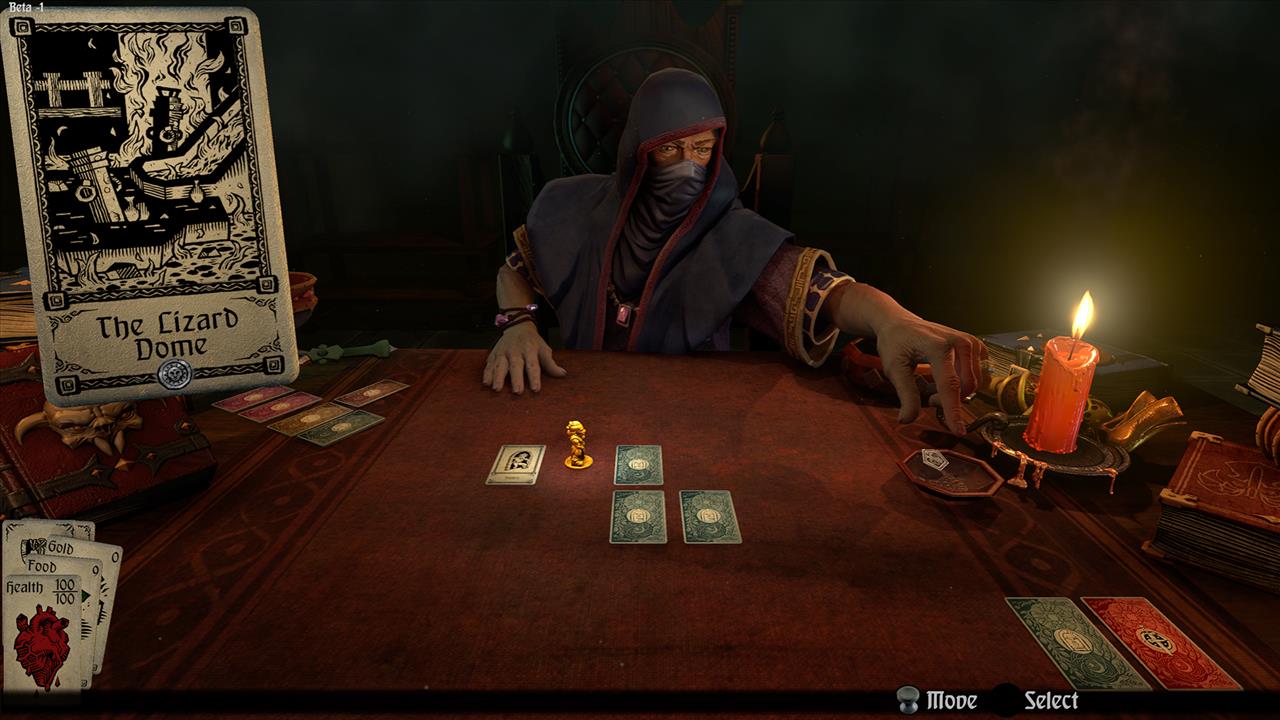 Chances are you've never heard of Defiant Development. Based out of Brisbane, this small team of industry veterans has been sharpening its teeth on quirky downloadable titles for smartphones. Now they are making their home console debut with Hand of Fate, a devastatingly addictive adventure game that mixes card collecting with fast-paced third-person action. The result is a clever mash-up that defies genre classification and proves that Defiant is a company worth keeping an eye on.

At its core, Hand of Fate is a single-player board game. Each of the 12 stages play out across mostly linear paths made out of cards. Each space you step on uncovers some sort of action, be it talking to a drunkard at the tavern or getting ambushed by enemies. The idea is to travel around the board until you eventually find the hideous boss creature.

Of course, it's not as simple as walking from one space to the next. Many cards will require a fight, which sends us into a third-person skirmish set in small fantasy-themed arenas. Influenced by the combat in Batman's Arkham series, Hand of Fate is heavy on button mashing and quick counters. Our hero can swing his weapon, stun enemies, reverse attacks and leap out of the way. What's more, many weapons have a secondary attack, which can help flip a losing fight back in your favor.

Players start out with the most basic equipment, but will find better weapons and armor through completing side quests and opening treasure chests. Sometimes you'll discover a sword in a canyon or be given better items by a friendly stranger. And because each stage is randomized, you never know how each adventure is going to play out.

In case I haven't made it clear enough, everything is governed by your deck of cards. Players create their hand based on what they've collected along the way. This is then added to the dealer's hand to create a rich adventure that is unique every time. Although it's a little confusing at first, the cloaked narrator does a good job of walking us through the finer details every step of the way.

With so many disparate ideas being crammed together, Hand of Fate could have easily become an unintelligible mess. Even as somebody who has spent a dozen hours collecting cards and understanding the finer details, I am clueless how to explain the mechanics in a way that won't make your eyes glaze over. And yet, I never felt overwhelmed or confused while playing.

While it's easy to focus on the combat, a lot of the cards are more complicated than simply engaging in a fight. Many of the spaces will give the player a choice on how to proceed, not unlike the classic text adventures of the 1980s. For example, our hero will occasionally run into a giant bird that snatches him up and flies around. He can choose to fight back, or simply wait for the bird to get tired. In other cases you'll be able to pay the enemies to leave you alone and even take on secondary missions. There's a lot of variety throughout the game's 12 stages. 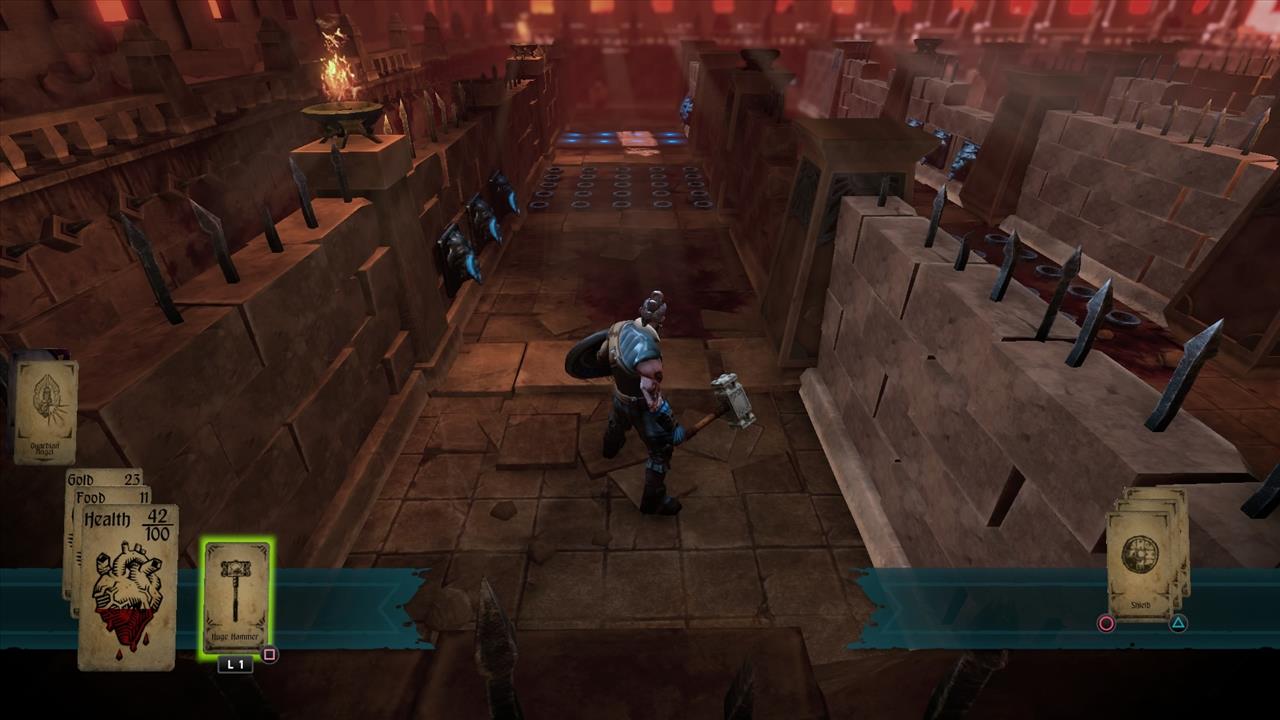 For those times when you are locked in battle, the combat arenas are large and teaming with details. They are based on different locations so popular to fantasy role-playing games. The fights will take you to such familiar locales as a cave, the forest, the desert and a demonic altar. And since this is in the style of a board game, there's never any continuity between themes and locations.

Sometimes the game's roguelike elements can get in the way. For one thing, dying means you have to start the entire stage over from the beginning, no matter how much time you've put into it. While hardly the first game to pull this trick, it feels especially egregious here. It's too easy to get killed by the final boss and have to spend another half hour battling through the stage again. Even if it means taking a penalty, Hand of Fate should give players a chance to continue.

I was also disappointed by some of the technical issues that plagued nearly every section of this game. Putting it kindly, the animation is inconsistent. Thankfully it doesn't impact the gameplay much, but there are moments when everything slows down to single frames. On a similar note, the game crashed on me several times. Perhaps anticipating this, the developers added generous checkpointing. 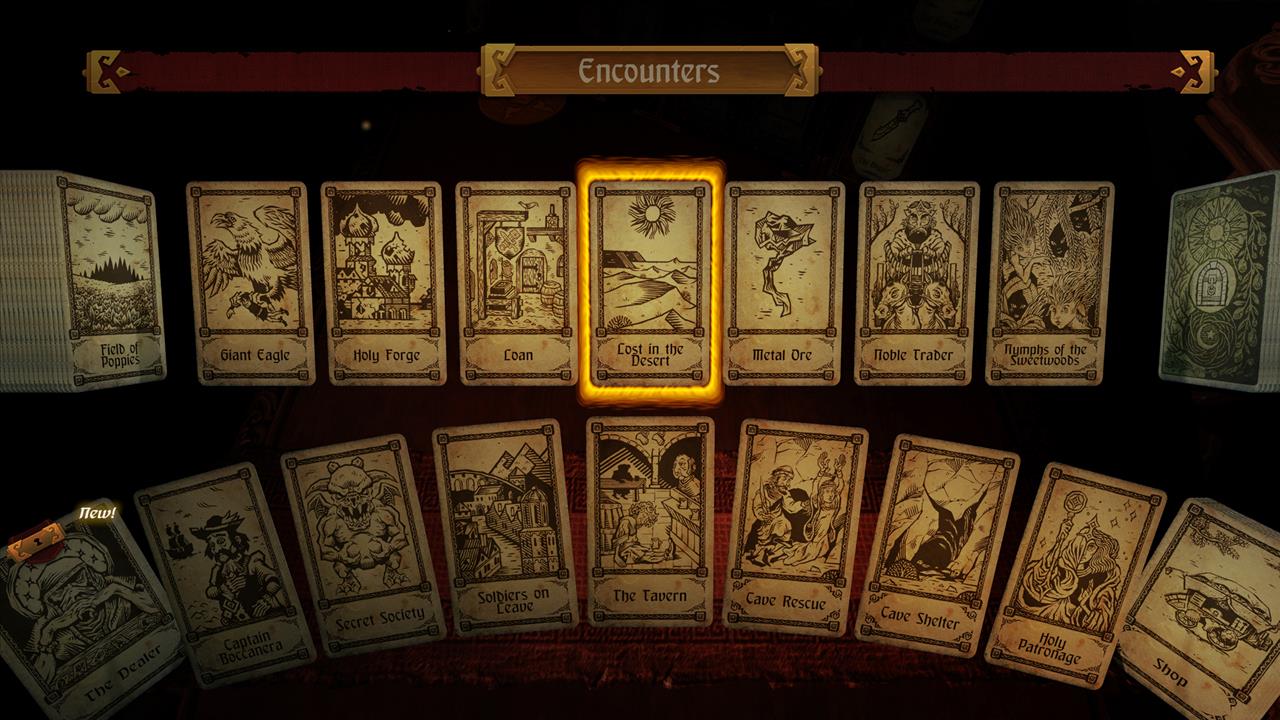 And while not a big deal, I wish there was a little more variety to the enemies you fight throughout the game. Even though you'll battle skeletons, large rodents and magicians, it still felt like I was seeing the same few bad guys over and over. It would have been nice if Hand of Fate built up a bit more as you neared the final stage.

Beyond a few minor gripes, this is an incredible first foray into the home console market. Hand of Fate is an addictive game that brings familiar ideas together to create something truly unique. It's a good looking action game that is as accessible as it is clever. I can only hope that this leads to a bigger, more ambitious sequel.

Hand of Fate is a devastatingly addictive adventure game that mixes card collecting with fast-paced third-person action and board games. Although full of disparate ideas, the game is never confusing. It has a few technical issues and I would have preferred a way to continue, but none of that should keep you from experiencing Hand of Fate.