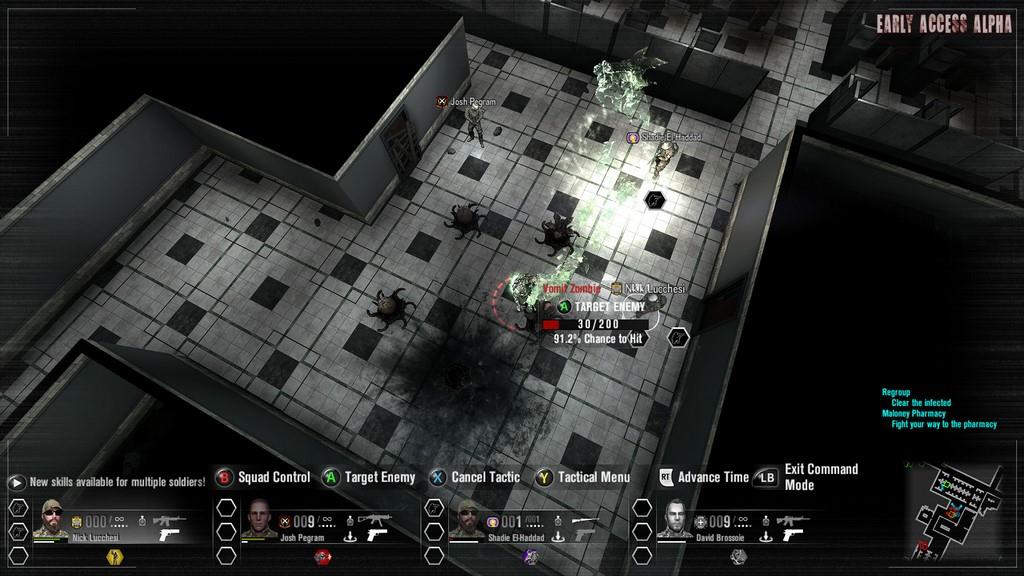 The bane of most tactical combat games is how a long, hard-fought battle can sputter out into a turn-cycle slog when there's just one last enemy or objective remaining and the flow of the mission has taken you to the far side of the map. You have a half dozen units still standing, and to take out that last pawn four turns away you've got to power through the selection and confirmation of 24 actions to land a final blow. This monotony isn't a game breaker, but it can be annoying. Breach & Clear: Deadline has solved that little annoyance and laid it to rest.

I've not played the original Breach & Clear on which this sequel is based, but I've seen it described as a mix between XCOM and Frozen Synapse. Based on what I've experienced in Deadline, I can get behind these references. Breach & Clear: Deadline is a game that blends the squad based movements and special abilities of XCOM but foregoes the turn based process for the real time execution and scan and sweep movements of Frozen Synapse. But what it adds is a little twin-stick-type action in between tactical encounters. While all the bits and pieces of a tactical strategy game are there, at the press of a button time un-freezes, allowing you (and the zombie horde) free reign in real time to run, shoot, lob ordinance—whatever you want. So in Breach & Clear: Deadline, if you need to clear that last zombie at the far end of the combat zone to get past the checkpoint, un-freeze the tactical loadout and run your unit over to the location with the control stick, then either jump back into tactical combat or use the dual control sticks to position yourself and direct your aim and a combination of two triggers to raise and fire your weapon. Zed's dead baby. Zed's dead.

You may have picked up by now on a few things. First of all, yes, it takes four simultaneous button presses to fire a weapon outside of the tactical environment (two control sticks and two triggers). And yes, this game is designed to be played with a game controller. There is a keyboard and mouse option available, but I wouldn't even bother with it. The controller feels natural, the movement in and out of tactical and free roam is seamless, and the buttons are mapped well enough that I never even felt I needed anything more. Additionally, Xbox 360, Xbox One, and even PlayStation controllers are supported with the correct button mapping and on-screen instructions. I've been playing PC games with a PS3 controller long enough that translating the Xbox to PS3 buttons has become a bit second nature, but this little feature was still very welcome.

So how does it play? I found it quite enjoyable, when it was working. The game is still in Early Access and, to be honest, it's still a ways form being ready for primetime. There were some minor annoyances. My units would sometimes get stuck behind an obstacle like a stack of tires and could not navigate the three feet to their right or left to free themselves from such witchcraft. Sometimes when entering a new area, the lighting wouldn't take effect and I would have to stumble around in the darkness back to the door to give it another go. But there are also some game-breakinig bugs at this point. The compass to the next objective rarely worked. It would get stuck in one direction or spin around pointing to nowhere. This was confounded by the issue that the button to bring up the map didn't work either. It was only through extensive free roam and exploration that I could find anything. Objective materials wouldn't spawn or would spawn in inaccessible areas forcing a restart. The edges of the map at one point weren't very well defined and I managed to fall off into limbo. All types of things that you should be prepared for with early access, and that the developers should iron out before they go live. 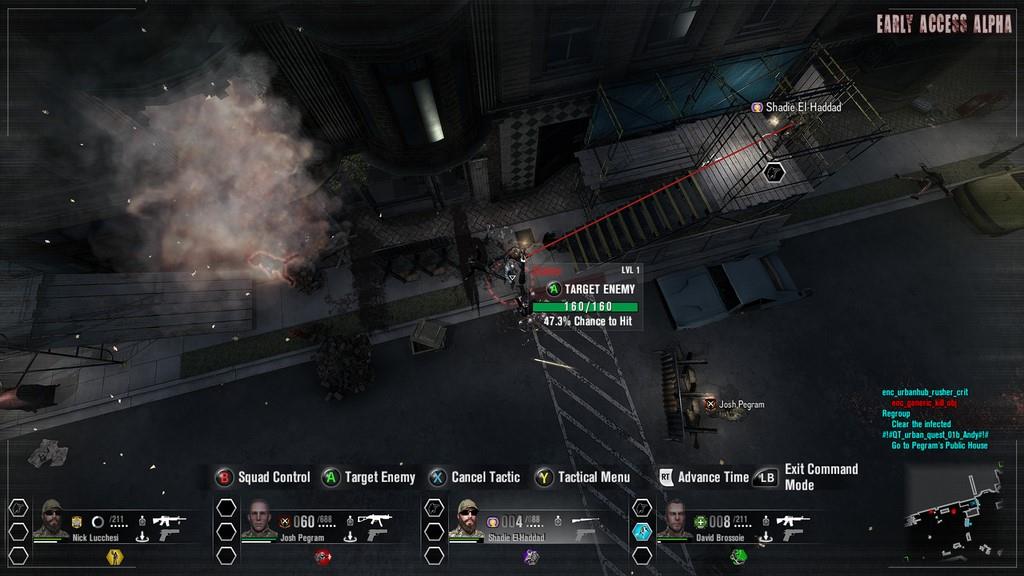 Once you get beyond that, there is a very fun game taking shape. The free-roaming ability to twin-stick shoot your way from point to point and through zombie hordes is good fun. It reminds me a lot of Dead Nation from my PS3 days, but it's nowhere near as frantic. There's still a tactical strategy game going on here. You still must watch your bullet count and your back. The companion A.I. of the rest of your four-person team leaves a lot to be desired. Whether this is a design decision to make the game more difficult, or something the devs will smooth out, remains to be seen. We've already discussed your units' difficulties with stacks of tires, but they also suffer from the worst case of tunnel vision—unless a zombie is directly in front of their field of view, and often, even then, until you open fire first, they will usually stand idle until bitten.

"Zombies to my right, zombies to my left, and zombies breathing down the back of my neck. I'm good, Sarge. Just give me the order and I'll start shooting." - Your Squad A.I.

Running and gunning from point A to B, taking out small swarms of zombies along the way, works exceedingly well. There is a temptation to carry this over into a bigger fight, too. But that's when you come crashing back down to earth and remember you're still in a tactical strategy game. Trying to take on a better class of enemy (like a group of armed raiders) with run-and-gun tactics will get your squad torn to shreds. So while the option exists to go free roam, and the execution is a lot of fun, this is not a twin-stick shooter at heart; it just uses those elements excellently to move the team and the game along. 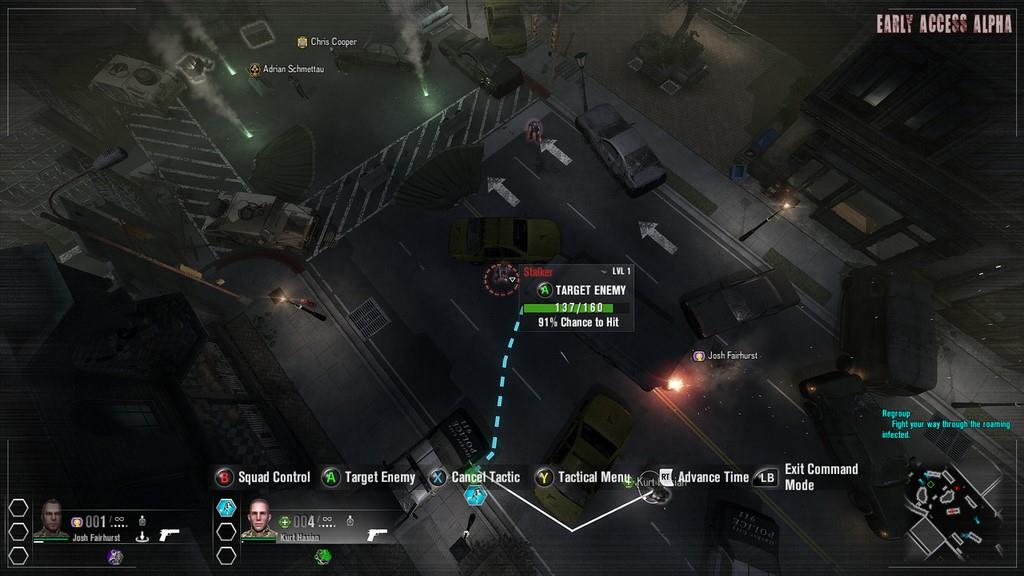 Underneath the hood are all the other trappings of a strategy game. Your units have special abilities, they use XP to get skill points to unlock new or better ones. Weapons can be leveled up with scrap. They also degrade over time. Ammunition is ample but there is a supply. Run and gun too long with a heavy machine gun and you'll soon be wishing you hadn't scrapped that other rifle when you run out of of heavy ammo and are sitting on 9,000 bullets for the M4. In tactical combat, time stops and you can issue orders to move quickly, sweep and move, mark targets, etc. Press the right trigger and time advances. If you're halfway through a movement and realize things are going south, let go of that trigger and reissue commands to change up the tactics. You're not committed to a course of action once you set it in motion.

I'm not going to go much into the plot at this point because it seems pretty loosely formed and I'm curious if it will be better developed in the full release. Besides, we gotta save a little for the actual review. The music and visuals do the job, though the setup of the map is a bit visually repetitive. I think it best to reserve any final judgement on these areas until the full game is released.

This is shaping up to be a very good tactical strategy game that actually allows a player to roam an open world, and makes it fun to do so. It moves from action sequence to action sequence without the slog that drags down a lot of similar games. It is still Early Access and is far from a finished product, but the future is bright.