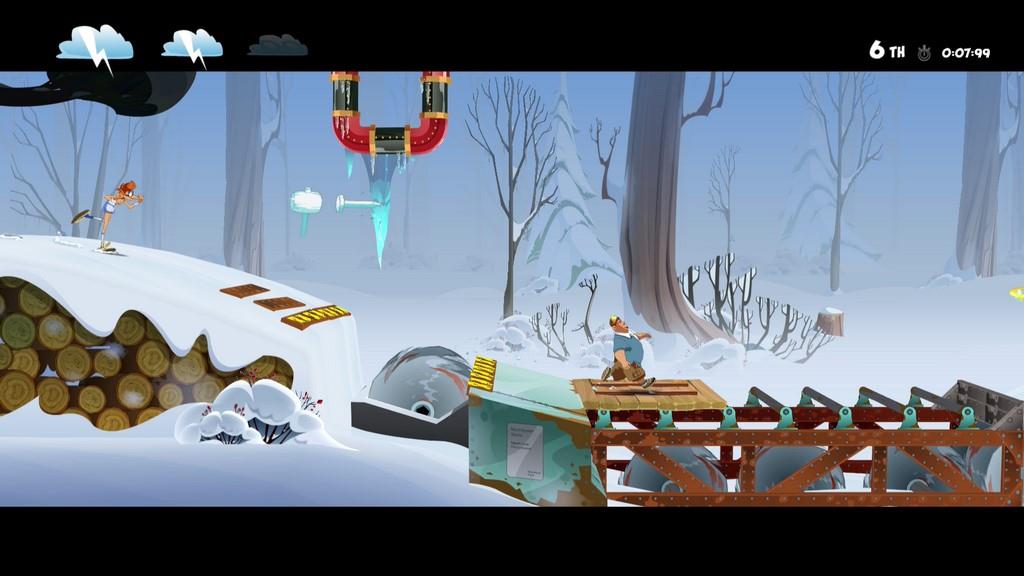 Think back to any sitcom or cartoon you’ve watched over the years.  I wouldn’t be surprised if one of them had an episode where two friends are arguing over being able to take any person and make them pretty/popular/athletic/whatever, and that they could do it to the next person to walk into the room.  Sure enough the next person to walk in is probably the nerdiest and most pathetic/unathletic/un-popular person on the show, and now they’re stuck with them.  In a sense, welcome to Harold.

You play as Gabe, an angel at Guardian School where angels are trained to guard mortals.  Gabe is the school’s best student by far and does well while barely lifting a finger, while Sara, who comes from a wealthy family and is pretty much your rival in the game, busts her but studying and still can’t keep up with Gabe.  Then comes the final exam in which the guardians must protect and aid some human runners during a race.  The student with the highest GPA earns a scholarship to Archangel Academy and all Gabe has to do is help his runner place third to get the scholarship.  However, when the runner roulette chooses everyone’s human runner, Gabe ends up with Harold, who is pretty much your stereotypical un-athletic nerd.  Oh joy.

As you can probably deduce from all of that, you don’t control Harold at all.  During each course Harold will continuously jog and it’s your job to protect him from obstacles and do whatever is necessary to get him to the goal.  Each course will have various obstacles you have to move or avoid to clear it such as moving bridges around or smashing down walls.  At first it doesn’t seem all that hard, but it doesn’t take long for this game to test your skills…and at times your patience.

Before the first two courses you’ll have some tutorials (one before each of the two courses) that’ll teach you how Harold works as well as how the game’s obstacles work.  The first tutorial session contains things like how to jump over gaps, swing across ropes, and utilize what are called puff powers, while the second tutorial teaches you about obstacles.  During each session or race you’ll come across wingrings.  Collecting these builds up your puff powers which have two uses.  If you happen to fall off of a course or hurt yourself in some fashion and have at least one full puff power, you’ll be put back on the course and can continue the race.  You can also use a puff power to “encourage” Harold, which means you zap him with a bolt of lightning and he will actually run for a few moments which also increases his jump speed.

Aside from the tutorials you’ll have the races themselves.  However, before each race you have to go through the practice sessions.  Basically, the practice session is the race, but without any other racers, you only have to complete one screen at a time, and you’ll always have a puff power to start with.  They’re basically there to get you prepared for what’s up ahead which is a good idea, except you might not always have puff powers available to you.  Keep in mind that if you fall into a pit or other obstacle, you’ll lose a puff power and if you have none left when you fall into an obstacle, you’re done. 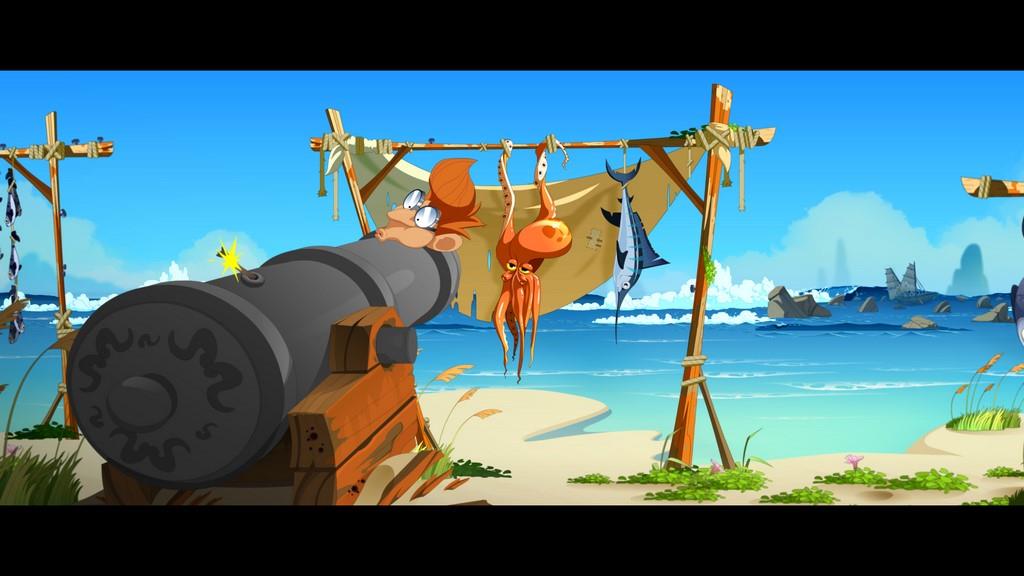 Once you complete each courses practice sessions you’ll be able to access the race for that course.  All you have to do is finish third in a race to proceed to the next course, and this is where I start to get mixed feelings about this game.  The first race wasn’t all that bad and I came in first with little effort.  The next race though is where the difficulty naturally started going up a bit, and it all had to do with the AI opponents.

In the tutorials for the second race you’re taught how to sabotage your opponents.  Is another runner climbing a wall?  Break it down while they’re climbing on it.  Someone starting to jump onto a platform suspended in the air?  Move it out of the way.  It’s simple enough in practice (pun slightly intended), but during a race there are times in which it doesn’t have a lot of effect depending on how far ahead your opponent is.  Case and point, during the second race I had a few instances of where my opponent was roughly half a screen’s distance away from me when I swiped a moving platform out from under her sending her into the pit below.  By the time I was almost past the moving platform myself, my opponent respawned on the other side of the obstacle and still had a bit of a lead against me.  I was able to pass her, but not by much.  You'd think they would spawn behind the obstacle, not after it.

It also doesn’t help that Harold has quite a steep difficulty curve to it.  The practice sessions aren’t all that difficult, though they do get challenging at times if you’re going for every star (getting all three will show you an easier path through a race), but as more obstacles are introduced and the races start getting tougher, you’ll find that you’ll be multitasking a lot in this game.  The first race was a breeze, but the second gave me more trouble than something that early should give a player.  Sabotaging the other racers can help if you’re close to them, but then you have to remember to put the obstacles back in a position where you can clear them yourself.  It doesn’t help when you swipe a bridge out from underneath someone if you yourself can’t cross it safely. 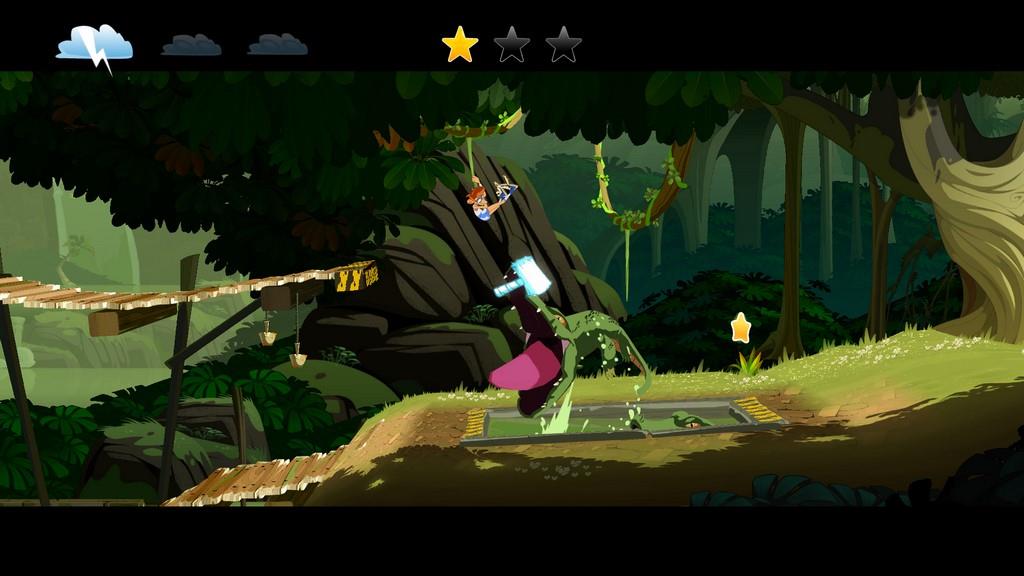 If you finish a race you have a Challenge option you can try.  This is essentially running at a constant full speed through the course while collecting stars, but falling prey to a single obstacle results in a failure.  Granted you have no other racers so there’s no one to sabotage, but you still have to have rather sharp reflexes to get every star and know what to do when a trap is coming up.  At this point I’ve still never completed any of the challenges.  However, I do enjoy the challenges more than the races themselves, which given the races are the meat of the game, that’s not really a good thing.

In the art and audio departments, the game looks and sounds great.  I like the art style the game uses and the cut-scenes and narrations are really well done and got a good laugh out of me once in a while.  There are multiple settings you’ll race through during the course of the game such as the forest, desert, and arctic, and all of them look really well done.  It’s a shame that you won’t have a lot of time to admire the passing scenery as you’re concentrating on moving obstacles around to keep Harold alive.

When it comes down to it, Harold is far from a bad game; it can just get quite frustrating at times.  The steep difficulty curve is probably what would drive some people away.  The first race wasn’t all that difficult and I cleared it with relative ease.  The second race however saw the difficulty spike up quite a bit, and there are still about ten more races after that (four areas, three races in each area).  However, if you can get past that steep curve, Harold is a fun game that definitely challenges you and your reflexes.  Plus, the cut scenes are entertaining in a cartoony sort of way.  Not a perfect game, but far from a bad one.

Harold is one of those games where if you don’t like steep difficulty curves, you’ll likely want to stay away from it.  If you can get past that though, Harold does provide a pretty good challenge even in the early going and really tests your reflexes as the races get harder and you have to multitask even more obstacles.