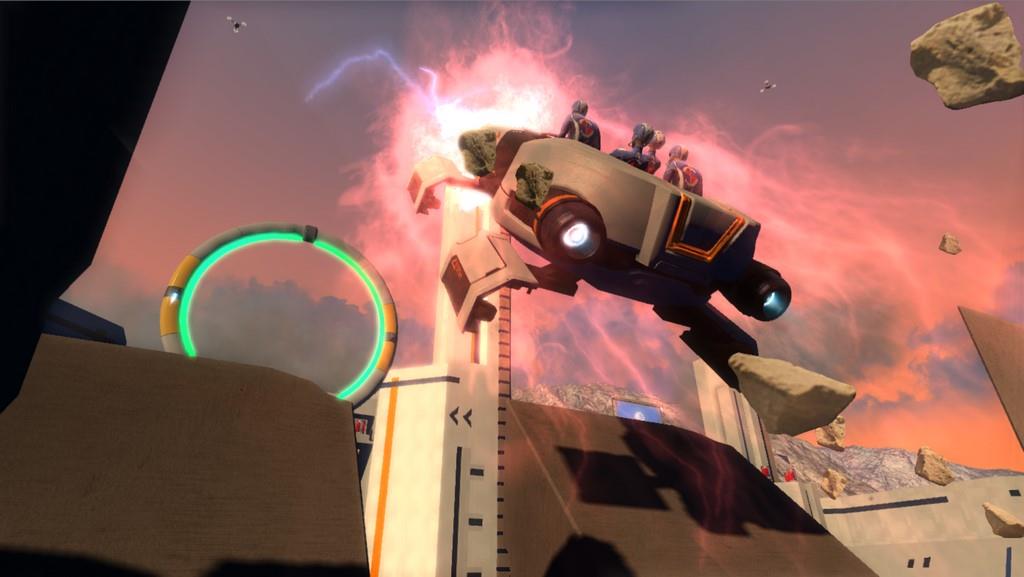 Written by Nathan Carter on 3/2/2015 for XBO
More On: ScreamRide

I'll just come right out and say it. ScreamRide is amazing!

I'm sure everyone at one time or another has played a Roller Coaster Tycoon game and who wouldn't. They are incredibly fun sim games where you create your own theme parks. The best feature of those games, was the ability to create your own roller coasters. Whatever wacky and crazy coaster you could think of was pretty much possible. Now, what is the one thing that almost everyone would do when creating coasters? Yup, create the craziest coaster possible and then leave part of it unfinished. This would always result in the cart flying off the track, sending tons of virtual people to their death. Unfortunately in Roller Coaster Tycoon, unless you were doing this in free mode, you were penalized heavily for it. ScreamRide on the other hand not only gives you the freedom to do this, but it embraces it and boy is it ever fun. If you told me I would have to put together a top 10 of 2015 list ride now, ScreamRide would be on it. This game is just pure fun.

The main career mode of ScreamRide is broken up into three separate game modes, and each of them are equally as fun. The first career path is the screamrider path. Here you actually get to ride a series of pre build coasters. You won't simply be just watching however as you are in full control with an accelerate, break and turbo button. You need to control the car on the track because if you go into a corner, and don't lean into it, the coaster could derail and go flying off the track. As you progress through this career, the game will start to throw newer challenges as you. Some include jumps from one track to another you have to complete, one side of the track being gone forcing you to two wheel on one side, extremely sharp turns that will come out of nowhere and track blockers which will. Derailing the coaster is incredibly fun and some levels require it, but if you want to complete certain challenges, you need to learn how to not derail the coaster no matter how temping it is. Don't worry though as some levels will actually have derailing the coaster as an objective. Everything you do while you are on the track will earn you points. This includes using building and using turbo, riding on two wheels while going around a sharp corner and how fast you finish the course. Each level has a set specific set of challenges that when completed, add to your star rating at the end of the ride. These challenges may include finishing the track in under a certain time, completing perfect turbo collection, not derailing the coaster, or finishing the course in a certain time. All of these challenges are incredibly fun and I found myself going back to previous levels over and over again to complete them. The game uses a stars and unlock system which is why going back to complete challenges is important because the more stars you have, the more levels will open up for you. 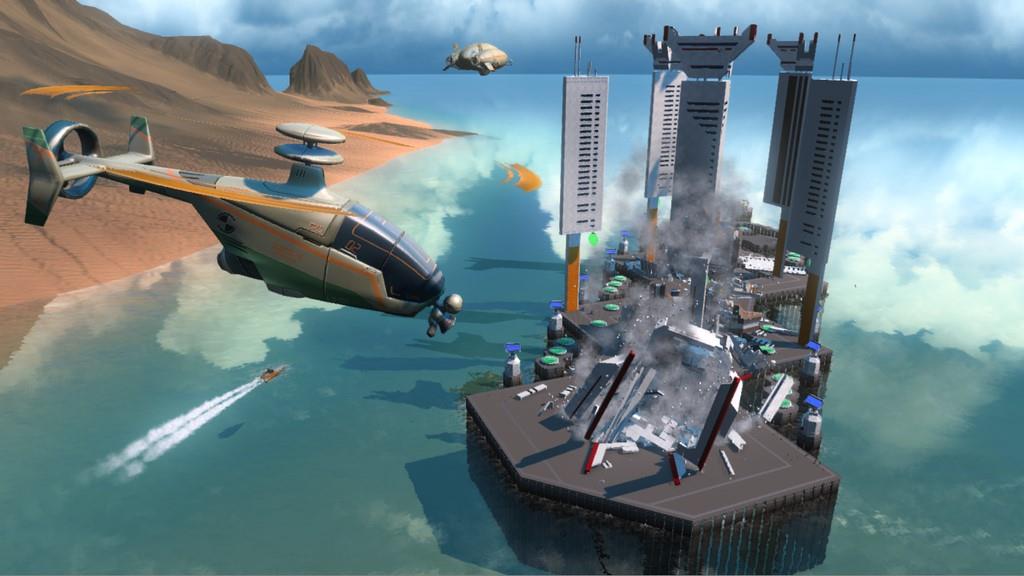 The second career path is the demolition path. In this path, there are no coasters, only launchable cabins, and buildings, lots and lots of buildings. If you have played Angry Birds before, you know what's coming. You start in a central location and have to launch your cabins towards buildings. You'll want to target those buildings weak spots, and if you do, you get to watch the buildings come crumbling down in pieces. This game mode was quite possibly one of the most fun and addicting game modes I have played in a long time. The game does a great job of utilizing its physics engine so no two building collapses are ever the same. What's even more satisfying is when you start to advance through the levels and they start adding things like explosive barrels to the levels. Hitting one of these could set off a massive chain reactions which causes two or three skyscrapers to all come tumbling down at once. One incredibly satisfying thing that can happen is if you hit a building just right, it will fall and topple the building that is right next to it. There are plenty of reasons to come back to this mode as well as it offers its own unique set of challenges as well. Some of these include setting off a certain number of explosions, launching your cabin through a certain number of hoops, hitting the trampolines, destroying giant TV screens in the arena and of course, getting to a certain high score. You will be presented with numerous new cabins as you progress through the levels as well including ones that control better in the air, one that breaks off into three separate pieces and one that turns into an airplane which unfortunately is damn near impossible to control. The difficulty seems to ramp up rather quickly in this one though as you will be presented with walls you can't break through and buildings you can only hit by bouncing off trampolines. What starts as an easily building breaking task turns into trial and error pretty quick and while it is frustrating, it is still fun.

The third career path is the engineer path. Here, you put your coaster building skills to good use. You are given a coaster with no middle, you can build however you please, but have certain guidelines you have to adhere to. This mode seems to be the most strict out of the three as there are tasks that must be completed or else you will fail the level. Most of them include reaching a certain speed, or making the coaster cart travel a certain length. Of course you get some challenges here as well and most of them involve using certain track pieces, or reaching a certain scream rating. Here you don't have control over the coaster, but it's incredibly fun to create a ridiculous track and watch all of the riders being thrown out of the coaster due to high speeds. The only problem I have with this mode is that it's somewhat annoying to build the track with the camera. It is extremely difficult to position the camera in a way to easily see your track being built, especially when it comes to putting the final few pieces of the track down. Thankfully there is an auto complete button so when you get close to the end, the game will complete the track for you. This career can get pretty fun as well as they seem to combine demolition into it. Some levels will have to create a track and want you to launch the riders into a building at the end. 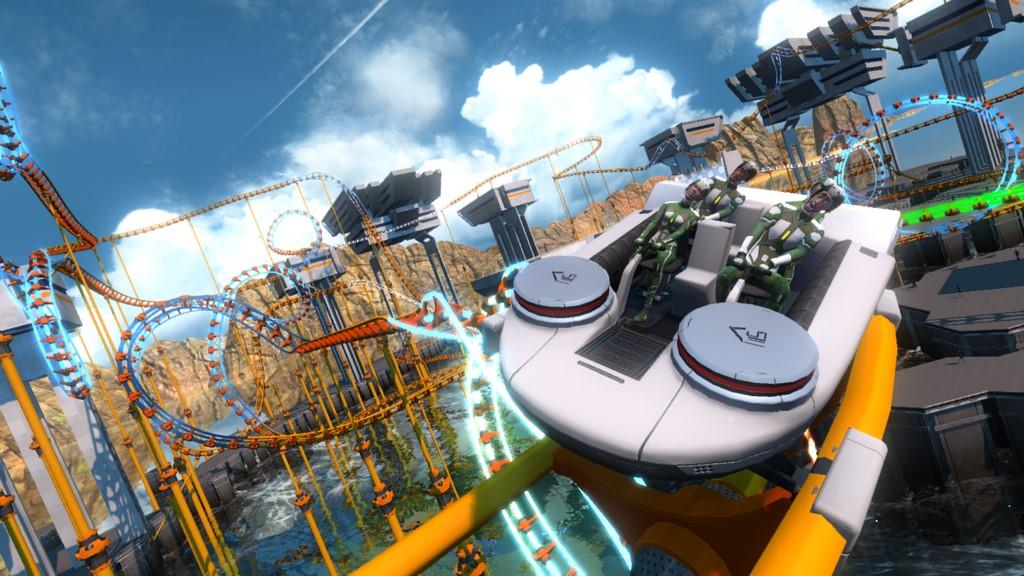 All in all, the career mode itself offers tons of fun and plenty of reason to go back. Not once have I ever gotten board of derailing the coasters, destroying buildings or putting my riders through a coaster of death. If you do get board of the career mode however, the game will let you unleash hell by creating your own tracks.

ScreamRide provides a sandbox mode where you can build whatever you want. From coasters to buildings, you get a chance to create some pretty nifty stuff here. Now most of the content is locked behind career mode. You do get a decent amount of stuff to use as the beginning, but if you want all of the tools, you have to play through the three career modes as each mode will unlock content for sandbox mode as you play. Thankfully the career mode is fun, but if you jump right into sandbox when you first get the game, you might be a little disappointed when you see how much is locked at the start. If you are like me, and aren't that great at building custom things, the games online feature will let you upload your own tracks and of course download new ones from the community, pretty much meaning there will be an endless amount of content for you to play with. I cannot wait to see how many amazing tracks the community can come up with when the game launches.

If I had to describe ScreamRide in one word, what else would it be? Fun. Nothing but pure fun. This is one of those games that says "I am a videogame, please play me, please enjoy me" because it is an absolute blast. There is never a dull moment and I cannot wait till the community starts uploading tons of new content that I can download a play. If you were a fan of roller coaster tycoon and you love physics based destruction like you sometimes see in games like Battlefield (odd comparisons I know) then you should not miss out on this. If you own an Xbox One, this is one game you should absolutely have in your collection. Have fun everyone!

ScreamRide is currently the most fun I have had with a videogame in 2015 so far. I think the idea of this game is brilliant, and it is absolutely addicting to play. With three separate career modes, a beautiful physics based destruction system and the sandbox mode, this should keep you occupied for quite some time.