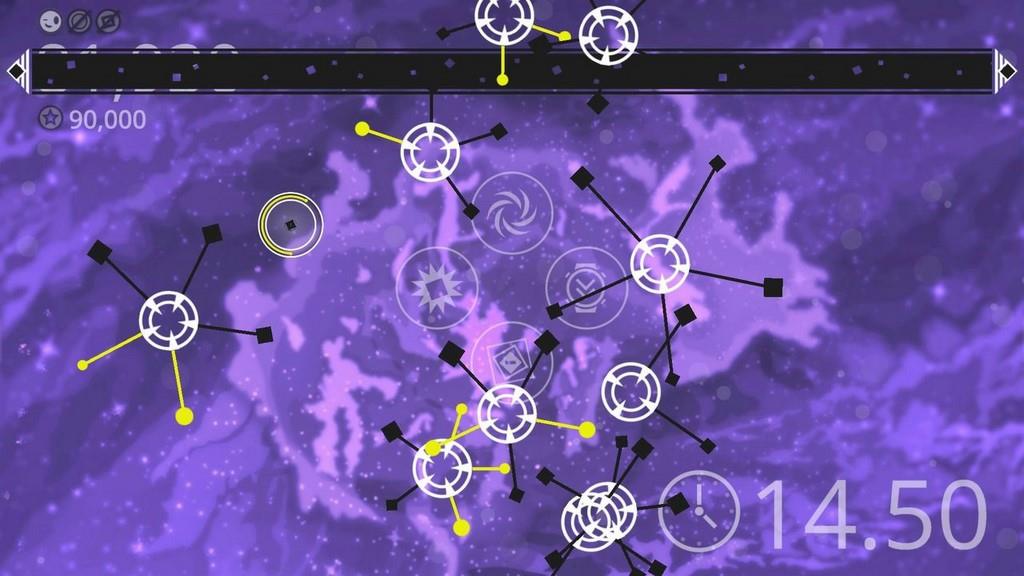 Combining gameplay elements in hopes of capturing that peanut butter and chocolate dynamic don’t always work when it comes to video games, as my track record in Game Dev Story will attest. But that’s not real anecdotal evidence, and I’m glad to see that the team at Red Phantom Games taking some unconventional styles of gameplay and make them into a quick burst of fun with Minutes. If Ikaruga had a little brother that always wanted to be a puzzle game, you’d have Minutes, which starts out deceptively simple and by the end of the few hours you’ll spend with it you’ll be swearing up and down at your Vita, while hitting the replay button time and time again.

Minutes lives up to its name right off the bat. Stages only last for one minute, and in that span of time your goal is to get your score as high as possible. This is accomplished by moving your circular marker in to colored lines to absorb them, but there wouldn’t be much of a challenge if there wasn’t some kind of opposing force. In this case it’s some dastardly black lines that will destroy you if you absorb too many. As you progress through Minutes you’ll unlock some skills that will aid you in improving your scores. Increase your size to move a bit more slowly and earn double or triple the points, or shrink yourself down to increase your speed and navigate through tight spaces at the cost of half the points. You will also unlock power-ups as you progress, these will allow you to slow down time, restore your health, destroy black lines within a small radius, or shield you from them for a limited amount of time.

Early going the game feels a little slow, but as you earn more stars you’ll fly through the game’s sixty levels. This sort of minimalist approach means that they’ve cut right to the chase, this game is all about solid gameplay, and you’ll find that you can tackle each level in a bunch of different ways in that search for perfection where you take no damage, earn three stars, achieve 100% completion, and find the ‘Minuteman’ who is hidden in each level. When I say fly through this game, I don’t mean you’re going to be easily clearing each stage with three stars. This is a game that actually gains a fairly great amount of replay value thanks to its difficulty.

This game isn’t going to win any audio/visual awards, not that it needs to thanks to its gameplay. But I’ve got to be honest when I say that this game looks plain, which is both a blessing and a curse, it makes the game that much more accessible but early on it might turn players off, the later levels will have you glad that this game looks the way it does. The music is probably the most disappointing part of this game, it’s some fairly generic electronic ditties, but I’m not really that bothered by this because the stages are short enough that they do their job, and it’s tough to cram a full song in to one minute, so maybe it’s better to say that the music is serviceable.

This game definitely has a great premise and is a short burst of challenging fun that will definitely appeal to puzzle gamers out there who are looking for something a little different. The cross-save functionality means you can also take your progress on the go with the Vita. Between the two though, I actually prefer to play on the Vita, for some reason it felt a bit more responsive. If you’re looking for a quick burst of fun puzzle action, Minutes is a worthy title of a few bucks and will offer much more in terms of gameplay time than its name suggests.

Minutes surprised me with its challenging yet fun gameplay. After a few rounds of gameplay I was hooked and now whenever I need to take a short break I find myself reaching for my Vita to give this game a few Minu... err, rounds.