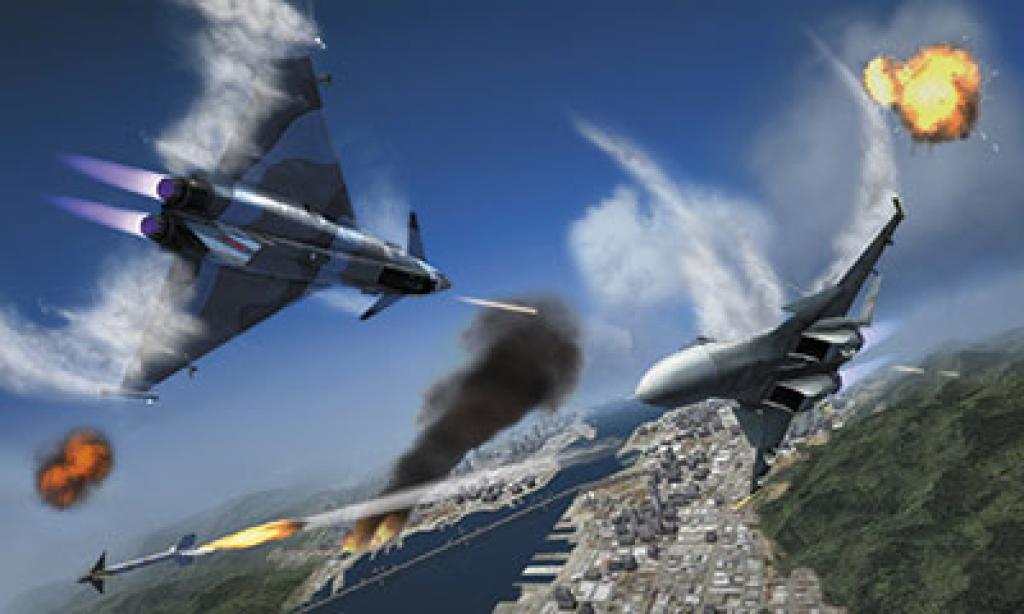 The Ace Combat series has been around for quite a while now, delivering a fusion of frenetic arcade-style action and surprisingly deep flight sim controls in one package. Ace Combat grew up on the Playstation line, but it’s branched out in recent years to reach new platforms, including the 3DS. Back in 2011 Ace Combat Assault Horizon Legacy was one of the early titles for Nintendo’s then-struggling handheld, and provided a surprisingly authentic Ace Combat experience on the hardware. For some reason, Bandai Namco has decided to release an updated version as a full retail game, adding the "Plus" moniker to the end of the title.

This is ironic, considering the original 3DS game is itself a remake of the PS1 classic Ace Combat 2. So, should you get Ace Combat Assault Horizon Legacy Plus if you already own the PS1 game or the 2011 3DS version? Well, that’s a difficult question for me to answer, as I never bought the 2011 version, so I’ll be reviewing this game from the perspective of a first-time purchaser.

Ace Combat Assault Horizon Legacy Plus essentially boils down the more complex console versions of the Ace Combat formula into an enjoyable and effective portable game. The controls aren’t as complex and the missions aren’t as long, but this format is eminently suited to the nature of a handheld platform. The story is an expanded version of the original Ace Combat 2, but like a lot of military anime, it’s pretty convoluted and bogged down in politics. Basically, a conflict has broken out among multiple allegiances of fictional nations. A rebel faction threatens the shaky peace established at the close of the previous war, so the Tactical Fighter Squadron "Scarface" is tasked with putting down the rebellion and patrolling local cities and assets.

This is a solid excuse to get a lot of aerial dogfighting done; the last significant real-world fighter plane engagements happened decades ago during the Cold War, so the conflict has to be fictional. It avoids current-day messy politics by replacing it with fictional messy politics, and sidesteps the last great era of aircraft combat, World War II. This also lets Horizon Legacy Plus include a roster of modern and near-future aircraft, some of which are still in testing and design with real-world governments. 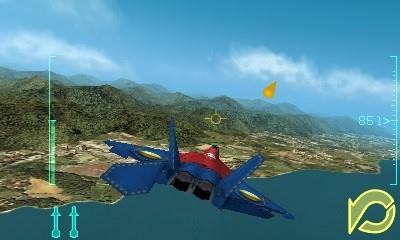 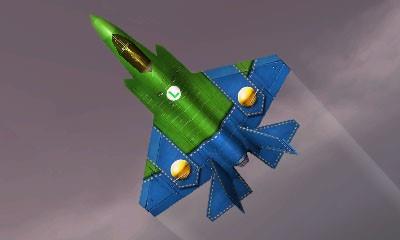 Aside from framing and atmosphere, the story doesn’t matter much. Horizon Legacy Plus puts it to the periphery early on in order to focus on the gameplay, and, thankfully, what we have here is remarkably solid. The game is comprised of over 20 fairly brief levels, most requiring that you complete them in less than 10 minutes. The basic gameplay is straightforward, and will be familiar to anyone who played a Star Wars: Rogue Squadron game. You pilot one of several distinct aircraft in all-range combat, shooting down rebel planes or strafing ground targets, while avoiding damaging friendly targets.

These missions range from assault, hit-and-run and escort to bombing and recon. The early levels had me destroying encroaching rebel fighters, or taking out an enemy bomber and its escorts. Before long, I was liberating a port city from rebel influence by eliminating anti-air emplacements and sinking rebel destroyers and supply freighters. The combat is tight, responsive and pretty easy to pull off, eschewing complex simulation for more arcade-style action. That said, there are still some complexities. Flying too high or too slowly will cause your aircraft to stall, something you don’t see in most arcade flight combat games.

While you carry an improbable quantity of basic heatseeking missiles and an infinite supply of high-caliber ammo for your main cannons, you are limited to just a few uses of a special weapon. You can pick these special missiles or bombs before each mission, and many act like the typical anime missile-spaghetti spam, streaking out multiple warheads to decimate entire squadrons of enemy craft. This makes the combat at least somewhat balanced. You can also execute some death-defying maneuvers when your special move meter fills up; this lets you dodge incoming missile locks or effortlessly swing in behind a pursuing fighter for an easy kill. As you complete missions you gain a kind of currency based on your performance, which can be used to upgrade your base planes with enhanced weapons and armor, and purchase brand new aircraft. 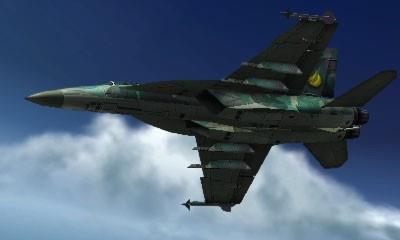 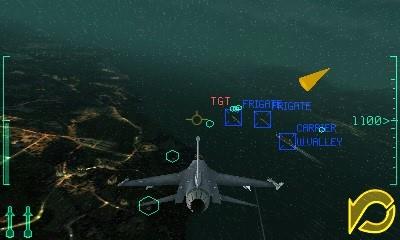 Of course, if you have some Amiibo figurines lying around from Smash Bros. last November, you can just skip the upgrade-purchase process entirely, and this is where the "Plus" in the title comes in. The enhanced rerelease of Horizon Legacy basically just adds a few New 3DS-exlusive features. While they aren’t hugely significant, they are fun. By scanning various Amiibo—Mario, Luigi, Samus, Star Fox, etc.—you gain character-themed planes instantly. This would be a cool bonus if it didn’t completely break the balance of the combat.

The Amiibo unlock the best planes in the game; they’re so overpowered it’s almost funny. You might as well just stick with the Star Fox plane because, naturally, it’s the best one, and one of the coolest looking, too. In fact the designs for all these Amiibo planes are pretty slick. The Mario and Luigi ones have this cool two-tone paint scheme that mimics the plumbers’ colored shirts and overalls. Zelda’s plane is decked out in elegant Hylian sigils, and the Metroid plane has Samus striking a pose on the side. Playing around with these Nintendo-branded aircraft was a lot of fun, even if it made the game pathetically easy, but in the end it just made me wish for another handheld Star Fox game. The "Plus" version also supports the New 3DS C-stick, but I didn’t use it all that much; the original controls suffice just fine.

The whole experience is wrapped in some impressive production values. Barring some muddy terrain textures for when you skim too close to the ground, the game really impresses on the 3DS hardware, with some particularly eye-catching 3D effects. Streaky clouds and enemy fighters pop nicely against the vivid blue sky, and the high-poly models of your own aircraft have striking reflection mapping and fierce-looking engine exhaust shaders. I was also impressed by the large quantity of voice acting, and the dreamy, effervescent music. The story might be superficial, but the acting is good and straight-faced enough that every briefing and in-mission com chatter makes you feel like you’re part of a believable modern conflict. 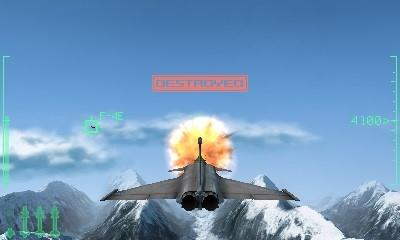 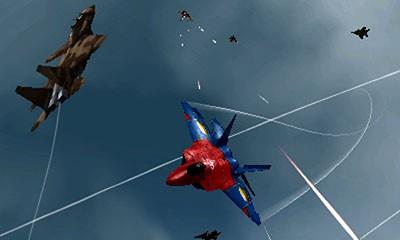 Horizon Legacy Plus isn’t a long game, with the campaign clocking in at around five hours, but like any good arcade flight game it encourages you to replay it. The campaign has a branching path so the only way to experience and unlock every mission is through multiple playthroughs. The missions themselves have a complex score breakdown that rates your performance, so you can go back and try for a no-damage run or a higher kill rate. This game accomplishes exactly what it set out to do: condense the Ace Combat experience into a portable package without losing any key elements.

For that reason it definitely gets my recommendation, but if you already picked it up in 2011, there’s little reason to double dip on the rerelease. The Amiibo are a fun extra, but the core experience is the same. That said, if you never bought the game, Horizon Legacy Plus is definitely the version to get. It’s a great action game to pull out when you’re bored, and it’s a solid showcase of the New 3DS and its abilities. If you’ve been looking for a fun, straightforward game that impresses on all fronts for showing off to your friends, Ace Combat Horizon Legacy Plus will get the job done.

Ace Combat Horizon Legacy Plus is exactly what you want from the series: Ace Combat on the go. This new version isn't essential if you have the original 2011 release, but if you've never bought the game, the new Amiibo support and other features make the Plus edition the one to own.