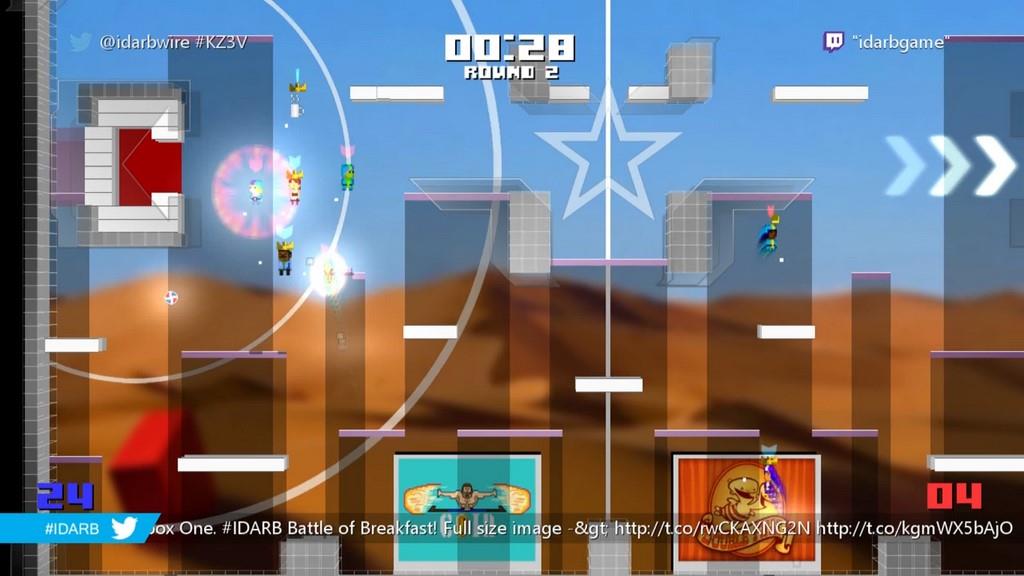 From the split second I hit the #IDARB menu screen, I instantly fell in love. What I fell in love with more though, is just the whole idea of the game itself. I felt like I was watching a sport, and an extremely fun one that's both a blast to watch and play at the same time. Everything from the graphics, to the music, the presentation, was just amazing to me and I loved it even more as I hopped into my first game.

So what is #IDARB? Imagine an Atari 2600, or Intellivision basketball game ramped up to 11. I guess you could say that if NBA Jam existed back in the early 1980's, it would be #IDARB. The game plays on a 2D court. The goal, pick up the ball and throw it into the goal. This of course is way easier said than done as both your and your opponents will be constantly bouncing off each other and the map for control of the ball. The controls are very easy to learn as well as you have one button to jump, one to try to knock the ball out of your opponents hands and a button to pass. You also can aim the ball with the left thumbstick, which is also the same stick you use to move so getting the ball into the goal can be a task in itself especially if your opponents next to you. Matches are short, lasting four rounds and each round is a minute long. At half time, everyone then competes in a little halftime showdown in which the game picks randomly from a set of minigames which play homage to classic videogames such as a minigame based on Combat from the 2600 or more recent releases like Flappy Bird. If you do have some friends with you, there is another layer of strategy added as you can try to pull off trick shots by passing to your teammates to score extra points. Of course while all of this is happening, you have the great sounds of the crowd cheering you on and a funny NBA Jam announcer who will shout off random quotes from movies, TV and videogames. Regardless of how many people you are playing with or against, it makes for some incredibly intense games.

Now we get to the part of #IDARB that I absolutely love the most. Whenever you play a match, you will see a Twitch ticker scrolling on the bottom of the screen. These are not fake. These are actual chat responses from people talking about the game. This is an amazing idea and really adds to the experience. Again, things like this make me feel like I am watching and taking part of a sport. Your games can also be streamed via Twitch for the community to watch and If you have #Hashbombs on, the Twitch community can also mess with your game by typing in specific keywords that will cause certain things to happen. Some of these things include increasing or decreasing the gravity, causing the arena to fill with water, or cause a giant ghost to pop up on screen and scare the crap out of you. Major kudos to the devs for this and I really hope to see more games where the community can interact with them while watching at home.

What I also loved about #IDARB was the great presentation, the music and the sound effects. Prepare to take a trip down memory lane as all of the characters are presented in wonderful 2D pixel art and this is accompanied by great music and sound effects that sounds like they were ripped right out of an Atari 2600 game. As someone that grew up with Atari and Intellivision, I instantly fell in love as soon as I started playing the game. The game even includes an incredibly fun and easy to use character creation system where you can create your own pixel art characters, logos, teams and you can even create your own music as well. Speaking of teams, they are amazing. When I first went into the preset team list in the game I had the biggest smile on my face. There are various teams in the game that you can play as including simple ones like the red and blue team, and some silly ones like the Ballerinas, Your Moms, Breakfast which is all 2D art of breakfast food, Arcade cabinets and Dead Presidents. The one thing however that caught my eye and I absolutely loved is that there are various teams based on tons of different videogame developers and IP's. There is a Killer Instinct 2 team based on KI characters, one called Way Forward featuring Shantae characters, one based on characters from Halo, Retro City Rampage and my favorite, The Damsels, based on Disney Princesses. I absolutely love this as I feel like this could be something of a videogame Olympics. I know we have tons of collaboration games like Super Smash Brothers and Street Fighter X Tekken, but I would love if there were one game, where characters from various franchises, from Sony to Nintendo to Microsoft all come together as one in the spirit of competition. I know that it's probably never going to happen but #IDARB may be the closest that we get to something like that. 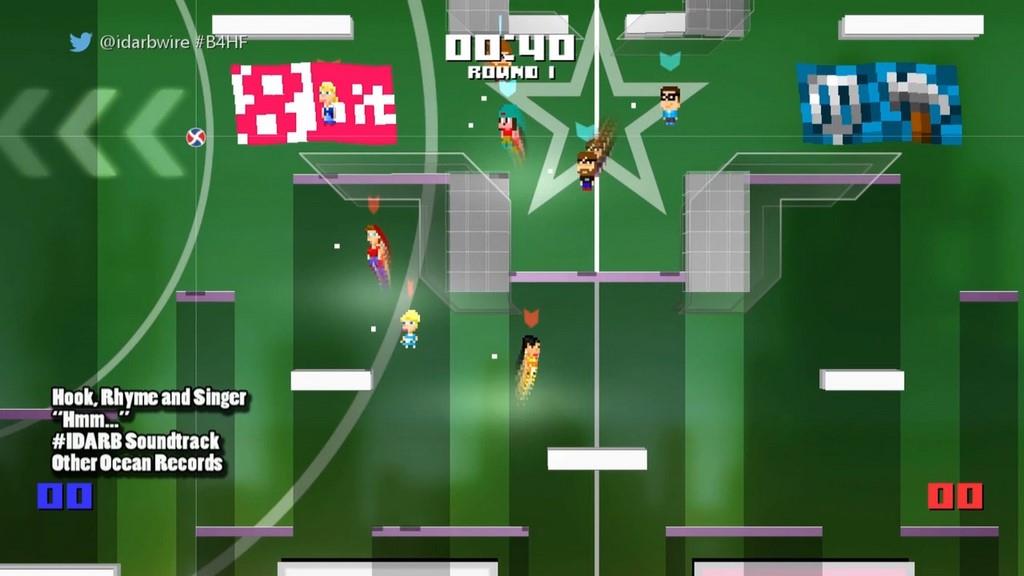 Now as fun as the game is, there was something that was incredibly disappointing for me. Unfortunately, as the game stands now, it's only a couch co-op game. You can play online against other players, but you can only play against however many people are in your party. If you are by yourself, you will only be able to have 1 on 1 matches. The other thing is that aside from the single player campaign, which is pretty short, you can't play with or against bots, so unless you have some friends with you, you are kinda out of luck. I find this weird because you can have bots as teammates and opponents in the single player campaign so I don't understand why you can't have them in single player besides for the campaign. The good news though is that multiplayer matchmaking support is coming in the future, but as it stands now, if you don't have some buddies to come over and have some extra XBox One controllers, you will only be able to play one on one matches. The good thing though is that you do have some friends to bring over, this is the perfect party game.

Even with that small disappointment, I absolutely love this game. #IDARB has a bright future ahead of it. The same is simple, but incredibly fun and action packed. Not being able to play 4 v 4 matches with bots is a disappointment but 1 v 1 matches are incredibly fun as well. I really hope #IDARB starts to establish and grow a fanbase, which should happen as it's free for February's Games with Gold program. If you do have an Xbox One and are have Xbox Live, you need to download this game and check it out before it expires next month. Its fast, fun and has an adorable pixel art theme to the game that plays fantastic homage to games of yesteryear. Let the games begin!

I love this game, and will probably love it even more once online matchmaking gets added. Even if you are playing 1 v 1 matches, it makes for an incredibly fun time and since matches are short, you will probably find yourself saying "just one more match" over and over again like I have.