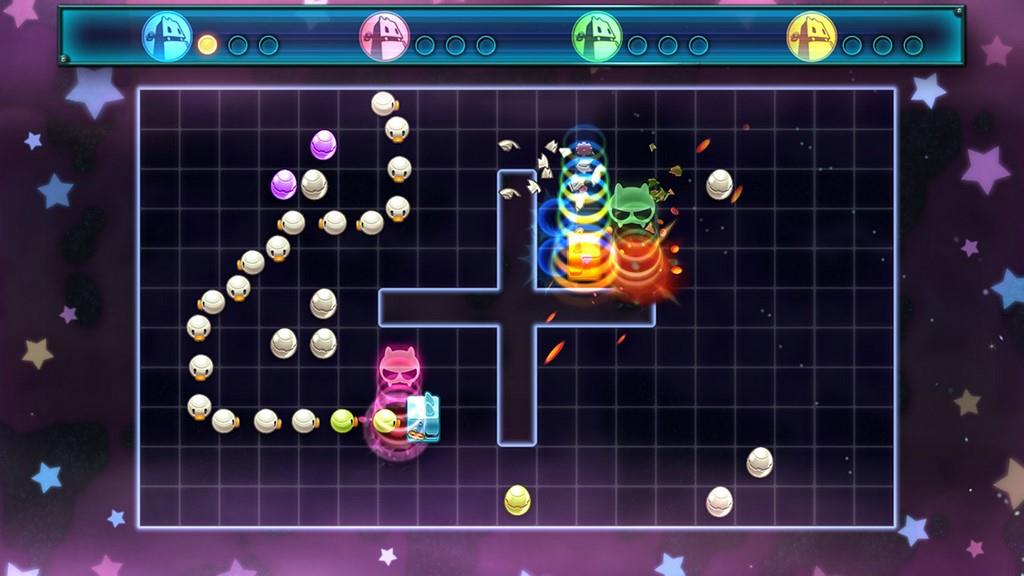 Pix the Cat is a weird game to review. It’s so…pure. Like most good games in the classic arcade tradition, it just works, and there’s little wiggle room to complain in. Reviewing Pix the Cat is like trying to review Pac-Man—I mean, it’s freaking Pac-Man. It feels like a futile exercise. That doesn’t mean I’m not going to try, though!

Pix the Cat is a new game, so it isn’t completely except from critique. Analyzing it is more like reviewing Django Unchained rather than For a Fistful of Dollars; you’re analyzing an homage rather than the thoroughly reviewed and analyzed original article. That said, Pix the Cat has a lot in common with classic arcade titles. It’s basically a fusion of Snake and Pac-Man, with heavy influences from modern versions like the Pac-Man Championship Edition and Space Invaders Extreme series. So how does it stack up against these establishments of retro gaming and their more recent interpretations?

Pretty well, actually. The core mechanic in Pix the Cat is simple and straightforward, and the difficulty comes in mastering it at higher speeds. The adorably stylized cat Pix races around a pulsing neon maze. As Pix you must run over rows of eggs, which instantly hatch into ducklings that stick to Pix’s tail as if he were a mommy duck. Once you collect some ducklings, small glowing targets appear in the maze that correspond to the number of ducklings following you. Once you deposit the ducklings on the targets you start to earn points, but the more ducklings you line up and subsequently drop off, the higher your score combo goes.

So basically it’s best if you can get a huge conga line of ducklings racing behind you, and the best outcome is to grab all of them on the current maze before lining them all up and placing them on the targets at once. This is where the challenge comes in. The longer your trail of ducklings becomes, the harder it is to keep from doubling back and running into your tail ouroboros-style. If that happens you lose all of your ducklings and your combo goes into the toilet. Hence the callback to Snake, which also has many similarities to the ghost conga lines you build up in Pac-Man Championship DX. Pix the Cat is steeped in old-school gameplay and does a pretty good job of putting its own spin on those foundational motifs. 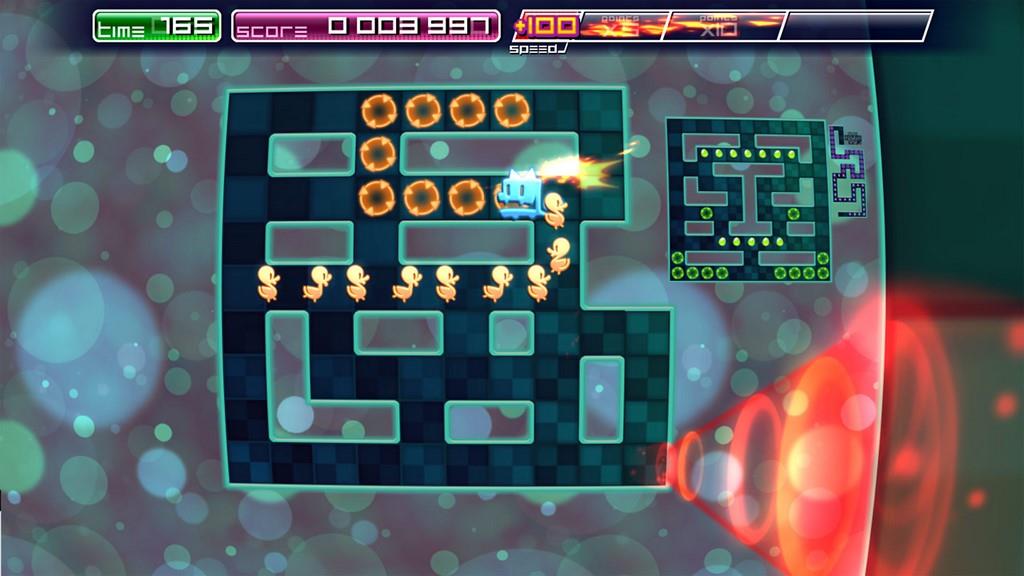 The biggest twist, however, is the time limit. Unlike classic Pac-Man, the strict timer from Championship Edition has been integrated into Pix the Cat. You can’t take your time and circle a maze until your ducks are literally in a row—to get that high score, you need to go as fast and as deep into the game as possible. A cool helpful feature is that each subsequent maze is visible in the peripheral border of the current one you’re playing on. This way you always know where to go to get to the next level, and have an idea in the corner of your eye of what to expect. This lets you plan how to play the next maze while you’re wrapping up the current one.

Of course, rote practice and repetition play an important role as they do in any arcade game. To go really deep into a set of maps you need to practically fly around each maze, cornering perfectly and avoiding smashing into walls to keep momentum. This is one game where long-term mastery is the only way to go far and get those big scores. Younger gamers might find that frustrating, but the generation raised in arcades on Tempest, Dragon’s Lair and Ms. Pac-Man will feel right at home.

The graphics will be familiar too. Pix’s standard art style simply exudes retro affection. The mazes are constructed from thrumming, color-changing neon and Pix, his ducklings and the enemy skulls that populate the later mazes would look perfect on the side of an 80s arcade cabinet. The music is infused with the pulsing backbeats and heavy bass that would typically be blaring from the back of a Showbiz Pizza Place or Chuck-e-Cheese back in the day. The whole game is a huge love letter to arcade classics and culture, and it all flows smoothly and feels as natural as the games of old. 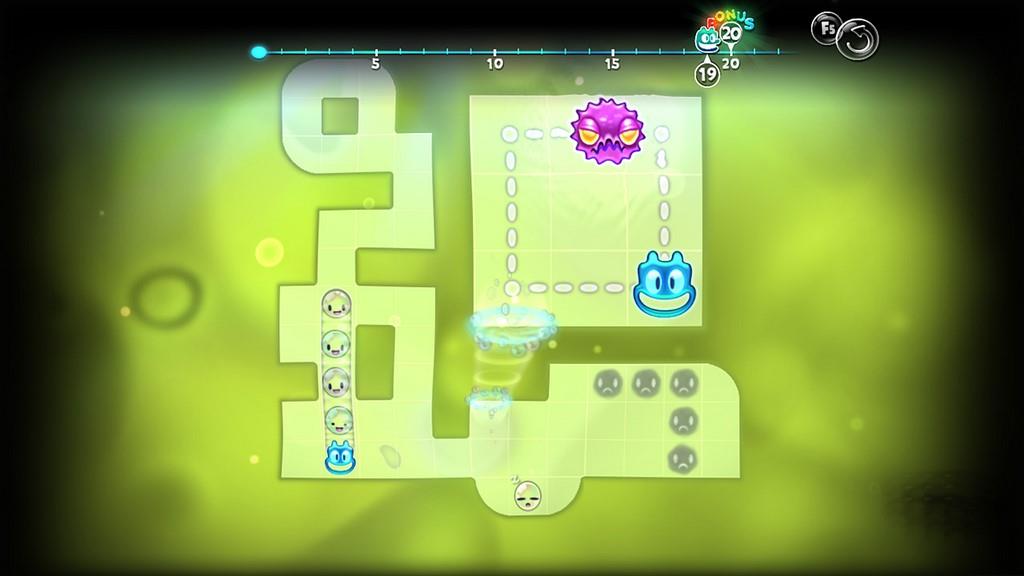 The game also has some unlockables to keep you drilling away at the main game. Nostalgia Mode doesn’t alter the gameplay but makes the graphics really retro, like silent film retro. The neon color palette switches to greyscale and all of the art looks like something out of a Max Fleischer cartoon—far more Felix the Cat than Pix the Cat. There are little flourishes like an audience in the close foreground and a curtain that closes when you beat a level, and the music sounds like an old-timey orchestra pit. This mode is charming in its own way and really changes the game’s aesthetic, even if the gameplay is largely the same.

Laboratory Mode changes the art and music yet again—think tanks and test tubes, with dreamy electronica—but the gameplay changes drastically as well. Now it’s not about going fast, but picking your moves very carefully. Pix can only move in one direction for each turn until he hits something that stops him, so the way to win Lab mode is to plan your moves strategically. This mode has its own unique set of mazes and challenges that extend the life of the game considerably. My only issue is that you need to get pretty high scores in the main game to unlock both Nostalgia and Lab mode, which can be frustrating for new, unskilled players who want to see everything Pix the Cat has to offer straight away.

Rounding out the features is a competitive arena mode, where four players can battle it out at once. In this mode you collect eggs to use as projectiles, not cute ducklings that need rescuing. I didn’t play much multiplayer but it has a certain Chu Chu Rocket appeal so I can imagine it might be fun during parties as a break from Smash Bros or Mario Kart.

In the end Pix the Cat doesn’t rewrite the book on arcade games but it does offer a fresh, smart interpretation of those timeless ideas. With Lab mode it almost feels like two games in one, not to mention the extra announcer voices and other goodies you can unlock, and for a measly $10 on Steam it’s a great deal. Don’t hesitate to pick this up during your next Steam binge. If you appreciate the classics, Pix the Cat might just become your next arcade addiction.

Pix the Cat remixes classic arcade concepts into an addictive new concoction of high scores and vivid art and sound. It has many similarities to Pac-Man Championship edition but definitely possesses its own style and gameplay quirks. At $10 it’s a real bargain.