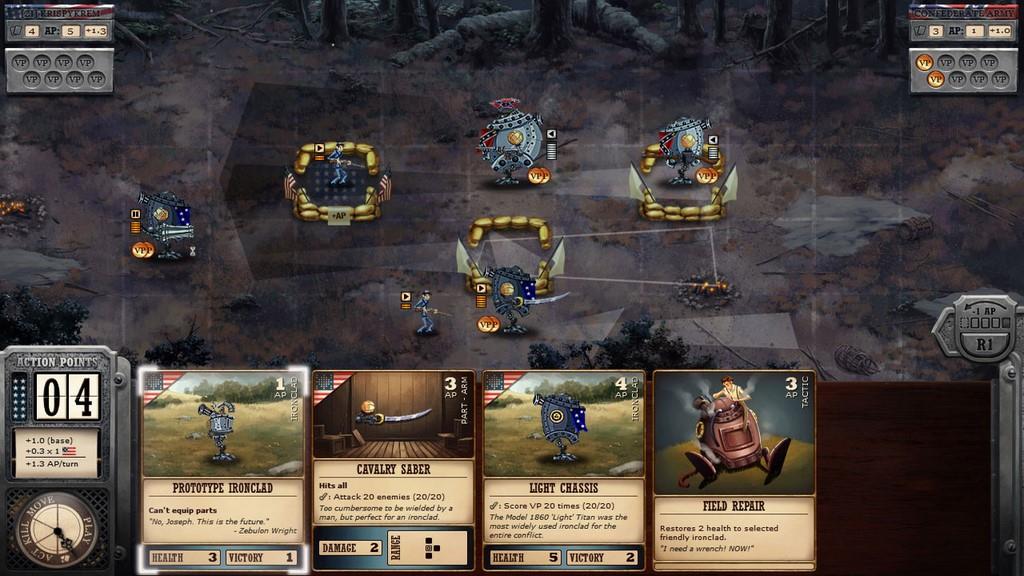 Ironclad Tactics is the Plants vs. Zombies and Civil War mash-up I never knew I wanted. It's a fast-paced strategy game that takes the best elements from collectible card games and merges them an alternate history lesson that is so over-the-top that I couldn't wait to see what happened next. You may not learn much about American history from playing this new PlayStation 4 game, but at least you'll have a great time.

The story follows Maxwell and Joseph, two lifelong friends and respected engineers. Through a series of motion comic-influenced cinemas, we discover that the Bureau of Steam Engineering has created a mobile robot known as an "ironclad." Unfortunately, the Confederate side also has their own robot army, led by a mysterious man in the very first Iron Man suit. Fearing the ironclad technology could tip the war, Maxwell and Joseph, along with a spunky United States Postal Service agent named Victoria, set off on a cross-country adventure to bring peace to this great nation.

Each battle plays out on a small grid, not unlike what we saw in PopCap's seminal 2010 hit, Plants vs. Zombies. But don't let the looks fool you, because this is no tower defense. Instead of simply fending off waves of enemies, the game takes its collectible card game influence and creates something much more competitive. Even if you cringe at the mere mention of Plants vs. Zombies or card games, the marriage somehow births an instantly likeable strategy game that is accessible to everybody.

The concept is simple enough: Players rush in from the left and the enemies come from the right, both moving towards each other's bases. Teams are awarded between one and two points for successfully maneuvering an ironclad safely to the other side. Normally, the first to eight points is the winner, but there are a number of different match types that keep Ironclad Tactics fresh and exciting.

Players go into each skirmish with a deck of twenty cards, each representing a different soldier, robot, weapon and upgrade. With dozens of cards to select from, players will need to choose carefully. Each card costs a certain amount of AP points, which is a meter that slowly fills up with each turn. Because these points are at such a premium, it's important to build a well-rounded hand that does the most damage. Finding this balance isn't easy, especially when the game is constantly throwing new characters and upgrades at the player.

Over time you'll begin to see the benefits of each card. Sometimes you will want to use the veteran rifleman because of his long vision, while other times it's important to take a solider that can avoid enemy fire by ducking. Some cards have secondary attacks, such as the Assault Pioneer. This lumbering character is able to create a barricade to stop enemies in their tracks. Similarly, the Jetpack Chassis is capable of moving great distances in a single turn. 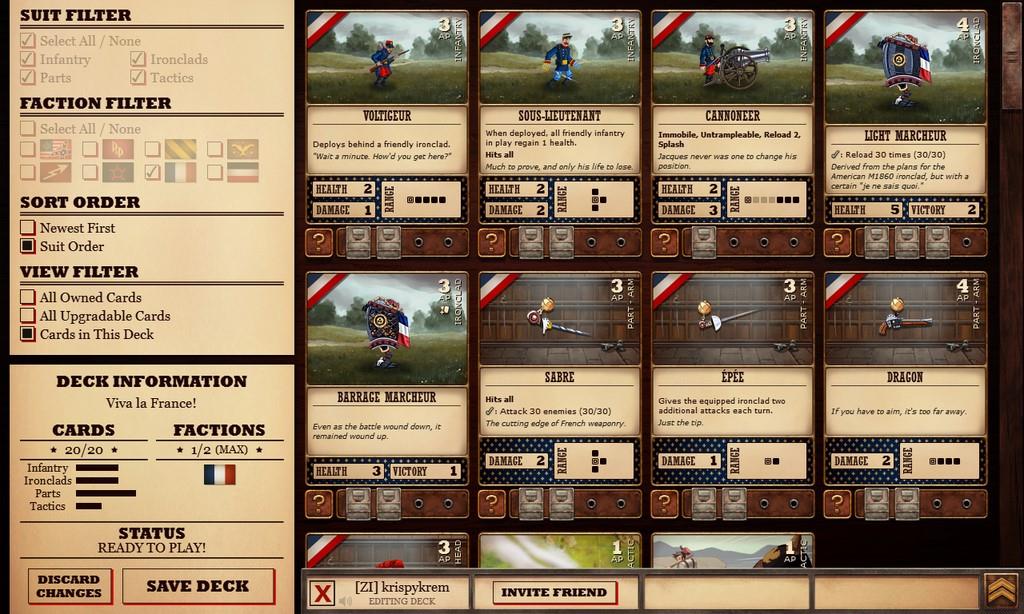 These are fairly simple examples, but the cards get much more complicated as Joe and Max make their way west. We discover that each region of the United States has its own types of fighters and mechs, which includes cowboys, Indians and prospectors.  There are so many different types of characters and factions that you'll often want to take more than twenty cards into a battle.

The cross-country trip takes players from New York down to Georgia, over through Texas, beyond Arizona and up the west coast to Seattle. While many of the stages play out the same way, there are a few variations on the formula to keep things interesting. You'll run into a number of different boss fights, as well as stages with gun turrets. The most challenging missions are always those that require players to outlast an incredibly difficult onslaught of Confederate robots as the timer counts down.

On top of the usual story mission, each stage has its own bonus objectives that payout with rare cards. There are also a number of extra modes on the stages, such as a puzzle to solve and one-on-one skirmishes to take on. And when you finally make it to Seattle, there's a second quest with even more cards to collect. Even if it leaves a lot of the United States untapped, there's still a lot of content in Ironclad Tactics. 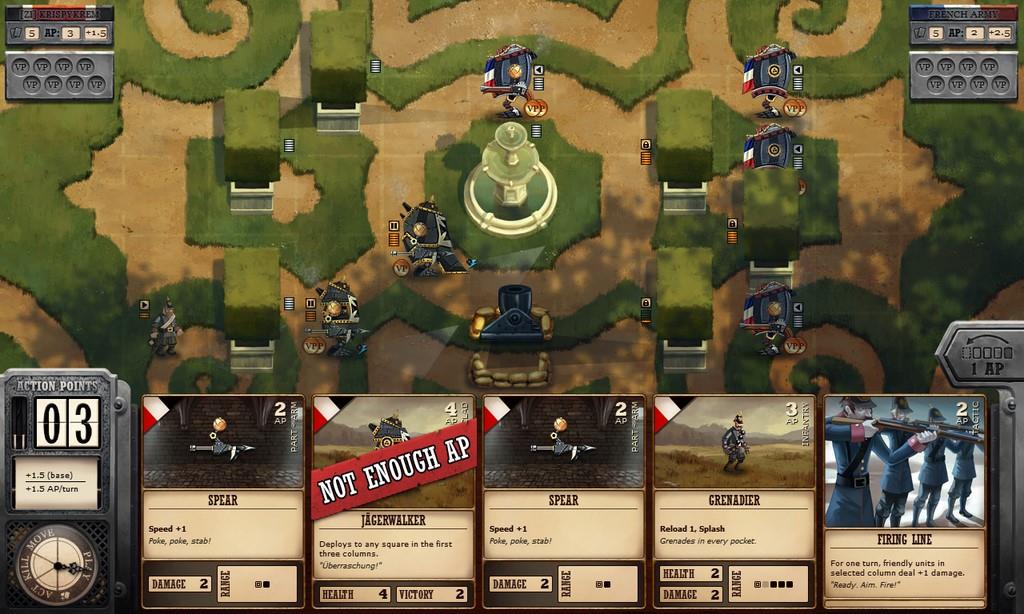 Despite being won over by the game's quirky charm, I did run into a few inconsistencies along the way. For starters, the difficulty is all over the place. Some stages are so easy that it sometimes feels like it's impossible to lose, while the very next stage will be frustratingly difficult. I'm used to a learning curve, but the frustrating stages seemed to pop up randomly.

The game's controls don't help. It's clear that Ironclad Tactics was designed with a mouse and touchscreen in mind, so playing the game with a clunky controller feels like a downgrade. That's not to say the D-pad and face buttons can't get the job done, but this game feels like it would be better suited for the PS Vita.

Zachtronics' newest game isn't going to push your PlayStation 4 to the limits, but it does offer a fun alternate history story and addictive combat mechanic. Although it pulls influence from a number of familiar sources, I've never played a game quite like this one. From the competitive elements to the endlessly goofy cards, Ironclad Tactics has enough charm to win over even the most jaded gamer.