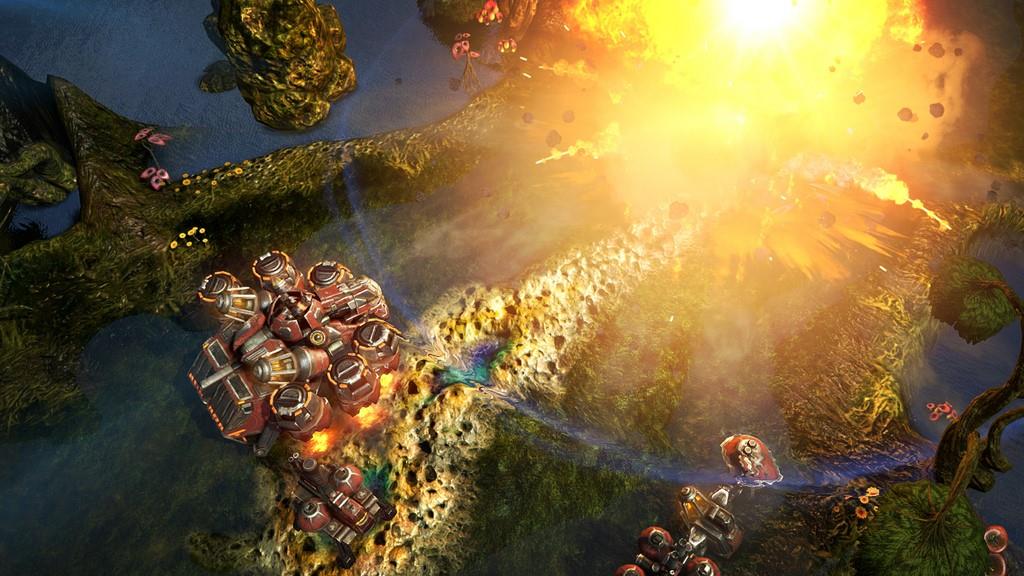 While there have been plenty of real time strategy games released in the last decade (several on the indie scene, in particular) not many have taken the multi-faction science fiction setting. The reason for this is obvious: Blizzard and their ludicrously popular Starcraft series, despite having only two major releases in the past 20 years, continues to all but monopolize scifi RTS. Petroglyph Games decided to challenge this dominion with a fresh entry into the genre, Grey Goo.

It turns out Petroglyph is uniquely qualified to tackle this challenge. Their studio was founded by some of the last holdouts of Westwood Studios before EA absorbed and shuttered the venerable developer. Westwood of course was responsible for the Command & Conquer franchise, Starcraft’s only strong competition back in the day. If anyone was going to make a bold entry into the RTS playing field, it would be Petroglyph.

Grey Goo is named after the hypothetical scifi catastrophe where a mass of nanites gains sentience and begins self-replicating exponentially, devouring everything in its path. In the fictional future of the game’s plot, humans accidentally created such a catastrophe and it escaped into space. Centuries later, as humans are exploring the galaxy and come into conflict with the alien species known as the Beta, the nanites return and wreak havoc on both factions. The besieged humans and beta put aside their differences to combat the encroaching Goo, but soon learn of a greater threat.

The story takes some novel twists and turns toward the end that breaks from the typical resource-driven, “construct additional pylons” formula of the average scifi RTS. It helps that the plot is told in jaw-droppingly gorgeous pre-rendered cutscenes, which some particularly strong voice acting and a cool fictional spoken language for the Betas. My only issue with the voice acting is that once you get into the gameplay, the Betas all speak with South African accents, which is a little funny. I guess I have an old gripe with RTS. They pump so much development budget into telling the story and less into the rather stale, paint-by-numbers gameplay, that they should just be cool scifi movies to begin with. But I digress. Grey Goo at the very least has a well told story and an instantly memorable setting and premise. 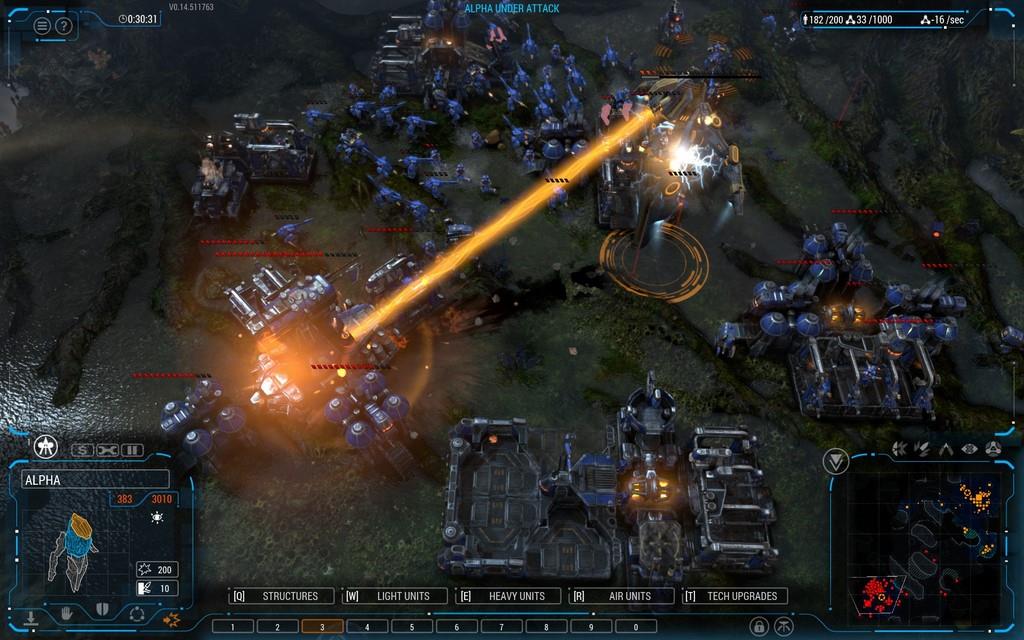 The premise of course sets up the three playable factions—human, Beta and Goo—and naturally each one plays differently than the others. You start as the Beta and ultimately they’re the most “normal” by RTS standards and are probably the most balanced. You can set up bases and attach modular structures to them—factories, resource miners, silos and the like—and as your troops push back the obligatory fog-o-war you can place new bases along new resource veins and generally expand your makeshift empire. There’s only one kind of resource in the whole game, which simplifies things, so expansion can follow a natural progression as you follow the resource deposits.

Humans work a little differently. Their bases must be connected to a sprawling power grid. As you build and expand, every structure must be connected to this grid. It’s pretty handy in that you can instantly teleport any structure to any point on the grid, but this mechanic is a real double-edged sword. If just one section of the grid is knocked out, the entire base loses power until that section is repaired. It also means that you can’t just expand as your tactical units push forward; you have to lay down long tracks of power conduit before you can build any expansions to your base. The pick-up-and-go expansion of the Betas just isn’t available to the humans. This severely limits the kind of bases you can build to how flat and open the terrain is. The humans probably have the most distinct disadvantage to a novice player.

The third faction is of course the Goo, and it’s definitely the most unique and ultimately most challenging faction to play. The Goo is entirely mobile—it doesn’t need air units to traverse the terrain, but can simply slither over mountains, ravines and other obstacles. You start out with one “mother Goo” that oozes around the arena and sucks up resources, spitting out infantry units and other various soldiers as it goes. This makes the Goo highly versatile, especially as you begin splitting off and forming multiple mother Goo masses, but it’s easy to get complacent, get cornered and subsequently blown to pieces. Succeeding as the Goo is all about staying mobile, hanging back and letting your small units soften up the enemy; then you can ooze in and hoover up the weakened enemy units, dissolving them and using their materials to fuel your own expansion. 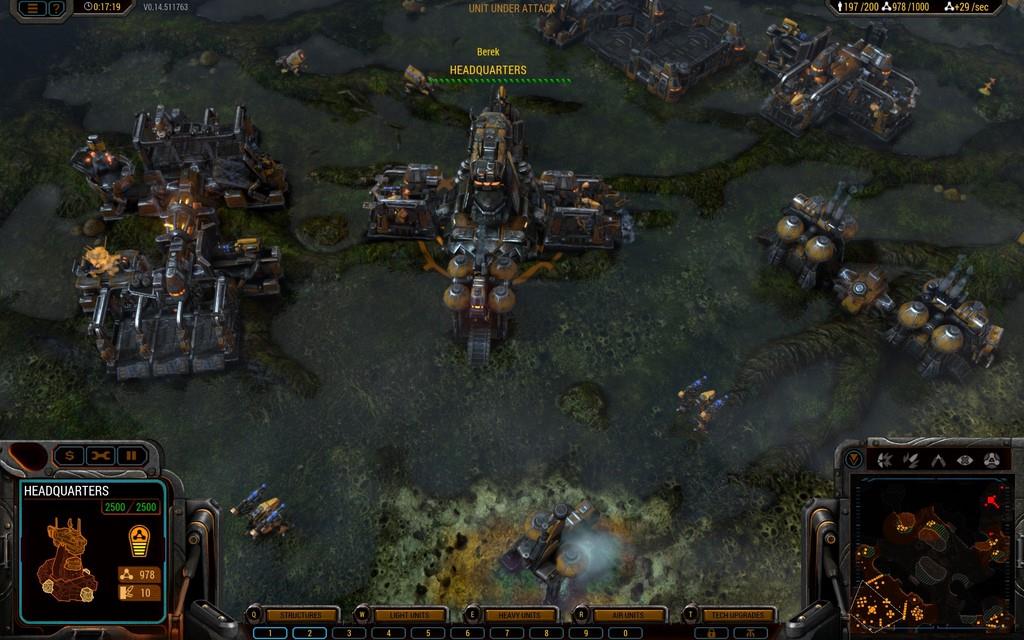 An RTS is only as good as its interface and luckily Petroglyph does a pretty good job here. The UI is simpler than Starcraft but it still took me some time to learn the ropes, being a total RTS novice. The interface isn’t built on endless hotkeys and micromanaging but a series up pop-up menus that condense all of the basic functions of a unit or structure into one hotbar. This collection of hotbars is divided into five categories: structures, light units, heavy units, air units and tech upgrades. All of this can be navigated with the mouse but each bar lists the hotkeys it uses so at a glance you can easily train yourself to micro on your keyboard. Base-building is the main focus here with only a few crucial options per structure, such as auto-building specific tactical units or replenishing resources from a nearby well.

In terms of production values Grey Goo looks on par with other current-gen RTS offerings. Both the humans and Goo have very distinct visual designs, although I was a bit disappointed in the generic industrial aesthetic of the Beta. As a species they are really cool looking, I just wish their technology was more distinctive. In general I wish the gameplay looked as gorgeous as the cutscenes, but that’s a problem I have with the RTS genre as a whole. The music is a real standout however, with longtime Westwood collaborator Frank Klepacki returning to score the game. If Grey Goo’s music reminds you of Command & Conquer, well, now you know why!

Overall I enjoyed my time with Grey Goo, and as one of the few fresh RTS ideas on the market right now I hope it cultivates a loyal community. That said I’ve never been a huge RTS fan so I don’t have a lot of perspective on this release or where it fits in its respective genre. All I can really say is that it’s a quality release that definitely knows its heritage. It doesn’t completely break the mould but it does offer some new ideas. It’s good to know that Westwood’s reputation and vision live on in a new franchise.

Grey Goo isn't a paradigm shift but Petroglyph still really know what they're doing when it comes to RTS. They introduce some clever new twists on the formula and tell an intriguing story in the process. For anyone wishing for a spiritual successor to Command & Conquer, Grey Goo is definitely it.