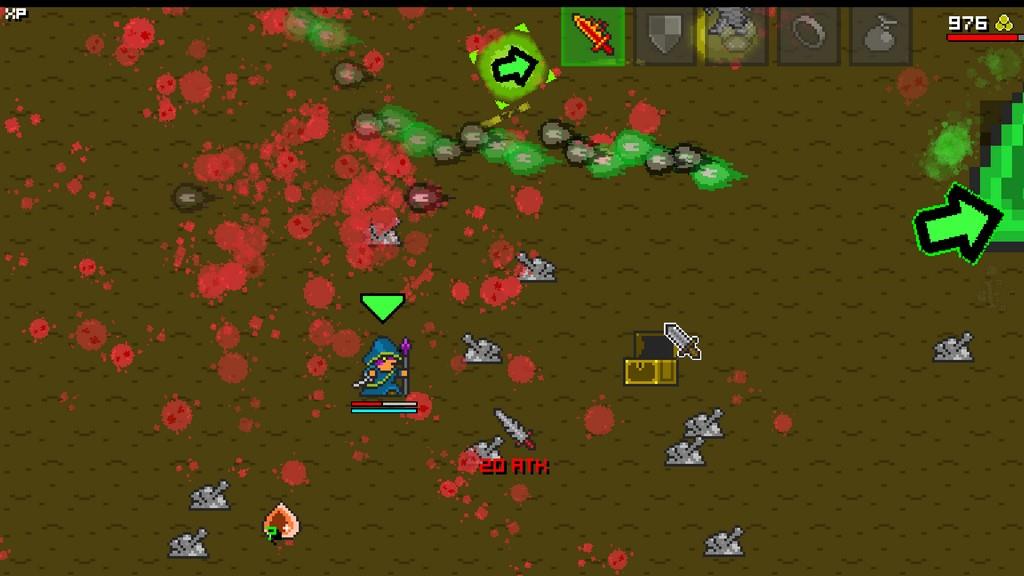 It never ceases to amaze me to see the genre-mashups that developers come up with.  A lot of them seem like no-brainers, like rhythm / music based fighting games. The concepts make sense and don't really surprise you when they go well together. Then there are those that are so off-the-wall that you can't imagine them working, like pinball and role-playing, then end up being pure gold. Two genres that I never would have thought to put together were the twin-stick shooter and roguelike exploration. Black Shell Games seems to think that these two would work perfectly together, and they prove it with Overture.

At its core, Overture is a traditional roguelike adventure game with 16-bit pixelized graphics. Using procedurally generated dungeons, you’ll pick a character from a variety of classes and head off in search of as many riches as you can fill your pockets with. These floors aren’t necessarily ripe for exploration, as they all consist of wide-open, flat planes with only the visual makeup and enemy assortment changing over time. You won’t have to worry about dead-end corridors or getting lost in maze-like caverns. The goal is to eliminate everything moving on the floor, including the level’s sub-boss and then head to the boss’s lair.

What is different however is the control scheme that the game uses. Regardless of the class of character that you choose (which I will explain here shortly), all of the characters feel like they have been ripped straight out of a twin-stick shooting game. You can control their movement with the W, A, S and D keys while aiming with your mouse; this makes it possible to attack in any direction regardless of which way you are moving. It feels pretty good with a mouse and keyboard setup but I found myself wishing that they game had gamepad support. I would imagine things feeling even better with two analog sticks like Geometry Wars or Super Stardust.

The enemies attack you in what often seems like never-ending hordes. Do you remember how the enemies flowed in the original Gauntlet games? It is a lot like that they come at you from every direction. Taking them out, which is usually pretty quick and harmless, will result in them dropping some sort of loot and giving you a little bit of experience. Loot can range from gold which is used to rank up your hero’s starting attack level and unlock additional characters to health / magic potions, and equipment. The experience counter applies solely to the game instance that you are playing and will be reset once you die. The levels that you increase through spending gold however are permanent. 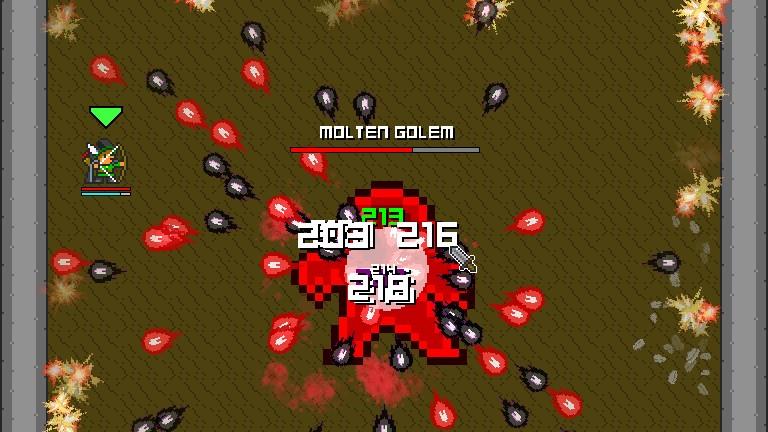 While the loot is abundant in terms of its quantity but not in its variety. Don’t expect a ton of variety in the equipment category as things remain relatively basic as you fill in each of your character’s five equipment slots. Each item simply raises or lowers your various traits such as defense, mana regeneration, and power. Weapons will often include an additional trait that alters your attack such as causing additional poison or fire or even raising dead enemies to fight on your behalf as skeletons.

The only other thing that you will find aside from loot throughout the dungeons are crates containing non-playable characters. Opening a crate places a NPC in your party to fight alongside you. These characters are relatively weak and die off pretty easily, but can often turn the tide of battle in your favor even if they only serve as cannon fodder. You can have up to three fighting alongside you at any time although there will be plenty more crates than that scattered around the screen. 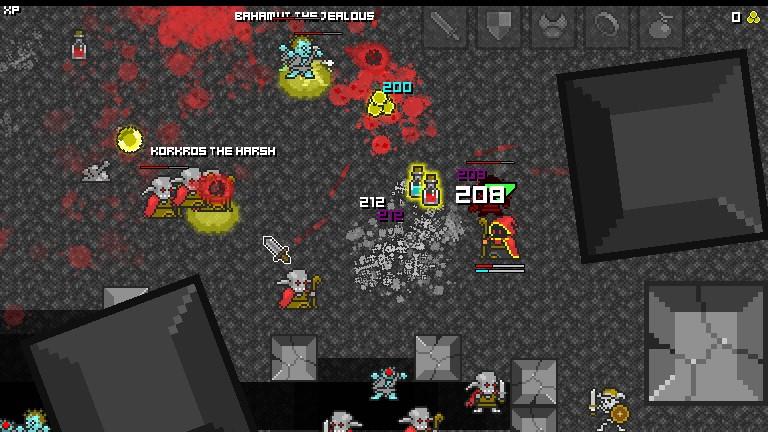 There are a wide variety of character classes to choose from, although they all feel relatively the same. There are four base classes (warrior, rogue, mage and shaman) with six sub-classes under each. The difference between them is really just their attack range(s) and assigned magic attack(s). The warrior class has a relatively short range, even though it is still farther than your standard melee and feels like a short-range projectile. The other classes have varying distances with projectiles. If there is one part of the game that really begs for improvement it is definitely with the character class variation. All equipment and weapons work with all of the classes, so there really isn’t much of a reason to pick one over the others, unless you grow to prefer a specific type of attack.

Overture is extremely fast paced, chaotic and a ton of fun. Sometimes, however, that works against it rather than being in its favor. When things get to be their most hectic, it is nearly impossible to read your character’s health or mana status and sometimes your party can simply get lost in the mix of action. It really does have that twin-stick, “just one more game” type of feel where you constantly find yourself going back for one more run which is why I still find myself going back in time and time again. The game just ends up feeling a bit shallow in the end of it all and I find myself wishing that it had a bit more depth. I really look forward to seeing what comes of this game and a possible sequel in the future.

Overture is a great idea with decent execution. The groundwork is certainly laid here for a new take on the roguelike genre but there is still a lot of room for improvement and expansion.