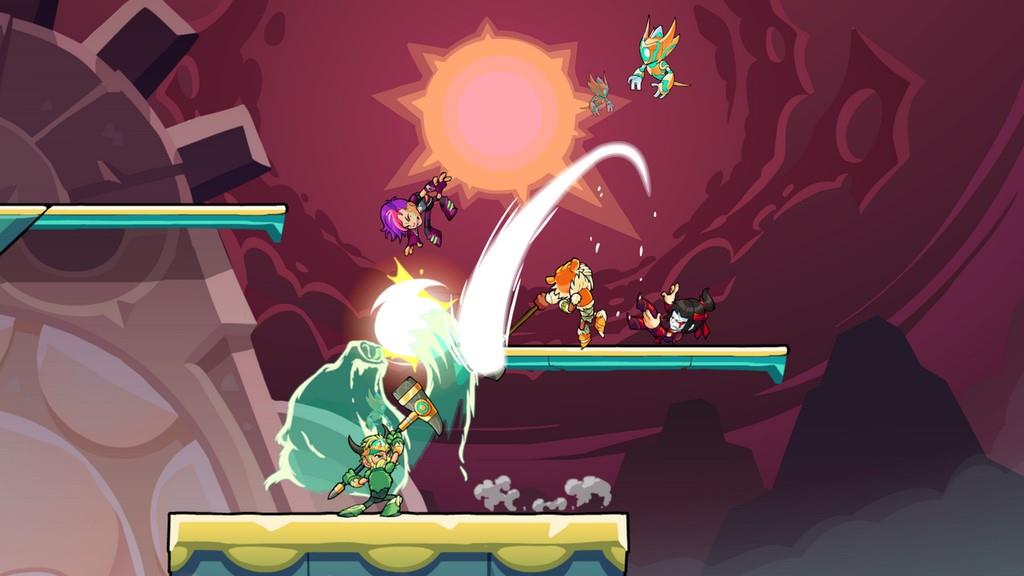 It’s no secret that the Super Smash Bros. series is hugely popular, especially with the release of Super Smash Bros. for 3DS and Wii U, the latter of which is probably one of the best outings in the series.  Sadly it’s only found on Nintendo systems (yes I know, it’s full of Nintendo characters, so of course it’s only on Nintendo systems).  Other games have tried using a formula similar to Smash Bros. such as PlayStation All-Stars Battle Royal and Digimon All-Star Rumble on the PlayStation and Xbox systems, but nothing for PC that I’m aware of.  That’s about to change with Brawlhalla.

Brawlhalla, simply put, is akin to Smash Bros. lite for the PC.  Not literally of course, that would be too awesome and too impossible.  In Brawlhalla you choose from about a dozen different characters, each with their own stats, then battle it out Smash Bros. style.  In the upper-right corner of the screen you’ll see each character’s portraits along with a number for either points or stock remaining depending on the rules for that match, as well as a colored circle.  The circle starts out white, then goes to yellow, then red.  Once it’s in the red it’s very likely that one strong attack will send you flying off into the distance.

As with a lot of fighting games you have your standard Arcade Mode in which you go through three 4-way matches with the top two from each match moving on until the finals (then it’s winner takes all), Couch Party which is what they basically named their exhibition mode, Online Mode which basically puts you into a random online match, Custom Online Mode where you create your own online games, and Training Mode which is…well, training.  You also have multiple stages you can play on, but I noticed that the stages seemed rather small for a four person brawler and were usually made up of a couple platforms/structures to stand on with a gap in the middle.  Not bad really, but bigger stages would have been nice.

Before I go on there is something to bring up.  The version of the game I played for this review is listed as being a beta/early access version.  As such, some of the things I’m commenting on my change in the final version.  Gameplay is very similar to Smash.  You have normal attacks and smash-like attacks as well as items to pick up.  One thing that disappointed me was the lack of items you can pick up.  You have bombs, mines, spiked balls, a horn that’ll summon some sort of creature to sweep the screen along a line, and weapon pickups.  When you choose your character you’ll notice two icons next to their stats.  Those are the types of weapons that character can get when you get a weapon pickup and the weapon you get of those two are random.  For instance, the character I tend to go with, Lucien, can find either a pair of katars or a pair of pistols.  If another character drops one of their weapons you can pick it up, but you can only get one of your own weapons from an actual weapon pickup. 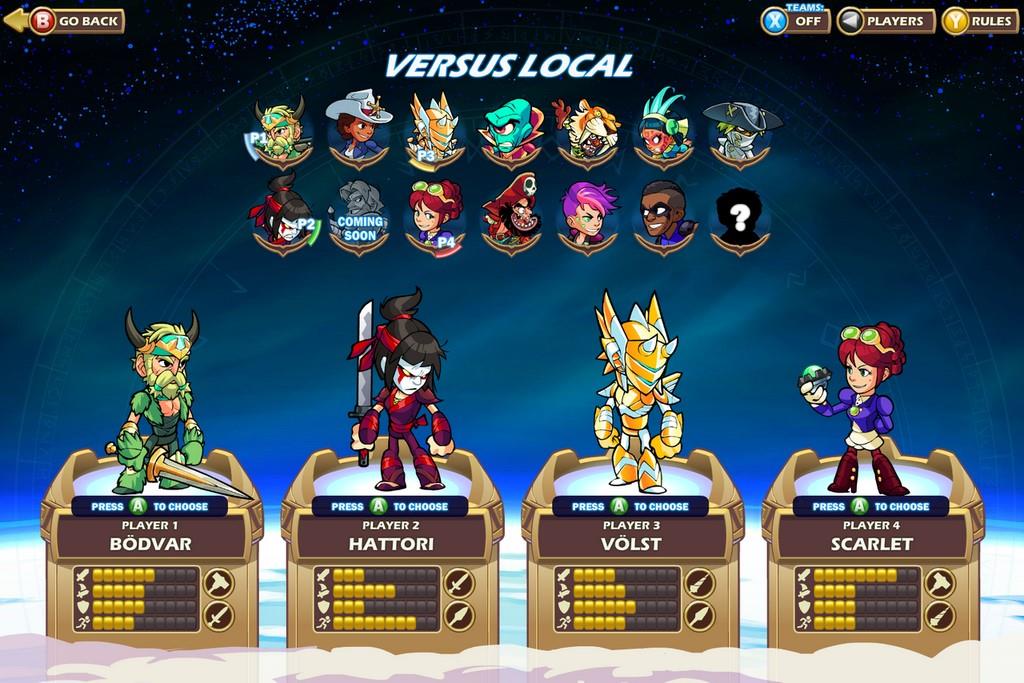 In terms of the actual feel of the gameplay, it plays pretty smoothly.  It is definitely worth going into training though and work with a couple of characters to see what they’re like.  With Smash Bros. you know the characters going in and for the most part you know how they’ll play, even if you’ve never touched a Smash Bros. game before.  With Brawlhalla I picked a character, played around with him in Arcade Mode, and within twenty seconds I killed myself by doing a dive kick off the arena doing a simple downward attack and for some reason I couldn’t double jump back onto the arena.  Definitely worth going into training for a bit with the characters you want to try out.

I did a couple of online matches and aside from getting a beat down like no other, online play was issue-free.  Now again this is the beta/early access version so your results may vary, but getting into a match was easy and the gameplay itself had no lag whatsoever.  This I’m not surprised at because unless your company is Nintendo, online play shouldn’t be an issue in this day and age (though Nintendo is getting better by leaps and bounds).  When you create your own custom online game you’ll see a game number under the game’s settings towards the top of the screen.  Anyone can join a game by typing in that number when joining a game (as opposed to just going into a random game).

When you setup a game either locally or online, you can choose several options to customize the game such as whether you want teams (red or blue, sadly you can’t do one-on-one-on two matches), whether you want a timed game or a lives game, the amount of time the game will last, and if you want gadgets on or off.  You can’t choose to turn off individual gadgets, but considering how few there are in the game it’s not that big of an issue. 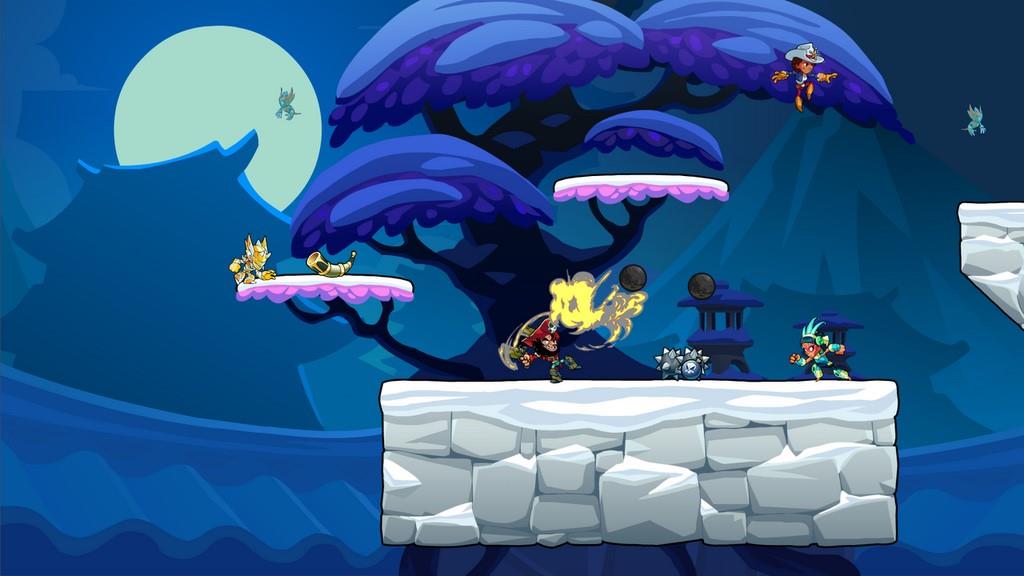 There is one more thing to talk about and that’s customization.  Sadly there isn’t any it seems in the beta, but after you choose your character you can choose a couple of customization options including weapons.  However, it doesn’t seem like this version has any way to unlock different weapons (or characters for that matter), so you’re stuck with your default weapons.  On the main menu there are also two options greyed out: Legends and Missions.  I’m guessing Missions will be similar to Smash Bros.’s, single player where you take on different characters one-on-one or just do a variety of tasks, basically having more emphasis on just playing alone and not having to do a typical exhibition match.  Once the game is fully released I’ll try to update this a bit with that those options do as well as how to unlock characters and weapons.

That’s about it for Brawlhalla, at least until the full game is released.  For a Smash Bros.-esque game on the PC it’s actually quite enjoyable once you get the mechanics down.  I would have loved to see more items other than the few we get, but I’m guessing that the reason there are so few is because of the different weapons each character can get from the weapon pickup items.  Online play was a smooth experience other than getting pounded on by my opponents, but that’s just due to my lack of skill with the game.  Right now the Founder’s Pack can be purchased for only thirteen dollars which gets you early access as well as an extra character to play as and I’d say that while there are some things that could be improved, this would be worth thirteen dollars.  If you’re looking for a PC game similar to Smash Bros. that will entertain you and your friends, this is it.

Even though it’s still in beta/early access, Brawlhalla is a good answer to a Smash Bros. style game on the PC.  While the limited number of items didn’t bring a lot of variety to the matches and it mostly came down to using a character’s specific weapons, the gameplay was smooth including online which is to be expected today.  If you’re looking to get your Smash Bros. fix on the PC, this is worth checking out and hopefully the Missions and Legends options will be enjoyable once the game is fully released.