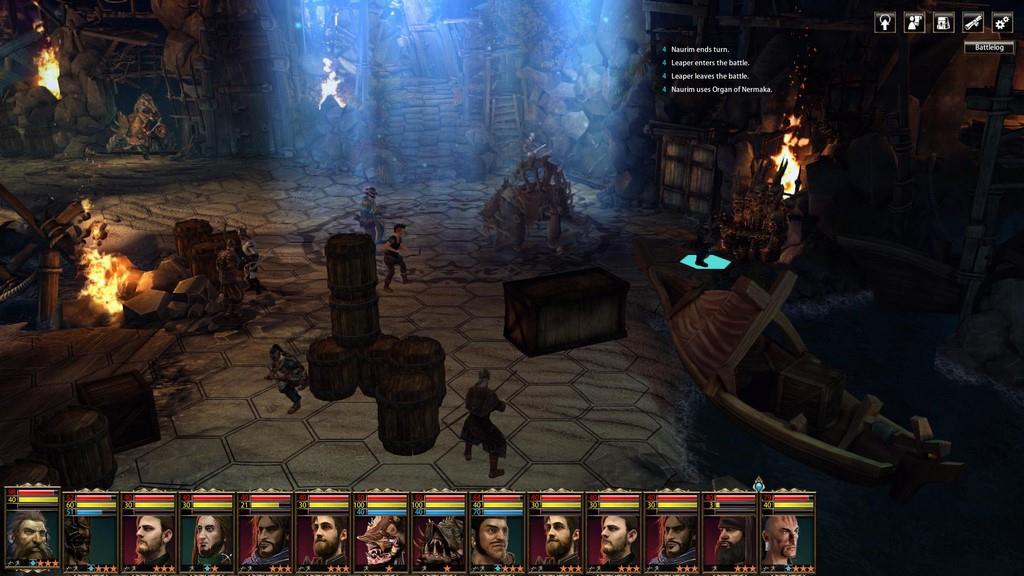 Blackguards 2 follows in the footsteps of its predecessor by trying to push the narrative of the anti-hero, and this time, I think it hits the mark. The main character is Cassia of Tanos, a nobleman's trophy wife thrown into the labyrinth beneath the gladiatorial arena because... well, we really don't get a lot of the why. Actually you'll learn a lot more of the why from watching the third of Daedalic Entertainment's new characters and features videos than from the opening cinematic or most of the game itself. There is a decent story here, but sometimes it feels you have to pry it out of the creators' steely grip to get at it. What they do present well is the character study of a woman driven to madness and revenge, and I'm buying into that. There is a darkness to Cassia that is explored and developed well and revealed in a way that allows the player to be sympathetic to her madness without being forced to embrace the evil.

Look, the tale of how Cassia of Tanos becomes Cassia Corpia, amasses and army of mercenaries, and marches on the Shark Throne isn't Shakespeare, but it is a lot more than the drivel a lot of studios are pushing out as backstory. Cassia is flanked by three other 'anti-heroes' and while they have personalities and stories of their own, none get fleshed out as completely or are as compelling as Cassia.

Also none are as open ended in their class progression. Cassia feels from the start that she is a character you can mold to whatever playstyle you prefer. From the first maps wandering through the labyrinth, you have access to ranged and close quarter weapons, spells, and the whole skill tree to spread a generous amount of experience points around. The pace of progression pumps the breaks after these first few battles, but it gives you a jump on crafting the woman into the mad little maniac you want her to be. The other characters, though, not so much. You've got your spell casting mage, stout axe-wielding dwarf, and an agile spear fighter than can bound across the map. While much of the skill tree is open to each, deviating from the more linear progressions of these characters just seems like tying one hand behind your back rather than any kind of freedom. While I could mold Cassia, I found myself sticking to the archetypes for the rest of her band of mercenary men.

Once the pace picks up and you're rolling across the world map capturing cities and fortresses one battle at a time, you'll find yourself back at camp in between skirmishes pitted against a moral dilemma of how to treat prisoners, slaves, or informants: cut off their tongues, kill the lot rather than pay to feed them, set them free? Your choices will effect your future, as freed captives can return to the frontline to boost your opponent's numbers in the next battle or choosing the right interrogation technique can unlock information and rewards. 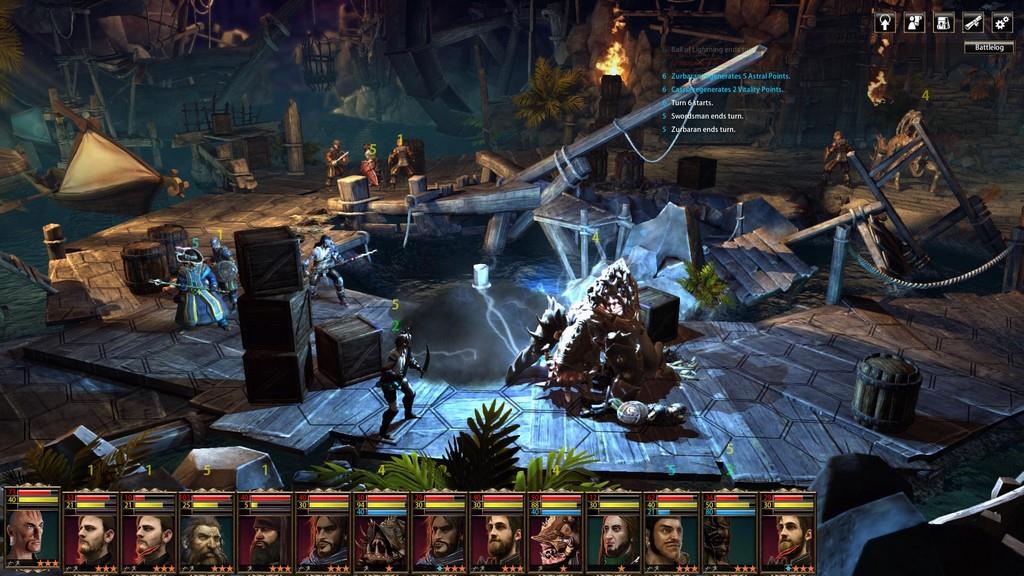 The game is paced well enough. You are eased into the mechanics of the game in the early rounds as you fruitlessly navigate Cassia through the labyrinth and observe her descent into madness. Each new map presents more of the mechanics, introducing working with a squad, utilizing your surroundings, placing traps, and so on. Once you free yourself and the game begins in earnest, battles will tend to drag on, each taking 20-30 minutes with no option to save until it is concluded. This commitment gracefully saves the game from any sort of "one more turn" phenomenon as one more turn could take the better part of an hour before you have a chance to save your progress again, but there are also times with a single enemy left on the field that you'll wish for a mechanic to more quickly skip the half dozen soldiers commands that are out of range of the killing blow to finally complete that endgame slog.

The presentation of Blackguards 2 is excellent. Every interaction is voice-acted. Even the towns and camps, while just glorified menus, are beautifully drawn and presented. The spells animations and attacks are well done. There is decent range of enemies to fight, including monsters which require a healthy dose of strategy beyond just advancing troops and hacking away. The maps are varied and interactive: pull down the stack of boxes for some makeshift cover to slow a pursing enemy. Launch a fireball at those same boxes and they'll burst into a wall of flame becoming an environmental for any who dare tread through. Lower that drawbridge or open that prison cell door to pave the way for reinforcement troops. Snap the line holding that chandelier in place and watch it trap all below in the rubble. 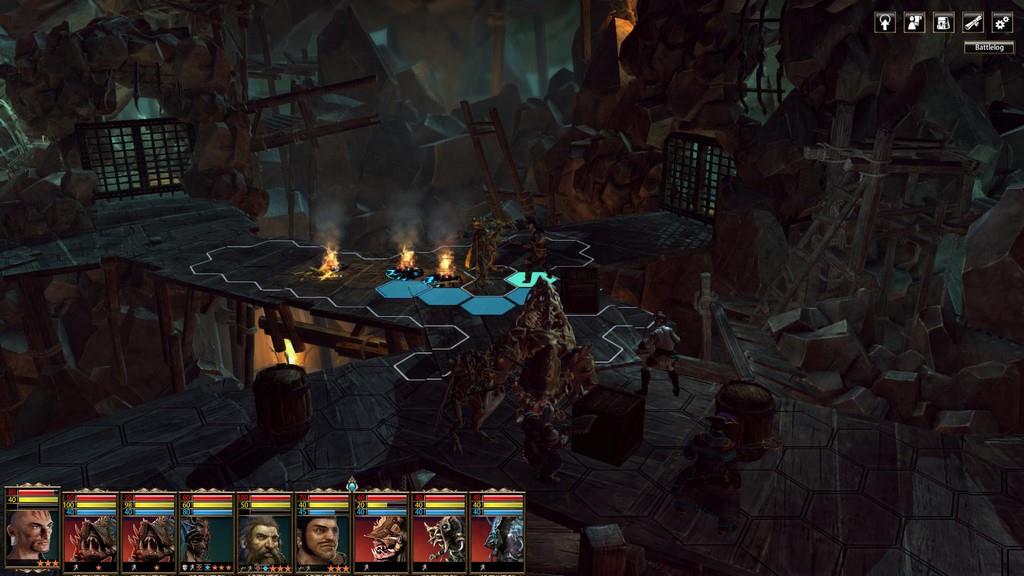 Also, a lot of the more frustrating elements of turn based strategy games are handled well. Hit percentages are displayed for every potential attack so you don't feel cheapened when your archer misses the target they only had a 30% chance of success to hit, and you know that the killing blow will land when that 100% floats at the mark's feet.

There is a bit of micromanaging in the leveling up of your heroes and equipping them for war, and while there is depth to be found in the minutia of moving weapon scalers back and forth, it is also pretty easy to gloss over all that, blow all your XP on a few new spells and skills, and just get on with it. Also, it would be nice if the camera had a little more wiggle room to rotate. The battlefields are wonderfully animated but the camera is fixed. Maybe those two are mutually exclusive in this context, the wolds is so wonderfully drawn because the artists aren't fighting a rotating camera, but must they be? You can pan left to right and get in closer or back on up, but you are always fixed facing the same cardinal direction. The mouse's scroll wheel does move the camera incrementally from a side angle to a top down view, but there are some tight spots that swinging even to just an ordinal direction would have been very beneficial.

I enjoyed Blackguards 2 very much. I thought Cassia was really something different and believe the developers did a great job in getting me to invest in her character, even if she was insane and evil. I really appreciated the delicate little touches to the dialogue, artwork, and presentation that prevail throughout the game. This game was well thought out and Daedalic Entertainment took the time to flesh it out in to the same standard. There is nothing groundbreaking in the battle mechanics, but it is engaging and the different ways certain characters can interact with the terrain offered enough strategy to satisfy me.

Top notch presentation and a compelling main character really set Blackguards 2 up to deliver a solid tactical strategy RPG. Everything about the game, the weapons, abilities, characters, and options are varied enough to keep things interesting but simple enough not to get lost in the tedium of micromanaging a party. It is not without its flaws and the battles can sometimes bog down, but it is a good experience to play and uses a wide cast of allies and enemies well. If you're interested in experiencing a story that isn't just the standard fantasy lore, then Blackguards 2 is worth a try.