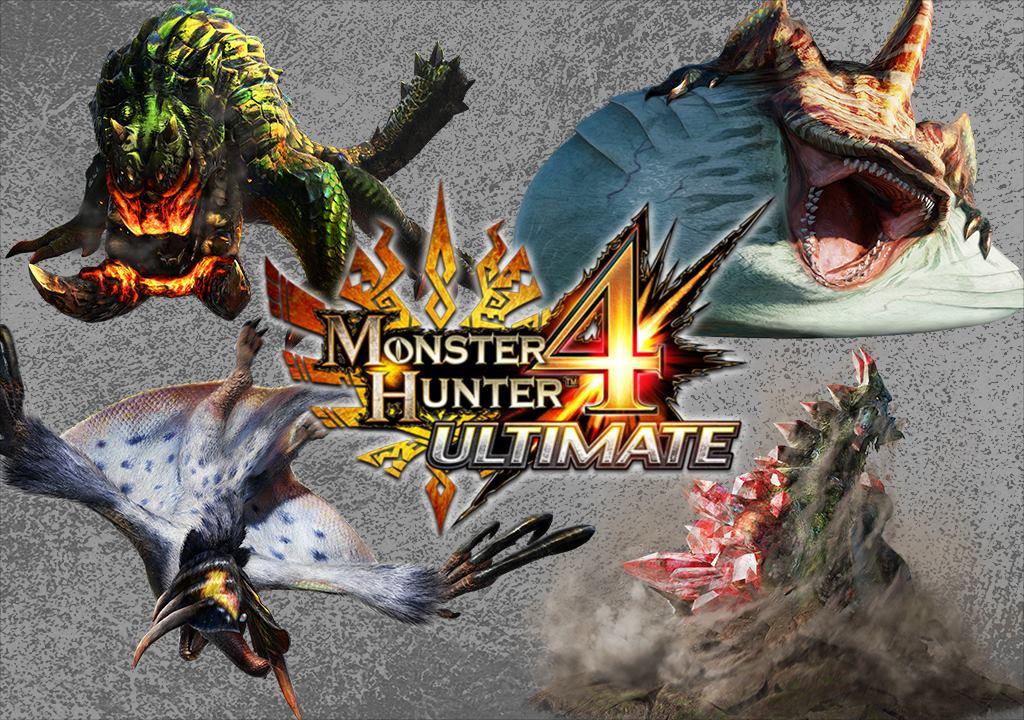 Monster Hunter is a series I have been interested in for quite a long time, but have never played, other than just a few minutes of Monster Hunter 3. It's a game that sounds nothing less than epic. Centered around hunting large, intimidating monsters, Monster Hunter 4 takes you through many vastly different areas to fight many vastly different monsters, so that you can gather their bones, hide, teeth, and the like, and use them to make new weapons and armor. It's a fairly basic premise, but a good platform for lots of intense fights with assorted behemoths and leviathans. A lot of the game is great and works well, but unfortunately it is massively hindered by the fact that it's damn near unplayable on the 3DS.

The game opens with an extremely impressive and exciting sequence that takes place on a ship sailing through a sea of sand. You're under attack by an enormous sand whale/worm/thing that is chasing you as you try to make it to port. Right away the game shows you what incredible production values are in store for you; the pre-rendered cutscenes of the monster breaching from the sand were exhilarating. These cutscene standards last the entire game, but unfortunately, the problems appear within the first moments you gain control of your character.

I'll just cut to the chase with this: the camera is almost impossible without the second analog stick that comes with the next generation of 3DS, or is available for purchase separately. While this is really frustrating, and to me having to upgrade hardware almost entirely defeats the purpose of playing on a console, it is not really the fault of the game I suppose. It's clear from the very beginning that this game is meant to be played with two analog sticks. It tries to provide you with a few alternatives to get around not having the second stick, but none of them really work. There's a control pad on the bottom right touch screen that you can use to move the camera, but having to use the stylus like your second thumb on this control pad is even clunkier than not using it at all. The best workaround I could find was using the left trigger to center the camera behind me constantly, but even then it's hard to get your character facing the exact right way with only one stick.

The problems go deeper than just the lack of a control stick however, because the camera isn't the only part of the game with terrible controls and an extra stick would not fix everything. The combat is the most frustrating aspect of Monster Hunter 4, which is terrible because clearly combat is supposed to be the cornerstone of the game. The attack animations are all extremely slow, and there's no way to cancel them. What this means is that most of the time, attacks will miss because of the terrible camera, and then it takes a painfully long amount of time for the attack to be over so you can re-position yourself in a different direction, only to more than likely miss again. It's not just the attack animations either. Every time my character drank a potion, he felt the need to do a strongman pose for a few seconds that left me open for attack. I usually had to leave the area during the bigger fights in order to use items so that I wouldn't get attacked during the animations. Add in the fact that most of the monsters are very fast and can do very high damage to you in only a few hits, and combat becomes high risk but very low reward. 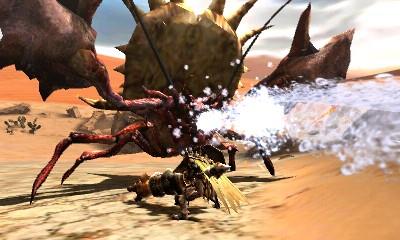 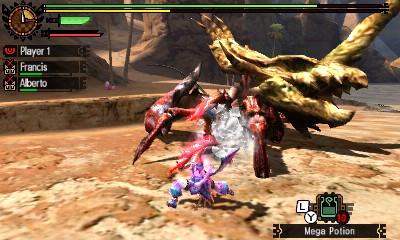 This is particularly true of the fights against the big, boss-level monsters. What should be, and is obviously intended to be, the bread and butter of Monster Hunter 4 was my least favorite part by a long shot. These fights took upwards of 30 minutes every single time, usually even more than that. 30+ minutes of frustrating controls, whiffing attacks, and running away to use items. In what was easily rock bottom for me during my time with the game, one of the more difficult bosses killed me in one hit after 40 minutes of fighting. I lost all of that time and had to go back and fight the monster again. Sometimes in other games, this punishing difficulty is fine, such as with Dark Souls. But I never felt like any of the difficulties or deaths were my fault; it was always the controls preventing me from doing what I intended to do.

However, a lot of this changed when I went into the multiplayer component of the game. It became clear to me, after my team of four killed a boss in 7 minutes that had taken me 35 minutes alone, that certain parts of this game are meant to be played with a team. I'll gladly admit it was really fun too; the added strategic elements of combat with three partners both softened the blow of the difficulty and made the fights infinitely more interesting than using the same attacks for half an hour by yourself. I was really taken aback by how much I enjoyed a part of the game playing with other people that I hated by myself. So, keep that in mind if you seek to hunt monsters: fight the big ones with friends.

Aside from the truly awful controls, most of this game is actually really well designed and put together. The crafting system, which is sort of the skeletal structure of progression in this game, is great. You use pieces of the monsters you kill to build an incredibly vast amount of different weapons and armor with tons of different status effects and skill bonuses. There is no traditional leveling up in Monster Hunter 4, instead all of your abilities come from the equipment that you craft. The developers did a great job with making the weapons all function very differently too, which is impressive considering the aforementioned problems with the controls. All the weapons have different types of attacks, different speeds, and different movesets that encourage players to use more than one or two weapons, depending on what they will be up against. 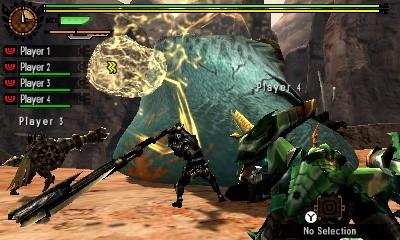 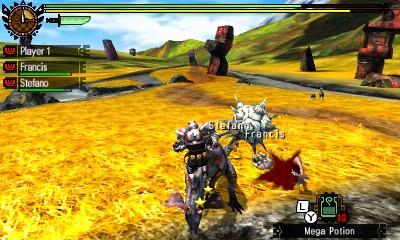 The monsters from which you harvest these materials are all extremely varied and well designed. I was very impressed by how well the game avoids feeling contrived with it's creatures. A lot of the monsters are creatures I have never seen before at all, but all of them are at least very original variants on popular monster formats, such as bugs and dinosaurs. The most interesting creature I fought was an ice shark that one of the people from Capcom I played multiplayer with called the "Marshmallow Shark." The shark started off as a four legged land shark with ice crystals armoring parts of its body, but once you did enough damage it blew up to massive size like a puffer fish and began to roll around the arena. Most boss creatures change attack patterns throughout the fight; there's no health bar for any of them, so you have to use the subtle and well thought out visual cues of when the monster starts limping, or is suddenly unable to spit fire any longer to see when you're starting to wear it down. Nothing in the game holds your hand, which I really appreciate.

Environments are also extremely well designed and varied. Each environment consists of around 10 smaller areas within the larger environment that are different little ecosystems almost. Different monsters live within each section, but all are unified by a common theme. The areas can range from open plains to mountainous peaks, and from volcanic rivers to icy islands. The environments were my favorite part of the game, and I always enjoyed exploring the next section and learning the specifics of each piece.

The game also has a very pleasant, self-aware sense of humor. Early on, one of the characters says that something needs to be done "slooooowly... how many o's are there in slooooowly again?" The occasional breach of the fourth wall is always amusing, and the humor is always charming.

There's really a lot to like with Monster Hunter 4, but the great aspects of the game are crushed beneath the monumental weight of it's frustrating gameplay. While some of this pain is eased by the multiplayer, it isn't enough to make up for the fact that the game just shouldn't have been released on the 3DS. This is a console game trapped in a handheld body, and it's really a shame that a game with so much potential is limited by such small but ever-so-important design problems.