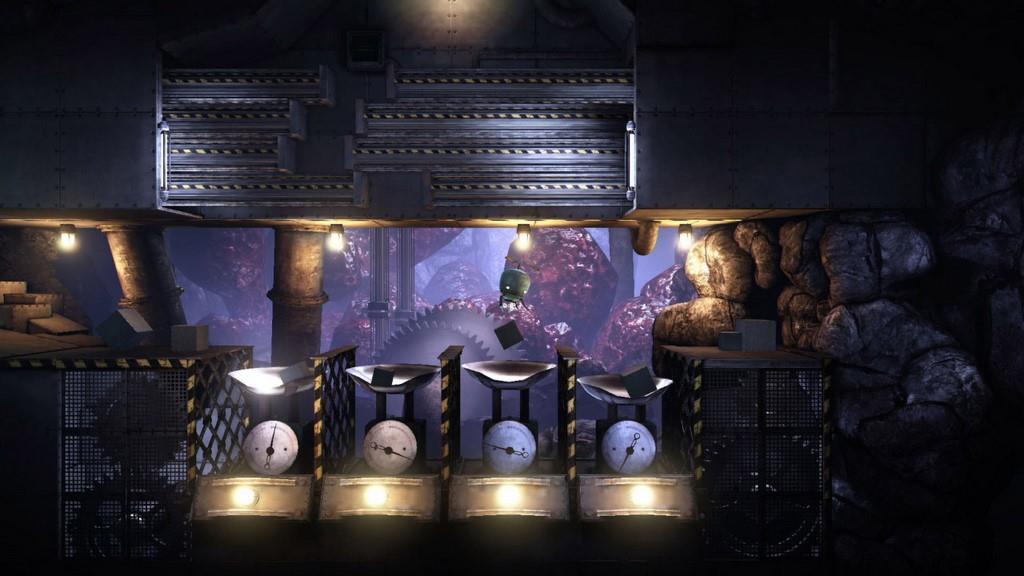 Written by Nathaniel Cohen on 2/26/2015 for PS4
More On: Unmechanical Extended

I don’t want to live in whatever nightmare universe Unmechanical takes place in. It’s a dark and scary place filled with unknowable hazards, beings with completely opaque motivations, and it exists in some technological stone age that I find profoundly disturbing. In my attempt to seek meaning in the game’s events or, at the very least, fit the setting and circumstances into some nice neat box that reflects 21st century America’s social, political, and technological values, I am imagining a future where humans have transferred their all consciousness into machines. Unfortunately, to me, it happened some uncountable number of years before the events in Unmechanical. In the intervening time, some catastrophe has befallen society and broken the chain of forward progress. Time has fallen backwards. Our triumphant conscious machines have become little more than barely functional blobs held aloft with cobbled together parts. They’re surrounded by the ruins of technology they barely understand. In some cases, it’s broken. In others it’s dangerous. Their lives, such as they are, have become meaningless and dreary. They flit around the surface of their homeworld in small family units driven by some half-forgotten memory of a past where something other than survival was important. If that’s not bad enough, occasionally the surface opens up and swallows a son or daughter, a parent, a best friend and you have no recourse. They’re just gone. It’s very different if you’re the one who has been swallowed. You are deposited into an environment filled with obstacles you must bypass using your wits and simple energy magnet.

It’s robo-Alice in techno-nightmareland and we’re all the way down the robot hole. Cue the existential fear-shivers.

Unmechanical started life several years ago as a student project. It’s already out on many other platforms, but it’s making its console debut with this year’s Unmechanical Extended that features modern graphics and a bonus episode that takes the horrible scenario I painted for you earlier in this review and adds the responsibility of helping your own offspring navigate the dark and scary Unmechanical underworld. If all of this is not sad enough to put you off entirely, then you’re in for a fairly delightful gaming experience.

So, you’ve been ripped from your sad surface life and cast into this strange underground world where you’re watched by who knows what and forced to cast you imaging sensors onto a disturbing amalgam of the technological, biological, and mineralogical. Occasionally you’ll venture back outside only to be presented with horribly alien vistas. All the while you’ll be negotiating a wide variety of environmental and auditory puzzles. Each one is unique and may be as simple as flipping switches or as complex as aligning mirrors to reflect beams of light to a sensor several screens away. They’re generally fair with solutions that seem obvious once you figure them out. Only occasionally did I feel like Unmechanical was being unfair and offering puzzles with solutions I would categorize as the “ass-pull” variety.

Unmechanical Extended’s world design, as I sort of previously indicated, is rich to the point of fueling nightmares (for me, anyway). Technically, the game is 2D, but there are many layers to each areas and even though you can’t move in and out of the layers, they provide a depth that really opens up the game in a thought provoking way. I found myself really curious and a little upset by the things like a huge underground chamber that housed a giant beating heart connected to machines. Beyond the game’s world and art design, the nuts and bolts are solid. It’s not a game with show-offy textures, but it’s very attractive to look at nonetheless. The overall look really reinforces the game’s subtly dark tone.

The game’s soundtrack also lends itself to said dark tone. It’s sparse to the point of nonexistent most of the time with just sound effects and a fairly monotonous aural tapestry that lingers in the background just on the edge of your perception most of the time. It’s not really memorable and you won’t be dying to put it on your exercise playlist but it doesn’t harm the experience either.

Never before have I played such a simple yet oddly profound game. I can’t put my finger on why. There’s no real story or characters. It’s all just left up to your imagination, and my imagination spun a backstory that’s probably a bit more complex than the game deserves. In a way, though, that just makes what would ultimately be a fun, if forgettable, game memorable.

Unmechanical Extending offers gamers a puzzle game with a story told though its setting, more thought provoking than games with hours of pre-recorded dialogue. Come for the puzzles; stay for the hours and hours of time you’ll spend writing Unmechanical fan fiction.