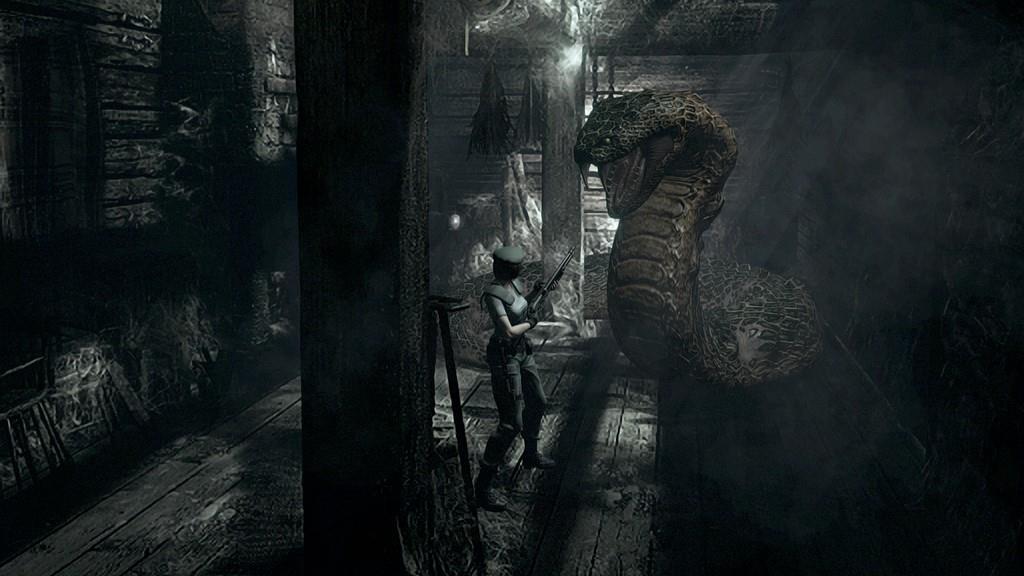 Resident Evil is a difficult game to analyze objectively. It is very much a product of its day, and while it kicked off a multimedia sensation and was partly responsible for the rebirth of the zombie craze, how you view the game depends largely on whether you played it and loved it when it first arrived back in 1996. I didn’t. I’ve tried to get into the original Resident Evil since then; on the PC in the late '90s, with the 2002 GameCube remake, and even the DS port of the PS1 original. I’ve played Resident Evil several times and in several ways and I’ve even loved later entries in the franchise, but objectively I still find the first game very difficult to like.

Resident Evil HD Remaster, the latest version of this nearly 20-year-old game, is actually a remake of a remake; it’s an HD refit of the 2002 GameCube game. The GameCube remake was widely hailed as one of the scariest horror games of all time—a darker, less campy reimagining of the 1996 survival horror classic, that fixed many gameplay issues and refreshed all of the graphics. So, from the start, Capcom is making an HD version of the best Resident Evil port. This may be true, but the game is fundamentally the same thing that came out on the Playstation almost two decades ago, so it retains the same gameplay limitations and antiquated mechanics. If you loved Resident Evil on the PS1 all those years ago, nostalgia will make the HD Remaster feel like a comfortable old pair of jeans. I, however, did not fall in love with the original game, and from my more objective standpoint, Resident Evil still isn’t all that fun or even scary. It feels ancient, clunky and downright frustrating.

Resident Evil was built for the original PlayStation, and in many respects it still hasn’t broken out of that cage. While the PS1 may have wowed gamers back in 1995 with its impressive multimedia capabilities, if you peel back all of the stilted dialogue and FMV cutscenes, you end up with pretty modest hardware, even for the mid '90s. It didn’t help that Sony kept bolting new features to their controller, resulting in no less than three separate rereleases of Resident Evil on the PS1 alone. Resident Evil was originally conceived as a first-person shooter, but the PS1’s control and graphical limitations necessitated that it be scaled back into a dramatic, forced-perspective horror adventure.

This resulted in a bizarre hybrid—half third-person shooter, half cumbersome point-and-click, all awkward. That design philosophy persists in the HD remake and it’s clunkier than ever. The infamous digital tank controls of the original game still rear their ugly head, and while it’s possible to map them to an analog stick in the HD Remaster, the characters are still profoundly difficult to control. This problem is exacerbated on Capcom’s insistence of sticking with the original dynamic camera angles.

The PS1 wasn’t powerful enough to generate fully polygonal environments in the original Resident Evil, at least not to the fidelity and detail that the developers wanted. So, they used a clever workaround: every room, hallway and mad science lab of the Spencer mansion was a pre-rendered backdrop, with polygonal player characters, zombies and important objects layered overtop. This meant every environment had only one or two static viewing angles; admittedly dramatic, but not conducive to tight gameplay in the least. Transitioning between angles is jarring, reversing the directional controls to match the new angle, and characters will often get stuck on smudgy scenery that is hard to differentiate from the rest of the backdrop. 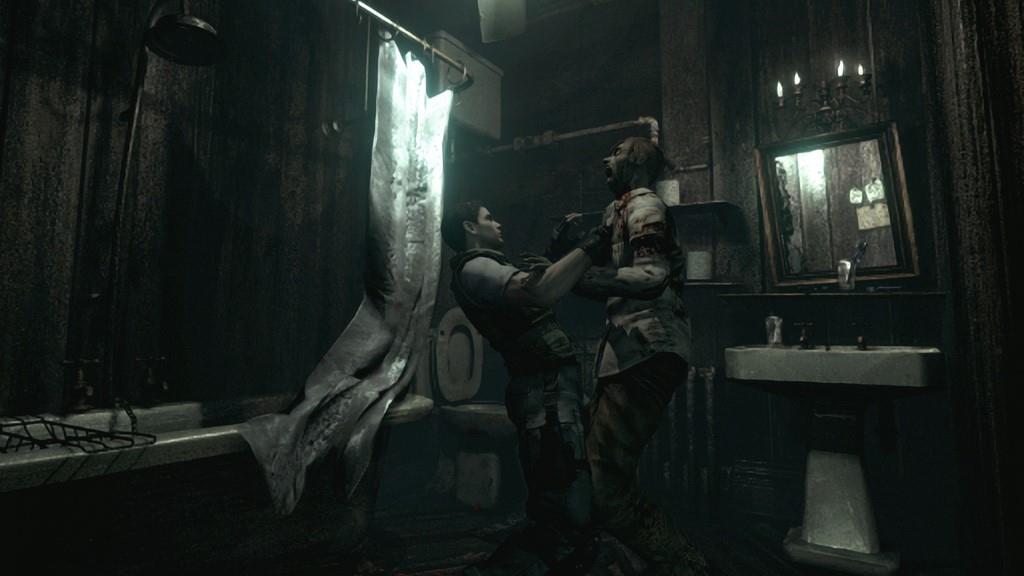 To their credit, Capcom has re-rendered all of the backgrounds in HD for the remaster, complete with dynamic lighting, and it looks amazing, but the old problems remain. I often found myself bashing Jill or Chris against a wall, disoriented suddenly by an angle and control change, or just shooting blindly as a zombie shambled toward me from somewhere off-screen. I will never understand how anyone thought this was a fun way to play a video game. Janky controls and imprecise shooting do not make a game challenging; they make the supposedly battle-hardened STARS combat team look bumbling and incompetent. Conversely, it doesn’t make the zombies scary either; when a monster ended up snacking on me, I was just plain irritated that Jill wasn’t coordinated enough to run away, much less stand and fight.

The awkward controls and primitive rendering technique might be forgivable if Resident Evil didn’t try to be the most tedious pain in the ass from beginning to end. Everything in this game was designed specifically to impede progress and generally make life difficult for the player. A lot of this has to do with the game’s point-and-click roots, but without a dedicated cursor, interacting with the environment is clumsy at best. Save stations require precious ink ribbons so that you not only have to hunt down a typewriter to record your progress, you actually have to ration your saves, too. Character inventories are either tiny or vanishingly small, and there is an abundance of gimmicky keys, macguffins and other fiddly specific items that must be carried back and forth clear across the mansion to move further.

This requires a profuse amount of backtracking that is only complicated by how the enemies behave in this game. If you’ve played the 2002 GameCube version, you will no doubt recall and loathe the crimson heads. Basically, after you’ve blindly emptied two pistol mags into the screen trying to kill an advancing zombie, he isn’t done tormenting you yet. Eventually that zombie will reanimate (again!) as a crimson head: a zombie that is tough, twice as fast and dangerous as a normal leg-dragger. Back in 2002 this added a new wrinkle to the tired Resident Evil formula, but in my opinion it just complicated an already obtuse game. 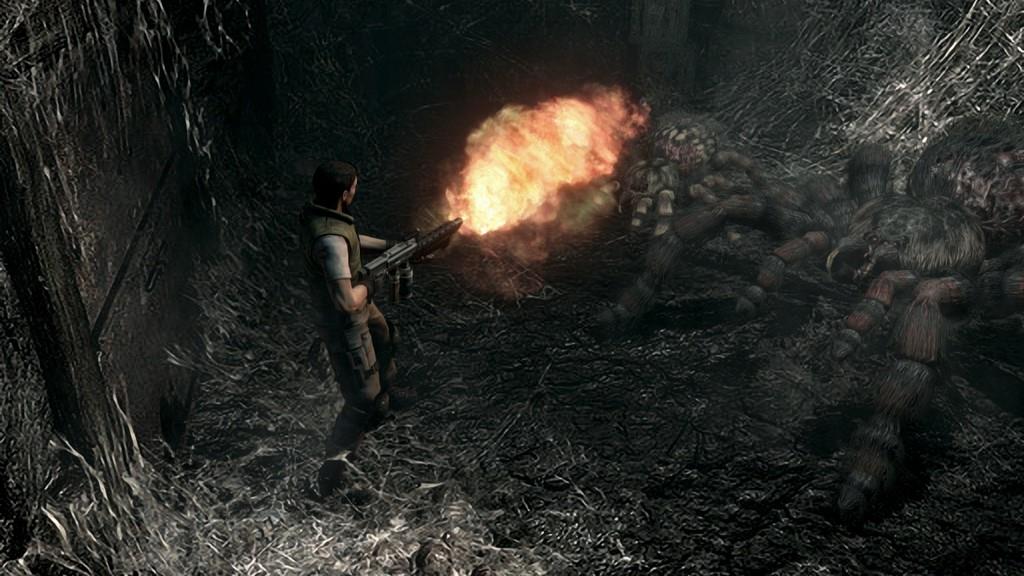 Unless you manage to blast off a zombie’s head while killing it—no easy feat with such wimpy guns and imprecise aiming—you must dispose of its body by incinerating it, to prevent it from coming back as a crimson head. You can do this by carrying kerosene with you—yet another superfluous, inventory-eating item—but you must refill your kerosene bottle at specific locations, and there’s a limited amount in the mansion, so you must use it sparingly…gah! I’m convinced this game is bound and determined to keep me from enjoying it.

The entire game is just like this, especially after you run into the harder bosses and enemies like the reptilian hunters. I don’t mind complex or scary games. System Shock 2 is one of the most user-unfriendly games ever released, but the horror worked and the mechanics made logical sense once you understood them, so I still love it. Resident Evil began life as a convoluted means of overcoming hardware limitations, using those very limitations to make players feel out of control, lost and powerless. But that system only holds up as long as those technical limitations exist. On infinitely superior hardware and in HD, the controls, static camera and cumbersome mechanics really show their age. At this point, Capcom is just piling complication after complication onto an already rickety framework. The game looks and sounds incredible, but once I try to play it, the illusion falls apart.

Putting in an easy mode and re-glossing everything in HD textures does not make this a better game. I’m convinced that unless this was the only thing you had back in 1996, your only reference point for a horror game, nobody would remember the original Resident Evil or its GameCube remake with any fondness. Strip away the rose-tinted glasses and the original Resident Evil—no matter how many HD refreshes and script rewrites it’s undergone—is just a clunky mess. It may have been groundbreaking 20 years ago, but horror games have advanced so far and so fast since then that this gameplay style is nothing less than archaic. But a lot of people drank the PS1 Kool-Aid back in the day, and that’s why Capcom can keep reprinting this relic time and again. 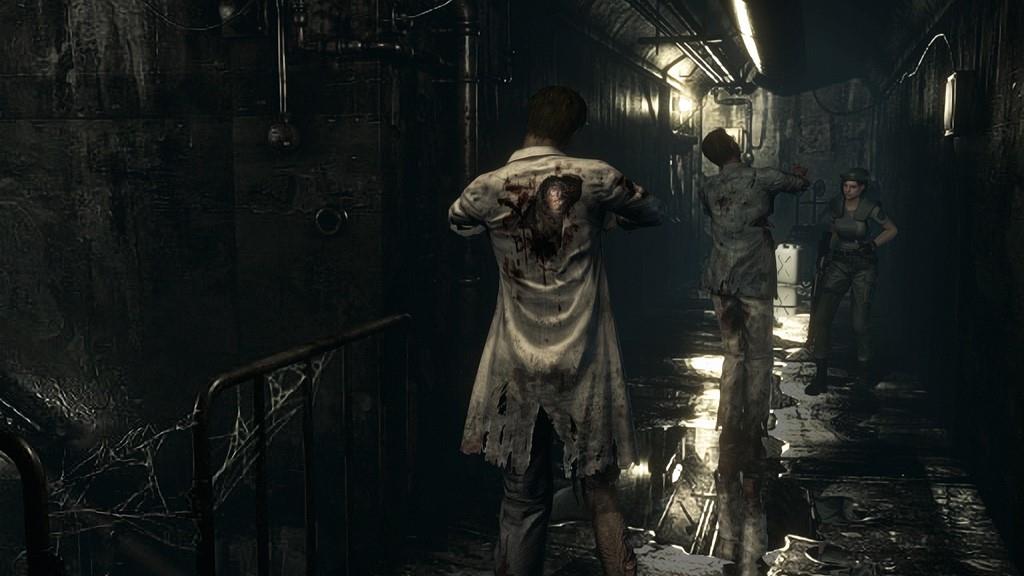 I realize that when it was first released, Resident Evil must have been a revelation. It admittedly does a ton of stuff in one game, and the sheer depth and variety of content, mixed with the glossy pre-rendered veneer and fully-voiced dialogue, must have been mind-blowing in 1996. Like Metal Gear Solid, it was one of the first cinematic video game experiences. The GameCube remake came along soon enough after and reworked, polished and updated enough content to be impressive on its own. It must have been how nostalgic fans wanted to remember the campy, grainy original was really like back on the PS1.

But it’s 2015. Resident Evil 4 came out 11 years ago, and it’s already an infinitely better game than the first Resident Evil ever was. I don’t deny that the setting, characters and monsters of Resident Evil are compelling in a classic horror kind of way. If Capcom is serious about rebooting the series, I think revisiting the Spencer mansion with fresh eyes is a great way to do it. But Resident Evil, for all intents and purposes, must be torn down and rebuilt from the ground up. No more clumsy controls, no more static camera angles and fuzzy pre-rendered backdrops.

Resident Evil has the potential to be a bone-chilling survival horror masterpiece again. With limited resources, more vicious enemies and more sadistic traps, the Spencer mansion could be a real nightmare even with modern game mechanics. But in this case, the old ways aren’t the best. Sometimes, you just can’t go home.

Resident Evil HD Remaster is not a bad game. In fact, it's a beautiful HD up-rez of the GameCube version. But if you didn't like the tank controls, cumbersome gameplay and static camera angles the first time, well, nothing has changed. There are some improvements to aspect ratio and analog movement, but, at its core, this is the same old Resident Evil we've been playing for nearly two decades.